A brief history of Kinngait printmaking 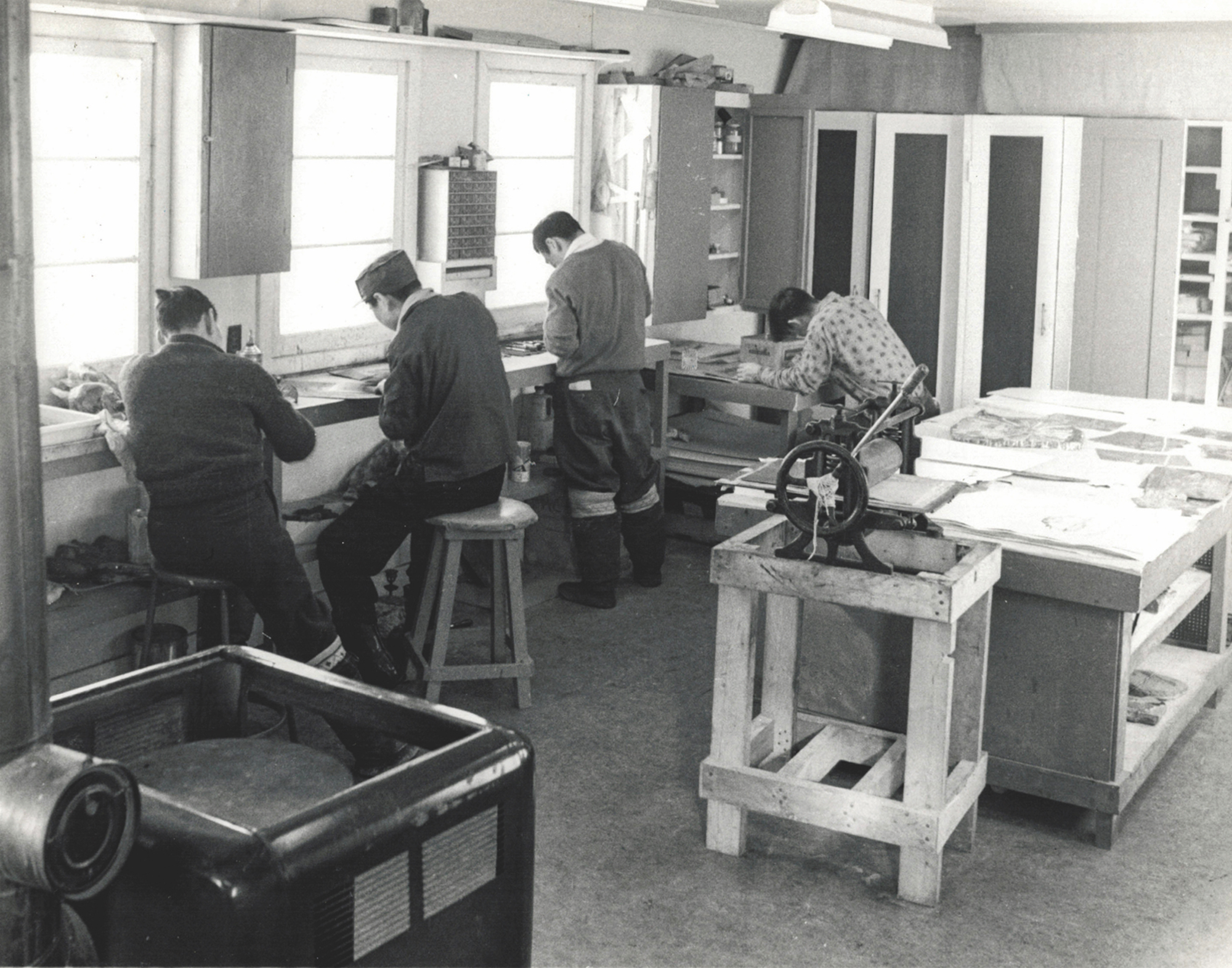 The world-renowned Kinngait Studios has welcomed experimentation and innovation in printmaking for over six decades. Many may be familiar with the story of its infancy, featuring Southern artist James Houston and his wife Alma, who were sent North by the Canadian government in the 1950s to establish an arts and crafts program in Kinngait. But the stars of this story were the exceptionally talented and adaptable Kinngait artists and printers who, upon learning printmaking techniques during the first experiments in 1957, generated 40 phenomenal stonecut and stencil prints for the inaugural Cape Dorset annual print release in 1959, a mere two years later. Today their legacy continues as a new generation of artists and printers carry on the legacy that began with their parents, grandparents, and great-grandparents in the 1950s.

The 1950s marked the experimental days of the fledgling studio, and the first print shop was small but mighty. At 512 square feet, the studio was referred to as sanaunguabik: a place to make small things. [1] Icons like Kenojuak Ashevak were producing fantastically imaginative drawings that would be later translated into luminous stonecut prints. The first prints were linocuts and eventually evolved into the stonecut—a Kinngait adaptation of Japanese woodblock printing. The use of stone made sense, it was a local natural resource which many artists with background in carving were already familiar with. Artist Kananginak Pootoogook was central to the printshop’s foundation years and served as the Co-op’s inaugural president. He described the process of making the first prints:

“We first tried printmaking by using linoleum which was stuck to a piece of thin wood and when the glue was dry we would copy the design onto the linoleum with tools. When the design was finished it was inked and then paper was laid on top. This was rubbed well with a small spoon, and when it was well impressed the paper was removed. If it was satisfactory we made twelve copies. […] We also tried using small pieces of soapstone to see if it was better than linoleum, and so we made our first prints on stone.” —Kananginak Pootoogook [2] 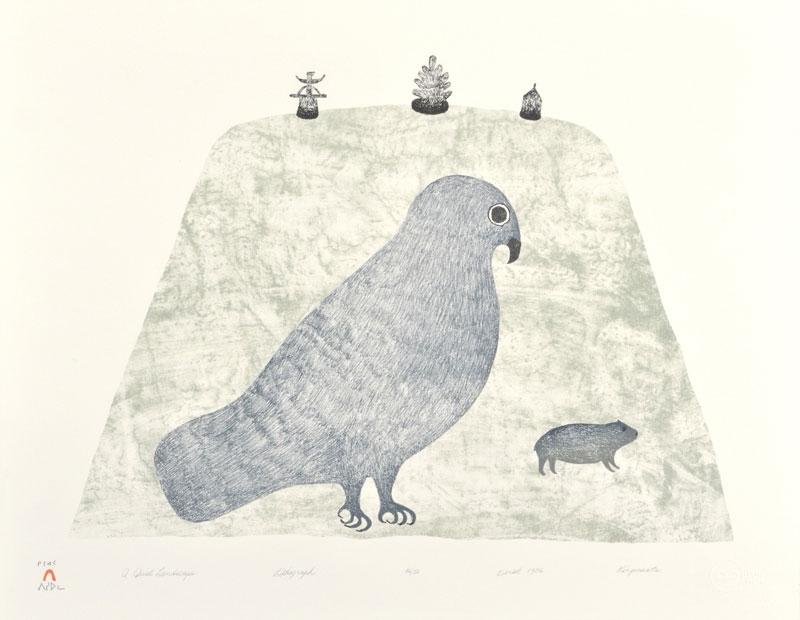 Terry Ryan joined the printshop in the summer of 1960 as Houston’s temporary assistant and was later hired as the studio’s first general manager. He introduced engraving and etching, printmaking techniques wherein artists could work directly on a plate as opposed to making a drawing that would be translated by a printer onto the stonecut slate. In 1961, the first engraving was made by artist Kiakshuk. Stencil was also used frequently, though sealskin was not used as advertised to Southern audiences—waxed Bristol board proved the more efficient option. Sealskin stencils did exist, but they were rare.

In the 1970s, lithography was introduced to the Kinngait Studios. Ryan acquired both lithography and Vandercook proofing presses and several Southern lithographers made the trip to Kinngait to train a specialized team of printers. The studio also had a brief stint with typography and produced the superb publication The Inuit World , before closing-up the type shop for good. Lithography, however, remained and continued attract Southern artists. Names like Michael Snow, Joyce Wieland, Les Levine, Toni Onley, and William Kurelek travelled North for collaborations at the Kinngait studios. Toronto-based artist K.M. Graham facilitated experiments in acrylic painting which involved artists Lucy Qinnuayuaq, Pudlo Pudlat, and Kingmeata Etidlooie. These artists later incorporated the new technique of painting with a brush into their own prints. 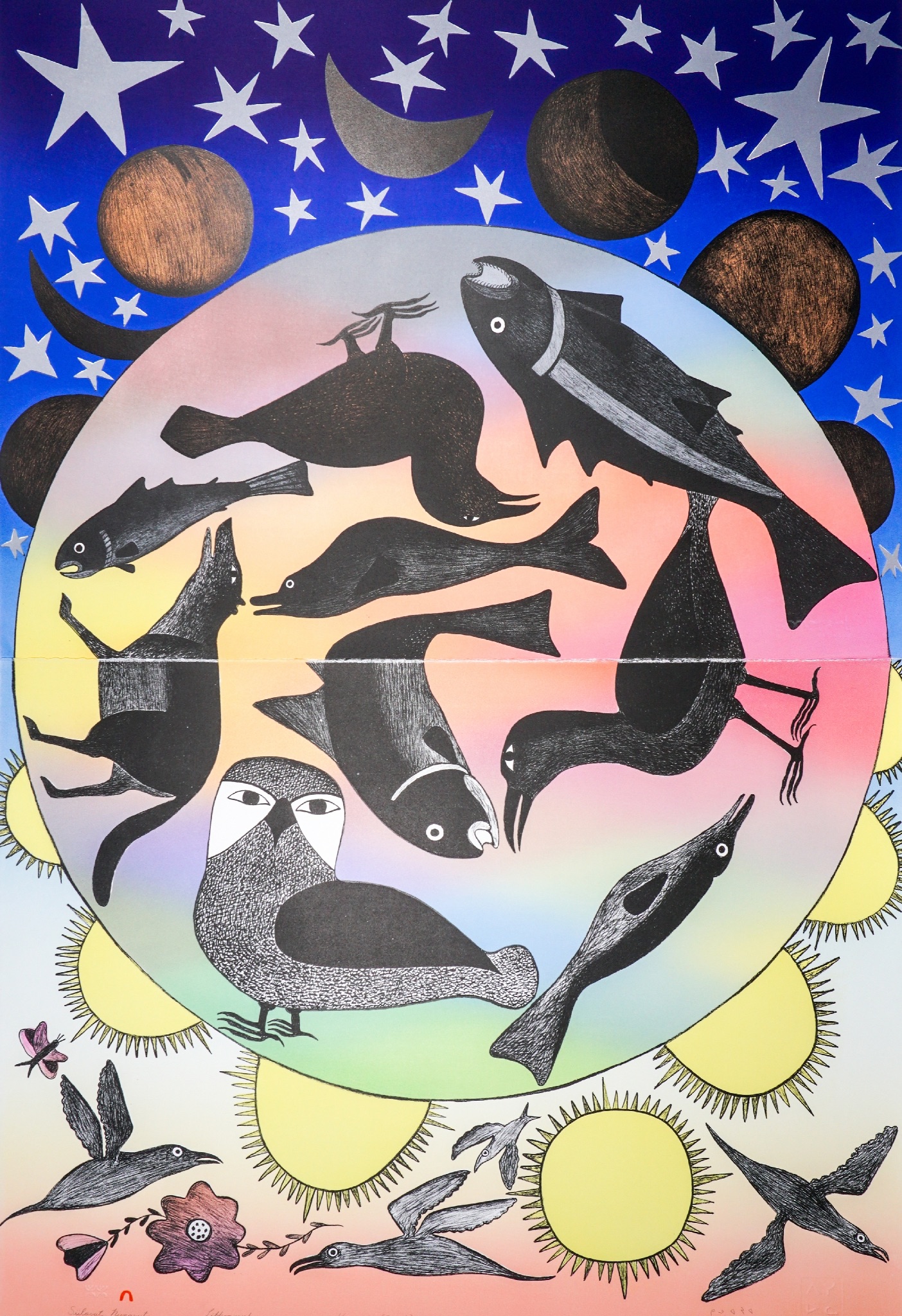 In 1990, Pudlo Pudlat became the first Inuit artist to have a solo exhibition at the National Gallery of Canada in Ottawa. Back up North, printmaking innovation continued. Ryan invited Montreal printer Paul Machnik to the Kinngait Studios in 1994 to re-introduce etching techniques to the artists. This time aquatint was involved, incorporating vibrant washes of colour to etched images. Machnik also facilitated oil stick drawing workshops during these years, a medium that combined the aesthetic of oil paint with the familiarity of a drawing stick. These new techniques of the 1990s resonated particularly well with artist Sheojuk Etidlooie, whose etching and aquatints were featured prominently in the annual print collections from 1994–1999. The year 1999 also marked the formation of Nunavut as its own territory (formerly the Northwest Territories), and the establishment of an Inuit-led government. Kenojuak Ashevak’s monumental diptych Siilavut, Nunavut (Our Environment, Our Land), 1999 celebrated this important moment in Canadian history.

The new millennium marked the rise of a new generation of artists: Shuvinai Ashoona, Annie Pootoogook, Itee Pootoogook, Tim Pitsiulak, and more. They began to see work that they started in the 1990s come to fruition in the form of prints. Some Kinngait artists also began to travel internationally: Annie Pootoogook and Padloo Samayualie completed residencies at the Glenfiddich Distillery in Scotland and in Brooklyn, New York, respectively. Tim Pitsiulak went South to learn silkscreen printing at Open Studio in Toronto. During this time he produced Swimming Bear, 2016, a rare and stunning silkscreen on black paper.

Eventually, drawing caught on, and for the first time since the mid-1950s resurfaced as a popular medium at the Kinngait Studios. Annie Pootoogook won the Sobey Art Award in 2006, and her success encouraged more drawing experimentation at the studios. 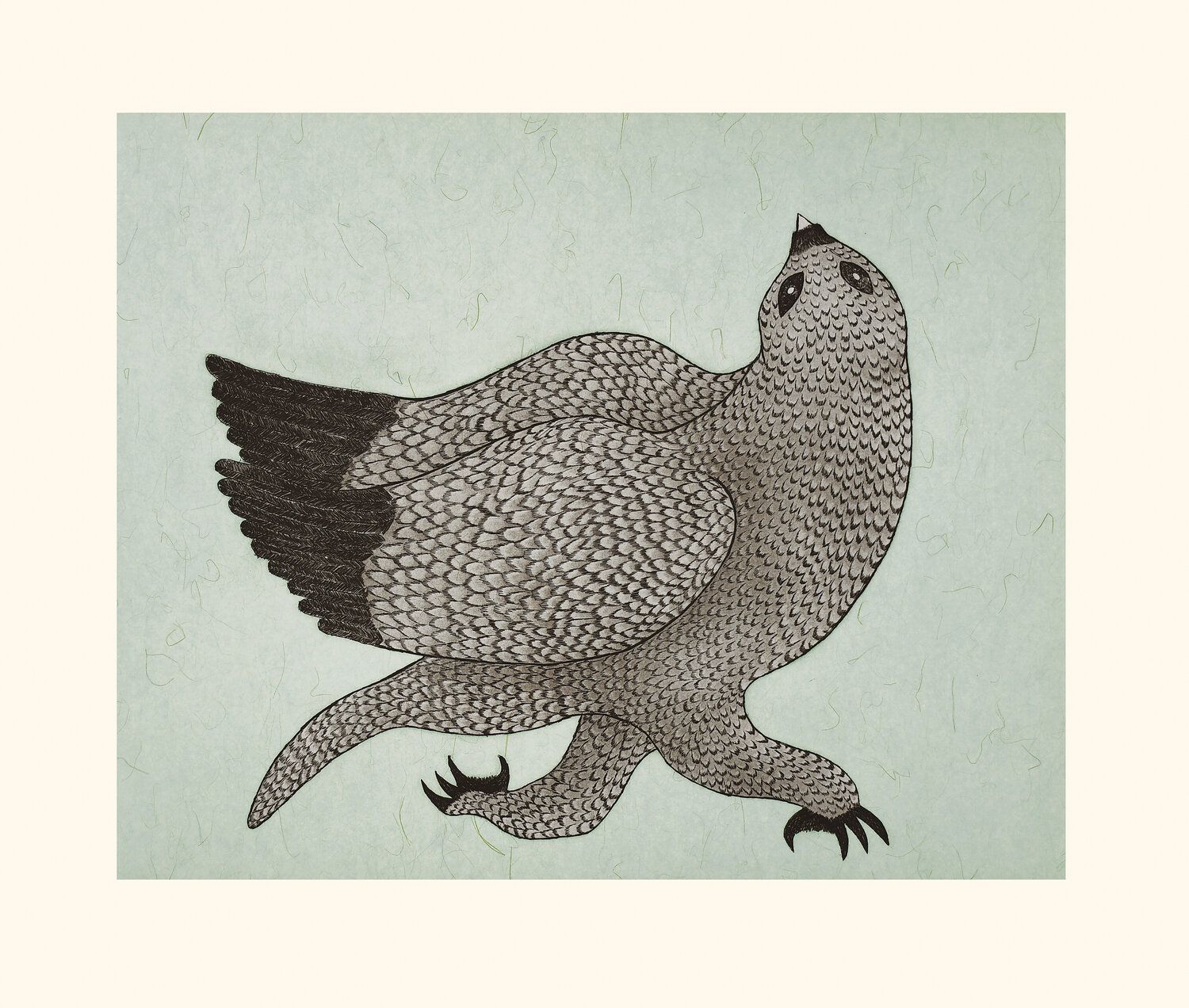 This reinvigorated elder artists like Ohotaq Mikkigak, who returned to the studios after an almost 40-year hiatus. He found inspiration in younger generation artists like Shuvinai Ashoona, who were working with coloured pencil on large scale paper. Other first-generation artists like Kenojuak Ashevak and Kananginak Pootoogook, continued to produce work until the very end of their lives. Along with the success of drawing, printmaking of all varieties has continued on into 2021 with Ningiukulu Teevee and Quvianaqtuk Pudlat producing some of the most sought-after graphic works today.

Today in 2021, things have changed since the first printmaking experiments of 1957. The print studios are now housed in the Kenojuak Cultural Centre, a 10,000 square foot space where community meetings and exhibitions are held. Techniques and subject matter continue to evolve and innovate over time, as the artists and printers of Kinngait Studios work diligently in collaboration to produce phenomenal prints, year after year, and to maintain an extraordinary legacy that began with their parents, and grandparents over six decades ago.