If you are familiar with Inuit art, you would be familiar with the stonecut print. This particular type of printmaking is unique to the Canadian north, utilizing stone to create the printing plate. The method itself is akin to that of linocut or woodcut, where a negative relief image is cut into the plate, inked, and printed. In fact, linoleum was used during the earliest printmaking experiments in the 1950s only to be replaced shortly thereafter by the stonecut and stencil methods which dominate the early print collections.

“We first tried printmaking by using linoleum which was stuck to a thin piece of wood and when the glue was dry we would copy the design onto the linoleum with tools. When the design was finished it was inked and then paper was laid on top. This was rubbed well with a small spoon… If it was satisfactory we made twelve copies. […] We also tried using small piece of soapstone to see if it was better than linoleum, and so we made our first prints on stone.” [1] 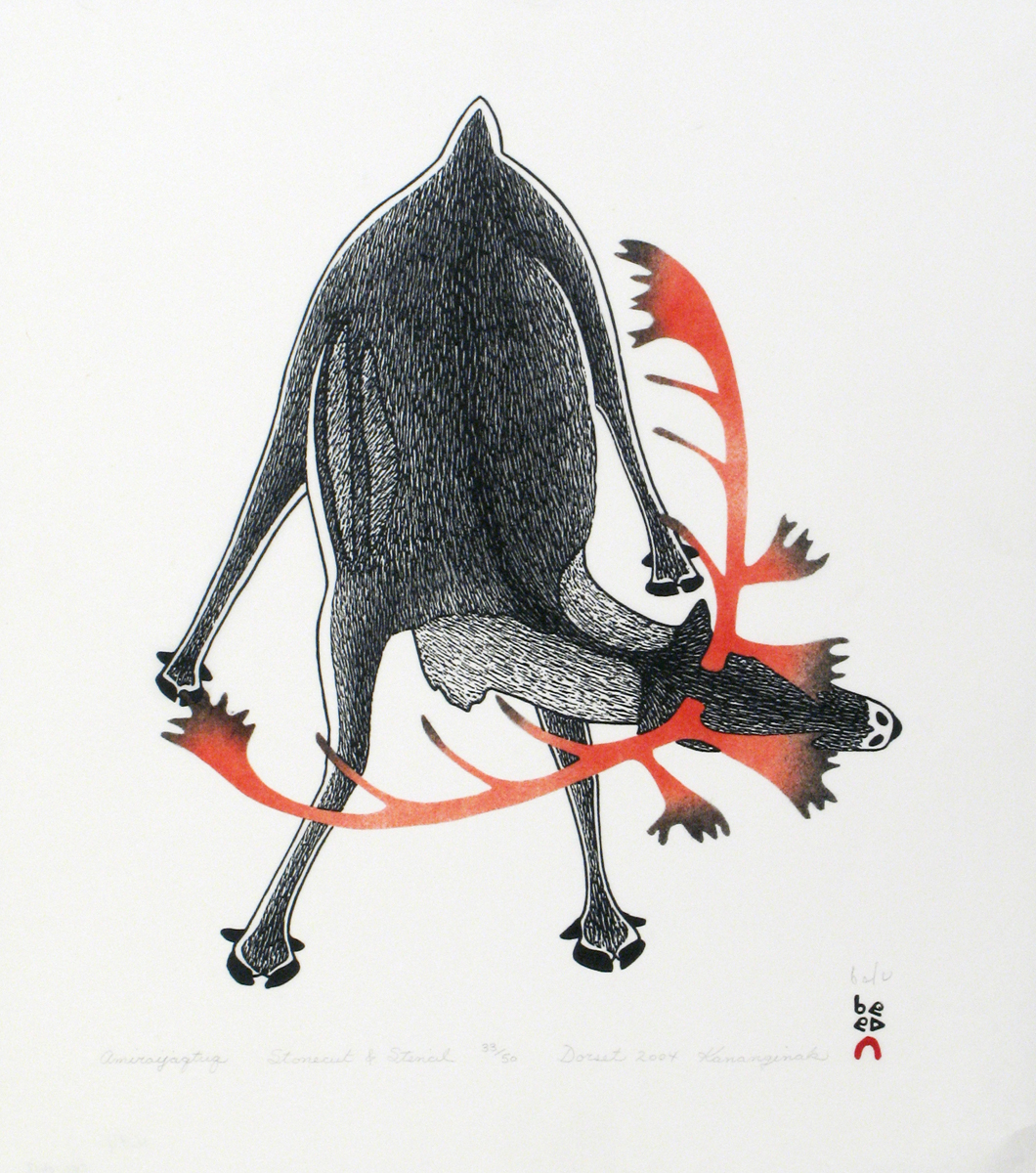 The stonecut printmaking process is a skillful collaboration between artist and printer. First, the artist creates a drawing which becomes the basis for the print. The drawing is then traced and applied to the surface of the stone slate (the “printing plate”). A stonecutter cuts away a negative relief of the image – these are the parts that do not appear in the final print – defining forms and bringing the image to life. Sometimes stonecutters lightly carve small sections away to give the forms texture, like feathers on the bust of a bird, or fur on the body of a caribou.

Once complete, the carved relief image is inked with ink rollers to achieve flat, crisp layers of colour, and sometimes gradients. A thin paper is then laid on top, often a hand-made Japanese paper, and is carefully pressed and smoothed against the stone to register the inked image. In addition to the printer’s proof, artist’s proof, and studio proof, the image is registered fifty times, and sometimes more or less if part of a special release. Producing a stonecut print edition is a painstaking process involving much patience, time, and care.

Some artists double as trained printers and print their own images drawings, having the unique opportunity to operate the entire process through from conception of the drawing to printing the stone. Kananginak Pootoogook, Qavavau Manumie, and Cee Pootoogook and are among the few who worked and continue to work as artist-printers in the Kinngait Studios.