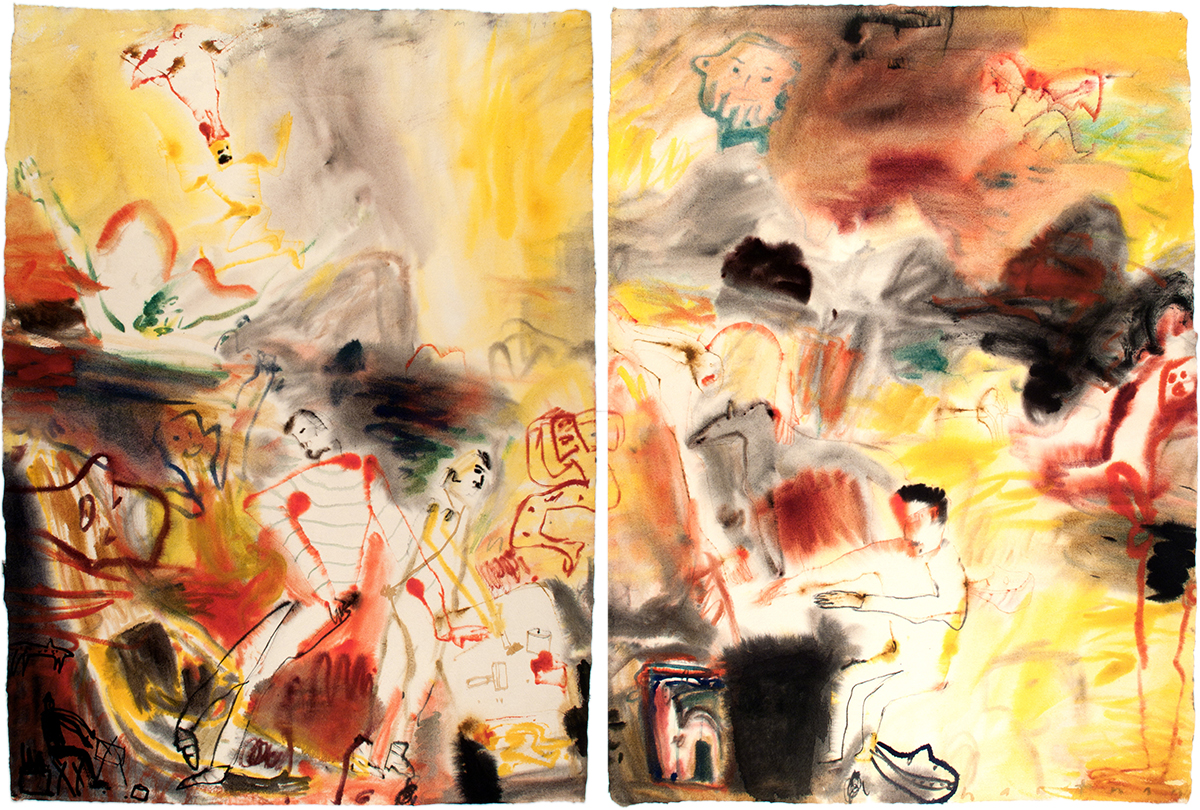 In November 1989 I spent a month in Cape Dorset, as a visiting artist and guest of the West Baffin Eskimo Co-Operative.  It was a wonderful experience for me. I loved the barren landscape, the strong and clear forms of the surrounding mountains. I was captivated by the hunters who were dragging their boats with skidoos across the harbour ice to open water.

I have had a lifelong curiosity about the relationship of people to the landscapes that surround them. I saw so many people that were at home and graceful in their landscape as they cleaned seals on the pebble beach, fixed their skidoos in their yards, made carvings in their polyethylene tents and worked in the Kinngait studios. I was also curious to see a community where art played such a central part of the community’s cultural, social and economic life.

I immediately started to sketch what I saw and at nighttime I worked in the lithograph studio, making big pastel drawings.  Bill Ritchie, who was running the lithography studio, asked me to make a print with him, a reduction litho which was a first for me.

I am sure that Terry Ryan saw these artist residencies as something that would benefit the artists in the community as well as the visiting artists.  While I was working in the lithograph studio Kenojuak Ashevak, Napachie Pootoogook and Mary Pudlat were drawing on the litho stones every day. My artwork was probably not a source of inspiration to these senior artists, but it was certainly a source of humour as they giggled each morning at my pastel drawings from the previous night. But it was the next generation of artists that Terry had his eye on, with the hope that some would find inspiration in their life experiences, even if these were limited to life in the community, in the way that the older generation found inspiration in their life on the land.

Still I don’t think that anyone fully anticipated the creative flowering of the next generation that, some ten years later, gave us artists such as Annie Pootoogook, Shuvinai Ashoona and Qavavau Manumie.

In 1989, the Kinngait Studios in Cape Dorset on Baffin Island had been in operation for over 30 years.  The one room studio building which housed stencil and stonecut printing facilities released its first annual print collection in 1959, under the wing of the West Baffin Eskimo Co-operative. Sculptures were purchased and shipped to the South. Artists also brought in drawings which provided imagery for the budding printing studios. From the early 1960’s on, under the guidance of artist and general manager Terry Ryan, the Kinngait Studios grew with expanded facilities and the addition of a new lithography studio in the mid-1970’s. 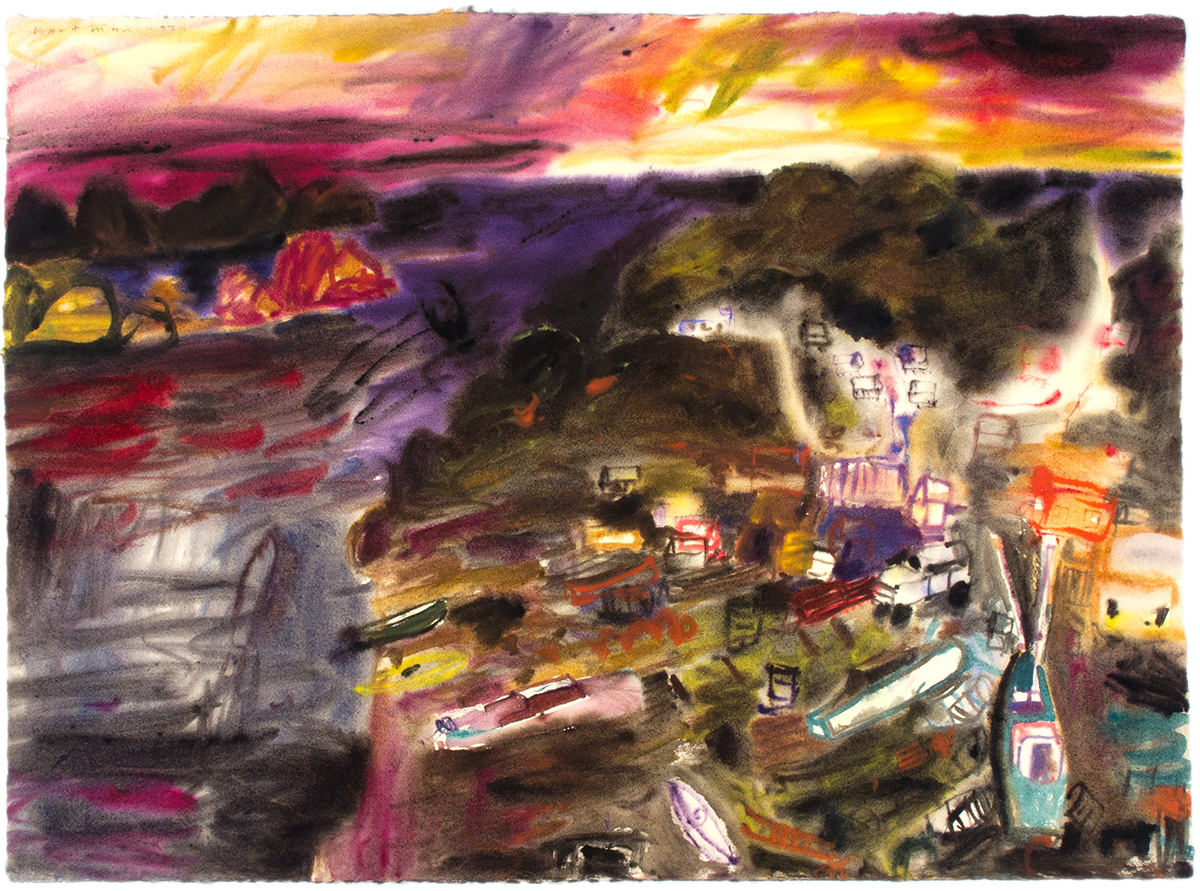 From its earliest years, the studios sought to provide new opportunities for artistic expression. The introduction of new printing methods, different media and workshops by visiting artists became an integral part of the creative atmosphere. Despite their location in an isolated settlement on south Baffin Island, the Kinngait Studios hosted many visiting artists and printmakers who either led workshops or worked alongside the Cape Dorset artists.

When John Hartman arrived in the fall of 1989 to conduct a printing workshop, both studios were creative and energetic hubs of activity. The recently released 1989 annual print collection contained 30 images, and the studios were busy with production with the same number of prints for the 1990 fall release. The printers were experts at their craft, translating images from the artist’s drawings into superb editions.    Some artists preferred to draw at home while others worked in the studio. However,  all came into the studio to draw on the lithograph stones. For the printmaking workshop led by John Hartman the studios hosted artists from other Arctic settlements, such as Simon Tookoome from Baker Lake. At the close of the workshop, Hartman remained in residence to create a reduction print with Bill Ritchie, resident master lithographer.

In the 1990 print catalogue, Terry Ryan noted that younger artists, including printer Qavavau Manumie, were for the first time creating and printing their own images. The unique imagery of Pudlo Pudlat and Kenojuak Ashevak was contemporary and imaginative, while elders Osoochiak Pudlat and Tikitu Qinnuayuak remained inspired by the past. Mayoreak Ashoona created family portraits on the land, while Napachie Pootoogook‘s drawings ranged from intimate traditional family scenes to the harsh reality of women being forced to marry despite their wishes. Social and economic change for this generation are illustrated by the contrast between Mary Pudlat’s drawing of traditional life on the land (Drying Char) and her depiction of artists (In the Art Studio) with text telling of the decline of the fur trade and the switch to a new economy powered by art production.

The artists who worked alongside John Hartman in 1989 were primarily from a generation of people who had spent their early years in the traditional migratory lifestyle before settling in Cape Dorset. It was this lifestyle that predominantly informed the imagery found in their drawings. Hartman’s drawing style and imagery was very different from those created in Dorset at the time. Over the next several decades, younger generations experienced a change in lifestyle. Gradually the traditional narrative content shifted to the rise of individual expression, such as is found in John Hartman’s work. This change is evident in contemporary drawings from Cape Dorset. The imaginative creations by Shuvinai Ashoona, the expressive and unique drawings by Jutai Toonoo, and the love of colour and line found in works by Qavavau Munamie bear witness to the change.