This exhibition presents a very special body of work by the Cape Dorset graphic artist, Napachie Pootoogook (1938 — 2002). Late in her life, and motivated in part by her failing health, Napachie decided to tell the stories of her life and times: her local history, her personal experience and the stories of other people and events — both true and legendary. Employing her years of experience as a graphic artist, she illustrated her stories — sometimes on multiple sheets — and incorporated into each drawing a section of syllabic text to explain the circumstances and the people depicted. No artist in Cape Dorset had ever done anything quite like this before.

Napachie’s drawings refer eloquently to a time of profound transition in the lives of the ‘Sikusilaarmiut’ — the people of the south Baffin coast where Napachie was born in 1938. She grew up during the waning years of the traditional camp system, when Inuit gradually relocated to permanent communities established around the existing Hudson’s Bay posts. Napachie experienced first-hand the hardships brought about by the collapse of the fur trade during the Depression years, and the shortages then caused by World War II. The world she presents in many of these drawings is unpredictable, unforgiving and frequently tragic.

Napachie’s forthright text and clear, elegant drawing style make it possible for her audience to understand and appreciate a way of life inconceivable to most southerners. Starvation, for instance, was a terrible reality, sometimes leading to infanticide and cannibalism. Seemingly impossible choices and decisions sometimes had to be made, particularly when a member of the camp became disruptive and dangerous. As Napachie stated in one of her last interviews, “there were no emergency lines, and people lived in isolated camps where they were solely responsible for the survival of the camp. They had a hard life.”

Napachie was particularly attuned to the experiences of women, and spoke candidly in these drawings about their collective suffering at the hands of dominant and often dangerous men. Arranged marriages were still customary when Napachie was growing up, and she made several powerful drawings of both herself and other women being taken in marriage against their will, in her own words, “struggling with all their might.” 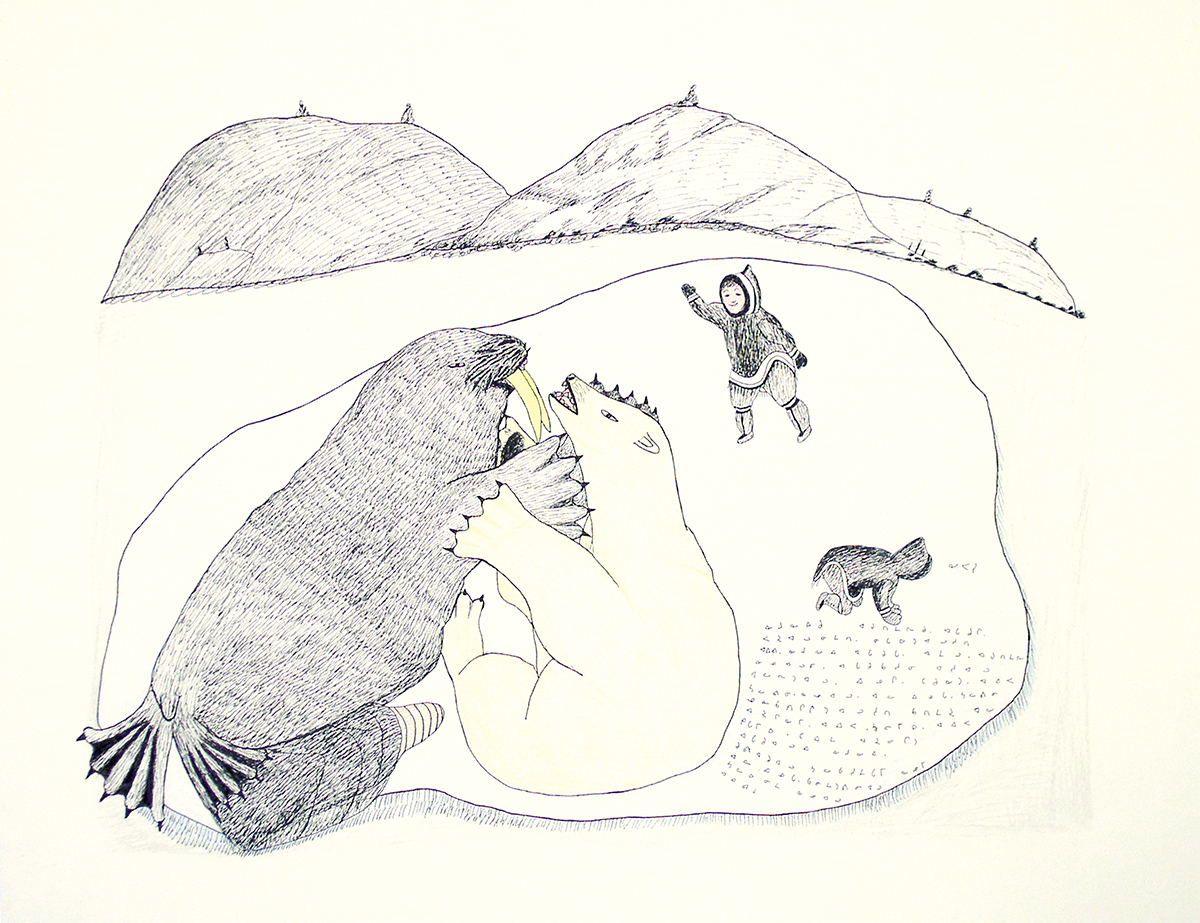 Leadership and co-operation were essential to the survival of camp members, and several of Napachie’s drawings feature the powerful south Baffin leader Attachialuk and the epic rivalry between him and Kininiq from the Arctic Quebec coast of the Hudson Strait. The two personalities have come to embody the traditional rivalry between the two regions or “sides”, echoes of which are still felt to this day.

Many powerful leaders were also shamans, and Napachie has done several drawings featuring shamans well known to ‘Sikusilaarmiut’, including her paternal grandfather, Namonai. Shamanism was not a religion and ‘angakkuit’ (shamans) were not priests, but more akin to specialists who dealt in the most dangerous, unseen powers of the world. Although there were “good” shamans — like the couple Alariaq and Aliguq — in Napachie’s view, most were people to be feared. Inuit of her generation associate the disappearance of the shaman with the coming of Christianity.

References to Christianity and its early influence are evident throughout Napachie’s drawings. Widely accepted by the time Napachie was born, Christianity’s perceived power guided men like Attachialuk and Kininiq in battle, and “saved” others like Napachie’s grandfather, Namonai. Some individuals viewed themselves for a time as “prophets” of the new religion, and convinced people to rid themselves of their material possessions, arguing that they would only weigh them down in their ascent to heaven.

Many of Napachie’s stories were told to her by her mother, the late Pitseolak Ashoona, who also used drawing as a way of expressing what she referred to as “the old Eskimo ways”. Napachie also thought of herself as a local “historian” and took pride in her memory and in her ability to visualize these stories. Beyond her desire to communicate her way of life to an outside audience, Napachie’s work also constitutes a record of local history, customs, folklore and social relationships that will now not be lost to future generations. Napachie noted in her last interview with me that her children and grand-children were amazed by her drawings: “They ask questions and I tell them the stories,” she said. “There is so much that happened to me and to people I have known or heard about; it is almost overwhelming. There is so much that people know.” 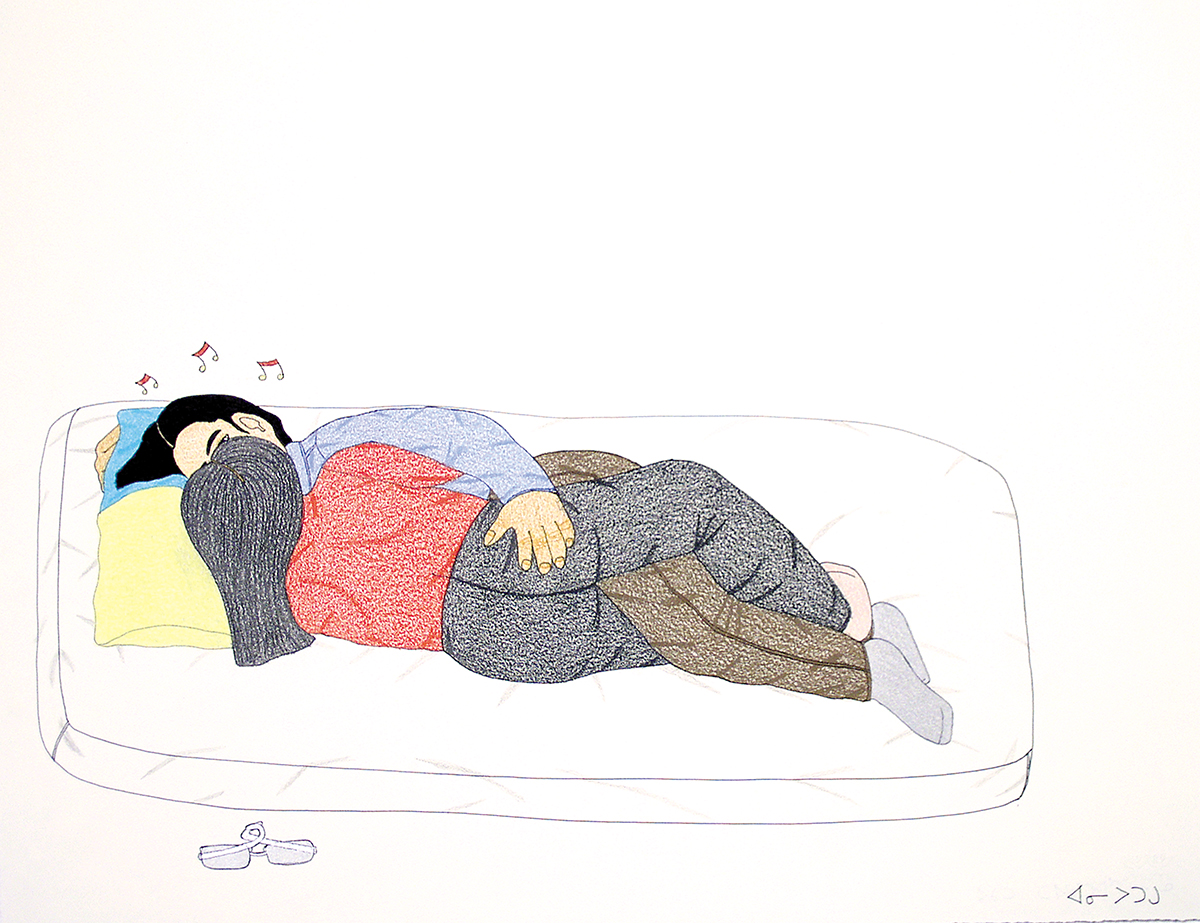 Annie Pootoogook comes from a long line of artists. In particular, her grandmother Pitseolak Ashoona, and her mother Napachie Pootoogook were both prolific and masterful graphic artists. Despite enormous stylistic differences, there are similarities in the drawings of all three artists.

All three women drew on personal experience to guide their artworks. Consequently, these images provide an intimate view into the artists’ own lives and broader life in Cape Dorset. By depicting everyday scenes, relatives, and common beliefs, their work exudes a sense of recording history, a feeling of archiving experience.

Pitseolak concentrated on subject matter that showed the more joyous side of traditional life, characteristic of graphics by artists of the older generation. However, her daughter Napachie, in later life, decided to draw and speak about all aspects of traditional life, including spiritual beliefs and darker social issues. It is this tradition which is carried on by Napachie’s daughter Annie.

Annie has developed her own unique style. Her artistic approach is fascinating; she captivates the viewer with an intense attention to detail, and sprinkles contemporary references, often mundane, throughout her compositions. She treats all subject matter, joyous and tragic, with the same attention to detail. Annie’s most recent works demonstrate a new focus. She still nurtures the “picture perfect” character of her images, but now she aims for a greater balance between architecture and figures.

Similar to her mother’s work, memories of the past permeate Annie’s drawings. Time-markers such as wringer washers and matchbox houses signify the past, but she also recalls darker history and does not shy away from difficult issues. On the contrary, she addresses matters of spousal abuse and death directly. These delicate topics are part of the diverse subject matter of Annie’s oeuvre.

Scenes of families and friends spending time together, particularly at mealtime, are prominent in Annie’s drawings. Past and contemporary practices intersect here: fresh seal is brought home at the same time as grocery store items; a young boy fetches ketchup to add to his fresh-caught meat; and people set up a tent equipped with a Coleman stove and camping fuel.

Games and community activities are central to Annie’s representations of Cape Dorset. She often juxtaposes ‘’old” and “new” pastimes, providing a unique perspective on their coexistence in the modern Arctic world.

Television. Current Events. Telephones. Clocks. Planes. Cameras. These contemporary insignia emerge from Annie’s drawings as temporal reference points, and they function as a common thread between her works. The constant presence of these objects from daily life in Cape Dorset confirms their iconographical importance to Annie.