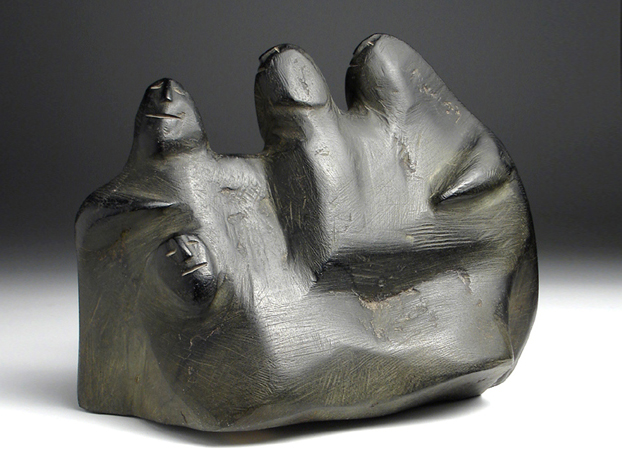 “What type of stone is this?” is one of the most common questions we receive about sculptures, and it’s a good one. While many think of Inuit sculpture as synonymous with “soapstone” (the name given to a specific type of soft stone), artists across the Arctic in fact use a variety of local stone types that are available in their community, and a lot of it certainly isn’t soft! The natural state of the stone is incredibly important for artists. Master sculptors Pauta Saila and Oviloo Tunnillie, for example, have cited that the hardness and shape of the stone had an influence on guiding their hand and creative vision:

“I make one particular carving now though with different motions, the Dancing Bear. I carve them the way the stone suggests.” —Pauta Saila, 1993 [1]

“It can be very difficult to sculpt the idea that you have in your mind. If your idea doesn’t match the shape of the stone your idea may have to change because you have to accept what is available in the rock.” —Oviloo Tunnillie, 1999 [2]

Not only does the hardness and shape of the stone vary from region to region, but so does its colour, weight, and its ability to be polished. These characteristics vary according to what has been quarried locally and sometimes shipped in from other communities. Here’s a brief breakdown of four types of stone commonly used in Inuit sculpture, where they come from, and how they work: