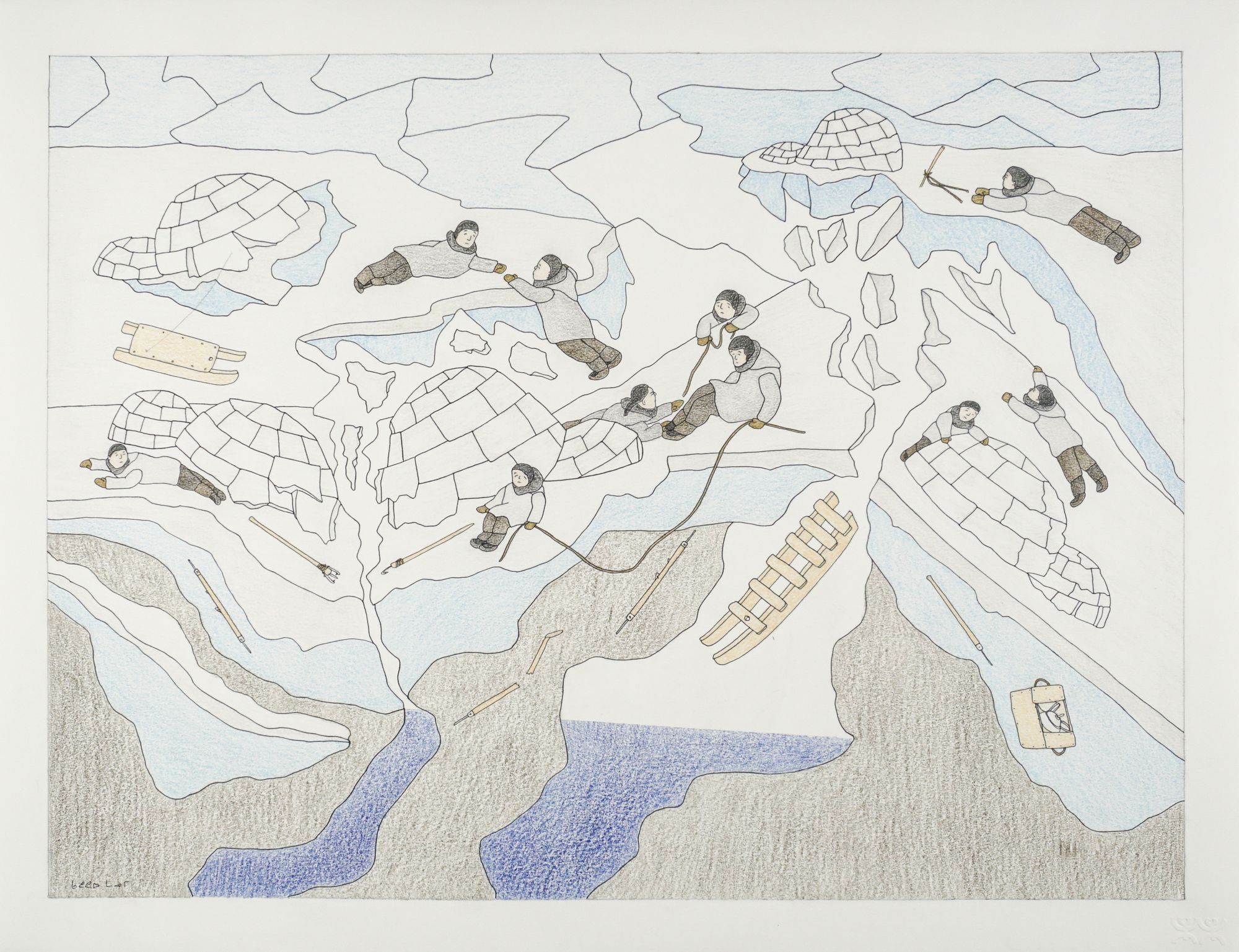 Thin Ice, a solo exhibition of primarily new drawings by Qavavau Manumie, explores contemporary issues of climate change in the Arctic. Based in Kinngait, Nunavut, Manumie is a long-time observer of environmental shifts in his home community and how it increasingly affects the land, animals, and people of the circumpolar north. In keeping with his signature playful and illustrative drawing style, Manumie’s work also combines local Arctic flora and fauna with stylistic abstract forms in eye-catching ways.

The theme of “thin ice” takes shape both literally and figuratively in the exhibition. Ice is often cracked or broken in Manumie’s drawings, reflective of the current reality that the ice floe takes longer to freeze in the fall and is quicker to melt in the spring. Manumie’s images of people stranded on broken ice caution of dangers that lurk—and have already occurred—as climate change interferes with local knowledge of the land and weather. In Composition (Beluga Gathering), the remnant tracks of a snowmobile leave indents in the broken ice, ominously hinting at the fact that someone had to evacuate quickly. The belugas, startled by the noise, have come to investigate the scene, weaving in and out of the cracked floe.

Manumie also sheds light on the animal perspective. In Composition (Strange Fish), an Arctic char encounters a species of fish never-before-seen and decides to move them away. As waters warm and foreign fish migrate to new locations, local species like the char become threatened. In a similar vein, the drawing Composition (Doomed Bear) also conveys the fragility of nature’s order. A polar bear finds itself in a predicament when a massive whale breaks through the ice floe, thrusting the bear in the air. Known as the Arctic’s largest natural predator, this incident flips the script: the frightened little bear now finds itself facing a much larger mammal. Through such imaginative and hypothetical scenarios, Manumie eloquently alerts us of the cautionary tales associated with climate change. Though often veiled with humour and wit, his drawings double as an ominous reminder that our planet is teetering on thin ice, and it’s time to take notice.

Qavavau Manumie (b. 1958) has lived in Kinngait (Cape Dorset) for most of his life. Known for his intricate compositions in ink and coloured pencil, as well as his skills as a meticulous master printmaker, Manumie’s work ranges from the very literal to the more expressive. His thematic concerns include depictions of Inuit legends and mythology, local wildlife, and the contemporary realities of climate change in the Arctic. Manumie’s work sits in public and private collections in Canada and internationally. His drawings continue to be shown in major exhibitions on the international stage, most recently at the 2022 Biennale of Sydney.