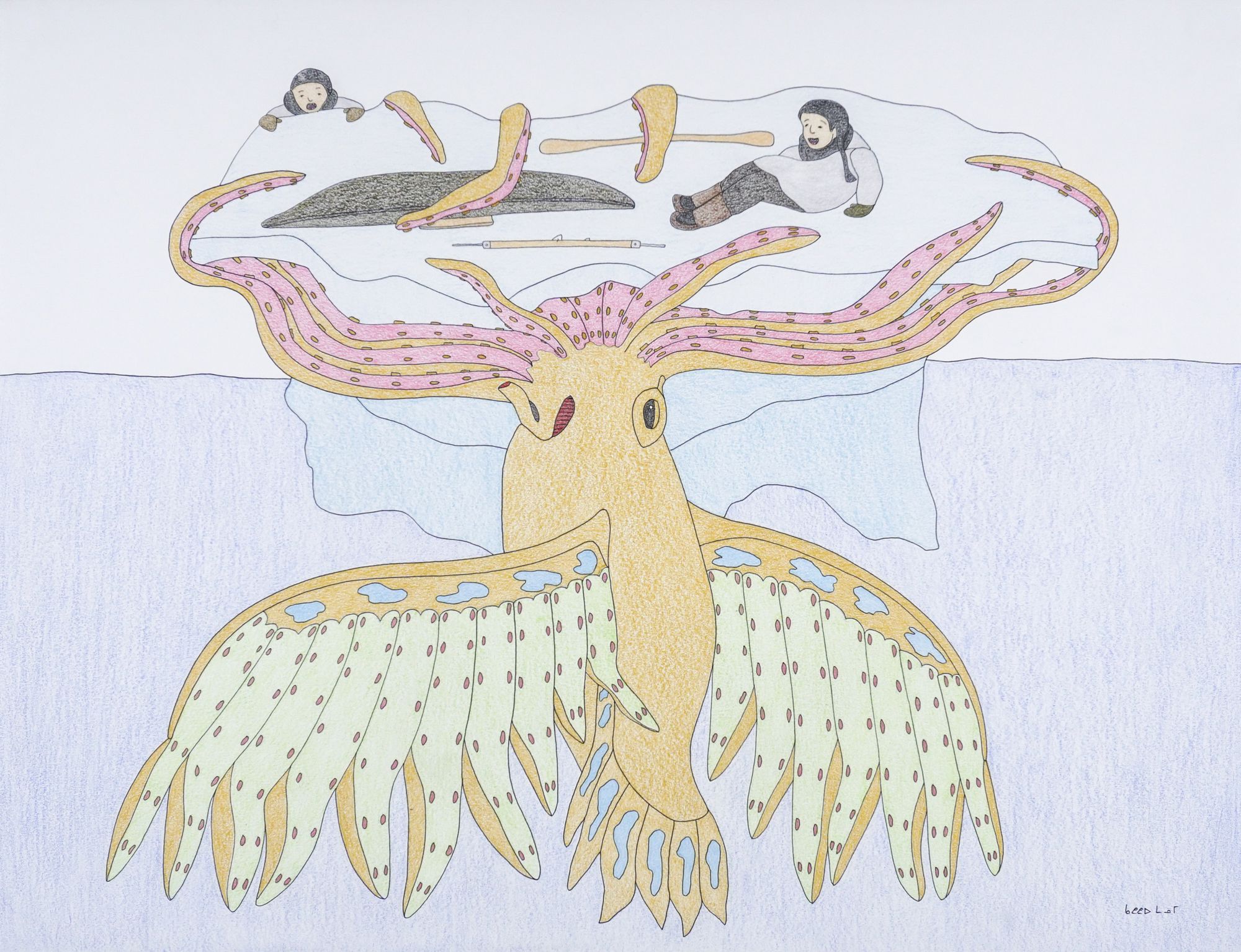 Since the 1950s, the theme of the transformation has featured in sculptures, prints, and drawings by Inuit artists hailing from many communities across the Canadian arctic. Depictions of human figures intertwined with animals have permeated the art form in various styles and media, captivating audiences for decades. While many admire the creativity and spirit that emanates from such pieces, the background of what exactly a transformation is sometimes is lost. In this blog post we hope to shed light on the topic through using the work of some of our exceptional artists as examples.

A transformation can be described as the spiritual metamorphosis of human into animal, or between various animals. Transformation subjects in Inuit art often include shamans, bears, birds, sea animals and other figures and is a recurrent and powerful subject in Inuit spirituality. Transformations of humans into animals, or between one animal and another, fill traditional Inuit stories from the era of nomadic life on the land in the arctic. Today, transformations appear regularly in Inuit sculpture as senior artists recall the older mythology, and younger artists interpret the stories they have been told by their elders.

Artist Bill Nasogaluak often references a specific shaman in his sculptural work to convey messages about the contemporary reality of life in the north. The Inuvialuit bird-shaman Gooblualuq, of whom stories were passed along to Nasogaluak by his father, figures frequently as a half-man, half-bird figure. Known as the last great shaman of Tuktoyaktuk, Nasogaluak’s home community, Gooblualuq was known for his ability to change his form into that of a bird. In his poignant piece Shaman Losing Power, Nasogaluak uses the figure of Gooblualuq as a vehicle to comment on the spiritual changes the introduction of Christianity brought to the arctic. In the piece, feathers fall from Gooblualuq’s outstretched wing-arms representing the shaman losing his power along with a loss of traditional beliefs and stories replaced with Christianity in the early days of the twentieth century, and the reverberating effects that continue to be felt. 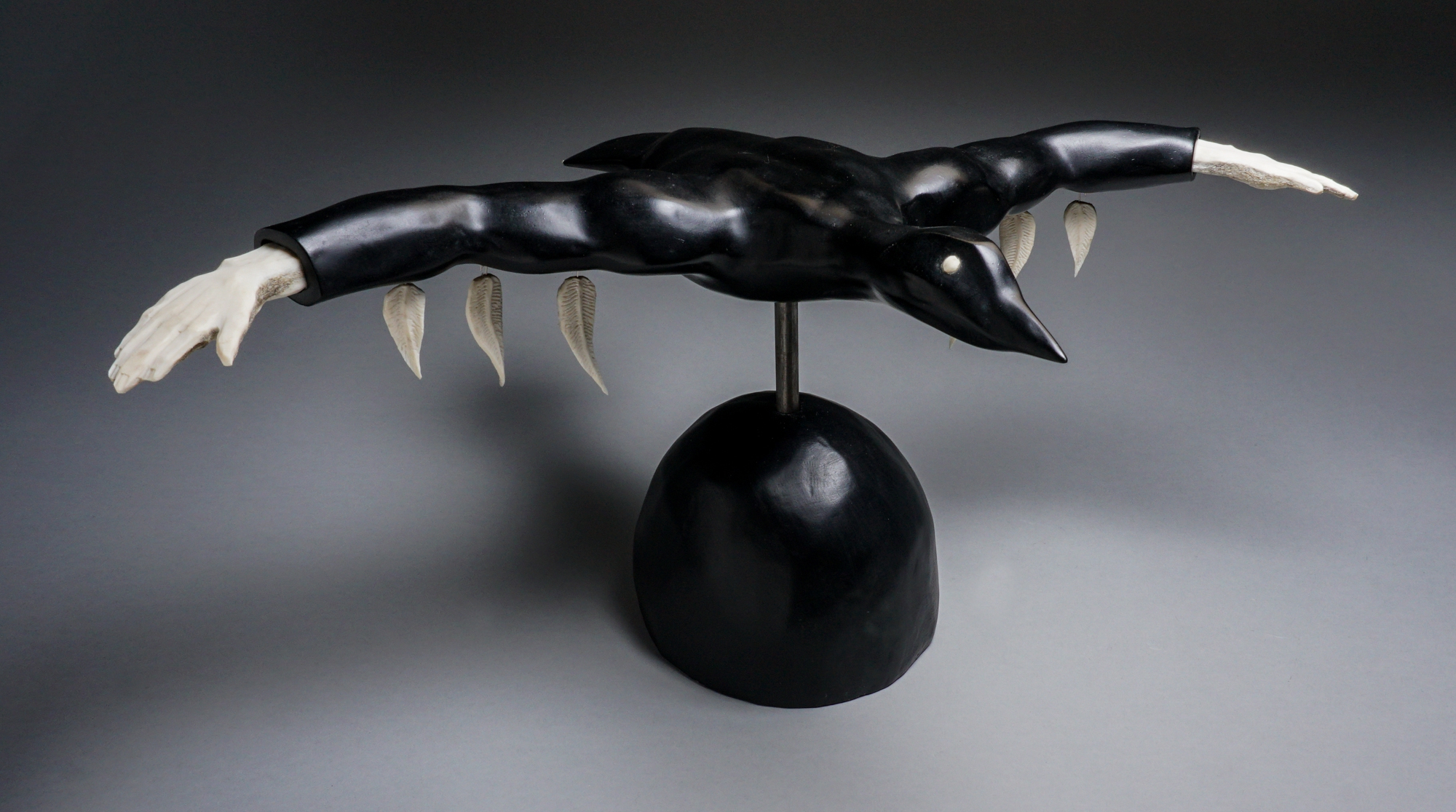 Because the Arctic can be such an extreme and hostile environment, traditional Inuit belief held that a powerful individual – such as the shaman – could transform in a time of need, taking on the attributes of a specific animal. With the wings of a bird you could fly away from an isolated ice floe to safety; the cunning of the polar bear might aid you in an attempt to catch fish to eat. Qavavau Manumie’s drawing Bird-Squid Transformation (2019) is an interesting case study. Manumie shows us a squid with wings rescuing two hunters trapped on an isolated piece of ice floe. Whatever will happen next is up to the viewer’s interpretation—will the squid use its wings to fly the hunters back to safety?

There is a strong tradition of depicting transformation subjects in art in the communities of Gjoa Haven and Taloyoak. Names like Karoo Ashevak come to mind, whose otherworldly whalebone sculptures combined the transformation theme with the aesthetically grotesque. Maudie Okittuq is another sculptor who took transformations to a distinctive new level, similarly incorporating the grotesque in her own signature fashion through the use of red inlaid eye or elongated or bulbous features.

Okittuq’s piece Transformation portrays the subject quite literally as a double-sided head—one side human, one side bear. Andrew Palongayak of Gjoa Haven, son of the established carver Andy Palongayak, imbues his piece Shaman Transforming (2016) with a playful, dynamic stance. This shaman could possibly be dancing or rather, caught in the act of transforming into a walrus as one foot resembles a flipper while the other still wears a kamik (boot).

Although some Inuit sculptures relate directly to traditional legends, in many cases we do not know the specific story being referred to, or the artist is showing us a symbolic ‘type’ of transformation rather than a particular event. There are still taboos, particularly among the older generation, about discussing traditional mythology with non-Inuit. Some of the younger generations have begun to tell us the tales that their grandparents told them, and so in time we may learn more about the fantastic creatures that fill the sculptures of today. 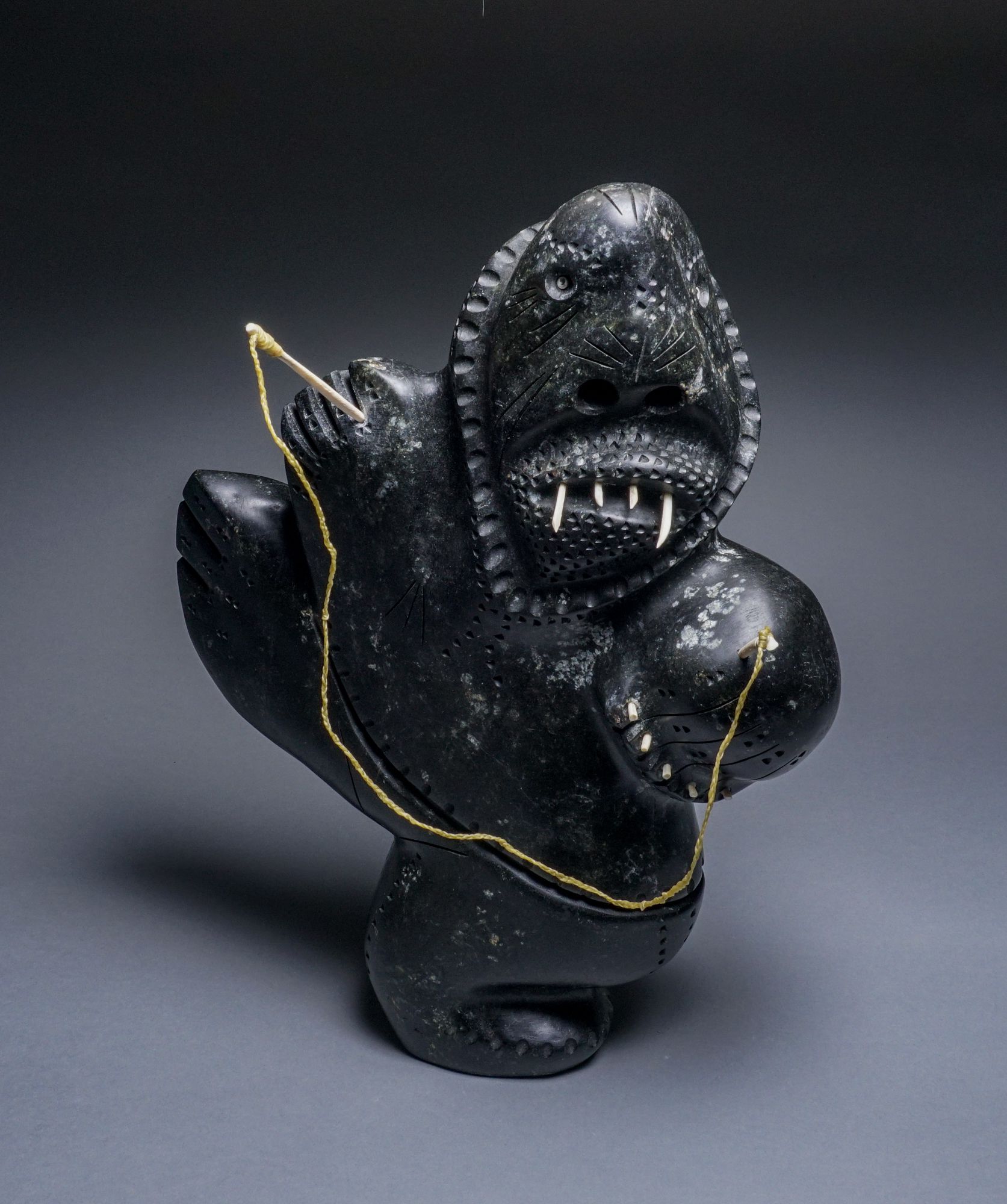