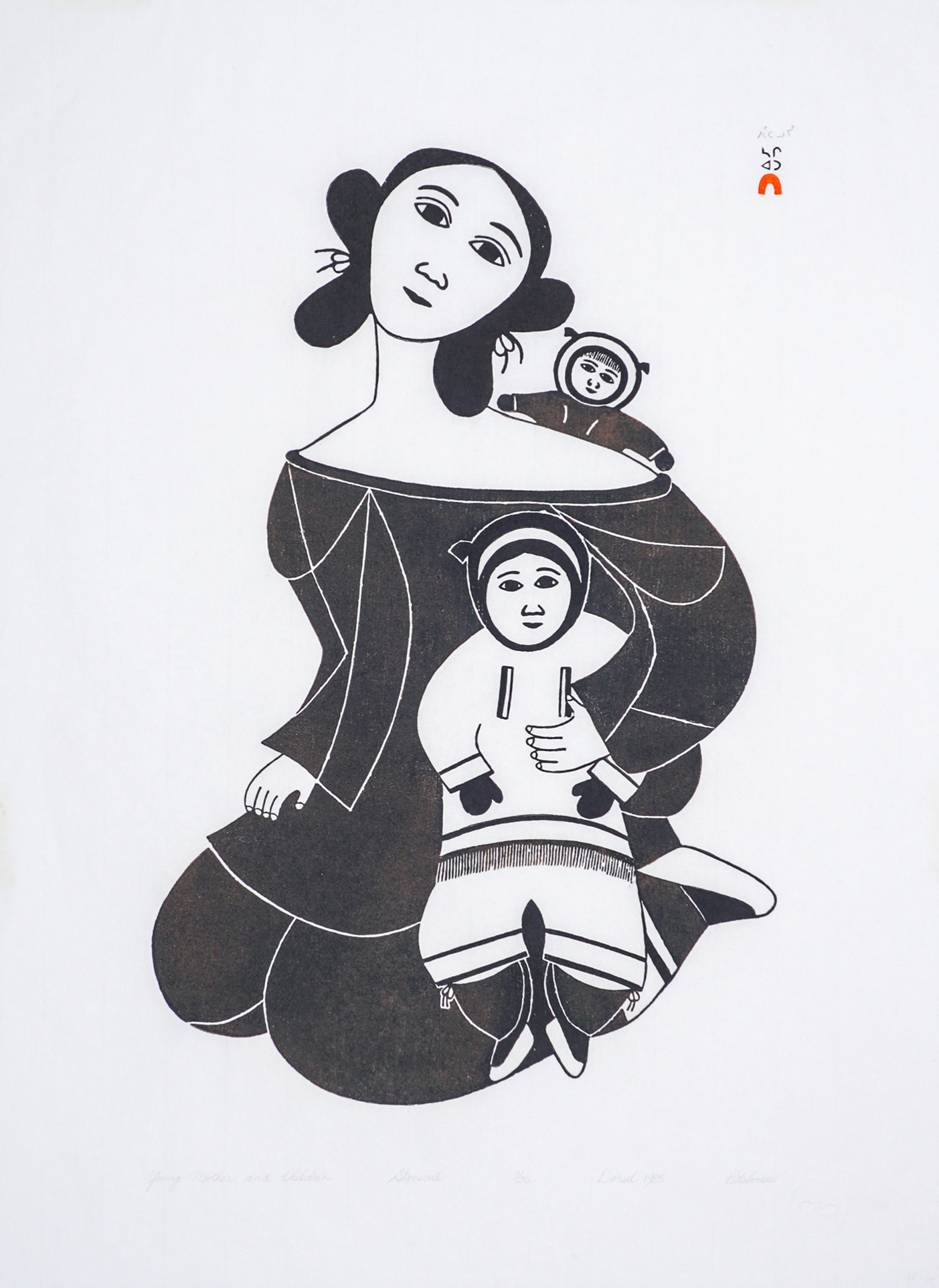 We’re overjoyed that our own Elyse recently welcomed a baby girl into the world! In honour of the new mom and baby, we decided to take a look at one of the most common subjects depicted in Inuit art—the Mother and Child. From early sculptures of Inuk mothers cradling children or keeping babies warm in their hoods, to the many prints produced and even recent drawings featuring variations on the subject, the Mother and Child remains a popular theme for collectors and admirers in the South. Likewise, the maternal image is a meaningful subject for artists practicing in the North – many of which are mothers themselves.

While for many in the West, the subject of Mother and Child may most immediately conjure images from Christianity – perhaps elaborate pre-Renaissance Maestà altarpieces or church icons depicting history’s most famous mother and child duo – the maternal image in fact has roots in art forms produced by cultures all over the world. This is of course due to the mother’s central role in regenerating and caring for new life, everywhere.

In Inuit art, the Mother and Child depictions we often see are naturalistic reflections of reality, featuring an Inuk mother sitting or standing with a child or children in her hood or arms. These images symbolize the integral role of the mother within the Inuit family and the community. In addition to bringing children into the world and raising them, Inuit women are also central to care-giving for the family at large by gathering and preparing food as well as sewing skins into garments and tents to protect against the Arctic climate. While these roles are most often discussed in relation to traditional life, they do very much continue on into the present day. 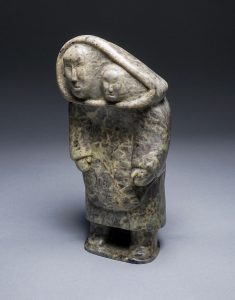 Artists sometimes even represent mothers in the animal world, such as the bird mother feeding her young in Kellypalik Etidlooie’s Bird with Chicks (2018). Works like this display not only the artist’s appreciation and knowledge of the anatomy of local wildlife, but also bear the symbolic meaning of maternal importance and nurturing qualities that exist across the natural world.

Mothers in Inuit art are almost always depicted wearing an Inuit mother’s parka called an amauti. Amautiit (plural) are different from other parkas in that they feature an enlarged hood, a child-carrying pouch, a long back tail, and apron-like front. The word amauti or amautik comes from the Inuktitut phrase “to carry” – amaq. [1] This indicates the garment’s purpose to not only keep the mother warm, but also to carry the child with mom, placed in the back pouch of the parka underneath the hood.

Amautiit are extremely beautiful and produced by Inuit women who have honed their incredible stitching skills over generations. They are also very functional for mothers who can carry children around while working in the amauti until they are two years of age or older. Pressed up against the mother’s back, the amauti creates an oven of comfort generated by body heat and the insulation from the skin garment. And contrary to popular belief, and something depicted frequently in Mother and Child Inuit artworks, is that the child is not carried in the hood proper – they in fact sit in a hidden pouch on the mother’s back. The hood in this case is meant to cover both mother and child together. 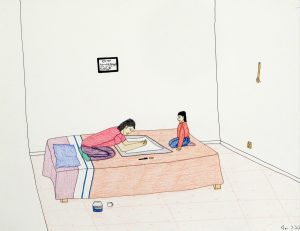 In contemporary Inuit art, artists have rejuvenated the theme of the Mother and Child in remarkable ways. Ningiukulu Teevee has played with the amauti as a motif, placing the garment on a variety of animals such as loons, owls, Arctic char, and various birds, anthropomorphizing them into maternal characters. Shuvinai Ashoona taken a similar approach with merging the human and non-human in her many birthing scenes, where mothers have been depicted giving birth to not only human children but also animals, fantastical creatures, and miniature globes – an image common in the artist’s personal iconography.

The late Annie Pootoogook also took to the theme of Mother and Child from an autobiographical point of view. In some drawings, the artist would depict herself as a young girl watching her matriarchs, mother Napachie Pootoogook and grandmother Pitseolak Ashoona, drawing in their respective beds. Pootoogook’s works mark a contemporary rendition on the theme of Mother and Child that reflects on women’s changing role in the community, working as professional artists who continue to pass their creativity on to the new generations.

To see our available works on the theme of Mother and Child, click here.