The Co-op: Drawings from Cape Dorset 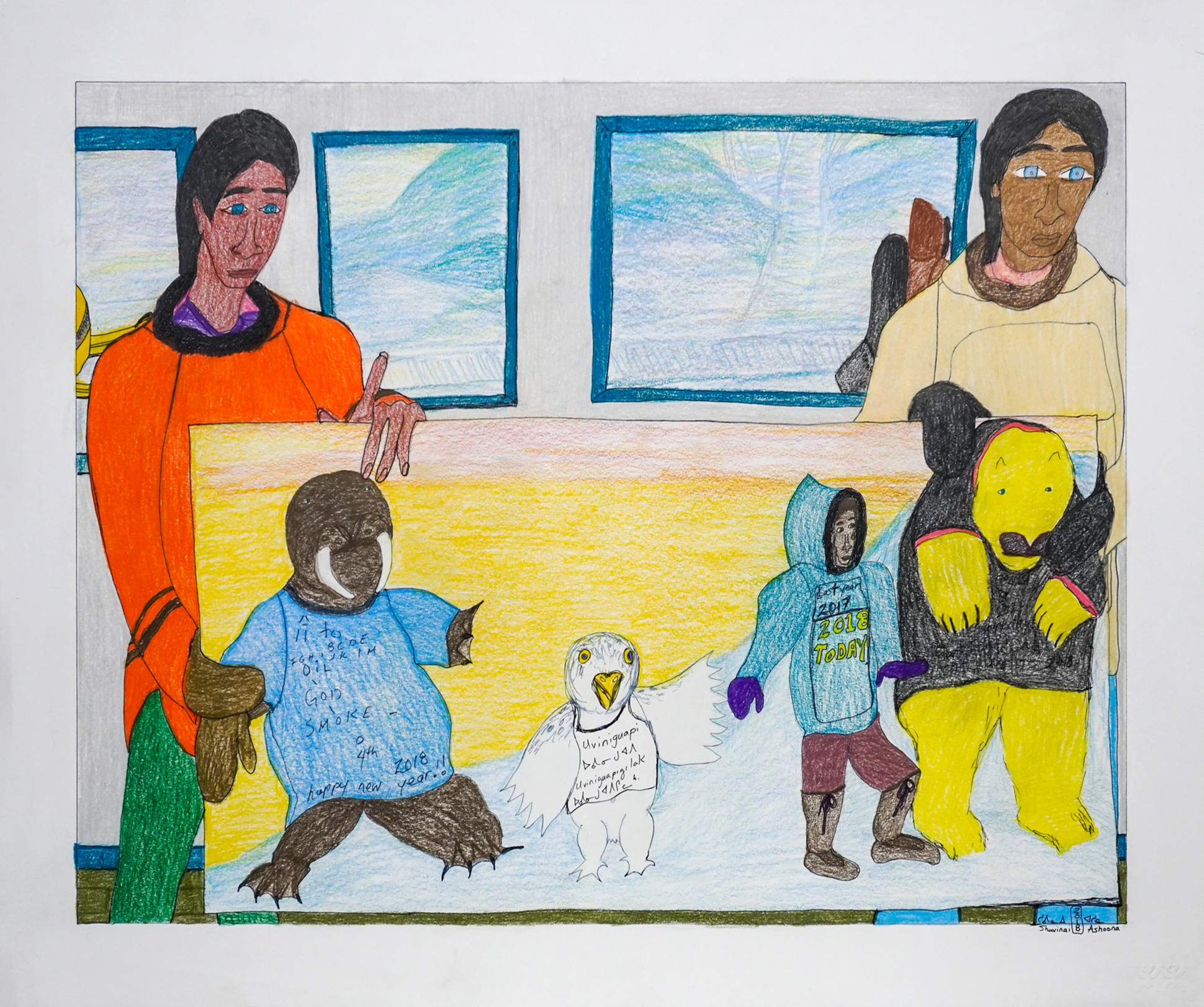 The Co-op is a group exhibition of drawings by the Cape Dorset artists celebrating 60 years of the Kinngait Studios. Commonly referred to as the Co-op (as part of the West Baffin Eskimo Co-operative), the studios have been intimately involved in the lives of the Cape Dorset artists since 1959. They are also the longest continuously running printmaking studios in Canada. The works featured in The Co-op recollect the on-goings of studio life, the artist’s tools, and the key figures central to the Co-op’s dynamic history.

Since the Co-op’s formal inception in 1959, it has supplied artists with working spaces, communal encouragement, and opportunities for skills development. Artists like Osuitok Ipeelee and Kananginak Pootoogook were instrumental in founding the print program with advisor James Houston. Kananginak remained Houston’s “right-hand man” and went on to become one of the Co-op’s longest-practicing printmakers. Various advisors ensured artmaking continuity throughout 60 years such as Terry Ryan, who arrived as a young art student then stayed for 30 years, as well as Jimmy Manning, Paul Machnik, and William Ritchie. Each introduced new techniques to the studios—engraving, etching and aquatint, lithography. Eventually drawing, which many first-generation artists experimented with in the late 1950s, was re-introduced as a viable medium once more. Today, the resurgence of drawing signals artmaking techniques coming full circle after 60 years.

The first artmaking studio was small but mighty. At 512 square feet it was referred to as the sanaunguabik—a place to make small things. Today, the studios are housed at the new Kenojuak Cultural Centre, an over 10,000 square foot building that is also home to community meeting rooms and exhibition spaces. Artists like Shuvinai Ashoona, Kudluajuk Ashoona, and Nicotye Samayualie depict the Co-op’s various buildings from the past 60 years, both inside and out. Through these drawings, the importance and affinity for the communal studio space of the Co-op is evident.

The Co-op logo, designed by artist Sheouak around 1961, is explored by several artists in the show. Nicotye Samayualie’s Composition (Co-op Camo) removes the logo from its usual context bringing it back into a realm of abstraction. In WBEC Tattoos, Shuvinai Ashoona playfully transforms the logo into tunniit—traditional Inuit tattoos on the face of a blonde-haired, purple-eyed woman. The inclusion of the logo reflects both the prevalence of the symbol in the artists’ everyday life (as it appears on every Dorset print and is embossed on all drawing paper) as well as artistic cohesion and an affinity for the Co-op itself.