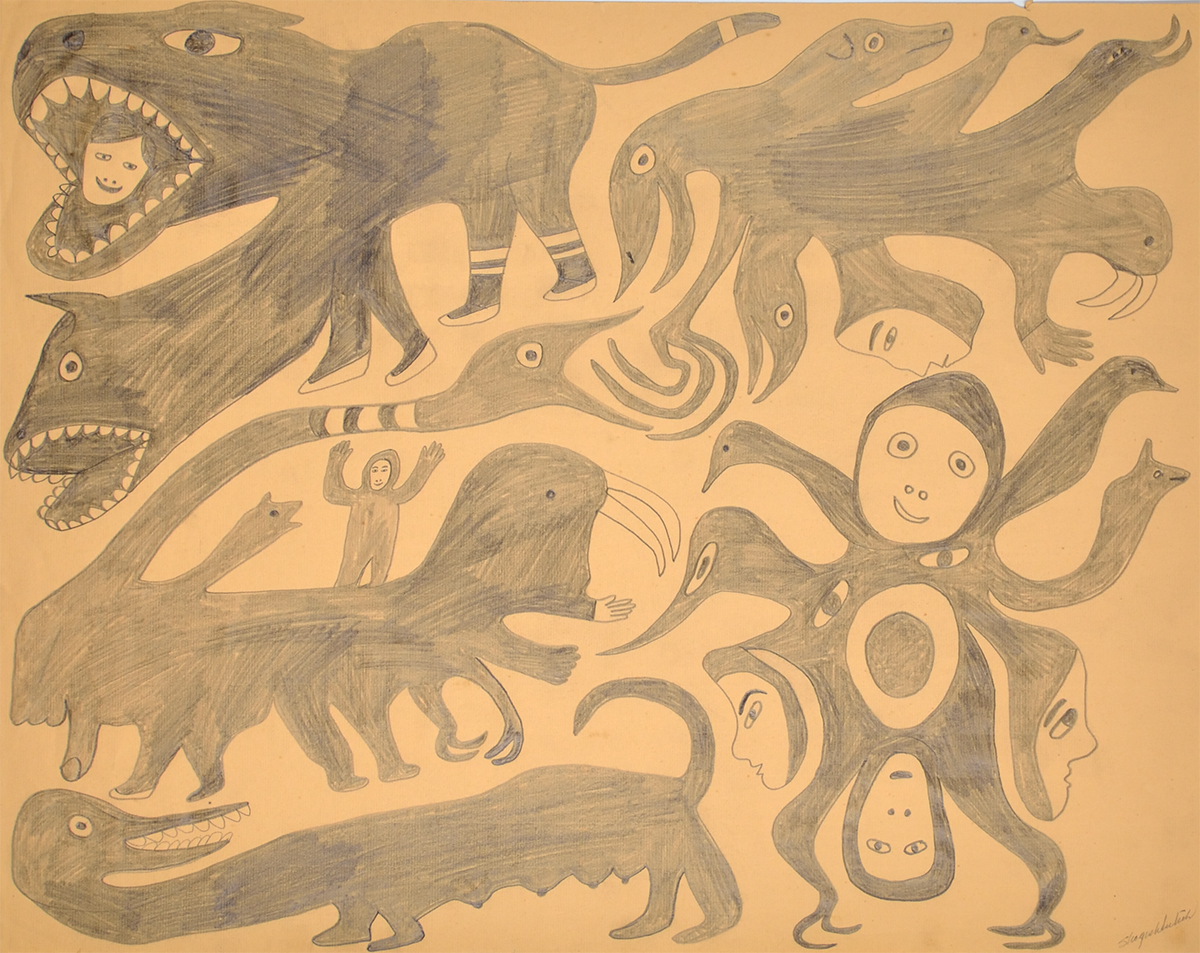 Forward
In the early 1960’s, pencils and papers were distributed to the fledgling artists of Cape Dorset with the aim of developing an arts and crafts program in the community. Some people took up the challenge with gusto and bravado while others approached the sheets of paper with doubt and trepidation. Looking for guidance, they were simply instructed to ‘draw your stories – draw what you know, draw whatever is in your mind.’ Many took pencil in hand and drew what they knew from experience – pedantic depictions of family members, animals and fish, memories of youth and of life on the land, the hunt. There were a few however who drew strange combinations of animals and human forms distorted and embellished into fantastic beasts, grotesque monsters and mystical beings that no one recognized from their daily lives and very few people had ever seen before.

Some of these creatures came from visualizations conjured up through oral legends and stories told by elders and shamans but many other drawings were subconscious constructions gleaned from the dark recesses of memory and imagination, almost like surreal or automatic painting. A few of the artists were not even aware of what they had created until the drawings were complete and even commented on them as if they were the work of someone (or something) else. Omalluq Oshutsiaq said about one of her first efforts, “I must have been dreaming when I drew this. My mind was blank when I started drawing.” These visions transcribed to paper had no known references other than perhaps ancient memories, the spirit world and possibly quirks of visual perception and the human instinct to seek patterns in nature. Look hard enough and variations of these drawings can be discerned in the random shapes and lines in the Baffin landscape – fissures in rocks, shadows on snow, reflections in water, etc.

Many of these weird and wondrous drawings were the genesis of what would become a definite and distinct Cape Dorset aesthetic despite the many generations of individual styles and iterations that would follow. Even when influences of Western cultures as diverse as Disney and Del Toro are added (as for instance in some of the drawings by Qavavau Manumie and Tim Pitsiulak respectively), there is still an inimitable look to Cape Dorset drawings.

Sixty Years of the Supernatural in Drawings from Kinngait

The spectacular beings of contemporary artists Shuvinai Ashoona and Saimaiyu Akesuk are celebrated for their wonderful flights of fantasy. As the bold experimentations of third and fourth generation artists chart new conceptual orientations in contemporary art, they build upon a rich tradition of Inuit worldviews. In parallel to Tunirrusiangit: Kenojuak Ashevak and Tim Pitsiulak at the Art Gallery of Ontario, Spectacular Beings explores sixty years of the supernatural in the graphic tradition of Kinngait, Nunavut. 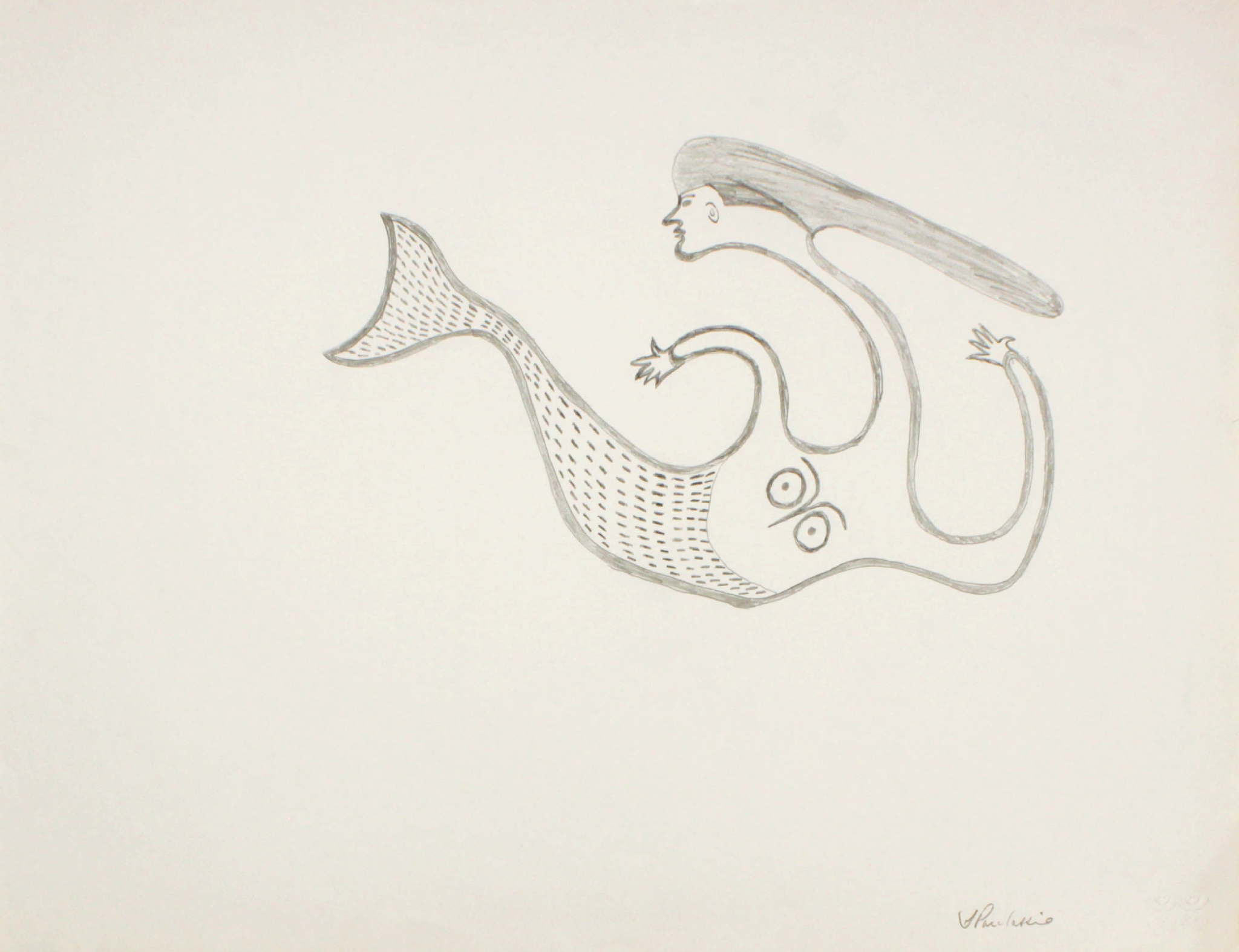 Since its inception in 1959, the artists producing works through the Kinngait’s co-operative have explored themes of transformation, shamanism, and the symbiotic relationship between humans and animals. Often designated by generation, first generation artists like Paulaussie Pootoogook (1927 – 2006) and Kenojuak Ashevak (1927 – 2013) spent their formative years living on the land, and were seminal artists involved with the co-op in its early days. Second generation artists such as Kakulu Saggiaktok (b. 1940) and Mayoreak Ashoona (b. 1946) were born on the land, but lived in Kinngait for much of their lives. Many Inuit of these generations have embraced Christianity with fervour. Depicting the supernatural may have allowed a number of artists to incorporate traditionally held notions of shamanism and transformation into their art.

The third generation of artists producing works at the Kinngait Studio refers to a cohort of familial groups who have lived their entire lives in and around the community, with ties and influence from the South. Artists like Jutai Toonoo (1959 – 2015) and Shuvinai Ashoona (b. 1961) grew up in households with significant access to global culture. A newly emergent fourth generation of artists who have lived their whole lives in town include the artists Saimaiyu Akesuk (b. 1986) and Ooloosie Saila (b. 1991). By the 1990s, the destructive effects of climate change and a creeping global capitalism grew evermore urgent as new oil reserves and shipping routes emerged in the North. Living amidst times of increasing uncertainty, many artists of these later generations are reinterpreting traditional themes. For younger artists, shamanism can provide a rich source of subject matter, from healing powers, to transformation, to the ability to fly. Depictions of these fantastic themes continue to evolve and become an important means of affirming Inuit identity.

The first works produced through the Kinngait co-operative were graphite on paper. Co-op employees gave pencils and paper to local Inuit families living on the land to document their experiences. That many of the artists creating amidst the co-op’s fledgling days are unknown is typical, and does not detract from the quality of their work. The whimsy and fantasy of their spectacular beings continue to inspire. Evident in first generation works like Composition (Creatures) by Eegyvudluk Ragee, animals and humans emerge from the same forms, joining and overlapping in a floating organic whole. The enigmatic powers associated with shamanism continued to exert an influence over many artists, as visual mediums may have provided a safe outlet to represent subjects that could not be openly discussed.

Paulaussie Pootoogook (1927 – 2006)
Paulaussie is the eldest of the four sons of noted local leader Pootoogook, who was pivotal to the formation of the hamlet of Kinngait. All four brothers (including Eegyvudluk, Kananginak and Pudlat) and many of their wives and children are artists renowned at the national and international levels. First generation artists cemented a tradition of transformation imagery, where spirituality and the supernatural infuse figures of melding human and animal form. Alongside a number of Kinngait’s foundational first generation, Paulaussie is notable for establishing a tradition of stylized naturalism, epitomized in his Enchanting Sedna. 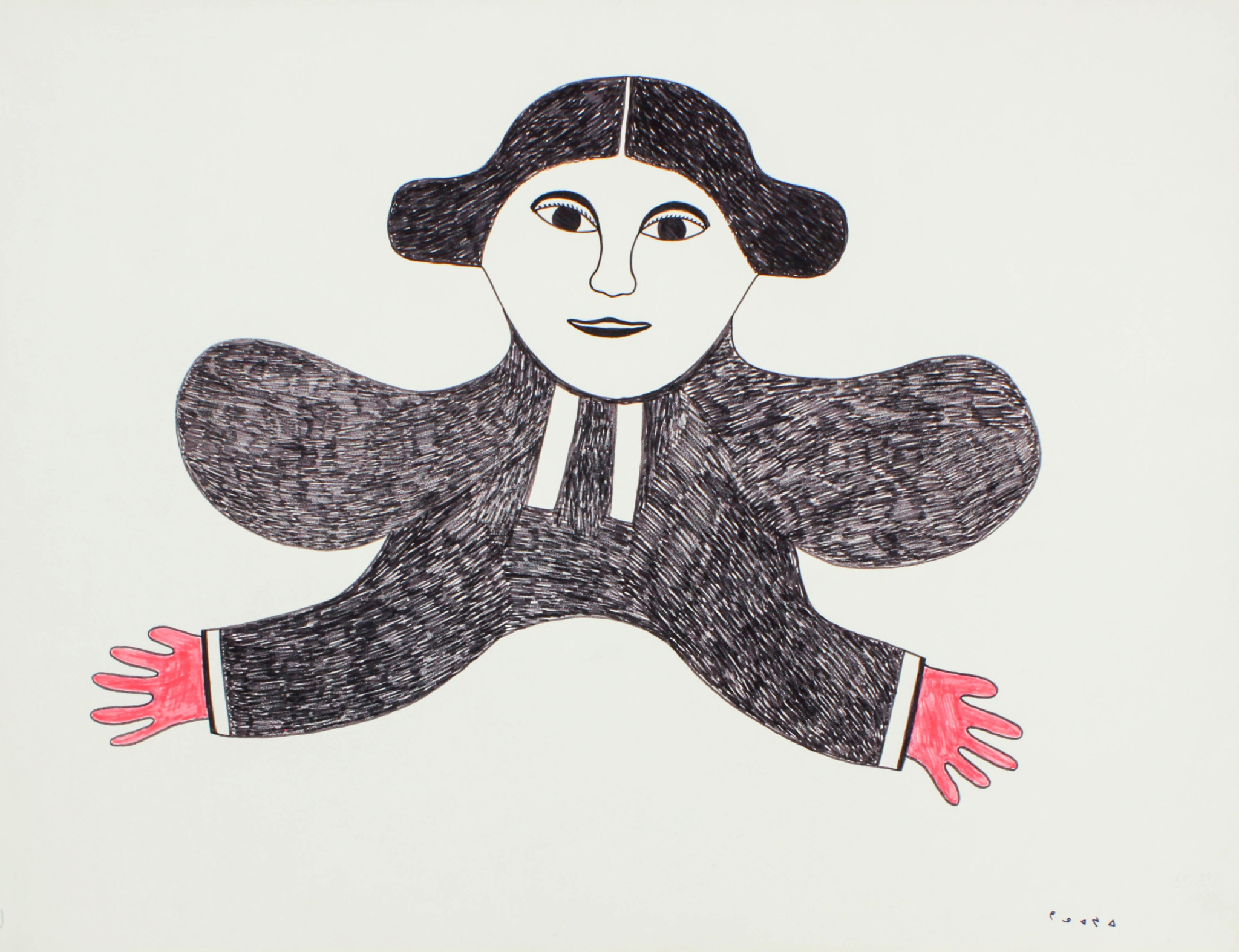 Kenojuak Ashevak (1927 – 2013)
Born in 1927 at a campsite in southern Baffin Island, Kenojuak lived a traditional nomadic life before transitioning her family to town life in Kinngait in the 1960s. Due to her strength and innovation in traditional media, Kenojuak was amongst the first Inuit women drawing in Kinngait to gain individual attention. Carrying forward the bold outlines, graphic contrasts and symmetrical compositions from her early beadwork and inlaid sealskin, Kenojuak developed her now iconic and instantly recognizable graphic style.

Mayoreak Ashoona (b. 1946)
Born in 1946, Mayoreak and her family have always balanced camp life throughout Baffin Island and town life in Kinngait. While drawing since the 1960s, Mayoreak’s early artworks are numbered due to her considerable family obligations. They were also overshadowed by the personality and success of her husband, well-known sculptor Qaqaq Ashoona. Since the late 1990s, Mayoreak’s art has grown more confident and prolific, and her career is garnering long overdue appreciation and acclaim. Recent works are particularly celebrated for their gestural and whimsical qualities.

Kakulu Saggiaktok (b. 1940)
Kakulu was born on the Nascopie, a Hudson’s Bay Company supply ship, as her family travelled to the northern stretches of Baffin Island to hunt and trap. Kakulu’s family didn’t move to Kinngait until she was child, though continued to lead lives at camp for extended periods. Kakulu’s playful and charming imagery is reminiscent of childhood memories on the land. Deeply interested in Inuit folklore and mythology, Kakulu often explores the themes of transformation and shamans mediating the natural and the supernatural. Her oil stick drawings are fittingly painterly, as animals blend into other beings. Her later drawings subsequently gained increasingly fluid and dynamic compositions.

Meelia Kelly (1940 – 2006)
Meelia was born in an outpost camp near present-day Kinngait. Building a family of eleven children and adopting two more, Meelia’s familial obligations kept her busy throughout much of her life. As a latecomer to graphic arts, Meelia’s works reveal a mature confidence and talent through their strong graphic appeal. Evident in her balanced compositions, forms of spectacular beings undulate to form harmonious wholes. While whimsy and the fantastic may be themes occasionally explored for some, they were Meelia’s modus operandi. Spectacular beings were always this artist’s wheelhouse, and at the core of her practice. 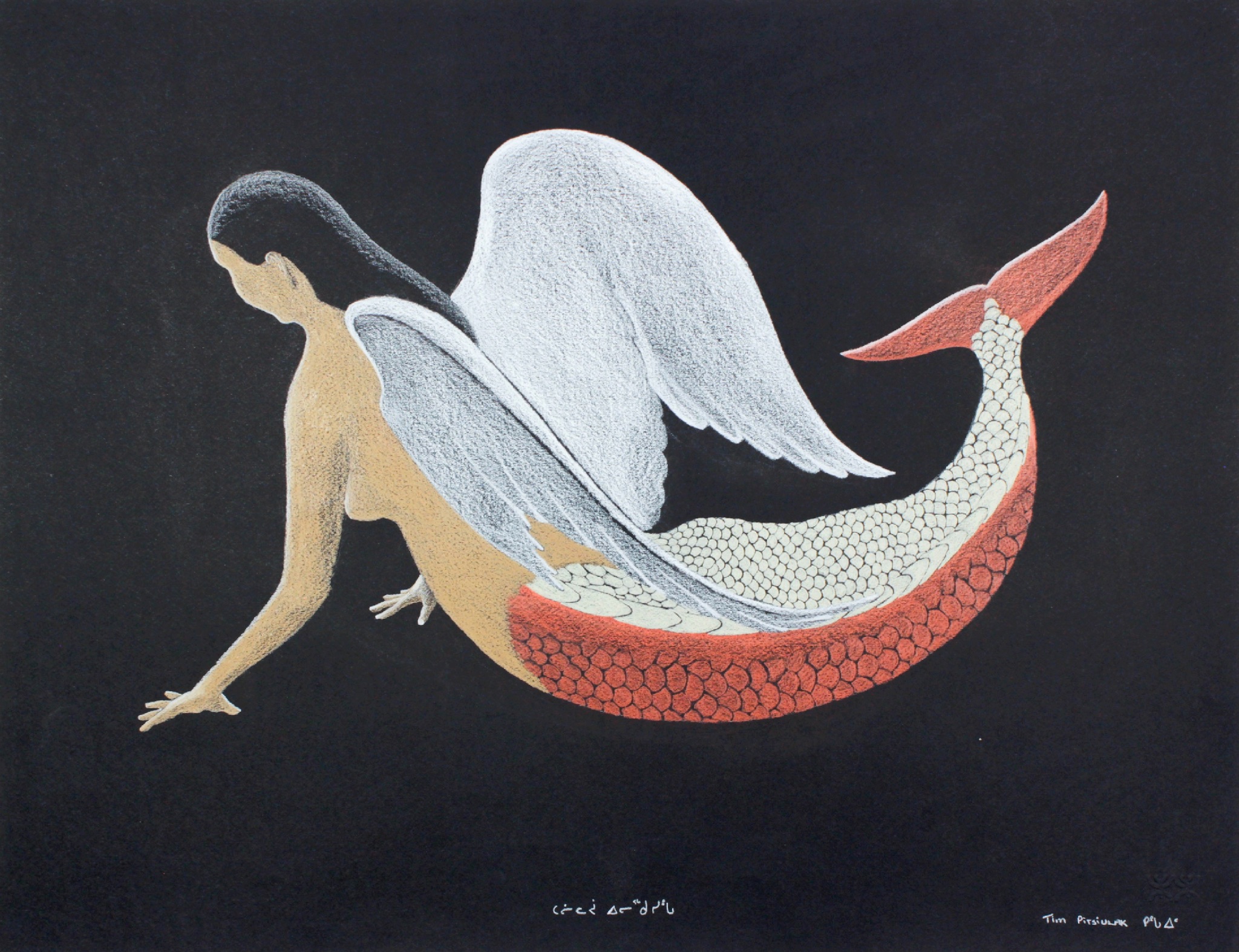 Qavavau Manumie (b. 1958)
Qavavau distinguishes himself as an art maker by excelling as both a graphic artist and a printmaker. His impressive range is evident in his ability to oscillate between highly abstract and representational vocabularies. In these narrative works, Qavavau references the belief in a time when humans and animals could interchange form and embody each other’s behaviour. Naturalistically rendered, these compositions exhibit highly active areas of miniscule detail in startling contrast with open spaces of blank paper. Exemplary of Qavavau’s refined vernacular are his crisp lines and subtle, even application of colour.

Jutai Toonoo (1959 – 2015)
A force of iconoclasm, Jutai rarely made works that conformed to expectations about the style and content of contemporary Inuit art. Balancing personal issues of isolation and a search for identity with international social and political issues, Jutai was at once both introspective and global in his approach. His anxious use of surface texture and sombre background in Lucifer express a conspicuous loneliness for the figure in question.

Tim Pitsiulak (1967 – 2016)
Based in Kinngait as a hunter, Tim was inspired by his aunt Kenojuak Ashevak to also become an artist. With an intimate knowledge of Kinngait’s surrounding environment, recurrent in his practice are elements of Arctic marine mammals, particularly walruses, beluga and bowhead whales. Revered for his large drawings’ exquisite attention to detail, it is tempting to associate Tim with naturalism. The supernatural however has always been one of the most fantastic departures from Tim’s core oeuvre. In Angel Sedna, a powerful example of syncretism, Tim combines elements of different beliefs to allow for an inclusive approach to faith.

Shuvinai Ashoona (b. 1961)
Unhindered by a lack of formal training, Shuvinai is a vanguard Inuk artist well established in contemporary art. Building upon the transformative imagery of first generation artists, her work is built of contrasts to show both the richness and terrors of contemporary Inuit cultures. Long celebrated for observing the particulars of place in her landscapes, Shuvinai has shot to the forefront of contemporary art with her abstract phantasmagoria of popular culture, Inuit mythology, and a collision of literal and figurative worlds. Her current drawings offer terrifying and beautifully sublime snapshots of a changing culture. Shuvinai’s works represent a culmination of sixty years of spectacular beings in Kinngait art, and have expanded the genre for future artists with philosophical and mythology-rich subject matter. 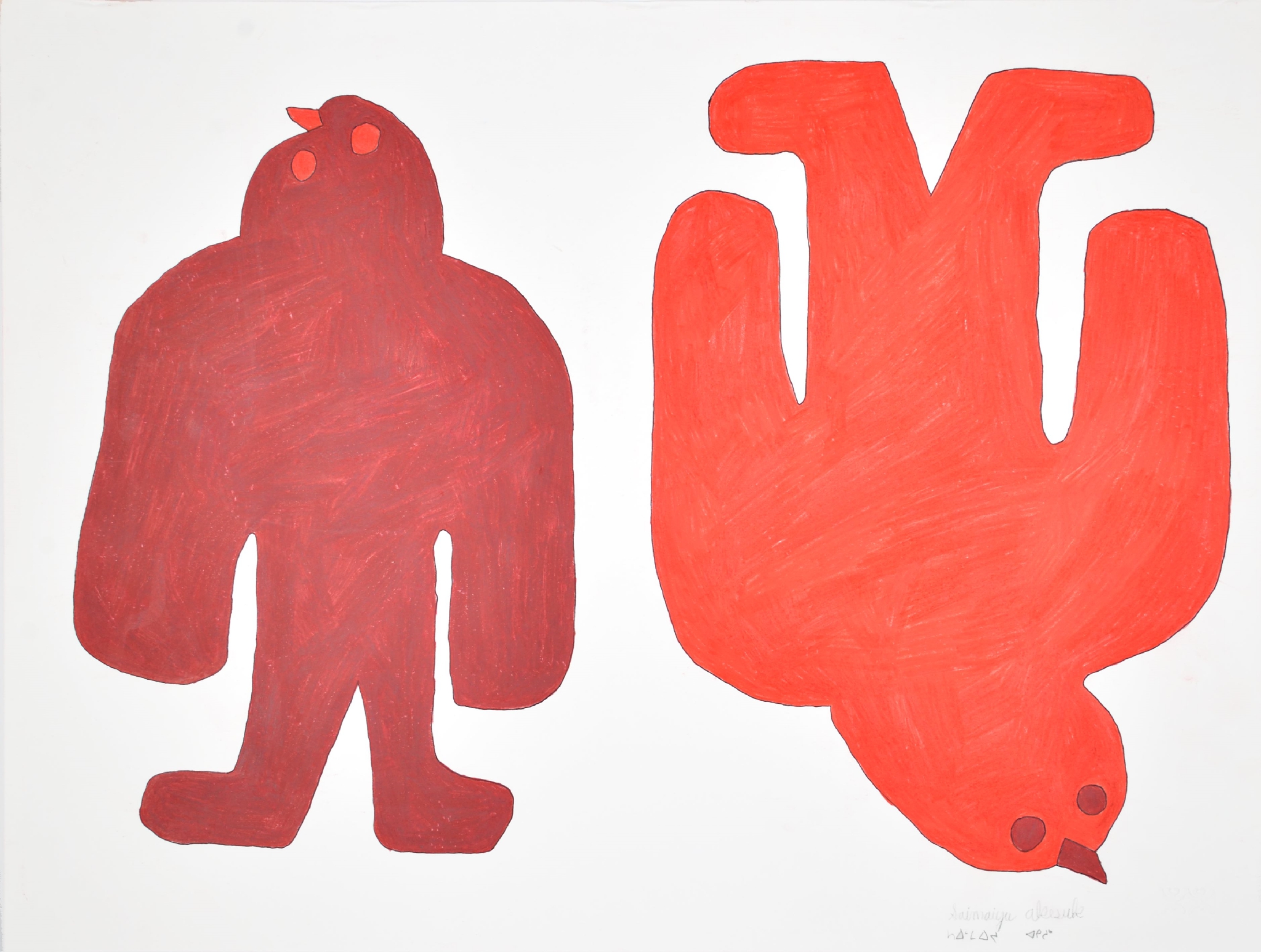 Saimaiyu Akesuk (b. 1988)
A young elementary schoolteacher and artist living in Kinngait, Saimaiyu was first encouraged to draw by Ningiukulu Teevee. She was inspired by and shares the same refined sensibility for imaginative imagery with minimal detail as her grandfather, celebrated sculptor Latcholassie Akesuk. Saimaiyu continues to expand the scope of graphic art by translating decidedly smooth and sculptural weight into planar form. Gaining rapid traction since her artworks’ first exhibition at Art Toronto 2013, Saimaiyu’s forceful application of surface texture and colour continue to garner acclaim and momentum among contemporary critics.

Ooloosie Saila (b. 1991)
Ooloosie is among the youngest of Feheley Fine Art’s roster of emerging artists. In contrast to the intricate details of her landscapes, her fantastic beings are executed with looser, more whimsical qualities. Ooloosie’s bold outlines, graphic contrasts and symmetrical compositions are reminiscent of Kenojuak Ashevak’s, whose home Ooloosie visited in her childhood. These visits facilitated an environment where Ooloosie would practice her drawing, cultivating the mature compositions that now characterize her work. Still at the early stages of her career, Ooloosie continues to draw the attention of Canadian and international institutions and collectors.