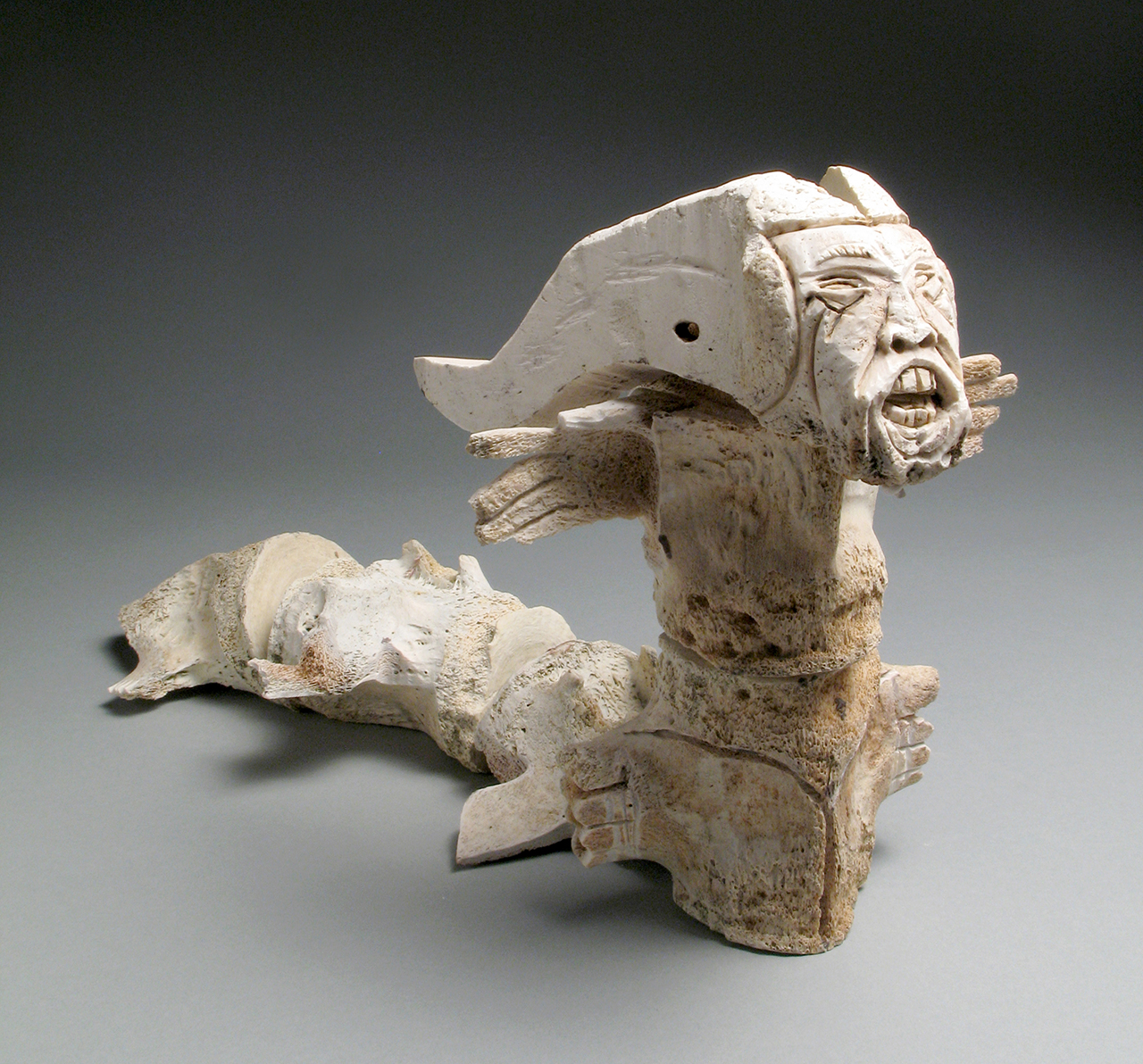 Edvard Munch’s well-known—and much written about— painting, The Scream, was created in 1893, and is widely considered to represent the universal anxiety of modern man. It depicts a screaming figure with a skull-like face, who appears to be in the throes of an unknown emotional crisis.  This image is now one of the most familiar in art history, having been adapted and reused in the popular arts in a myriad of ways; it has even been turned into a Halloween costume for children. Undoubtedly, our continued fascination with The Scream reflects the universality of anxiety in contemporary life.

Samonie Toonoo, an artist from the remote community of Cape Dorset, Baffin Island, has likely not seen The Scream or heard of Edvard Munch.  However, although it is difficult to compare contemporary Inuit soapstone sculpture and late-nineteenth-century Symbolist painting, I cannot help but recognize similarities between the two artists’ work. Toonoo’s art also speaks to an emotional crisis, and expresses a daunting sense of fear and sorrow and death, not only for Toonoo himself but also, perhaps, for the Northern community in which he lives. Toonoo frequently uses the motif of the skull in his work. Some of the sculptures are actual carvings of skulls, while in others bone faces, reminiscent of skulls, are applied to the carved soapstone figures.

Toonoo was born in 1969. Like many contemporary artists in Cape Dorset, Samonie is a member of an artistic family. His father was the sculptor known as Toonoo, and his brother Jutai Toonoo and sister Ovilioo Tunnillie are also well-known artists. Samonie has been carving for a number of years and his art typically represents transformation scenes drawn from Inuit folklore and nature. He suffers from a complex mental illness that impacts his production, allowing him to work only when he feels well. When not medicated, he experiences “schizophrenic hallucinations,” which result in the perception that certain people are watching him, the skulls for example. He describes his sculptures as a release of the “stuff in his head”; hence their sometimes cryptic and often frightening quality. His most recent body of work is highly personal, seeming to reflect the different aspects of his life. Like his contemporaries Annie Pootoogook, Shuvinai Ashoona and Jutai Toonoo, he has broken out of the prescribed expectations of Inuit art, forging a new vocabulary to interpret and represent the world. 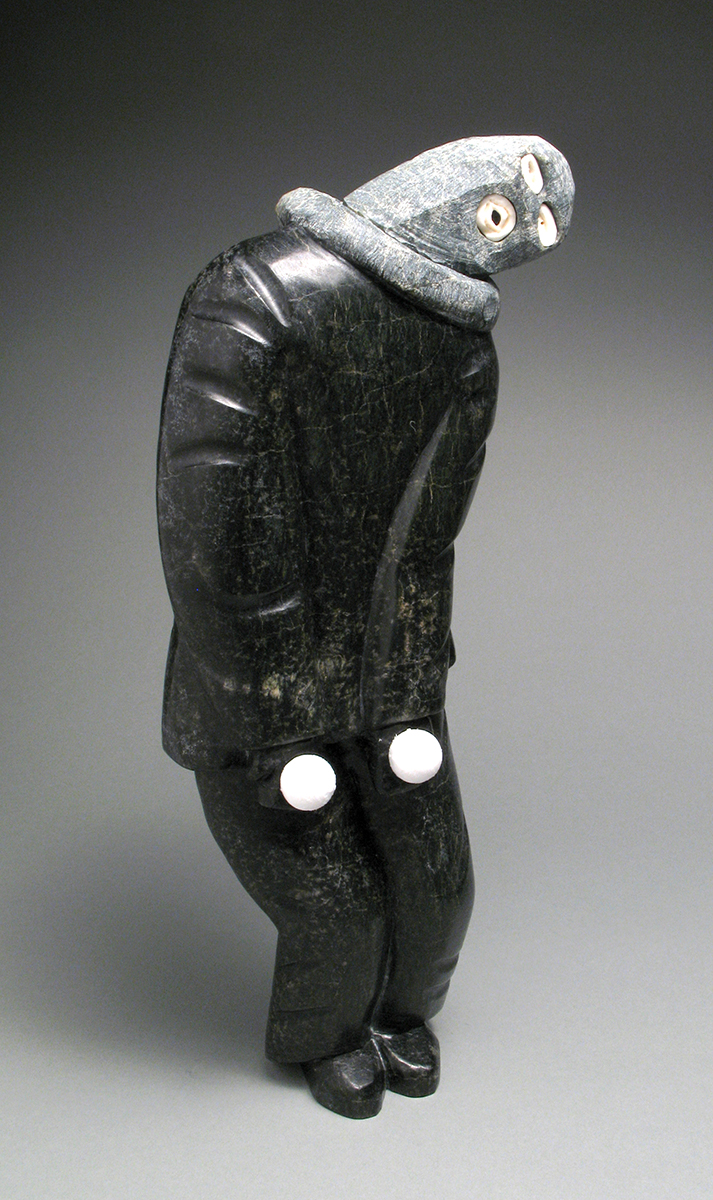 Toonoo’s work seems to divide into two general groups. The first depicts life in Cape Dorset: the figures of priests, break-dancers, hockey players, a suicide, a burglar and a baby in a kamik (which he saw on APTN) are carved with skill and confidence, some featuring bright yellow hair and wooden crosses. One of the most captivating sculptures in this group is of two figures holding snowballs. They are large, with balaclavas over their faces, and at first glance they look frightening. But on closer inspection we see that they are holding plastic snowballs in each hand. Compositionally, these are inspired works, initially threatening yet also benign.

The second group of works, I believe, reflects Toonoo’s personal demons. These monsters and dreams, composed of stone and antler, express his frustrations and fears. The cone-shaped skulls, the Gollum-like creatures, the skull-faced animals and the figure with an incised antler in the shape of a screaming face spewing from its mouth are all difficult to decipher. The artist claims that he carves them simply to earn a living and is not forthcoming about their meaning; however, one cannot help but recognize in them repeated evocations of sorrow, fear and death.

It is no secret that life in the Canadian Arctic is a hard one. The isolation of the communities and the absence of consistent mental health care are difficult issues in the North. Addiction and unemployment further complicate conditions in what is already a fragile community. The work of Toonoo and his generation speaks about the people of the New North and the problems they face. The magic of Inuit carving makes it a perfect vehicle for this exposé. Carving is a medium beloved to collectors of Inuit art, and Samonie Toonoo’s artistry in combining bone, stone and antler creates objects that are both beautiful and iconic. In his work we find no mythological Sedna or Dancing Bear, but rather a symbolic and immensely powerful representation of the struggles in the Canadian North and the artist’s troubled psyche.

Notes from an interview conducted with Samonie Toonoo on June 9 by Patricia Feheley in Cape Dorset.