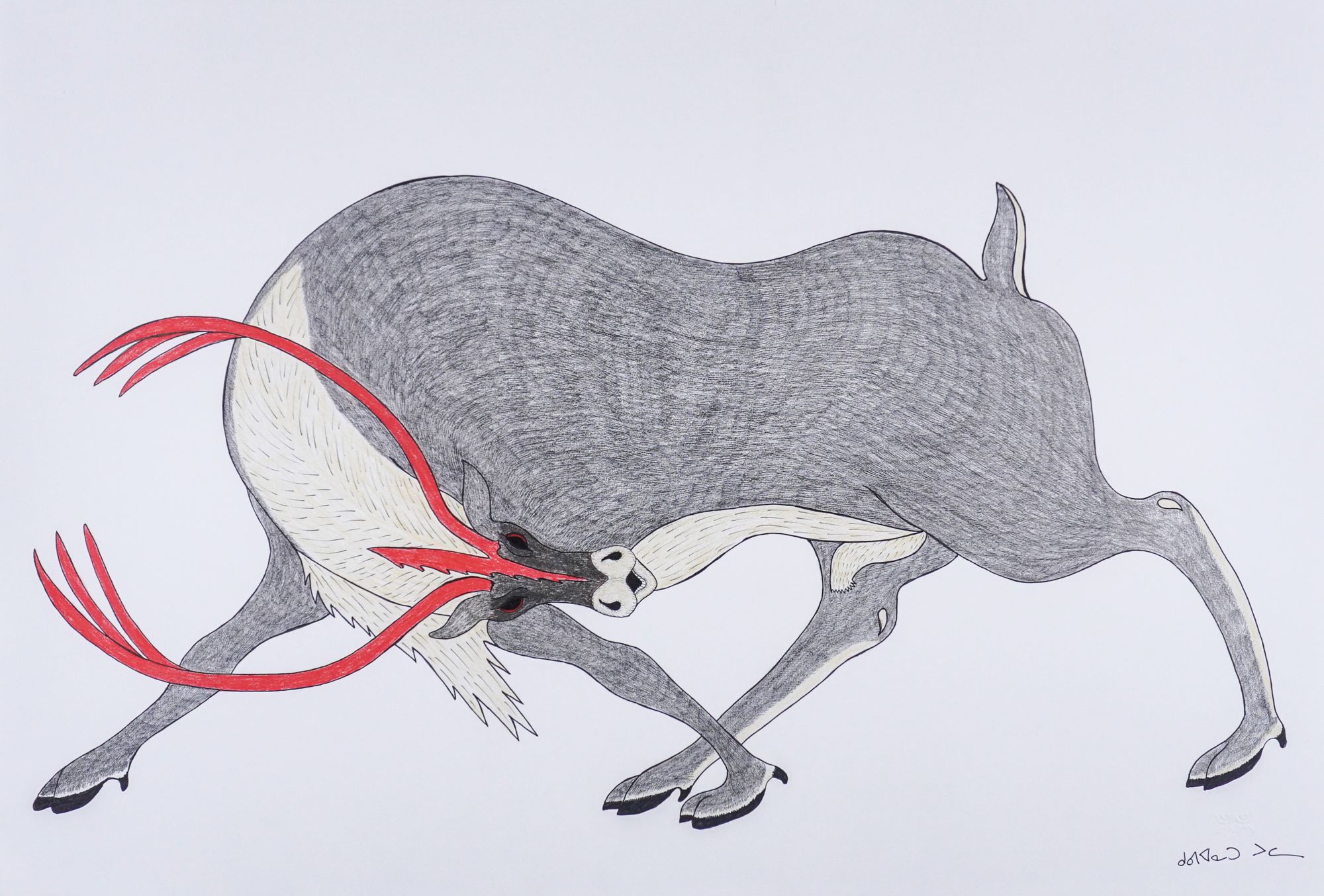 As in nature, it is difficult to find a straight line in the drawings of Kinngait artist Quvianaqtuk Pudlat. Instead, his marks curve, twist and undulate across the page like slow rolling tides. Pudlat only took up drawing in 2017 but has quickly earned a reputation as a formidable artist with a unique approach to subjects. Through a deft hand, Pudlat renders arctic animals in an incredibly singular and dynamic style. In his drawings, animals appear massive and strong but simultaneously graceful. The most sinister of creatures, like wolves and polar bears, are posed elegantly as they slink and slither across the page.

Pudlat’s palette is rich and vibrant, and his careful marks mimic the patterns of fur and feathers. Wolverine reveals his mastery of colour blocking with the creature’s blonde and black fur rendered uniformly in patterns that twist and swirl. His attention to detail is highlighted in drawings like Electric Raven in which he uses a vibrant cobalt to outline the individual feathers of a bird’s wings. The choice of such a bold colour seeks to capture how a raven’s feathers appear when illuminated by the sun. These thoughtful details characterize the drawings by Pudlat, who invites his viewers to observe, learn, and admire.

The drawings in Quvianaqtuk Pudlat-Wild form a kind of encyclopedia of Arctic wildlife. Informed by a lifetime of watching and hunting on the land around South Baffin Island, his highly-stylized animal compositions are full of rich, subtle details learned by those who, like Pudlat, have spent hours observing and tracking. Autumn Caribou shows a bull with coral red antlers that  appear at first almost surreal. But in fact, the highly pigmented rack represents a fleeting phenomenon that occurs for a period of a few hours after a caribou sheds its antler velvet in early autumn. The fantastically-hued antlers are a sight witnessed by few, but are just one of myriad of details about his local wildlife that Pudlat captures in his drawings

In addition to sharing colour palettes, often unknown to those in the South, Pudlat’s drawings best record the unusual movements of Arctic creatures. Caribou with legs akimbo, polar bears in yoga postures, dancing birds and wrestling wolves seem at first born completely of Pudlat’s imagination, but the artist reveals that these gymnastic poses have been observed in the wild. The animal in Annoyed Caribou is contorting to swat mosquitos, while Bear on Thin Ice shows a creature splayed out in an unusually wide stance to avoid breaking though thinning ice. Dancing Crane, shows a bird with its head thrown back, recording a mating ritual while young wolves playfully fight for dominance.

In but a few years, Pudlat has created a unique style in which to render certain creatures. Those familiar with Inuit art can easily identify a bird drawn by Kenojuak Ashevak or Pitseolak Ashoona, a caribou by Kananginak Pootoogook, a muskox by Pudlo Pudlat or a polar bear by Tim Pitsiulak. In the same way, Pudlat and his sinuous, serpentine creatures are immediately recognizable. Quvianaqtuk Pudlat made these drawings, and no one else could have.