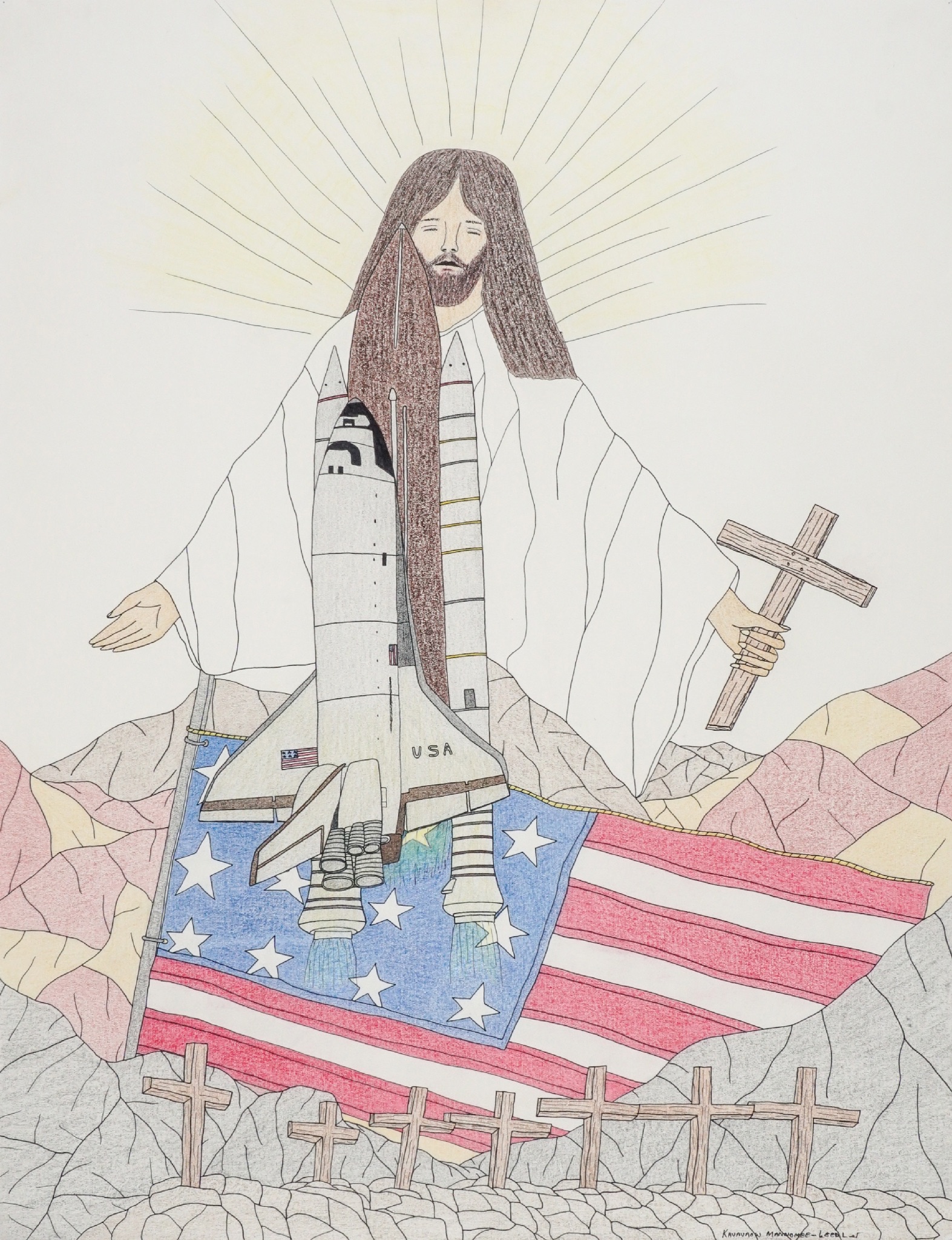 Born in Brandon, Manitoba, Qavavau Manumie (b. 1958) has lived in Kinngait (Cape Dorset) for most of his life. He is known for his intricate compositions in ink and coloured pencil, as well as his skills as a meticulous printmaker. Manumie’s work demonstrates a range of styles from the naturalistic, to the more illustrative, to the abstract. His thematic concerns are equally as diverse. Within an oeuvre of hundreds of drawings, Manumie has depicted Inuit legends and mythology, Arctic wildlife and community life, major global events, and more recently, images that poignantly convey one of the most pressing issues of our time: climate change.

Layers is an exhibition of forty works made by Manumie since the 1990s, including a selection that was featured in the inaugural Toronto Biennial in 2019. The idea of layers permeates both Manumie’s practice and his subject matter. His practice is multifaceted: in addition to being a graphic artist, Manumie is also a master printmaker who has worked at the Kinngait Studios for many years. He was first employed in the lithography studio and more recently in the stonecut shop. In this role, Manumie takes on the technical side of graphic art creation as he oversees and conducts the creation of a print from beginning to end. It is a rigorous process that includes translating other artists’ designs (and sometimes his own) onto a stone printing block, choosing and applying the appropriate inks, laying the paper, and, for the stonecuts, pressing the paper by hand using the back of a spoon. The process is done on repeat to create fifty perfect images.

This “other side” of Manumie’s practice results in a technique of precision that crosses over into his drawing work. One example includes his coloured pencil images that are almost always confined to a carefully drawn black ink outline, no matter how sporadic or abstract the subject may be. Fine details are not lost on Manumie.

Layers are also often seen within Manumie’s subject matter. Works are imbued with multiple meanings which the artist leaves open for the viewer’s mind to explore. Sometimes, he conveys moral messages about environmental concerns and relations with tools, objects, and animals, through Inuit iconography or stories. For example, the “little people” which frequently appear in Manumie’s drawings are in fact the Inuralaat—small humans who, according to tales told to a young Manumie by his father, might attack if you find their tracks in the snow. But Manumie’s Inuralaat are more playful in nature: they climb on top of trees made of harpoons and fashion flying devices out of wings and sticks. While little, they are strong, as conveyed by two Inuralaat who struggle to lift a stack of banknotes three times their size.

Manumie has always been able to use his technical skills and extraordinary imagination to make bold statements in cleverly subtle ways. His work is embedded with layers of humour, poignance, memories, local knowledge, and empathic feeling which makes it some of the most compelling and timely work to come out of Kinngait today. 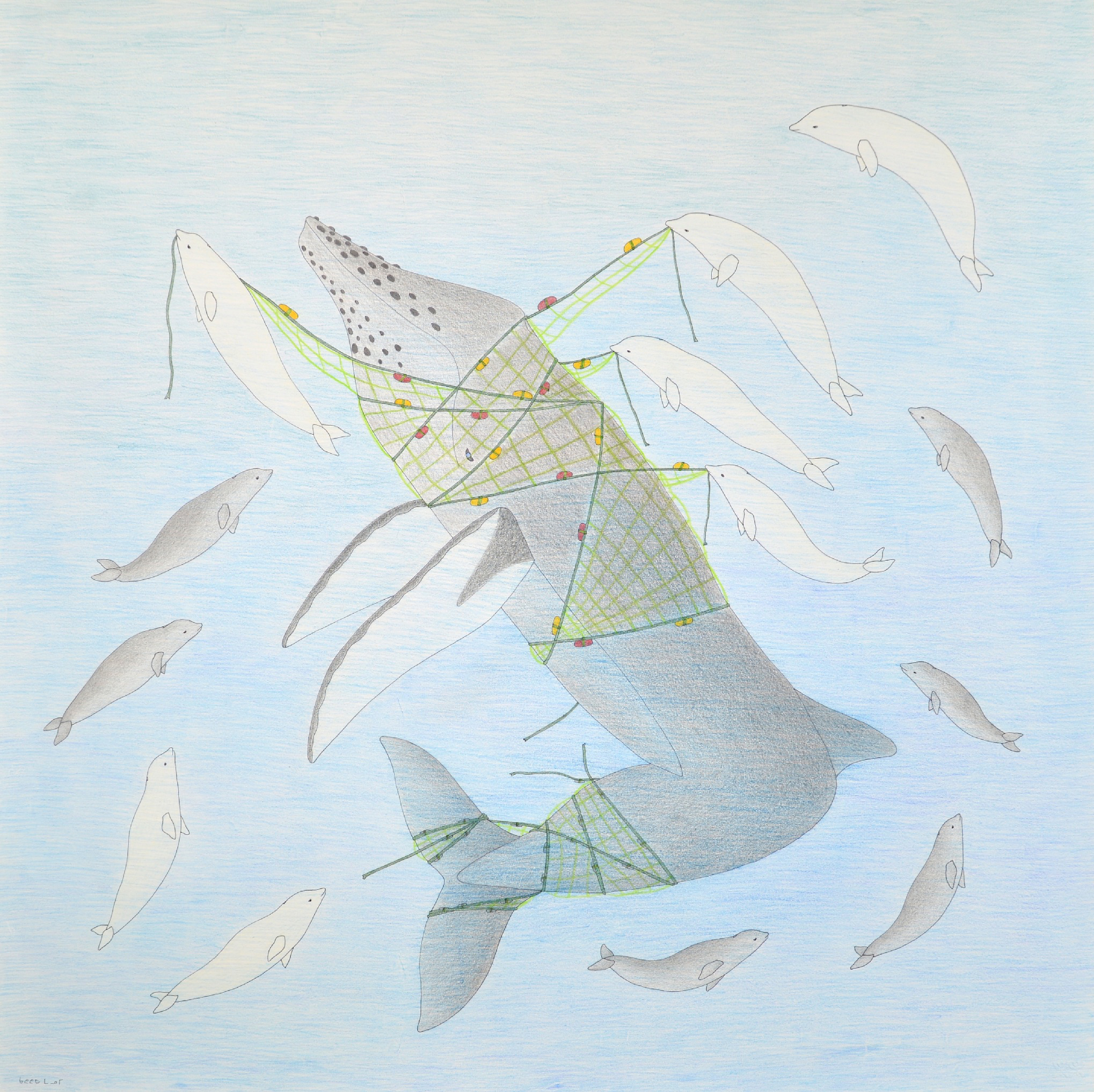 In his recent work, Manumie has placed a focus on depicting the impacts of climate change and other environmental issues, such as excessive whale hunting and littering. While whimsical and humorous at first glance, these images represent a troubling contemporary reality occurring in the Arctic. They often blatantly display melted ice separating either the hunter from his tools, the animals from the hunter, or the animals from the safety of an iceberg. Manumie’s works are laced with an empathy for the land, the animals, and his community who have seen firsthand the effects of these environmental changes over time.

Manumie has been translating his global awareness onto paper since the 1990s. Like most, his exposure to international tragedies like the Challenger space shuttle crash of 1986 and 9/11 were through TV and radio. For example, his piece Starving Ethiopian, while jarring, is a compassionate response to the Ethiopian famine of the 1980s which Manumie was exposed to through humanitarian aid TV commercials. It was said that Inuit communities gave the most donations to the cause, per capita in Canada, because starvation is something they deeply understood, having experienced it less than a generation ago themselves.

The local landscape and his own Inuit culture are major sources of inspiration for Manumie. Some works, like Old Time Movie, depict snapshots from Kinngait’s past while subtly reflecting on how technology has changed over the years. Others are rooted in Inuit stories, such as the many Inuralaat (little people) that appear in Manumie’s work—a legend of small humans told to the artist as a child. The Inuralaat, along with local animals, often interact with tools and garments that frequent Inuit iconography such as ulus, harpoons, and amautiit. Local animals also appear often, such as various birds, Arctic char, caribou, bowhead whales, narwhals, belugas, and more.

Manumie has a sharp sense of design which comes from his many years working as a printmaking technician at the Kinngait Studios. While this is evident in most of his compositions, his intricate abstracts are the most striking examples. Manumie often includes birds in these creative drawings which oscillate between transformation scenes and experiments in design. The artist is a bird expert and uses the animal almost as his muse, shaping and shifting their forms into complex and harmonious compositions.