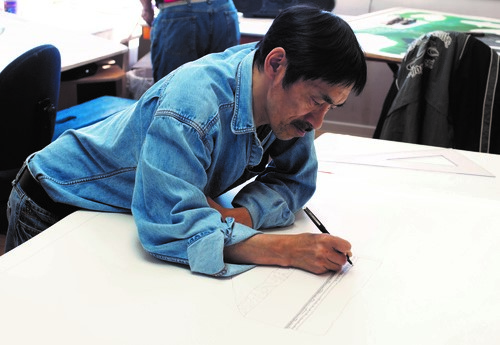 On view until June 13, 2022: the Biennale of Sydney in Australia, now in its 23rd iteration. Taking place every two years, the international art exhibition showcases work by compelling contemporary artists from around the world that speak to a selected theme. This year’s theme derives from the latin word rīvus, meaning small stream of water. It focuses on dynamic water ecosystems inclusive of plants, animals, mountains, and more, as understood through the lens of Indigenous knowledges. Through this perspective, non-human entities are seen as beings with a right to life that must be protected.

Kinngait artist Qavavau Manumie’s drawings fit this theme like a glove. Known for his thoughtful drawings that reflect on climate change in the north, Manumie’s works playfully present these issues in playful and surreal ways, including from the perspectives of the animals themselves. In keeping with the curatorial statement for rīvus:

“rīvus invites several aqueous beings into a dialogue with artists, architects, designers, scientists, and communities, entangling multiple voices and other modes of communication to ask unlikely questions: Can a river sue us over psychoactive sewage? Will oysters grow teeth in aquatic revenge? What do the eels think? Are the swamp oracles speaking in tongues? Do algae reminisce about the days of primordial soup? Are waves the ocean’s desire? Can a waterfall refuse gravity? Considering the water ecology’s perspective entails a fundamental shift in understanding our relationship with the rest of the natural world as a porous chronicle of interwoven fates.”

Born in 1958, Manumie has become known for his intricate compositions in ink and coloured pencil. His work demonstrates a range of stylistic abilities, from the very literal to the more expressive. Manumie’s thematic concerns include depictions of Inuit legends and mythology, Arctic wildlife, and contemporary issues that affect the North such as pollution and global warming. In addition to his career as a prolific graphic artist, Manumie is a master printmaker. He has been involved at the Kinngait Studios for over three decades.

This is the second time Manumie’s work will be shown at a Biennial exhibition; his drawings were first exhibited at the inaugural Toronto Biennial in 2019, to much acclaim. In 2020 Manumie’s work was included in a group exhibition in Warsaw, Poland titled The Penumbral Age: Art in the time of Planetary Change. His work continues to thrive on the international stage.

For more information about the Biennale of Sydney, click here.