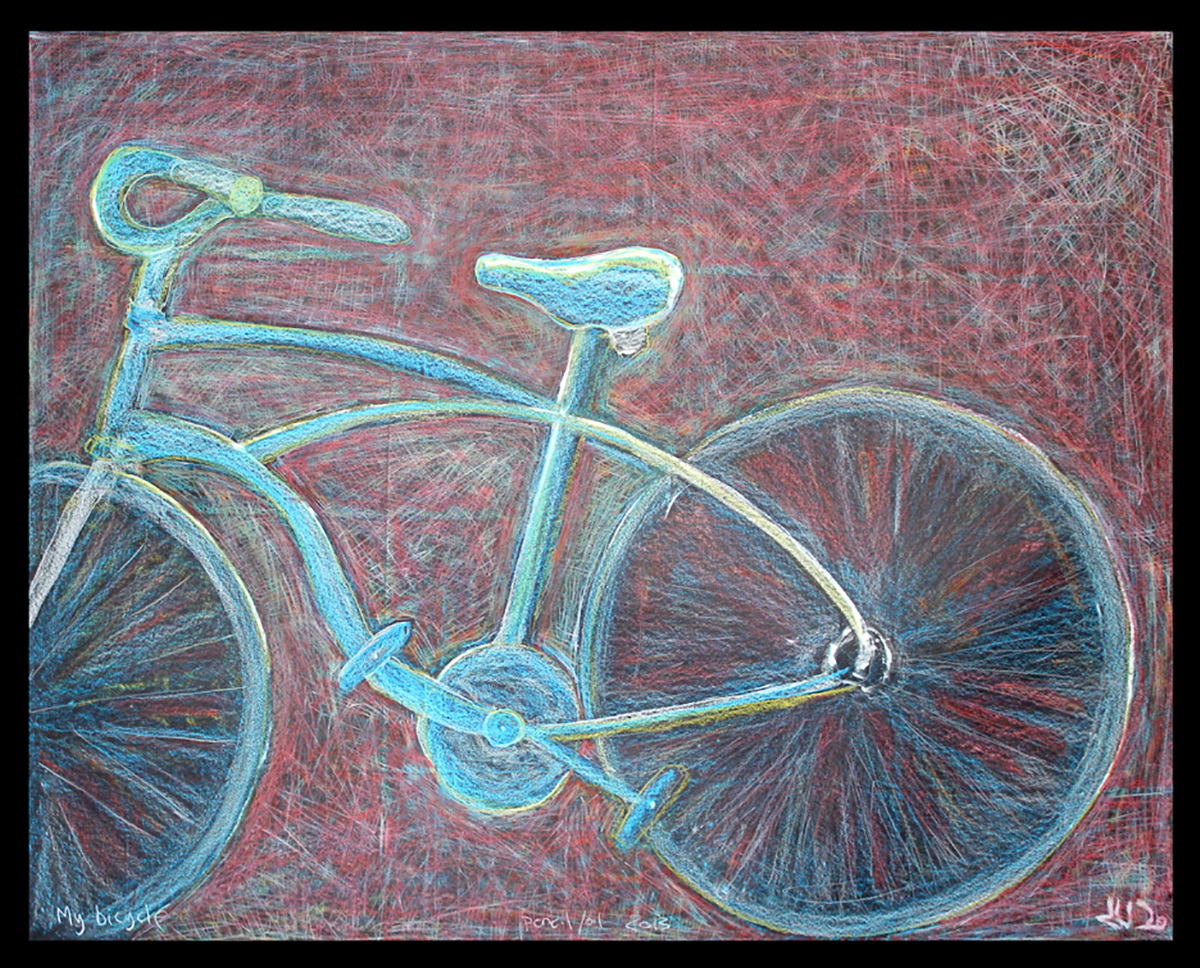 “I was thinking of still life painting.  I looked at the objects in my house and in the studio and outside and used them as inspiration.  Some were taken from my sketchbooks.  When I would find the subject outside, I would borrow a camera, take a picture and work from that.  Some I arranged to create the composition and others are drawn just as I found them.”[1]

Once again, Jutai Toonoo surprises us.  He has often explored subjects that interest him in a series, such as the body of work presented at this gallery two years ago, Body Contemplation, or his series featuring cancer cells.  In Still Life, however, he focuses on a genre of visual art  that has roots in Western art history but few precedents as a focus in either traditional or contemporary Inuit art.

Still life is the genre, although Toonoo equally explores colour, form, and texture in his drawings.   A potted plant becomes a study in nuanced primary colours – red, blue, and yellow brought to life by the mixture of combined hues.  A bicycle painted in shades of blue is placed against a mottled, burning red background.  A pile of laundry in muted tones nestles within a dark but enlivened background in such a way that the subject matter appears almost as a landscape.  Similarly, the play of light and colour over a reclining nude appears at times almost an abstracted landscape.  In several of these works, the harmony of colour gives way to startling contrasts.  A view through a window to a blizzard outside creates a dazzling square of light against a subtly arranged composition featuring a chair, apron, and hat in mottled red and brown tones.

More so than his contemporaries in the Kinngait Studios, Toonoo often mixes media, adding oil pastel or charcoal to pencil crayon.  Less precise than pencil crayon or felt-tip pens, oil pastel lends itself to broad strokes and depths of saturated colour.  The texture achieved in these drawings, through the use of integrated media, serves to remind viewers that Toonoo is also a sculptor.  He smudges the background of an oil stick drawing that features an arrangement of gears, playing the depth of the browns against the flat white of a snowfall.  The result lends the drawing a distinctive three dimensional quality.  Nuts and bolts appear to float within an undulating space, which is a riot of colour and texture from the overlaid strokes in varied but related shades. Dying yellow flowers, as a momento mori, retain their beauty even as they are being smothered by the first snowfall.

Several of the works in this exhibition reference Toonoo’s interest in social commentary.  A Coca Cola can is shown as discarded along with other garbage, a symbol of a large international corporation leaving its mark on Cape Dorset.  An image of a stove, at first seemingly domestic and straight-forward, provides an opportunity to reference the drug technique of hot knifing.   A colourful study of waving papers hanging from a pipe provides an improbable contrast to the lightly drawn image of a suicide in the background.

This exhibition marks yet another significant development in the continually changing and evolving art of Jutai Toonoo.  Even as he captivates us with this new focus, we wait, with great interest, for the next installment.