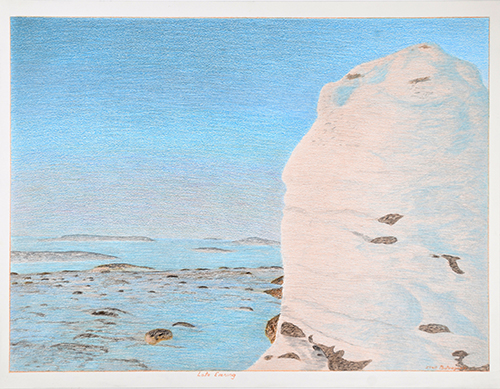 Artist Itee Pootoogook (1951–2014) was known as Kinngait Studios’ most meticulous draftsman. Born in Lake Harbour (Kimmirut), Pootoogook moved with his family to Cape Dorset (Kinngait) as a young child in the late-1950s. Like many, he was born into an artistic family: established carver Paulassie Pootoogook was his father and artists Kananginak, Eegevudluk, and photographer Peter Pitseolak, were his uncles. While his foray into artmaking was surely influenced by his family, Pootoogook had a unique style and practice which largely involved conducting drawing experiments using photography and its conventions as reference and inspiration. The artist began drawing in the late-1980s and went on to produce work for the next three decades depicting the many figures and scenes that made up his community.

Pootoogook was one of the first artists at Kinngait Studios to work directly from photographs, often taking parts or figures and altering them slightly to make the composition, or colours, his own. He took many of the photographs himself, and also used pictures taken by manager of the lithography studio, Bill Ritchie. Pootoogook also worked closely with Tim Pitsiulak (1967-2016), one of the few men who worked in the drawing studio and often shared photographs with him.

A number of the artist’s graphite drawings have been identified as being based off of Peter Pitseolak’s photographs taken in the 1940s-50s. Commonly referred to as the first Inuit photographer, Pitseolak acquired his first camera in the 1930s and developed them with his wife, Aggeok, in a hut built partially from lumber salvaged from the wreck of the Nascopie HBC supply ship. Like Pootoogook, Pitseolak captured community life as he saw and experienced it.

Pootoogook’s drawings based from Pitseolak’s photographs bring past memories into the present moment. The artist emulates pre-settlement life in graphite in homage to the original black white film photograph. In other drawings, he adds colour to the scene, a feature the artist is often recognized for. Striking examples include Composition (Figures on the Land), 1995–96, based on Pitseolak’s photograph of his family members, including from left to right: Kananginak, Eegevudluk, Paulassie (father of Itee), Pudlat, Salamonie, Pootoogook, and Ningeookaluk. Composition (Standing Figure), 1995-96; Igloo, 2010; and Composition (Sealskin Clothing), 2000, likewise recall memories from south Baffin Island’s past.

The selection of works in Feheley Fine Arts’ exhibition Itee Pootoogook: Photographic Memories range from the beginning (1990s) to the very end (early 2010s) of the artist’s three-decade long career and feature a diverse array of subject matter that recalls community life, both historical and contemporary. The thread of photographic influence that runs through Photographic Memories is present: a young boy poses in front of a wall, the lithography shop’s front step cropped according to the rule-of-thirds, and an airplane captured during flight—these, and more, evoke looking at the world through a camera’s viewfinder. Through his use of both historical and contemporary photographs, Pootoogook’s drawings eloquently bring together memories from past and present.