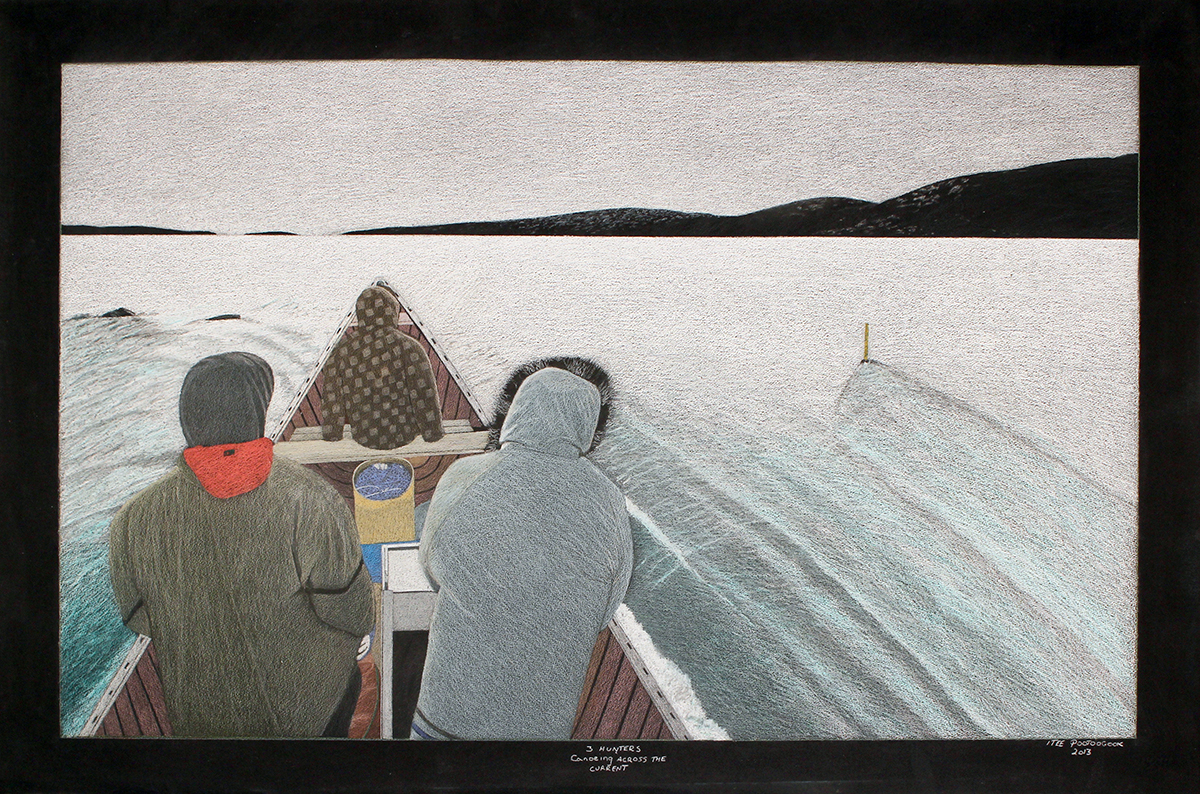 In 1972 the National Film Board of Canada established an animation workshop in the unlikeliest of places: Cape Dorset. Just over eight minutes into the workshop’s lauded first release, Animation from Cape Dorset (1973), a hand-written title card announces a segment entitled, “New photos by Itee Pootoogook and directed by same person.”[1] Pootoogook was then in his early twenties and his brief stop-frame sequence of colour snapshots, set to a minimalist piano track, offers a casual glimpse of everyday life in the community: young people wearing Mack jackets and bell bottoms, playing music, hanging out.

Itee Pootoogook, who began drawing in the mid-1980s, has long worked from photographs, including his own – shot in the 1970s with a 110 camera and mailed south for developing – and Peter Pitseolak’s, published in People From Our Side (1993).[2] Bill Ritchie, manager of the Kinngait Studios, recently purchased a point-and-shoot camera for Pootoogook; the artist, it turns out, didn’t take to the digital and prefers to use photographs shot by others. With a few exceptions, such as Igloo and Belugas, Pootoogook’s drawings in Itee’s Kinngait are based on recent photographs taken by his fellow artist, Tim Pitsiulak, and by Ritchie. Forty years after Animation from Cape Dorset, Pootoogook’s interest still lies in the here and now.

It has taken considerable time for the Kinngait Studios to embrace Itee Pootoogook’s particular vision. Although Peter Pitseolak traced from photographs when making figural drawings, such practices were, historically, discouraged.[3] Today, Pootoogook chooses a photograph from the thousands stored on the Studios’ computer (sometimes in discussion with Ritchie, Pitsiulak, or Niviaksie Quvianaqtuliaq), and an 8 ½” x 11” colour printout is made for him. The photographs are rarely manipulated prior to output; the exception in this exhibition is Cape Dorset, Kinngait, inspired by a panorama comprised of three photographs stitched together by Ritchie using Photoshop.

Pootoogook’s source photographs are akin to found images, in that he accepts their content and framing as given, instead exercising his agency through their selection and interpretation. A photograph transforms – indeed, abstracts – the tangible, three-dimensional world into a two-dimensional representation, an effect the artist amplifies with his drawing technique, particularly in such works as Iceberg rests on the reef; Three hunters; Lichens on the rocks; and Windless day, an old iceberg, in which he eliminates surface detail and builds form with flat, relatively unmodulated fields of coloured pencil. The influence of the snapshot – a term, incidentally, derived from hunting[4] – on such drawings as Three hunters canoeing across the current and Harpooned walrus underneath the ice is evident in their restricted cropping and vantage points; these photographs were shot on the fly, by the passengers of boats skimming over frigid waters.

The relationship of photography to time is especially important in considering the artist’s work. A drawing, unlike a photograph, is neither mechanical nor instantaneous: it reveals the process of its making and for Pootoogook, is the product of prolonged effort. After roughing in the scene with a pencil, he works top-down, colouring in areas with an intensity and pressure that burnishes the textured black paper he prefers.[5] Every instantaneous photograph, however, fixes a moment that is at once immediately past and preserved for the future. Pootoogook’s drawings forever suspend just a few such moments, saving them from disappearing and in the process, transforming them from ordinary to extraordinary and from private to public.

Itee Pootoogook’s work is grounded in processes of mediation, distillation, and distantiation. Yet its origin in photography means that it retains an inescapable connection to the real. A Tim Pitsiulak photo of his wife Mary is the source for Clam digging; a frustrated Jimmy Manning, struggling to get his boat engine working, is pictured in Working on his canoe; bloody chunks of Cut up walrus meat lie nearby Tim Pitsiulak’s distinctive boat; Qaqaq Ashoona’s home cabin at Saatuqittuq is the subject of Electric fan in an abandoned shack. The generic titles Pootoogook assigns to his work reveal little. Not everything in Itee’s Kinngait is intended for public consumption.

In 1973, the year Itee Pootoogook’s photographs of his long-haired, mini-skirted friends were featured in Animation from Cape Dorset, the annual print collection was dominated by anodyne images of birds, beasts and spirits. Such images satisfied market demand for a Cape Dorset that somehow existed outside time, neither participating in the present nor inventing “local futures,” to borrow James Clifford’s analysis.[6] Pootoogook’s new drawings underscore the fundamental tension that has been present in Cape Dorset since the advent of “Inuit art” – the gap between its life and its art. Itee Pootoogook is bridging that gap, and the art world is playing catch-up.

The author thanks Mishak Allurut, Robert Evans, Pat Feheley, Itee Pootoogook, Joemie Tapaungai, and Brad van der Zanden for their invaluable assistance, and is especially indebted to Bill Ritchie for so generously sharing his knowledge.