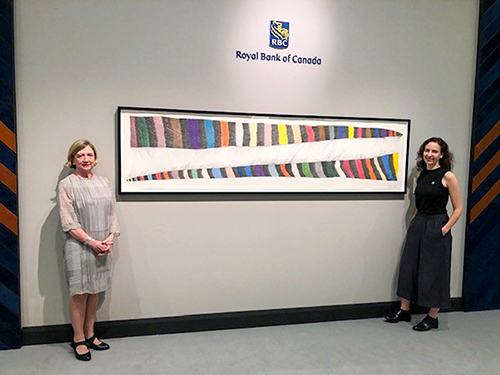 This week Pat travelled to London, England for Masterpiece London. The annual international art fair features 150 exhibitors showcasing art from all eras—antiquity to 2019. Masterpiece’s variety makes it one of London’s most anticipated art events of the year.

RBC, principal sponsor of Masterpiece London, welcomed works by contemporary Inuit artists to be featured in this year’s RBC lounge. Several drawings are by Shuvinai Ashoona, including her vibrant Composition (Rainbow Baleen) where the colour scheme was inspired by a Skittles commercial; a kitchen interior scene by Annie Pootoogook titled Father and Child at Kitchen Table, Cape Dorset; and Tim Pitsiulak’s Computer Generation which reflects on the impact of Facebook in the North.

Three contemporary Inuit sculptures are also in London, including a pair of snow goggles made by Iqaluit-based artist, Mathew Nuqingaq. The John Lennon-style glasses and their stylized caribou antler stand were immediately shipped overseas after stealing the show at Nuginqaq’s solo exhibition Masquerade, which opened June 13 at Feheley Fine Arts.

It’s not the first time the goggles have impressed British audiences—in 2017, Prince Charles and Camilla, Duchess of Cornwall, sported the goggles while on a three-day visit to Iqaluit. Nuqingaq’s goggles blend traditional and contemporary, in both material and subject-matter. He is also a well-known jeweller, drum dancer, and photographer.

Jutai Toonoo’s piece Tribute to Terry, which bears semblance with the curvaceous abstract sculptures made by British artist Barbara Hepworth, is a visual tribute to long-time Kinngait Studios manager, Terry Ryan. While Toonoo was known to bluntly address personal, social, and global issues in his work, Tribute to Terry is an elegant homage to a man whom Toonoo described as one who: “… went to the Arctic and changed the face of the north.”

The striking work Bird Man Transformation, made in 1990 by Natar Ungalaaq, also an actor and filmmaker, is a contemporary riff on the traditional Inuit story of human/animal transformation. The refined musculature of the Bird Man and his contrapposto-like stance almost recalls the ancient Greek male nude. With this piece, Masterpiece’s scope of antiquity to contemporary comes full circle, encapsulated in one fantastic sculpture from the Canadian Arctic.