Born in 1916 to a Jewish-German family, Oscar Cahén’s life was soon to be riddled with traumatic experiences. In 1933, at the onset of the Second World War, the Cahéns were robbed of their German citizenship and forced to flee. Cahén’s father, Fritz Max Cahén, was targeted as one of the leaders of an anti-Nazi resistance group, causing further anxiety to the family as they were always on the run (Grove, 5). By 1935, Cahén was selling his drawings, cartoons, and graphic designs to help support his family financially. As a refugee, Cahén sought out work in places like Prague and Britain but was forced to leave each as he was suspected of being a German spy (Grove, 6-7). Along with over two thousand other German-Jews, Cahén was captured in May 1940 and brought to Sherbrooke, Quebec where he was interned at Camp N as a prisoner of war. He would stay there for two long years. During that time, Cahén drew often and effortlessly charmed his fellow internees with his “Berliner” wit (Grove, 7). Until finally arriving in Toronto, Canada in 1944, Cahén had been perpetually haunted by a life of conflict and uncertainty (Grove, 10).

Around 1948, Cahén and other Canadian painters such as Harold Town and Walter Yarwood drew inspiration from the New York School and began experimenting with the gestural strokes and emotive colours typical of American post-war Abstract Expressionism (AbEx) (Grove, 12). The proliferation of works by artists including Kazuo Nakamura, Jock Macdonald, and other members of what would from then on be known as Painters Eleven, demonstrated to AbEx’s admirers Canada’s relevance as a site of cultural sophistication and worldliness (Grove, 45). According to Jaleen Grove, author of Oscar Cahén: Life & Work, “The group legitimized abstract art, inspired younger artists to follow avant-garde directions, and brought Canadian art into conversation with international contemporary art trends and critics” (Grove, 13). 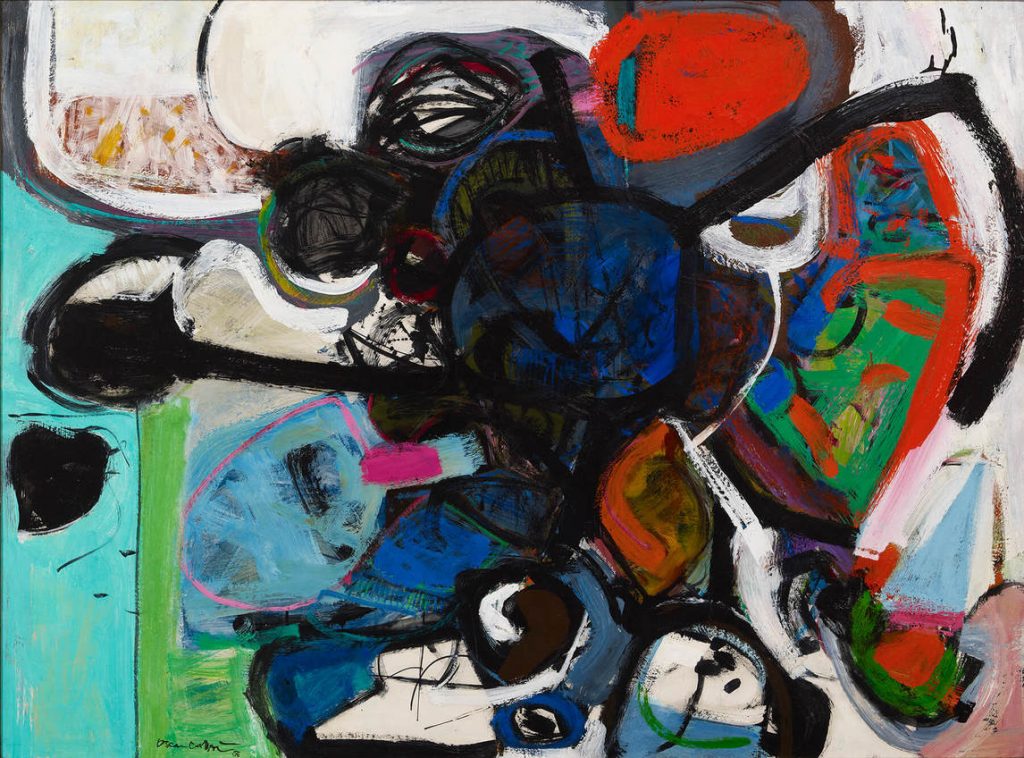 Painted in his last year of life, Traumoeba (1956) encapsulates everything about Cahén’s turbulent past. In abstract expressionist art, the application of paint itself is often equated with violence. The work features bold applications of reds, blues, and greens, balanced between nuanced neutral tranches in tones of cream and charcoal. Nonrepresentational cellular forms are grounded by vertical lines while branches of navy reach from one side of the canvas to another. The title of the work combines the words trauma, the German word for dream, traum, and amoeba, making reference to both the form and anguished sentiment which inspired Cahén’s work.

Though traumatized by the effects of war, Cahén’s experiences aided and informed his practice as one of Canada’s most prolific graphic designers, illustrators, and abstract painters to date.

See Traumoeba on view in the forthcoming exhibition Discovering Oscar Cahén (1916-1956), open November 13, 2021 at Feheley Fine Arts. This is presented in collaboration with Calgary’s TrépanierBaer Gallery.