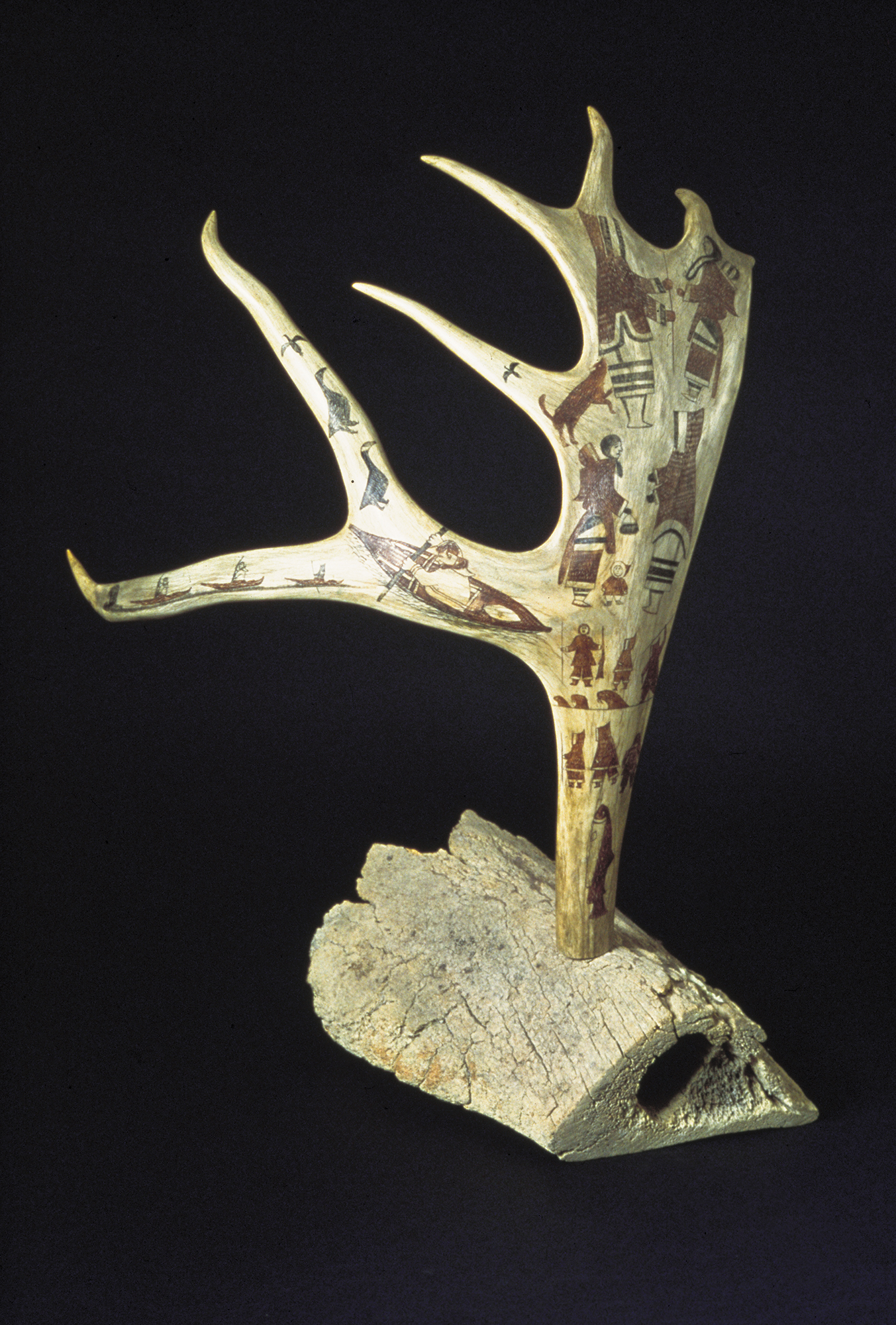 Sometimes one moment can become the axis around which a whole universe spins. The world remembers 1969 as the year of Woodstock’s quest for harmony and the first moon walk that became a celebration of man’s technological advancements. Meanwhile, in the Arctic the I were making their own advances, navigating the treacherous journey from traditional camps to modern settlement life. It was the year Toonoo and Sheojuke’s youngest son, Sam, was born in the fledgling settlement Cape Dorset, and the year Toonoo would die from a gunshot wound while hunting with his son-in-law. The changes of 1969 — technological, social and personal — continue to shape members of the Toonoo family today. The artists represented in this exhibition span three generations, and their circumstances mirror the changes in contemporary Inuit life experiences during that time.

Raised in the old ways and backed by Inuit spirituality, Toonoo and Sheojuke lived a traditional life emphasizing the value of work, the  rhythms of the land, and the centrality of familial harmony in an isolated nomadic camp. Now, the younger generations inhabit a modern world loaded with indoor hunting, MTV and the wage economy. While Sheojuke speaks only Inuktitut, her grandson Tytoosie converses readily in English. Typical of the era before the recognition of individual Inuit art personalities, Toonoo did not sign his carvings in the 1950s and 60s. Today, Oviloo brands the base of each work with her distinctive syllabics, and her brother Jutai inscribes both his name and poetic social commentary across the surface of his sculptures.

The artists of the middle generation hover somewhere between the old and new worlds, negotiating an identity that is at once introspective and worldly. Some now live in the ‘South’, others continue on Baffin Island, not far from the site of their ancestral camp. Their works reflect the accelerated pace of change in their expanding world, producing startling intersections: reminiscences of childhood blend with contemporary images of war, twin spectres of death and economic recession recur; ecstatic revelation  blooms from synthetic substance or traditional spirituality. “We didn’t get television here until 1975,” Oviloo recalls, “but I had already seen it [when in Manitoba for health treatment], so it was hard to say if it had an impact on my sculpture. When I first saw wars on TV as a child, it did affect me. I was afraid because I know history repeats itself.” The death of their father – first labelled an accident, later confessed as murder — haunts his children as they struggle to reconcile traditional and modern responses to grief and revenge. Family continues to bind them, laughter brings new joy, and a new generation is on the rise.

Oviloo and Jutai are already positioned as commanding ambassadors of contemporary Inuit art, creating  works that rarely conform to traditional assumptions about the style and substance of Inuit sculpture. These individuals are not victims of cultural and technological change, rather active participants steering a course through the complexities of contemporary life. What other reality would their art reflect?

Sheojuke had barely reached her early teens when her marriage to Toonoo was arranged. “When I first met him,” she recalls, “he was good at making things. When we were together, he would make tools. He also had a kayak. … He was very much a hunter and he had good dogs. He provided for our big family.” 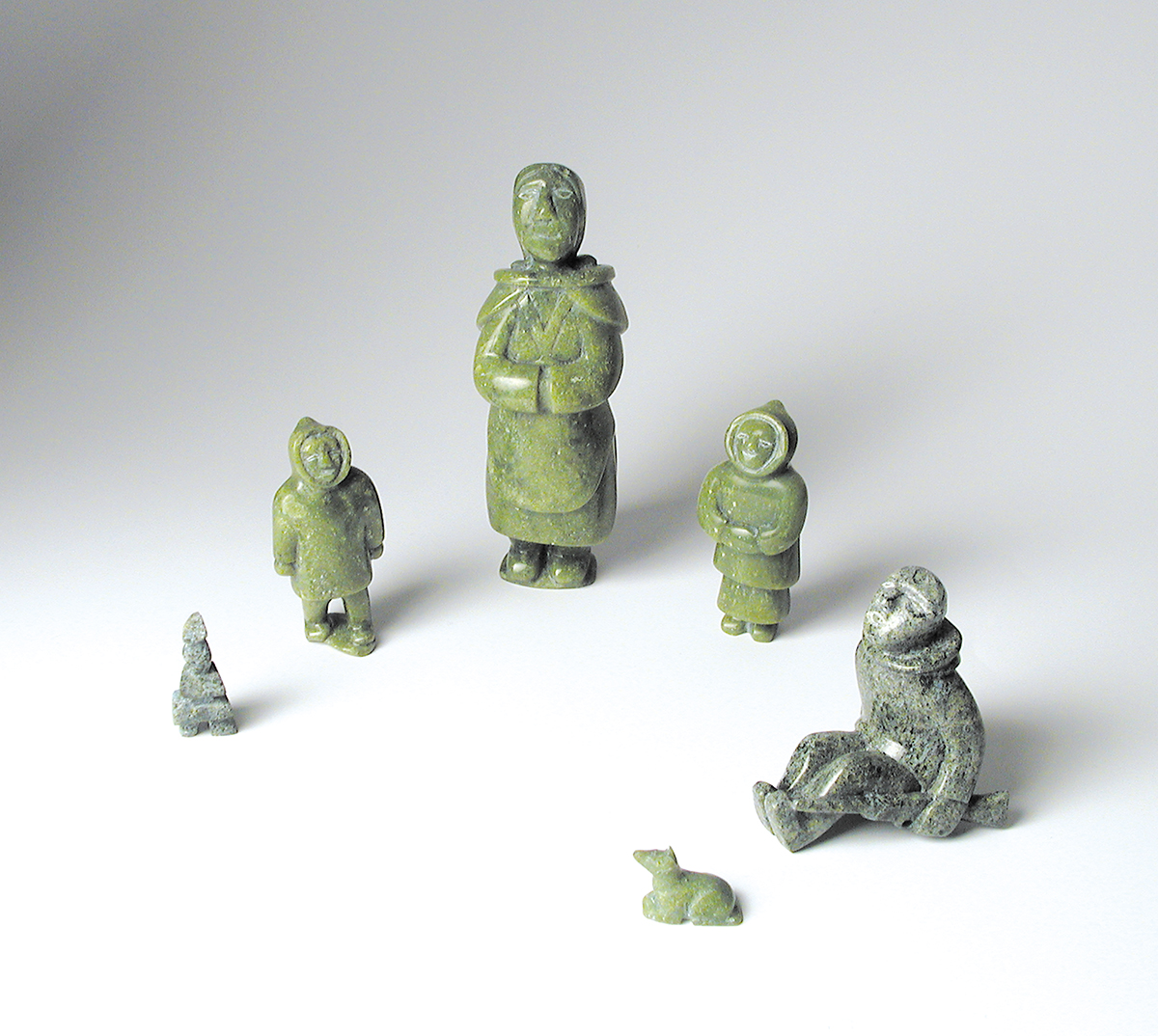 In the late 1950s, occasional construction work brought Toonoo to the young Cape Dorset settlement. Jimmy Manning remembers early days: “Toonoo was a very charming older man. He took great interest in younger people like me. He admired anything that was different and new. One day in the Hudson Bay Company store he called out, ‘Jimmy, Jimmy – come!’ He had a big white mark on his chin, he had accidentally set off shaving foam on his cheek and it was really puzzling him.” Terry Ryan also recalls Toonoo: “He was a pleasant, gentle soul. I first met him in the early 1960s. I visited his camp – he was traditional in every sense.”

Sheojuke remembers Toonoo’s early carvings, made from materials of the land. “He found a round piece of stone and so he made a figure with no legs, just the body.” His eldest sons recall sculptures of owls and engravings on ivory or antler with polychrome inlay. One of Toonoos last works depicting a totem-like grouping of figures, is kept in the permanent collection of the West Baffin Eskimo Cooperative in Cape Dorset.

Toonoo died while seal hunting with his eldest daughter’s husband. The story that came back in place of the man described an accidental shoot in the boat. A full twenty-five years later Mikkigak turned himself in to police, claiming to have killed his father-in-law. The family deferred to their mother’s choice and did  not pursue charges, guided by Christian spirituality blended with age-old camp mores emphasizing harmony over punishment. “I didn’t want them to learn hate. We love other people,” explains Sheojuke. “Toonoo was a great father to all of them and a great husband to me. He would never get angry with me. We lived traditionally and never had issues that would cause us to fight,” recalls Sheojuke. “I still expect to see my husband today. When my sons go out on the land and are not back when expected, I get really worried because of what happened to their father.”

Oviloo is the most established artist of her family and among the most renowned of her generation. Her first sculptures were made while a teenager when watching her father carve. She has worked actively for the past thirty years, enjoying International success in exhibitions since the early 1980s. Oviloo is a prolific sculptor with a distinctive modern style in which emotional undertones belie the cool exterior of her sleek figurative work.

Today Oviloo is the matriarch of a large and busy family, transplanted to Toronto for the past year. She enjoys the longer working hours for outdoor sculpting in the southern environment. “The only thing that I miss about Cape Dorset,” she considers, “is getting country food from my relatives!” Her work continues to revisit personal themes, such as her role as an artist or the untimely death of her father. 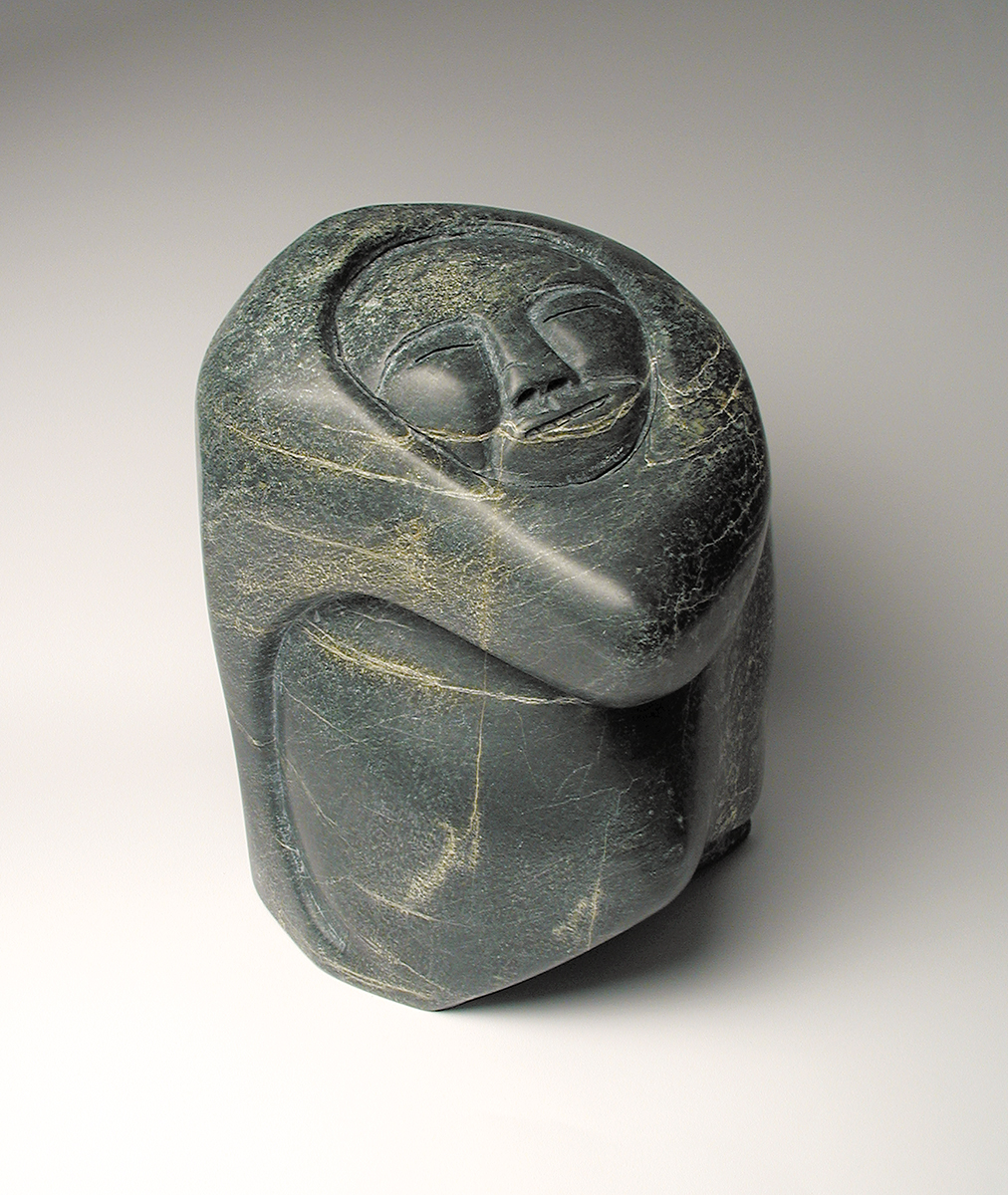 For Jutai, making art is an essential act — an attempt at balance in a world off-kilter too much of the time. “They’re my frustrations,” he says of his sculptures. Like children, he christens them, recounts their development over weeks or years, and Perishes their individuality while admitting he’s rarely entirely satisfied with the outcome. “A lot of the time my hands don’t listen to what my head is trying to do. Sometimes I get quite mad at the rock and just go at it!” The is an accomplished sculptor and jewellery maker, as well as a bundle of nerves and a wild poet.

Jutai began carving at the tender age of seven, recalling a kind of hero-worship for his father. He has alternated between office work and full-time stints as an artist. Recently his family moved to Iqaluit and Jutai has taken another desk job – for now. “After doing a thinking job, I know I’m going to burn out after a while and I’ll get the urge to carve again. I’m starting to find out where to get stone here. I enjoy Iqaluit, even though sometimes it’s a little bit rushed: traffic jams at lunch time and five o’clock! I walk to work, and I’m going faster than the vehicles.”

Jutai speaks eloquently of the spirit world, asserting that spirits are always with us — like veins under the surface of skin — imparting power and protection in times of need. Such traditional spirituality merges with Christian influences as Jutai recalls a moment in his life when he was, “in the presence of the hand of God – like a big dark rain cloud scoring across the sky so it is sunny in one place and yet there is a downpour where you’re standing. The spirit presence is like this dark cloud. Not scary, just powerful.”

Sam is the last son of Toonoo and Sheojuke, born in July 1969. In the past decade he has rapidly emerged as a rising star among the Cape Donet artists. Although he still works mostly in the small scale of young sculptors, his works project a presence and monumentality that greatly exceeds their actual size. Sam says he prefers sculpting in bone because it requires no sanding, yet his technical skill in stone is undeniable. He describes the process of sculpting as “drawing onto the stone” but has no plans to uy drawing on paper; the physicality of the carving process is more to his taste.

Sam’s subject matter is varied and has been evolving rapidly, as carefully observed animals and naturalistic figures in traditional dress are followed by more abstract artistic statements incorporating hands, masks, and spirits in the midst of transformation. Popular music and television are acknowledged yet subtle influences filtered gently into his creations. The artist notices, “I’m carving more ‘feelings’ now than what I was making before.” He works alone and does not credit any of his relatives with having motivated his artistic tendencies. Rather, his talent develops and his expressive works emerge as increasingly confident responses to his world, technology, the market and human interaction, seen through the filter of Sam’s distinct eyes. Jutai, his big brother, is already impressed: “I think Sam is the best carver in the family. He’s into his own thing.” 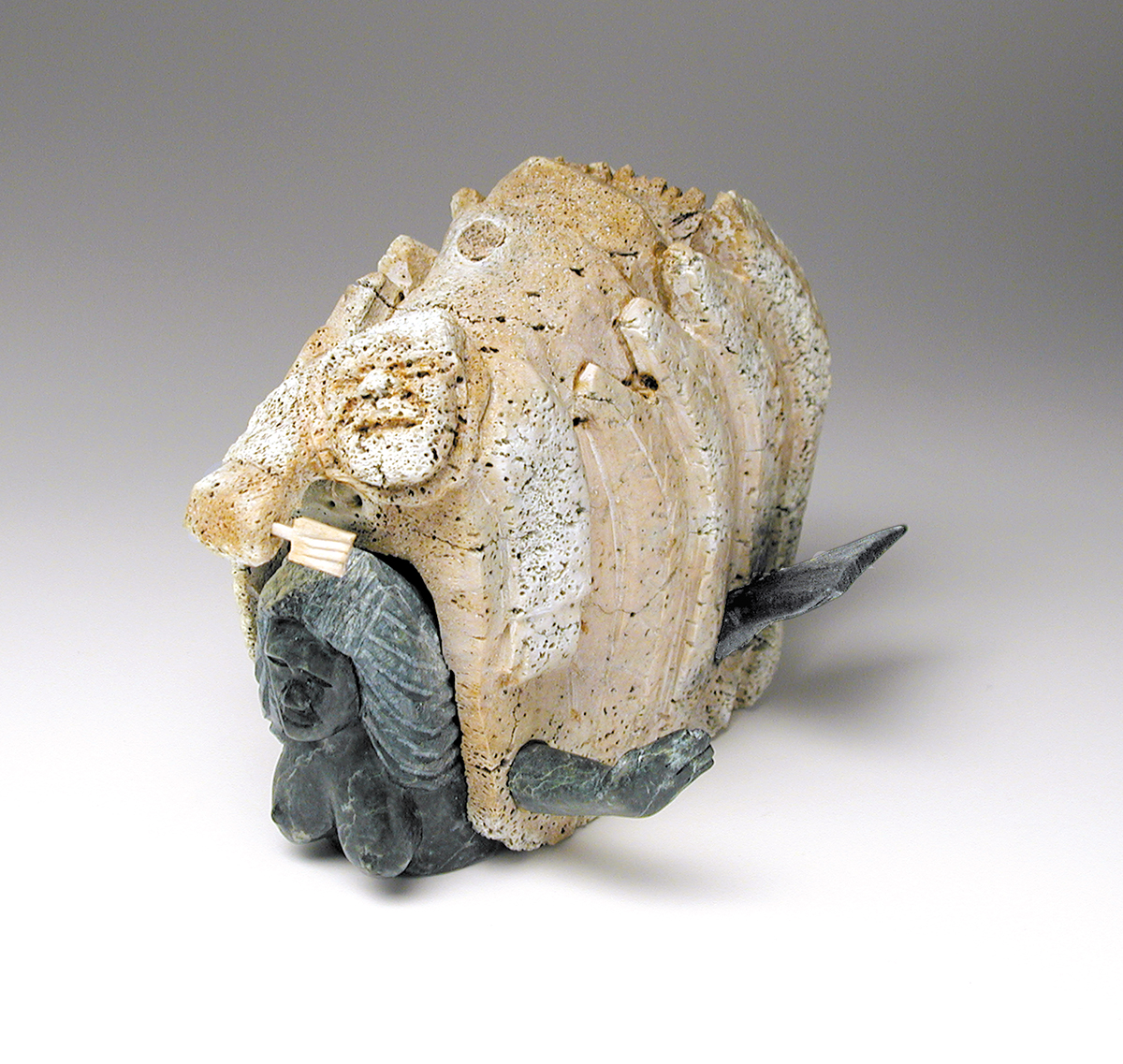 Sheojuke had been among those asked to try their hand at drawing in the early years of the graphics programme at Cape Dorset, while the family was living in the outpost camp of Tikitu and Lucy Qinnuayuak. There she would have experienced firsthand the novelty of drawing paper and the early success it brought to certain individuals, yet Sheojuke did not become a prolific artist in the 1960s. Her first print was released in the 1966 annual Cape Dorset collection, but the next was not made until thirty-four years later.

Sheojuke is proud to point out that print workshops in Cape Dorset in 2000 acquainted with the entire process of printmaking, from marking an image into the surface of a board or stone, to inking and pulling the edition by hand. With the confidence of an elder and the tenacity of a traditional woman, she deftly created linocuts, etchings in plexiglass and in copper, woodcuts, stencils and even stonecuts. Not one to rest on her laurels, she points out that she has not yet made a lithograph, but would welcome the chance. Although these are contemporary works, her prints reflect an elusive earlier era and bear elder’s subtle touch in choices of subject and spatial arrangement.

Three of Oviloo Tunnillie’s sons have joined the ranks of artists among Toonoo’s descendants. Tytoosie (1974 – ) has sculpted for more than seven years; Noah (1976 – ) participated alongside his grandmother in recent print workshops and has tried his hand at sculpting, and Etidloi (1982 – ) has recently been creating small sculptures of seals and inuksuit.

Not surprisingly, the eldest has the largest body of work to date. Tytoosie benefits artistically from the additional influence of his paternal grandfather, Kabubuwa Tunnillie, with whom Tytoosie spent much of  his youth. “I started after watching my mother and grandfather. He used to talk to me about sculpture, he told me to be a carver and showed me how to use the grinder and the dremmel.” Tytoosie’s current favourite subjects are transformations which he builds in swirling totems of faces, beaks, feet and wings.