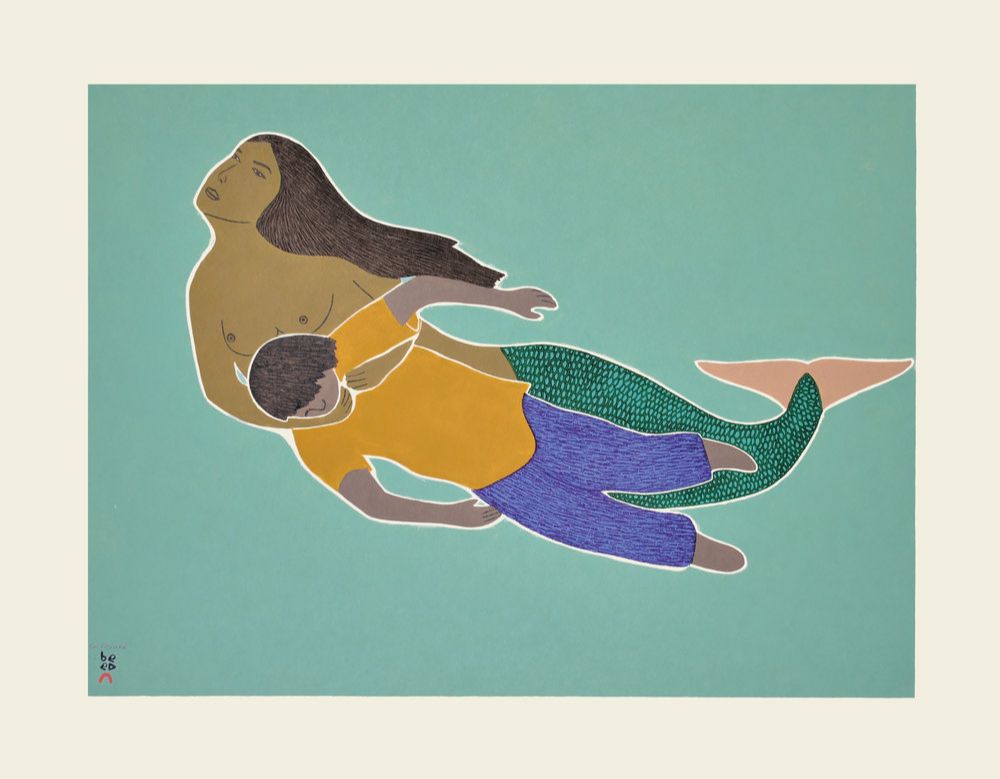 Often depicted as a mermaid-like being, the mythical sea spirit Sedna figures frequently in Inuit art. Across the Arctic exist a great number of different names for the legendary figure, including Taleelayo (“the one down on the sea bottom”) and Nuliajuk (“mother of all the beasts”). Her appearance in legends and mythology reflect the fact that for thousands of years, the lives of Inuit were governed by the unpredictable forces of nature. Stories like Sedna’s were used to make sense of nature’s ways. Passed along through oral culture, there are many different variations on the story of Sedna which differ among communities.

A commonly recounted version comes from Iglulik (Igloolik), Nunavut. It begins with a young Inuk girl (Sedna) who was stubborn about marriage. Eventually, she accepts a promising suitor who assures her that his hunting abilities were unparalleled, and he would be able to provide for her in abundance. The man whisks her away to an island where he reveals his true self: a bird in disguise.

Sedna’s father comes to the island to her rescue. As they journey home by boat, a group of birds chase after them, flapping their wings with so much energy that they create a violent storm on the sea. Frightened, Sedna’s father throws her overboard to steady the boat. But Sedna manages to cling on to the edge. Her father then cuts each of the joints of her fingers individually to release her into the sea. As her joints fall into the water they transform into animals: her top joints become seals; middle joints into walrus, and end joints, whales. Sedna herself sinks to the bottom of the sea where she becomes mother to all sea animals. She lives on as the benevolent spirit of the sea.

Sedna represented great power to Inuit living in coastal areas, as the sea animals she controlled were essential to their survival. It was believed that if hunters were not respectful of the animals or their spirits, such as hunting more than their share for example, Sedna would withhold the bounty of the sea. Though known primarily as a benevolent and nurturing spirit, Sedna also held the fate of the hunters and local people in her hands and would certainly teach a lesson to those who did not respect the harmonious agreement between human and animal, land and sea.

In art, Sedna’s hair is notably depicted quite prominently: either flowing gracefully, braided intricately, or tangled and unruly, indicative of a Sedna that has been crossed. When angered, Sedna’s hair was said of have become medusa-like and incredibly tangled, capturing the sea animals in her hair tendrils. To placate Sedna and restore between the hunters and the sea, a shaman was called upon to visit her, brush her hair, and explain to her the hardships of the people. The shaman would tell Sedna that the people had learned their lesson so that she would re-release the sea animals back to the locals waiting above, restoring harmony between all.

In earlier times, stories about mythical figures like Sedna were central to the Inuit way of life. Today, such stories provide inspiration for some of the most lyrical and elaborate images created by Inuit artists. Art doubly continues to provide a platform through which the wonderful and mysterious story of Sedna lives on in increasingly new and creative interpretations, through generations anew.