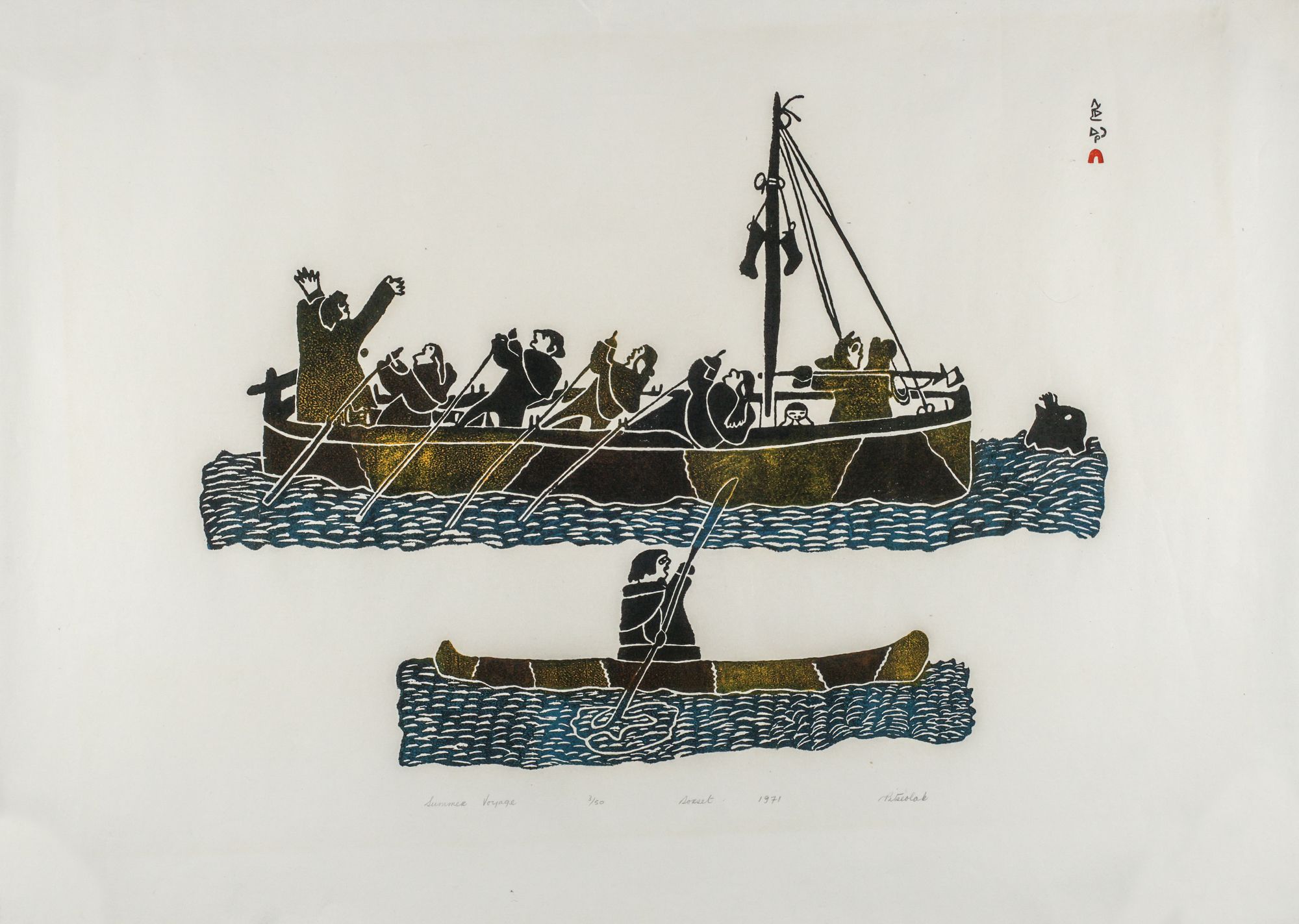 The theme of migratory camp life, when hunters and their families would follow the animals with the seasons, comprises many images in Inuit art. Migratory and semi-migratory hunting camps were a way of life for Inuit living in the Canadian Arctic up until the mid-twentieth century when many began to move into permanent settlement communities. Today, camping during the spring, summer, and fall hunting seasons is still popular, though the migratory lifestyle has largely been replaced by permanent settlements and wage economies. Artwork created by artists from the earlier generations function as a great way to relay the stories of earlier times.

Kinngait artist Pitseolak Ashoona (c. 1906–1983) represented the theme of migration in many of her graphic works. Born at the beginning of the twentieth century, Ashoona had travelled thousands of kilometres along the southern coast of Baffin Island with her family by the time she was five or six years old [1]. After she was married in the early 1920s, Ashoona and her husband would move between camps up to ten times a year with their young, growing family [2]. She would settle in Kinngait in the early 1960s and began to pursue artmaking as a way to support her family after the death of her husband. Ashoona went on to transform her earlier memories of life on the land into engaging subject matter for her graphics.

Born around the same time as Pitseolak Ashoona, Puvirnituq artist Joe Talirunili (c. 1906–1976) is perhaps best known for incorporating migration themes into his work. Like Ashoona, Talirunili was an artist who grew up in migratory camps and would later use the medium of art (drawings, prints, and sculpture) to present his stories from his youth in visual form.

The artist is best known for his incredible migration boat sculptures, known colloquially as “Joe Boats.” These works are based off an incredible and dangerous sea voyage across the Hudson Bay that Talirunili took after his baptism as a young boy [3]. The artist created approximately 30 sculptures of migration boats, each unique and incorporating another element from the legendary story. Today, in addition to being highly sought after by collectors, Talirunili’s boats and other works on paper function as vehicles for transmitting stories about the old ways of life to younger generations. As Ingo Hessel has written, “It could perhaps be said that Talirunili was not making art, he was carving history.” [4]