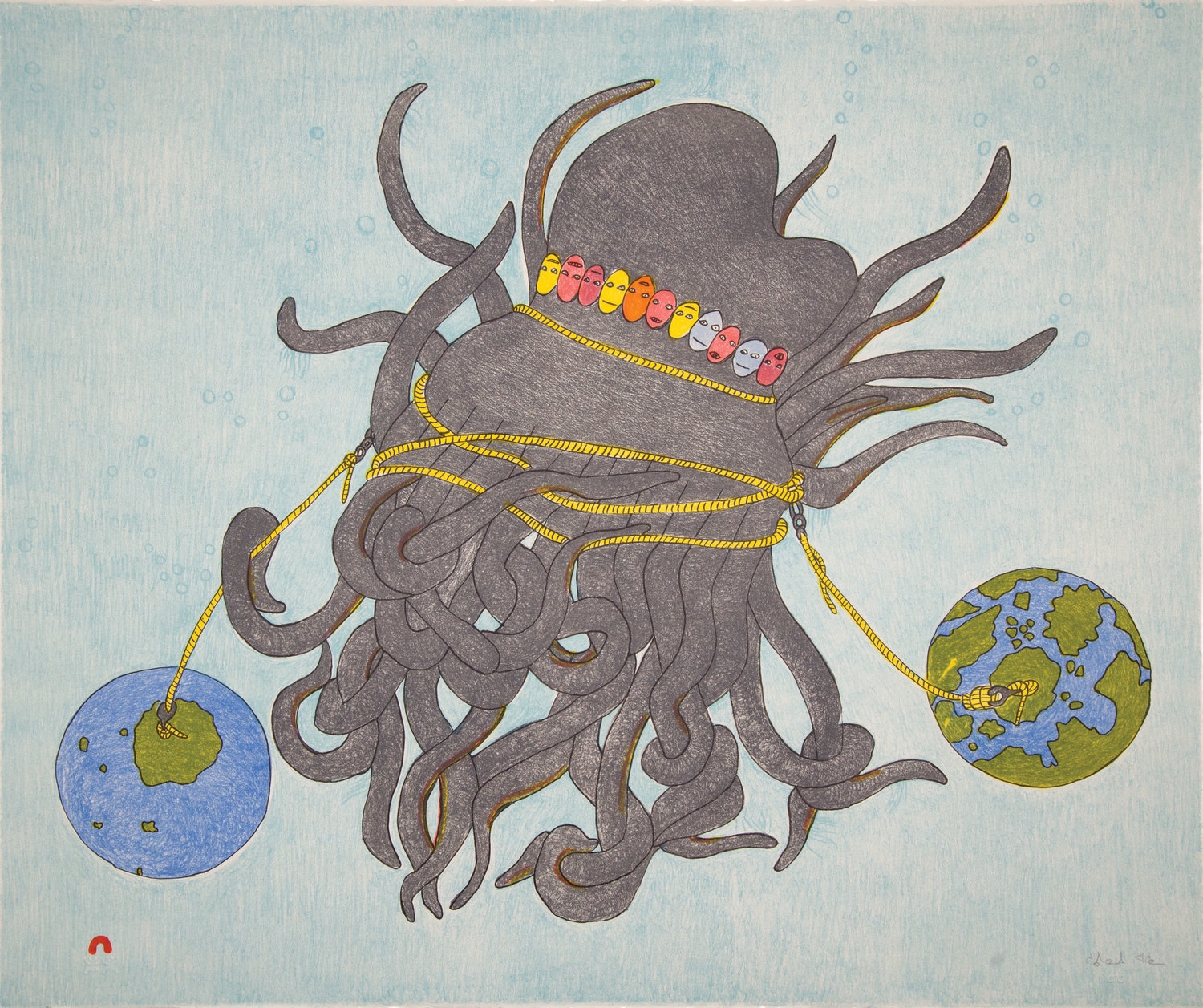 What do Shuvinai Ashoona’s Tentacles (2018), Ningiukulu Teevee’s Stepping Out (2020), and Ooloosie Saila’s Festive Owl (2021), have in common? They are all lithographs—a largely popular, yet little understood method of printmaking. The art of lithography made a late arrival to the Kinngait Studios as printers began experiments in the early 1970s. In 1975, lithographs made their debut in the annual print release, including works by Pudlo Pudlat, Pitseolak Ashoona, Lucy Qinnuayuak, and more. While early lithographs very closely resembled drawings, lithography today has taken on an entirely new life, integrating incredible colours and textures that are unparalleled by other methods.

How does lithography work?
The lithography process is complex and technical; it involves a chemical dance between various solutions. The process starts with a flat surface, either a stone block or an aluminum plate, on which the printmaker or artist draws an image with a grease pencil. A water-based solution of gum arabic is then washed over the surface, adhering only to the areas not touched by the grease pencil. The surface is then inked with a grease-based ink and continuously blotted with water, meant to repel the ink and confine it to the area of the original drawing. The first layer of ink is then printed onto a sheet of paper through a hand-cranked press. Each layer of coloured ink is subsequently applied separately. Lithography is unique from stonecut and etching methods as it does not require any carving or etching of the surface—the image is simply drawn directly onto the surface, allowing the lithography image to retain a drawing-like quality.

Lithography in Kinngait has come a long way from the first prints released in 1975. Some of the most iconic and visually complex prints were created using the method, like Kenojuak Ashevak’s monumental diptych Siilavut, Nunavut (Our Environment, Our Land) (1999), which celebrated the formation of Nunavut. Today, a new generation of artists like Ningiukulu Teevee and Ooloosie Saila continue to produce stellar lithographs, carrying on the fifty-year legacy of lithography in Kinngait.