“The Grizzlies” A showcase of Northern/Southern collaboration. 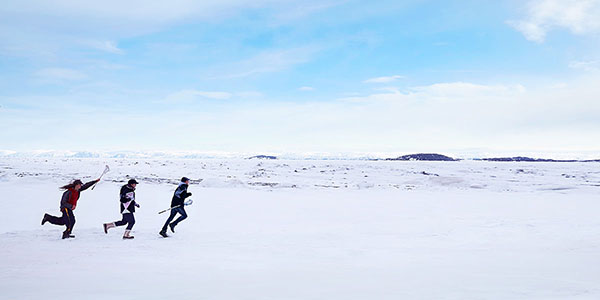 It’s inspiring to see a new Canadian movie centred around an Inuit story opening on screens across Canada. The heart-wrenching/heart-warming true story follows a series of Inuit students in the remote hamlet of Kugluktuk, Nunavut. The town was ravaged by one of the highest teen suicide rates in North America before a teacher encouraged the students to form a competitive lacrosse team. The movie outlines the students’ and the town’s story of redemption.

As with any independent Canadian production, the film took protracted efforts to finally reach the big screen – in this case nine years. But the wait has proven worthwhile. It’s particularly heartening for us in the Inuit cultural industries to see how the work serves as another model of North/South collaboration. The Canadian director, Miranda de Pencier, and Hollywood-based producer Zanne Devine teamed up with Inuit producers Stacey Aglok MacDonald and Alethea Arnaquq-Baril to create a movie that is authentic to the Inuit experience. Many first-time Inuit actors were recruited, after an exhaustive auditioning process that included more than 600 youth in over 25 communities across Nunavut and the North West Territories.

“The Grizzlies” serves as an important reminder of how the North/South relationship can be mutually beneficial. While the discourse around Indigenous and settler cultures in Canada can become fractious, it’s wonderful to see a story like “The Grizzlies” bring us together.

“The Grizzlies” is appearing on screens across Canada following its premiere on April 19th.