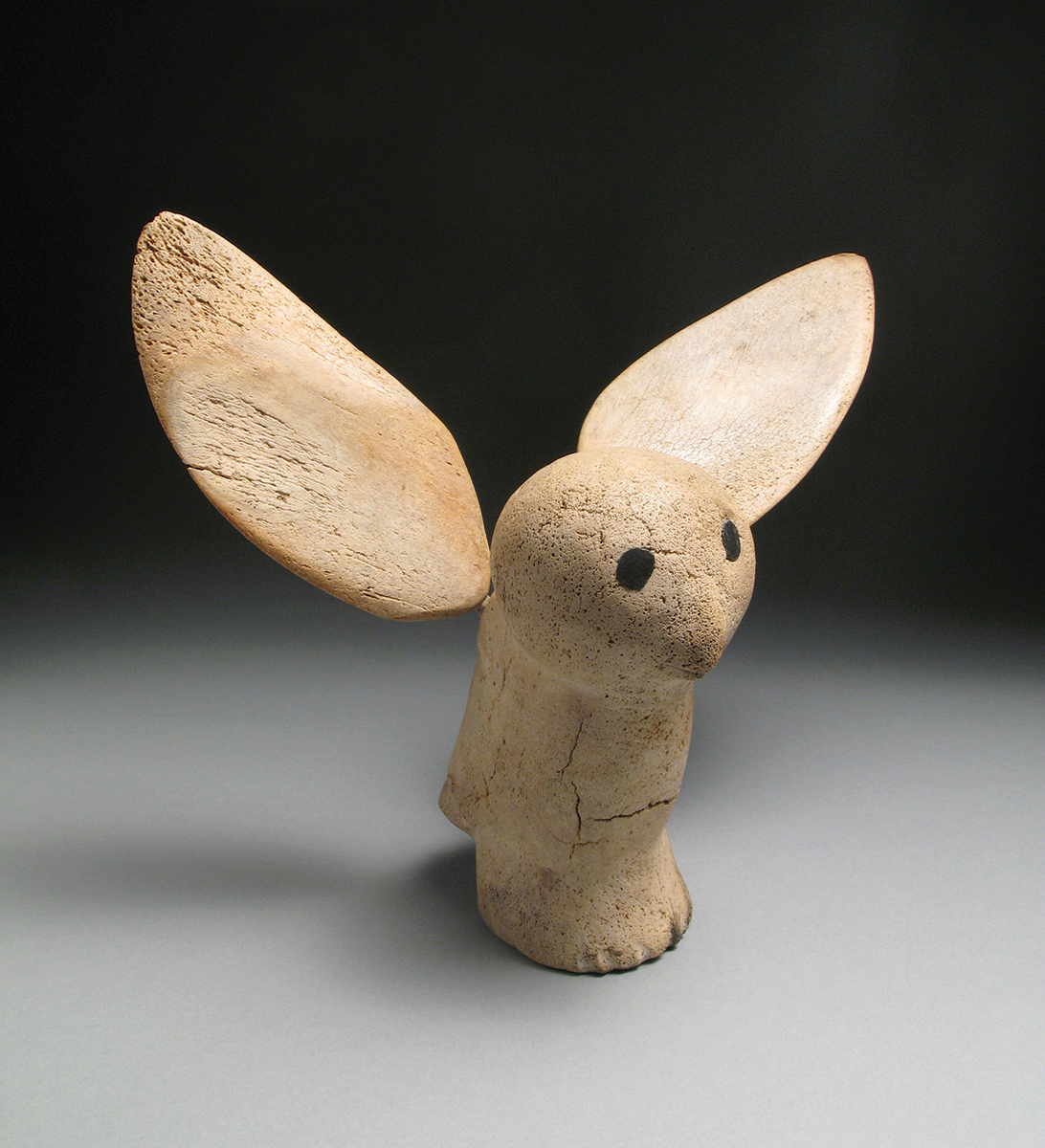 A great collection requires the passion, dedication and focus of a determined collector. Some collections of Inuit art are built with a specific community or artist in mind, while others are motivated by subject matter, media or period. All collections, however, take time, perseverance and attention to detail to become comprehensive and significant representations of an art form. Ene Schoeler built such a collection, focusing primarily on spectacular representations of Arctic birds—both in sculpture and graphics. This exhibition features a small portion of this collection.

Ene Schoeler worked with the Canadian Eskimo Arts Council (CEAC) for twenty-two years. Between 1967 and 1989 (when the Council was disbanded) her commitment to the Council resulted in extensive travel across the Canadian North. Ene’s time with the Council also offered her a unique perspective of Inuit art and the opportunity to fashion a breath-taking collection. Over the years, her collection grew and she acquired hundreds of sculptures, graphics and ephemera.

For over two decades, Ene held the position of Secretary to the Council, the longest contribution of anyone associated with the CEAC. Indeed, the secretary was “the only permanent point of contact” for the Council.[1] This continuity made Ene invaluable; she provided consistency and reliability to an organization that underwent frequent changes and much public scrutiny. The primary role of the CEAC, founded in 1961, was to guide the Co-operatives (and Inuit artists) regarding the distribution, promotion and sale of Inuit art. 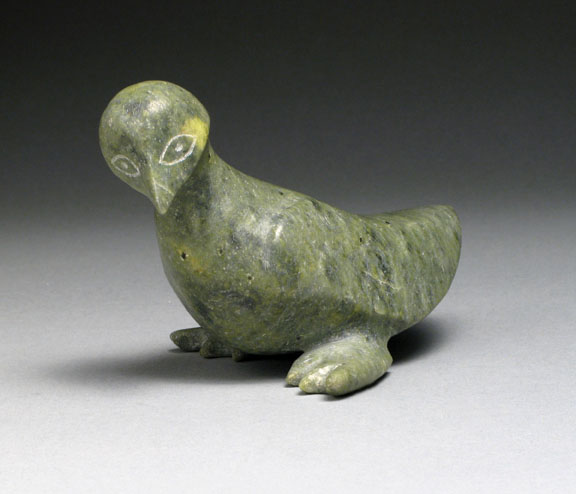 The Council advised on many issues, but it was best known for its role in establishing a record of quality and authenticity in the newly developed printmaking media. Early recommendations included conformity with international standards, such as limiting the size of editions, providing guarantees of authenticity, and establishing a jury process to ensure excellence and overall consistency. The Council also developed a unique blind embossed seal that was affixed to each print in the approved editions. Every year, Ene carefully aligned and stamped the prints from up to four settlements, with a minimum of 1500 prints each—a momentous feat. Many former Council members, and those who worked with the print collections, warmly remember Ene wielding this heavy metal stamp. The actual CEAC seal is on view during this exhibition, on loan from the Canadian Museum of Civilization.

Ene’s time with the Council acquainted her with the daily challenges of many Arctic communities, and consequently, the intricacies of marketing Inuit art to Canadian and international markets. Her expertise and experience became invaluable to this group, and she is most fondly remembered for her devotion to both Council and the individual members. Terry Ryan summed this up in the following : “She was very dedicated and devoted. Members would come and go but she would carry on and continue to make sure everything was taken care of, no matter the difficulties at hand.”[2] Inuit who travelled through Ottawa found a temporary home with her, and she often hosted dinner parties for members; deeds that surpassed the scope of her actual position. Even after the Council was disbanded, Ene worked tirelessly to prepare files for the archives. Those who knew her understood that she was a very special woman.

Sculpture and Graphics in the Schoeler Collection 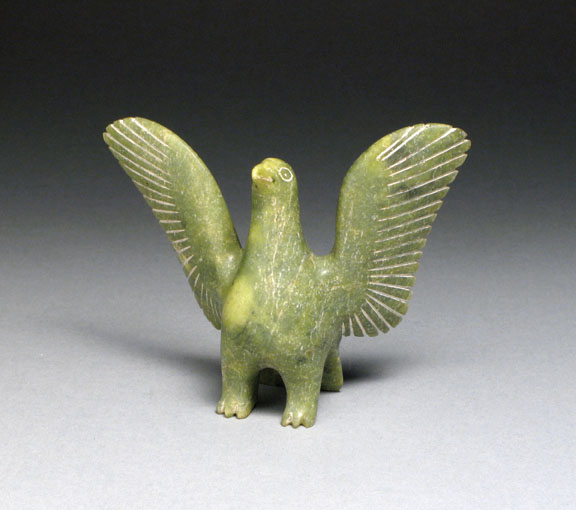 The works of art in this exhibition highlight the time period that Ene Schoeler spent with the Council. She approached collecting with the same focused determination as her work. As a result, Ene developed a comprehensive assortment of endearing and small-scale (many hand-held) sculptures from across the Canadian Arctic. The collection is consistent in strength and personality, which testifies to the character of the woman who selected it.

One look at these works of art reveals the raw talent that captured audiences many decades ago. BABY BIRD  portrays the hesitant stance of a young bird negotiating its first steps. The artist challenges the medium’s cold nature and solidity with thinly carved feet, and the bird’s inquisitive expression. Similarly, BIRD WITH RAISED WINGS also depicts a young bird, as the difference in the wings’ proportion to the body suggests. The young bird precariously balances its wings above its head, perched to soar, a fearful expression upon its face. The whalebone originates from the coastal settlement, Pangnirtung, once a whalers’ station.

Sculptures of birds with raised wings gained popularity largely due to Cape Dorset artist, Abraham Etungat’s representations of birds of spring. These delicate creations defied logic as the sculptor tested his talents by creating thin, almost translucent wings stretched high above their bodies. The poised stance of BIRD OF SPRING carries the artist’s signature style. Eliyakota Samualie’s JOYOUS BIRD  harnesses the artist’s talents as a sculptor; skilled workmanship conveys a silhouette that leads the eye around the stone’s contours, simultaneously evoking the graphic character of the artist’s drawings.

A variety of birds inhabit many areas of the northern landscape and, they have become a favoured theme for Inuit artists. Cape Dorset artist, Latcholassie Akesuk, took pleasure in carving birds. Often large in the waist, with distinctly fashioned eyes and legs (not talons), Akesuk developed an exceptional sculptural style, which is exemplified in the exhibition by WHITE OWL. 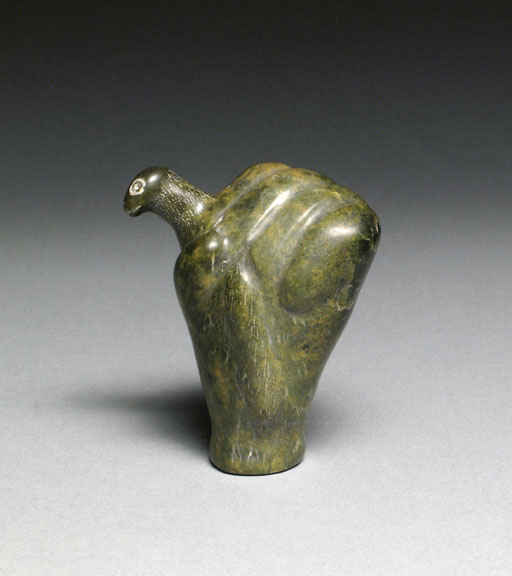 The prints in the collection not only exude the energy and spirit inherent to birds, but also the quality and strength of visual cohesiveness running through the sculpture collection. Lucy Qinnuyuak’s SPECTATOR BIRDS elicits a playful liveliness with a flurry of wings. Similarly, SUN BIRD shares this activity and the artist cleverly applies a series of lines to further emphasize the bird’s movement. Tye Adla’s THE RED OWL radiates vibrancy and strength with its bold composition and striking colours. Jessie Oonark’s OOPAK also carries this graphic force, although with a hint of delicacy; the bird’s body is speckled with a pattern that recalls the intricate designs of the artist’s works on cloth. Alternately, William Noah’s detailed rendition of birds walking on the land, SAND CRANES, captures the naturalism of these birds’ activities.

The prominence of birds and nature in Inuit art is a reflection of their importance to Arctic communities. The space where birds and humans come together is also a recurring theme in Inuit art. In this selection from the Schoeler collection, this intersection is best demonstrated with Martha Kopalie’s BIRD IN THE HAND; an exquisitely carved, hand-held sculpture that merges the human and avian world in one piece. The sculpture brings to mind an old saying “A bird in the hand is worth two in the bush.” This connection is perhaps both literal and metaphorical. At a time when we contemplate our relationship with our environment and the potential that green shifts in policy may offer, Ene Schoeler’s collection reminds us of the abundance and natural beauty that was easily found in the Canadian Arctic during her travels.