In 1985, Marie Bouchard completed research in Baker Lake for her collaboration on a major retrospective of the work of noted graphic artist, Jessie Oonark.  This research led Marie to an awareness of the superb tradition of the creation of wall hangings which, in Baker Lake, stemmed back to the 1960’s.  In 1986, Marie Bouchard and her husband, Jim McLeod, moved to Baker Lake from Winnipeg where Marie aimed to continue exploring the social and cultural history of the area.  They lived there for the next 10 years.

When Marie arrived, the first generation of these artists – including Marion Tuu’luq, Winnie Tatya, Elizabeth Angrnaqquaq and Mary Kuutsiq – lacked the necessary supplies and support to carry on this traditional art form.  Over the next decade, she assisted these artists in their endeavors, providing supplies, financial support and marketing.  With her encouragement this tradition was both revived and expanded, resulting in a renaissance in the 1990’s of the creation of these exquisite works of art.

Over the years, Marie and Jim assembled their own private collection of wall hangings.  This celebrated and comprehensive collection reflects this astonishing period of creativity.  It has been the subject of research and study and it has toured in exhibitions both nationally and internationally. 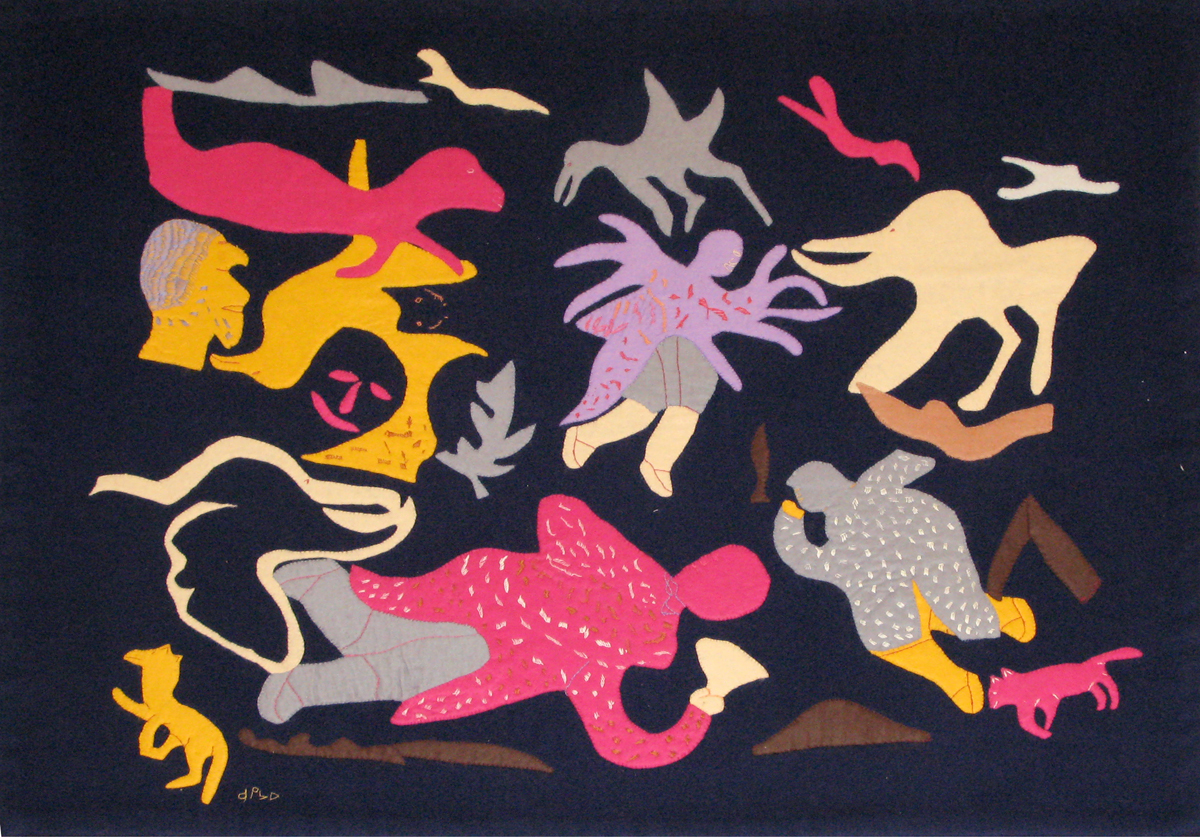 Feheley Fine Arts is proud to present this important exhibition and sale of these extraordinary works of art.

Note from the collector:

It is hard to believe that I have now been back in my hometown of Winnipeg longer than the decade spent in Baker Lake, Nunavut (then Northwest Territories). My time in this Inuit community was and continues to be an experience that has influenced and defined my life in a profound and lasting way. The luminous skies, bright cold days, the laughter of women and children, and my crammed little Baker Lake Fine Arts shop remain fond memories. It is also where my husband Jim and I built a house, started a family and along with our new son Zachary, immersed ourselves in a different culture and way of life. Along the way, we established lifelong friendships with the local artists and with collectors, scholars and art dealers from all over the world who shared the same appreciation and love for the art of the Inuit and all things Arctic.

Since the 1960s, the Inuit women of Baker Lake have used their sewing needles – an essential tool for survival in traditional times – to visually reconnect Inuit to their land and celebrate their cultural survival and a reclaiming of their homeland, Nunavut. Working primarily with wool cloth, felt, and cotton embroidery thread, the women manipulate these simple materials into highly personal visual statements. Some choose a narrative approach with dense imagery and rich surface embroidery; others prefer a more lyrical composition with elegant symmetrical shapes. Their works brim with images and patterns found in nature, with memories of a nomadic life lived in tents and igloos, and a spiritual landscape of Inuit myths and legends. 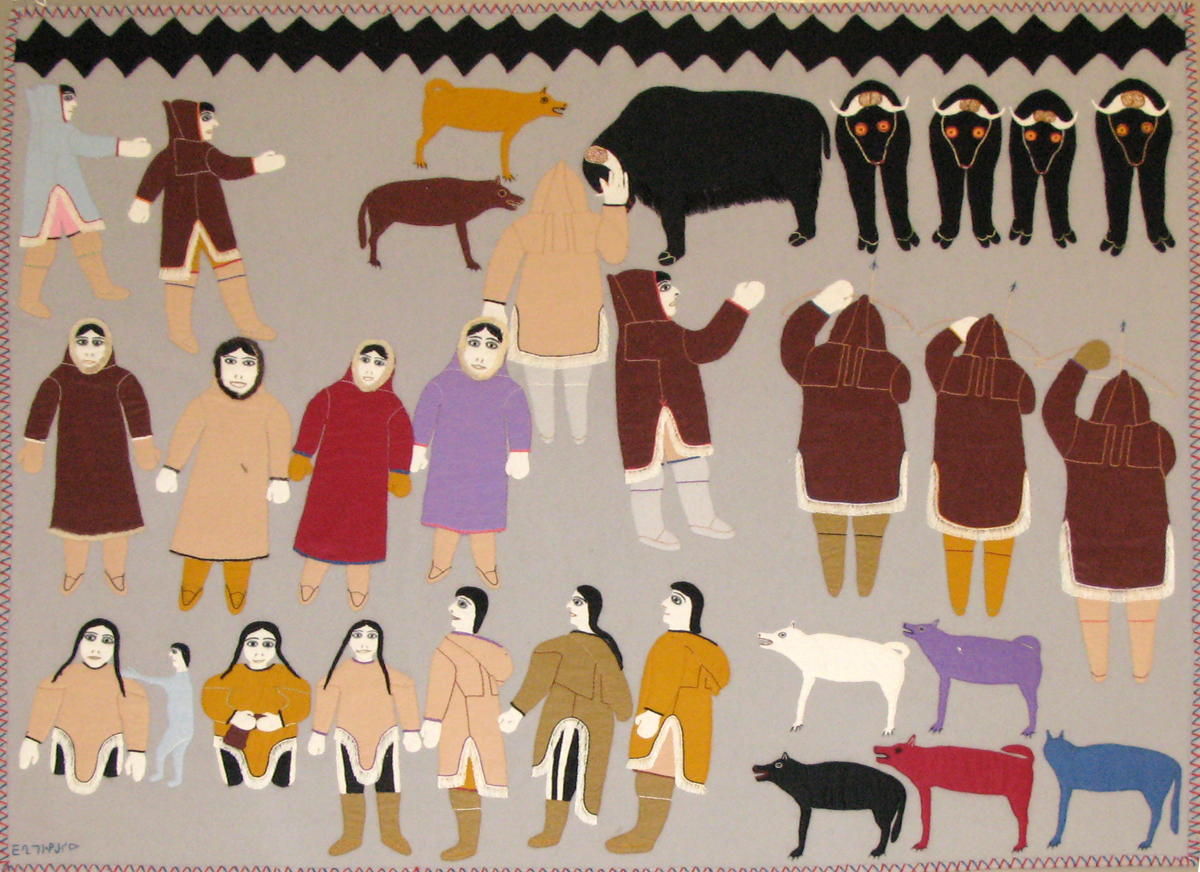 Our decision to collect works on cloth by the Inuit women artists of Baker Lake was initially more intuitive than strategic. Their tactile beauty and uniqueness not withstanding, these works expressed to us the best of Inuit traditions within a contemporary context. We came to appreciate the skillful expressions of life experience and personality embodied in the individual artists’ work. These personal statements are what compelled us to collect not only for ourselves, but also for posterity.

To that end, we also photographed every work on cloth produced for Baker Lake Fine Arts. We recently donated these images and accompanying documentation including artist interviews and photographs, related exhibition brochures and events to the University of Manitoba Archives. Our hope is that this material will prompt scholarly research.

I have remained actively involved in the comings and goings of the Baker Lake arts community, curating exhibitions for the artists I have come to know well, following emerging artists’ careers, and arranging their numerous shopping trips to Walmart when in Winnipeg. Releasing select works from our collection to the broader public is bittersweet. 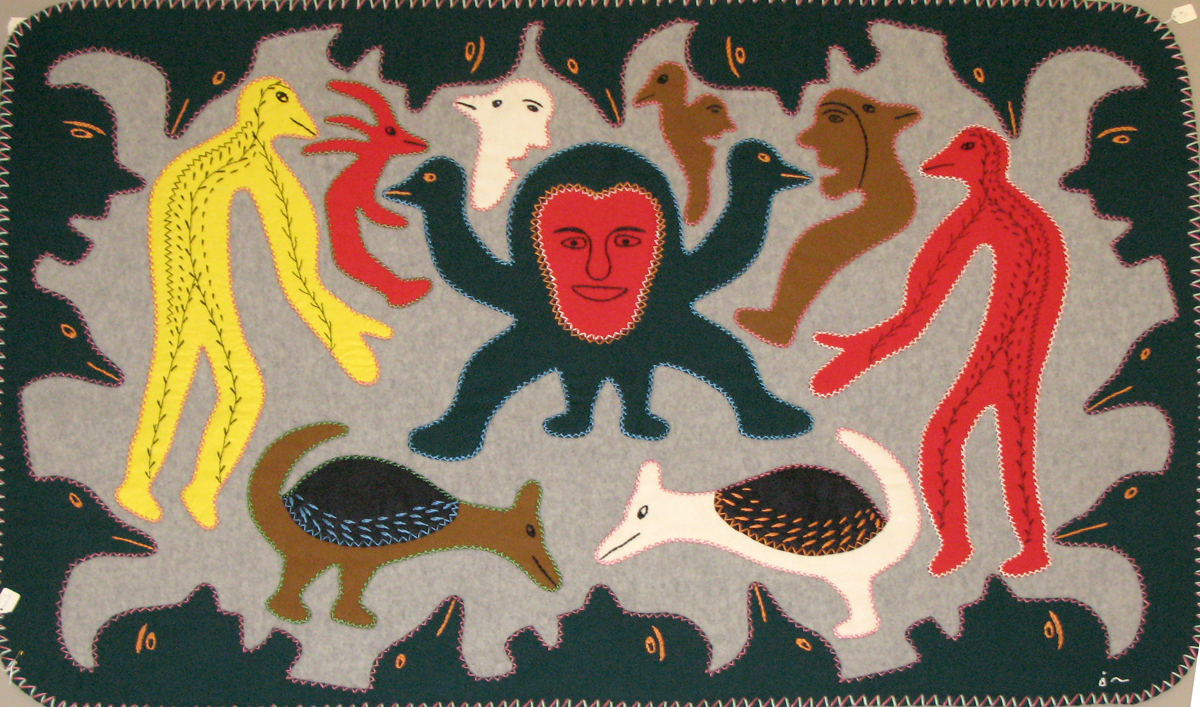 Elizabeth Angrnaqquaq  ( 1916-2003)
Angrnaqquaq was born in the Garry Lake area and lived off the land until moving to Baker Lake in the late 1950’s.  She was one of the first women to create felt and appliquéd images on cloth. Her work has been shown in three solo exhibitions and  numerous group exhibitions since 1976 . She is represented in the collections of the National Gallery of Canada, Canadian Museum of Civilization,  the Winnipeg Art Gallery, and the Dennos Museum Centre, Michigan, among others.

Martha Apsaq  (1930-1995)
Born in 1930 in the Back River area, Apsaq’s wall hangings have been exhibited in numerous group exhibitions including the 2005 international exhibition Patchwork Quilt Tushin, Yokohama, Japan. Her work appears in public collections such as the Macdonald Stewart Art Centre, Ontario.

Irene Avaalaaqiaq (Tiktaalaaq) (1941-   )
Born in 1941 in the Kazan River area, Avaalaaqiaq moved to Baker Lake in 1958, where she still lives. Her work, including wall hangings, prints and drawings, is represented in numerous collections, including the National Gallery of Canada, the Art Gallery of Ontario, and the Winnipeg Art Gallery among others. In 1979, one of her wall hangings was presented to the State of Minnesota by the Canadian Ambassador to the United States and now hangs in the State Legislature in Minneapolis.  She was awarded an honorary Doctorate of Laws by the University of Guelph Ontario in 1999.  She is also the subject of a monograph, Irene Avaalaaqiaq:Myth and Reality, Judith Nasby, McGill-Queens University Press, Montreal and Kingston, 2002. 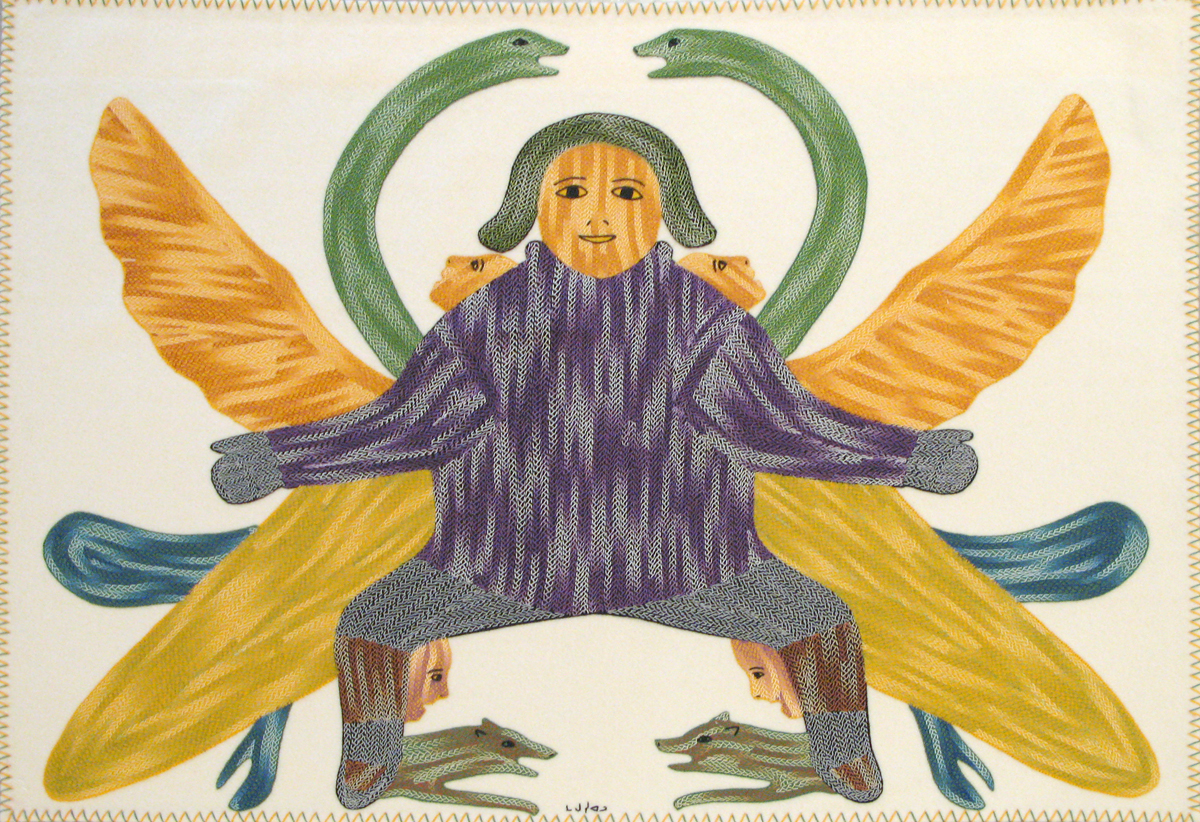 Naomi Ityi (1928-2003)
Ityi was born in the Back River area.  Her wall hangings have been exhibited in numerous group exhibitions both in Canada and in the United States and her work appears in public collections such as the National Gallery of Canada, Winnipeg Art Gallery and many others.

Janet Kigusiuq  (1928-2005)
Kigusiuq was born in the Back River/Garry Lake area in 1926.  She moved to Baker Lake with her mother, Jessie Oonark, in the early 1960’s. Her works have been featured in numerous group and solo exhibitions and she is represented in major collections including the National Gallery of Canada, Art Gallery of Ontario and the Winnipeg Art Gallery.

Myra Kukiiyaut (1929-2006)
Kukiiyaut was born in Baker Lake in 1929 and raised in a nearby camp. She moved into Baker Lake in 1956/7 where she became known primarily for her drawings and prints. Her works on cloth further explore her interest in the formal elements of art making.  Her work has been included in more than 50 exhibitions and she is represented in major American and Canadian museums.

Mary Mariq Kuutsiq (1926-2011)
Born in the Back River area, Kuutsiq has exhibited widely and her artwork is included in collections nationally and internationally, including the Smithsonian National Museum of the American Indian, Washington, D.C. 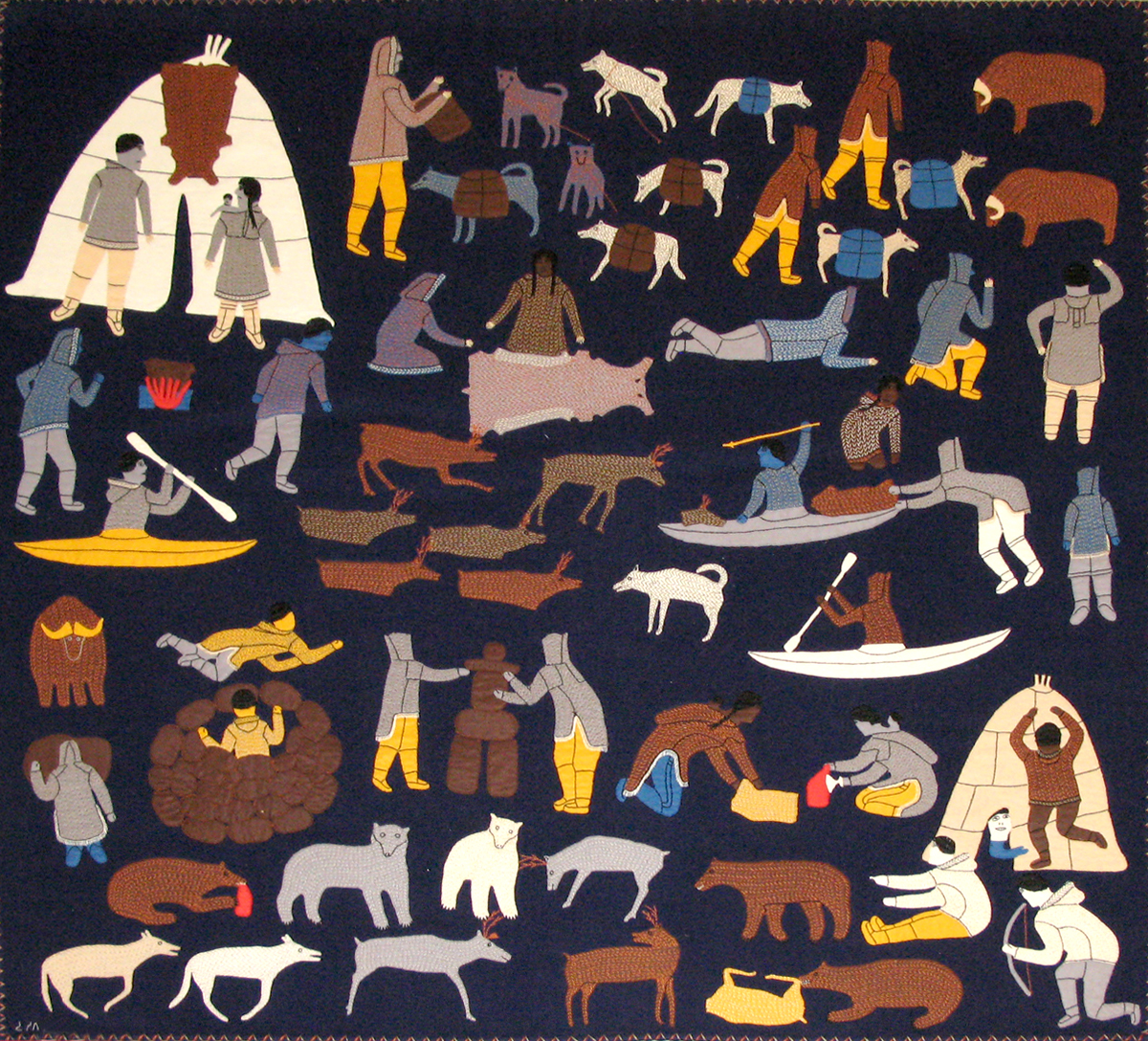 Victoria Mamnguqsualuk (1930-   )
Born in the Garry Lake area in 1930, Victoria Mamnguqsualuk is the daughter of Jessie Oonark. She moved to Baker Lake in 1963.  Known also for her prints and drawings, Manguqsualuk’s work has been exhibited in Canada, the Unites States, Greenland, Germany and Italy.  She is represented in major collections.

Mamnguqsualuk drawings were featured in a major exhibition in 1986/87 at the Ring House Gallery resulting in the publication of  Keeveeok Awake! !Mamnguqsualuk and the Rebirth of Legend at Baker Lake; Boreal Institute for Northern Studies, Edmonton, University of Alberta, 1986.

Miriam Marealik Qiyuk (1933-    )
Qiyuk was born in February 1933 in the Garry Lake area and moved to Baker Lake with her mother, Jessie Oonark, in the early 1960’s. Qiyuk has shown talent in various media and is also well known as a sculptor.  Her works have been featured in numerous exhibitions and she is represented in major gallery collections.

Nancy Sevoga Kangeryuaq (1936-   )
Kangeryuaq was born in the Kazan River area in 1936. Known also as a sculptor and printmaker, her work was first included in the Baker Lake Annual Print Collection in 1972.  Kangeryuaq’s work has been exhibited in Canada, the United States and England.

Mary Yuusipik Singaqti  (1936-   )
Singaqti was born in the spring of 1936 in Chantrey Inlet.   She moved to Baker Lake with her mother, Jessie Oonark, in the early 1960’s.  She is also well known for her sculpture. Excelling in both textile arts and sculpture, Singaqti’s work has been featured in numerous national exhibitions, as well as in the United States and Japan.

Winnie Tatya (1931-   )
Tatya was born west of the Garry Lake area in 1931 and moved to Baker Lake in the late 1960’s. Her textile art has been featured in many exhibitions since 1974, including the international touring show Northern Lights: Inuit Textile Art from the Canadian Arctic, organized by the Baltimore Museum of Art in 1995.

Marion Tuu’luq: (1910 – 2002)
Born in the Chantrey Inlet area in 1910, Tuu’luq eventually moved to Baker Lake when she married her second husband, Luke Angahudluq in 1961. A contemporary of Jessie Oonark, Tuu’Luq was a prolific artist, working in several media. Her drawings, prints, and wall hangings have been featured in numerous group exhibitions and are widely collected. Her wall hangings were the subject of a major exhibition and publication curated by Marie Bouchard for the National Gallery in 2002.