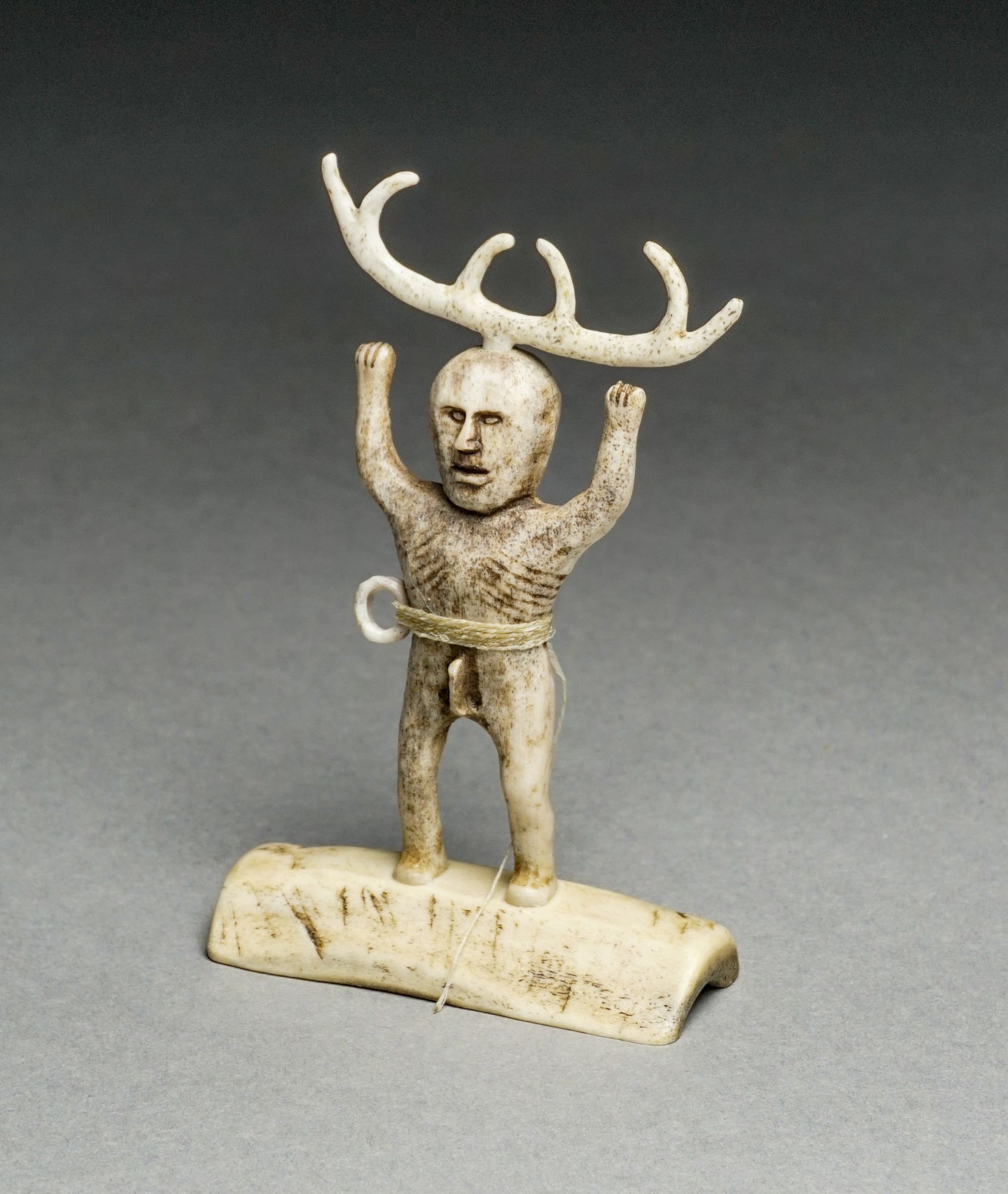 Feheley Fine Arts is pleased to present a compelling collection of small sculptures called Sikhirtya (little people) by Nenets artist Evgeniy Salinder. Like Inuit, Nenets are people of the circumpolar north (northwestern Siberia) known for excelling in harsh conditions. The sculptures, standing between two to four inches tall, represent the “little people” from Nenets cultural stories – small, supernatural beings who were also skilled blacksmiths, jewelers, fishers, and hunters. According to Nenets oral history, the Sikhirtya were real people who came to the Yamal Region thousands of years ago. When other cultures moved in, they took to caves and dugouts, only emerging at night or under fog. They had the incredible ability to control mammoth herds from under the earth.

Salinder’s Sikhirtya collection visually represents the abilities of these enigmatic people. Some figures are adorned with designs and shapes, emulating the Sikhirtya’s love of beautifying one’s self. Others hold in their hands various objects like fish, mugs, and rings, representative of their abilities as fishers, potters, and blacksmiths. Recently, archeologists have discovered sites in the northwestern Siberian region dating back 4000 years filled with metal pendants, tools, and pottery. Attributed an unidentified Indigenous culture, many believe them possible objects of the Sikhirtya.

Captivating little people figure in the lore of many Indigenous cultures around the globe. In the circumpolar north, parallels can be made between the Siberian Sikhirtya and the Inuit Inuralaat, mischievous little people of whom stories are passed down through oral culture. Like Sikhirtya, Inuralaat were derived from a real culture – the Thule people – smaller statured humans who lived in the Canadian Arctic thousands of years ago preceding Inuit.

Salinder’s Nenets culture, which came after the Sikhirtya, is naturally infused within his work. Each figure is carved from reindeer antler; the Nenets are known for herding the largest population of reindeer in the world across the tundra. Some eccentric figures even wear antlers of their own. Salinder’s figures celebrate and honour his own Nenet’s culture, while paying homage to their curious Sikhirtya predecessors.

Evgeniy Salinder (b. 1981) was born in Salekhard, a town located in the Yamalo-Nenets region of Siberia. In 1997, Salinder attended Lapzuya, Salekard’s school for culture and art, and subsequently the St. Petersburg State University of Technology and Design. He is currently based in his hometown of Salekhard where he continues to create and teach. Salinder’s work was exhibited at the National Gallery of Canada from 2019–2020 in the exhibition Àbadakone | Continuous Fire | Feu Continuel.