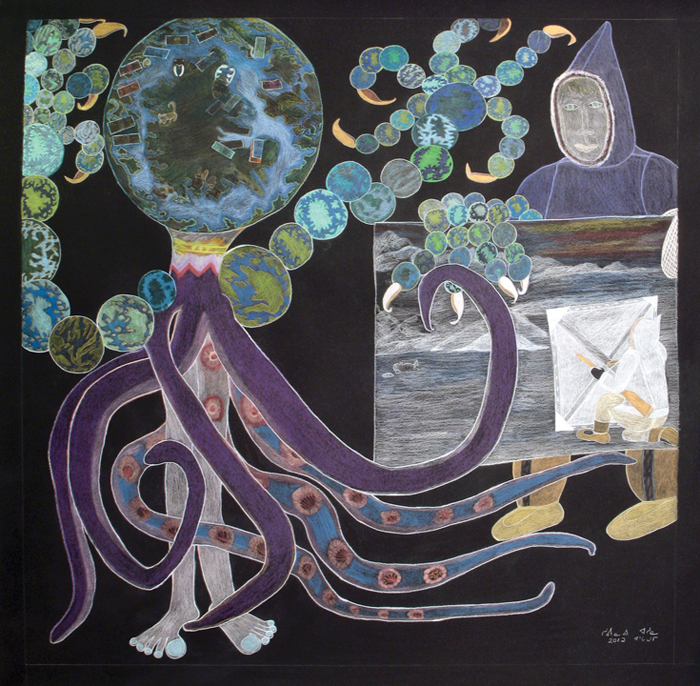 From her earliest works, the art of Shuvinai Ashoona has been informed by the influences of community, history and personal experience, and the spiritual connections made through memory, story and fantasy. Over time, the emerging field against which these influences played out has been the rock strewn shore of Cape Dorset, which for millennia has edged and interacted with its own parallel and elemental marine universe.

Incorporated onto pristine and extended white surfaces, favourite images such as tents have been connected by ink line and organized into precisely rendered coastal pebble and rock landscapes. This uniquely defined and visual economy created not only arrangements of objects in space, but let them float against their flattened and earthbound white surfaces. It is a subtle dynamic, and the resulting visual tension is also a barely concealed wish to break free and soar.

In 2007, Shuvinai collaborated with artist John Noestheden who at the time was working on his re-visioning of the night sky and referencing astronomy sources, some even art historically based. Noestheden allows that his work is not specifically about the universe but rather about representing the universe, and his amplifying and organizing the imaging of his sources has provided Shuvinai with a frame of reference that has re-adjusted her spiritual trajectory toward a new horizon of artistic development.

Shuvinai’s elemental tent image has now transitioned from a simple sheltered protection that is connected to the landscape through an architectural organization of physical supports, to a world – a world that even utilizes botanical and imagination-conceived tendrils to link to her other world(s) for compositional strength. In Shuvinai’s compositions however, her world(s) never collide – they touch, they eclipse, and sometimes they simply and elegantly float in perfect harmony with each other, but always in sensitivity to nature. Shuvinai’s tendrils surround her world(s) in such a way that the eye is led around the image by these connections. 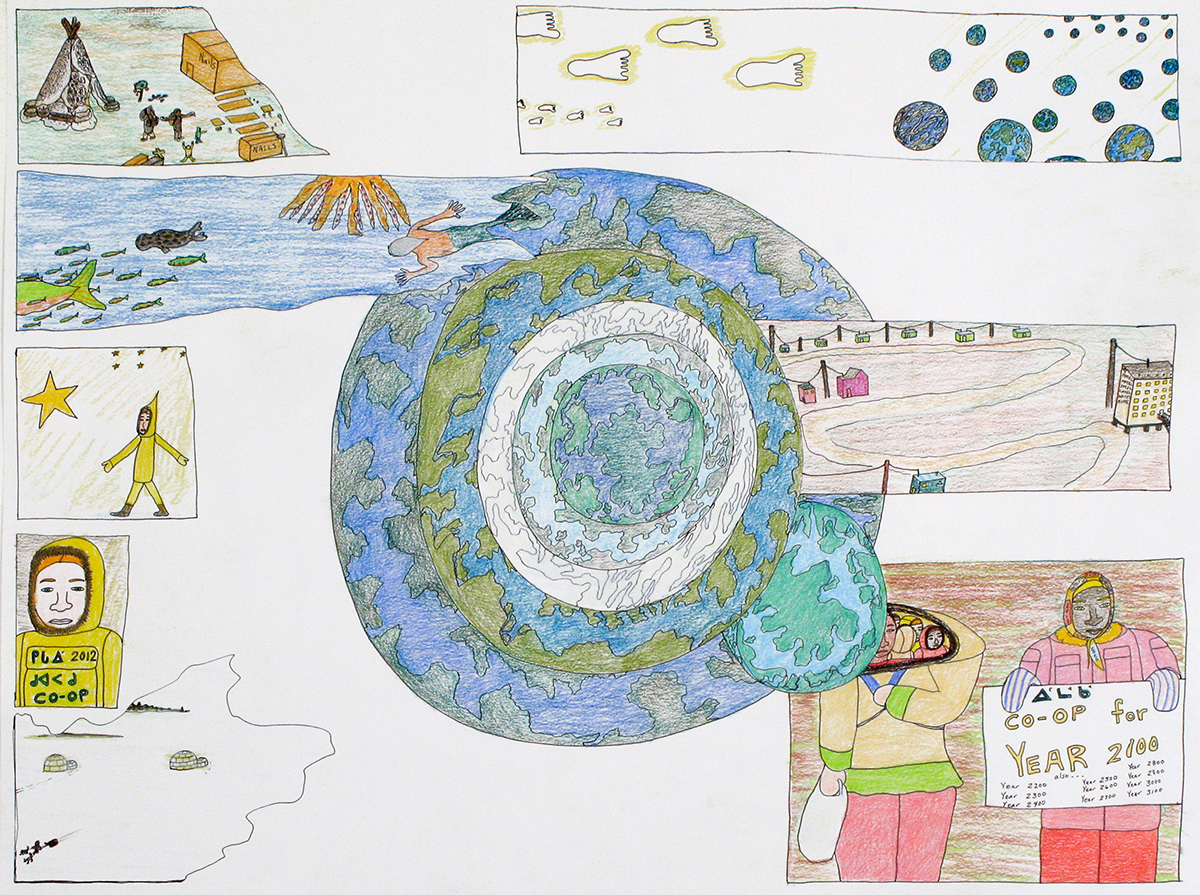 Sometimes, as in the natural world when a hunter might utilize it to keep something secured and within his control, Shuvinai uses harpoons to pierce her world(s) in an effort to keep them from floating away.

Shuvinai has an intuitive sense of compositional elements, and they always rest securely in nature. Her world(s) are a floating and colour-infused metaphor for the centre of family life that is positioned on an axis in space and held in place through a galactic network of anchors and supports extending from within the larger community.

Even a polar bear becomes a snake tendril in Shuvinai’s compositions. This transformational creation ties her world(s) together with encircling care while being ever vigilant of the floating stars.

One world has now become many for Shuvinai, and each represents the twin expanding universes of her external and internal creative explorations. The once flattened and extended white field against which the original precisely organized ink line renderings were grouped and distributed, has now been replaced by a sky; a sky that is spatially but carefully worked in colour and balance and extended out to the image edge, much like the horizon of heaven.