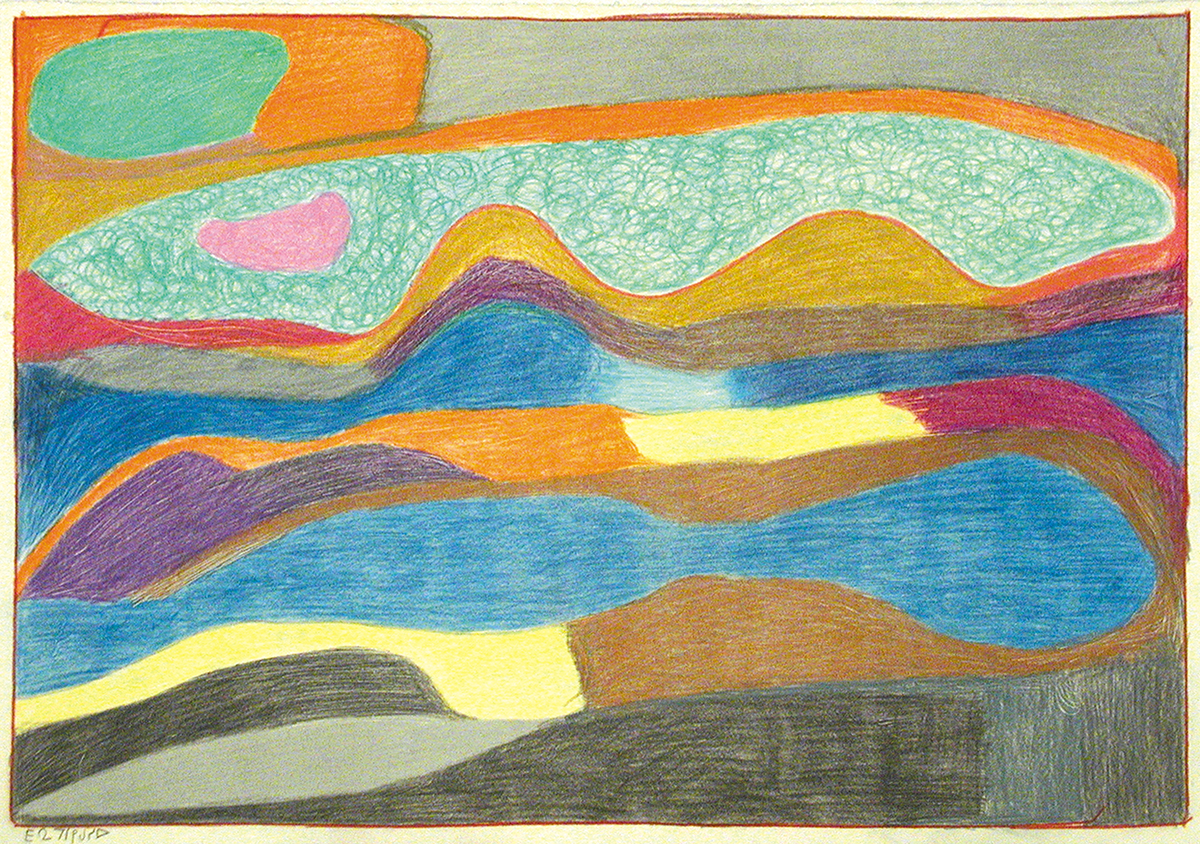 To behold these recent works on paper by Janet Kigusiuq is to be seduced by colour and delighted by form.

Kigusiuq was born in 1926 to Jessie Oonark, the first and  brightest  star in the Baker Lake firmament. Oonark taught her eldest daughter resilience and self-reliance during the difficult years on the Barren Lands through the 1940s and 1950s, and became the force driving Janet’s foray into art-making in the late 1960s. “When I started drawing,” Kigusiuq recalls, “it was on small paper and there were no coloured crayons, just black pencil. I wanted to quit, but my mother told me to keep going —  that the price would get better as I got better. She told me not to give up ‘’

Along with other second-generation Inuit artists, Kigusiuq’s  works exhibit  the influence of ‘western’ art conventions: recession in space is indicated by overlapping forms and subtle shading indicates volume. Yet time and place are casually compressed in tl drawings: consecutive scenes unfold within a single space, and hunter and prey at opposite ends of a vast landscape appear in equal scale, befitting their relative importance.

Hers is not a modern world; there is no hint here of the Baker  Lake settlement where she has lived for forty years, and no nod to modern arrivals such as ATVs, church spires or telephone  wires—though  these subjects found their way into her mother’s art and the work of her youngest brother, William Noah. In contrast, Kingusiuq’s Arctic is filled with dog teams and hand-sewn clothing. Her graphics sweep us along to a place always true. By emphasizing the best of times despite her own memories of famine, death and dislocation, Kingusiuq conjures an enduring sense of ‘plenty’ throughout her mythical land bathed in the light of paradise.

Janet Kingusiuq is one of few Inuit artists to return regularly to landscape–not just as background to a figure scene but as a worthy subject in its own right. Kingusiuq has developed her own syntax of colour and line to recreate the endless variety she recognizes on the tundra: oranges and ochres suggest sandy soils; flat greys recall cold bedrock; vibrant greens, purples and reds play out the lifespan of foliage on low-lying plants. These are bold and brilliant declarations of her abiding respect for nature and ongoing love affair with the land. 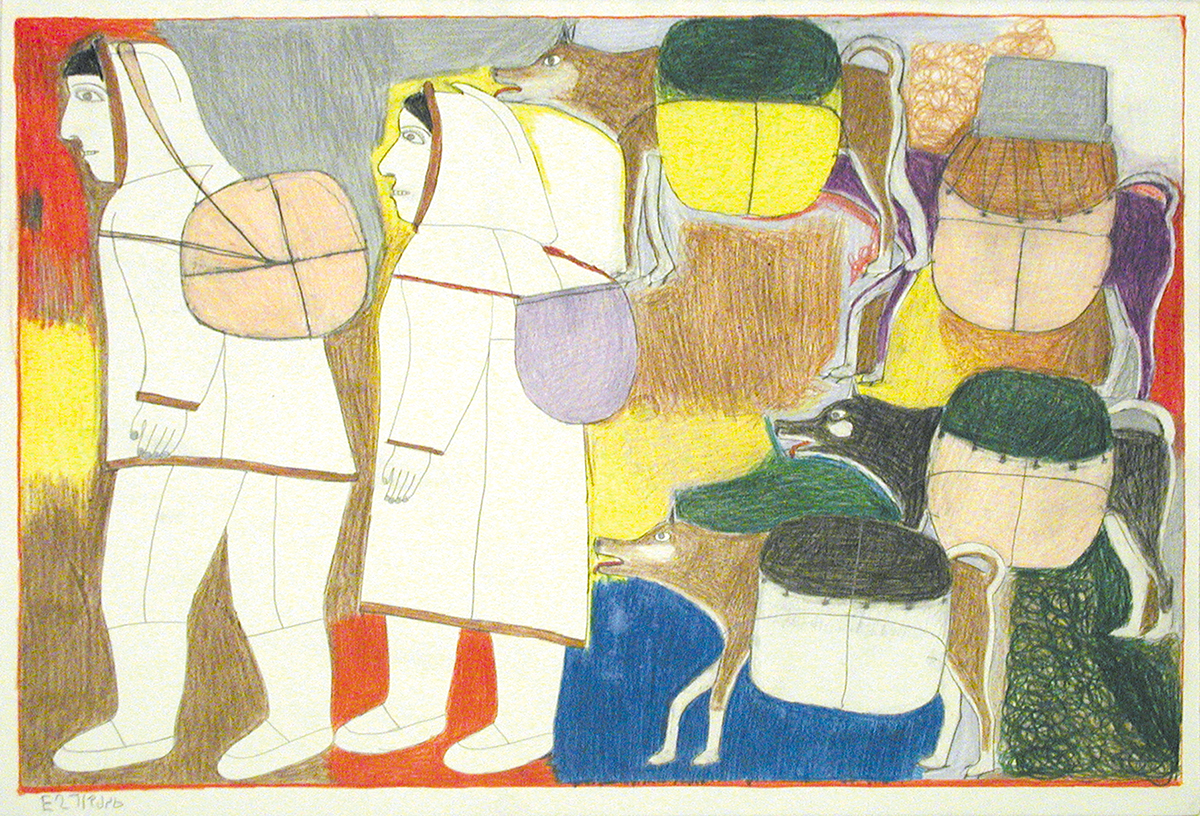 COUPLE TRAVELLING WITH PACK OF DOGS, 1999, coloured pencil, 22 x 30 in.
“They are trying to reach a spot they know where they will be able to stop. To carry everything to a new camp you would want six or eight dogs.”

Kingusiuq has worked in a variety of media over the years, creating drawings in graphite and coloured pencil as well as wall hangings and woodcut prints. The tissue paper collage works included here were a new adventure inspired by a series of art workshops in Baker Lake in the late 1990s. Janet discovered a latent affinity for this demanding medium, perfectly suited to her artistic tendencies. She appreciates the speed of collage, combining the broad colour fields of wall hangings with the more intimate scale of drawings on paper. In her collages, Nature emerges powerfully from confident abstract compositions created by layering torn and cut forms in translucent tissue.

These images of Arctic char drying on lines recall her past along the Back River. Of the drawing, she says, “The pink ones show the meat; they will dry on the rocks because there is no more room for them on the lines.” For the collage, she employed scissors and a template fish shape to cut multiples from folded tissue — a process reminiscent of making a chain of paper dolls. The translucent forms are built up layers applied rapidly to the white paper using an acrylic medium and a brush.

Kingusiuq works meticulously, marking a vibrant boundary around each new window on her world and covering the entire surface with energetic strokes of colour.

Janet Kingusiuq works naturally in layers – drawing the ‘meat’ of the muskox body before applying a top coat of fur; adding fish before layering on water above them; showing details inside and outside the tent simultaneously to impart all important aspects of the story at a glance; building up the colour of the land in cross-hatchings of tone and swirls of vegetation. “All these things are natural to her,” declared Fred Ford, Kingusiuq’s artistic champion in Baker Lake who rbings her Prismacolour pencils and fine artists’ paper to capture her vision.

In reviewing her drawings in preparation for this exhibition, Kingusiuq deftly manipulated the individual images like mosaic tiles, redistributing and combining elements into new narratives. Her comments wove back and forth through the works, pointing out where a pebbled shore reappears as a detail in a broader landscape, or joining two separate drawings made years apart into an impromptu diptych to reinforce her message.