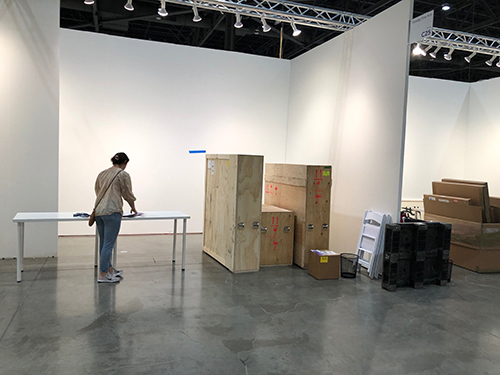 An art fair is a whirlwind, for visitor and exhibitor alike. Unpacking and building our booth and hanging the art is always a race against.

Once the booth is installed and the doors are open, it’s a real joy to make new connections. There’s nothing quite as satisfying as exposing the uninitiated to the depth of Canadian Inuit art.

It’s something of a revelation to watch people’s reaction to Inuit art. Of course, in Canada, Inuit art has established itself as a highly-recognized and integral part of our national cultural landscape.

Here in Seattle, even with their heightened awareness of local Indigenous art, the images from Canada’s arctic seems worlds away.

But as the dialogue grows between cultures, so does the appreciation of the art itself.

Our Pat Feheley and Elyse Jacobson in the Feheley booth.

Only in its fifth year, the Seattle Art Fair has quickly established itself as a mainstay on the art circuit, with big crowds of enthusiasts navigating their way around the impressive range of art on display.

This is truly a global fair, with galleries from as far away as Japan, Russia, Taiwan and Korea represented.

The fair began with something of a bittersweet champagne toast to its late founder, Paul Allen, since this was the first fair since his passing. Paul’s sister Jody gave an inspiring speech and warmly thanked and welcomed all the exhibitors and sponsors.

We look forward to making even more friends for Inuit art here in Seattle next year.

The Seattle Art Fair ran from August 1-4 at the CenturyLink Field Event Center.