Oscar Cahén and the Feheley connection

Feheley Fine Arts has a long legacy as an Inuit art gallery, beginning with Pat’s father M. F. (Budd) Feheley, a prominent graphic arts studio executive and ardent art collector. Budd’s legacy is often centered on his major contributions to what we now know as contemporary Inuit art – he aided in the formation of the TD Bank’s renowned Inuit Art Collection, served on the inaugural governmental advisory board for Inuit art (the “Eskimo Arts Council”), and built an exceptional private collection which was later donated to the National Gallery of Canada.  What is not known generally is that Budd owned a gallery that championed Canadian abstract art in the late 1950s and early 1960s. His personal collection of works by the artist collective Painters Eleven was eventually donated to the Robert McLaughlin Gallery in Oshawa—the city wherein the group originally formed in 1953.[1] 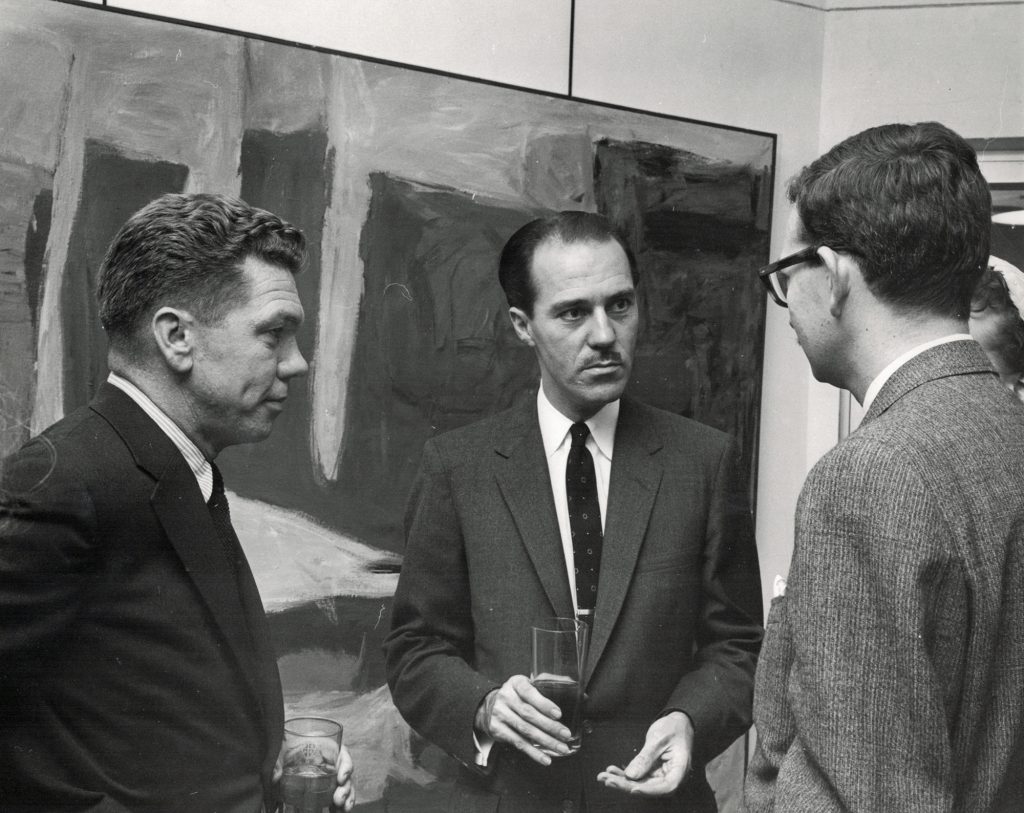 Budd Feheley with Paul Duval at the inaugural Painters Eleven exhibition at the Park Gallery, 1957. 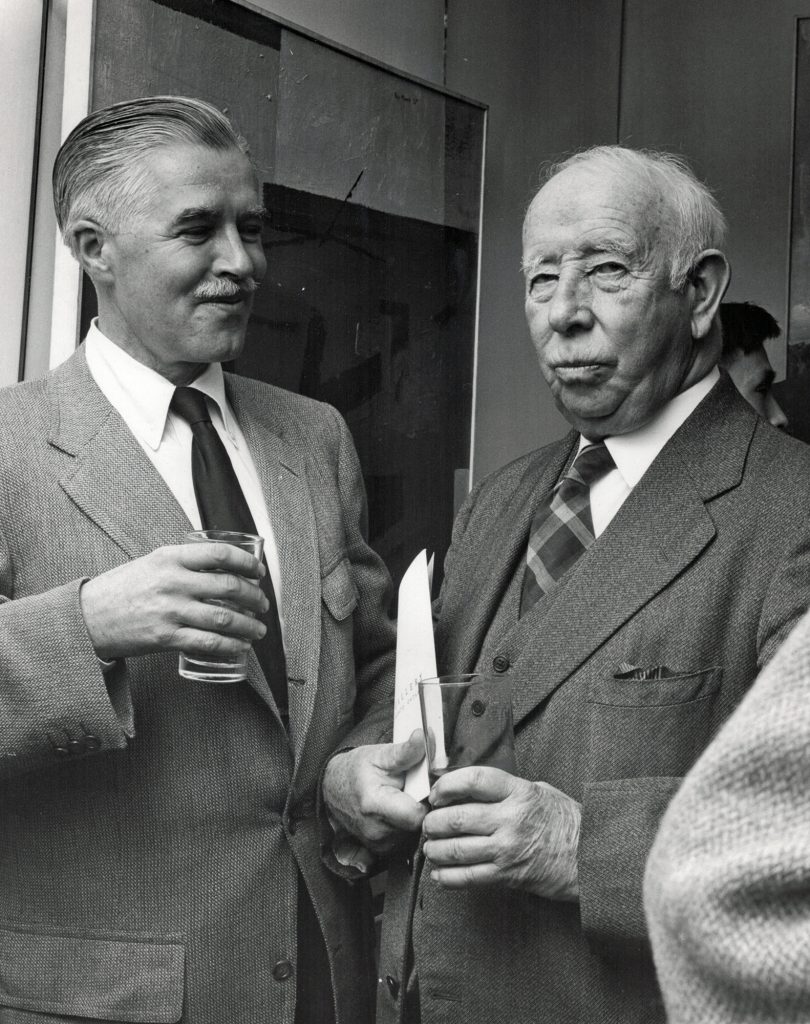 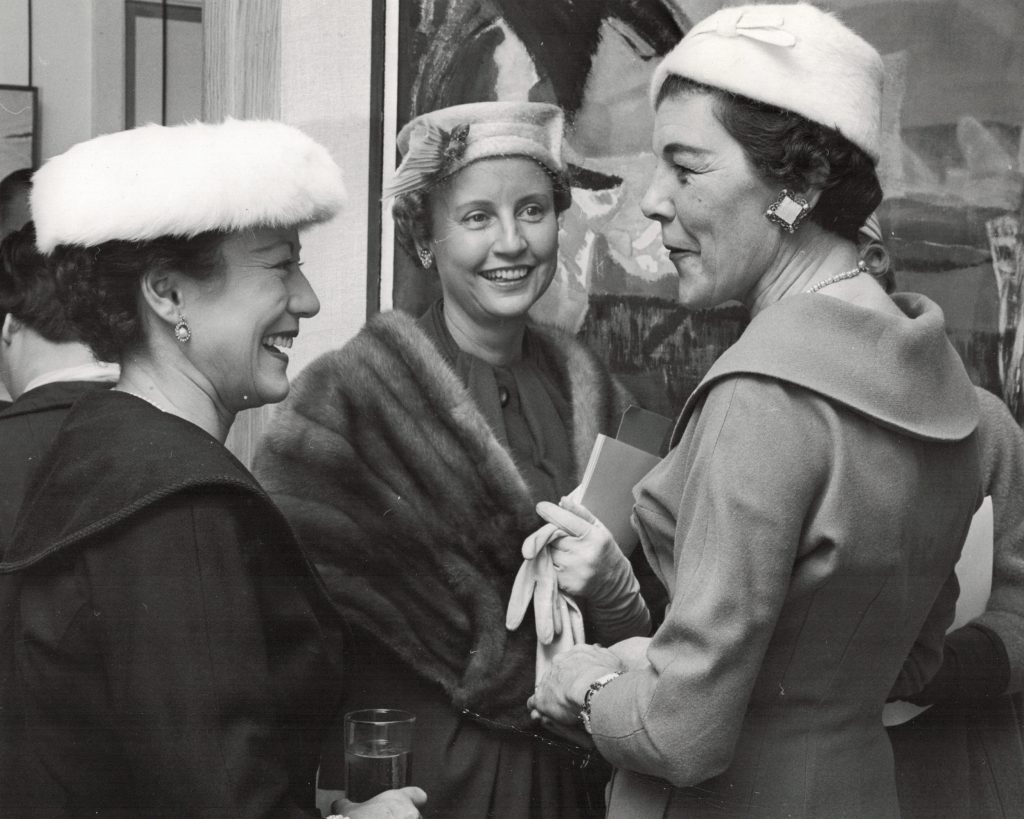 In 1957, Budd, one of the owners of Toronto’s then-largest advertising and design firm, opened the Park Gallery at Avenue Road and Bloor Street. He had hired a number of members of the group as illustrators over the years and was an enthusiastic supporter of their work. It was natural therefore, that he invited the Painters Eleven artists to show in the Park Gallery’s inaugural exhibition. [2] This was one of two exhibitions he would hold for the group before his gallery was expropriated for the new Toronto subway along Bloor.

Exhibited for the first time was Oscar Cahén’s magnificent major painting, The Warrior. In a touching photograph, the members who were able to attend the opening gathered for a special tribute to Cahén in front of this painting. He had tragically passed away months before in an automobile accident at the age of 40. It was a great loss to the group who revered Cahén as a leader, bringing with him an avant-garde European sensibility which came naturally to the German-born artist.

These photos capture the excitement and the beauty of this first exhibition. 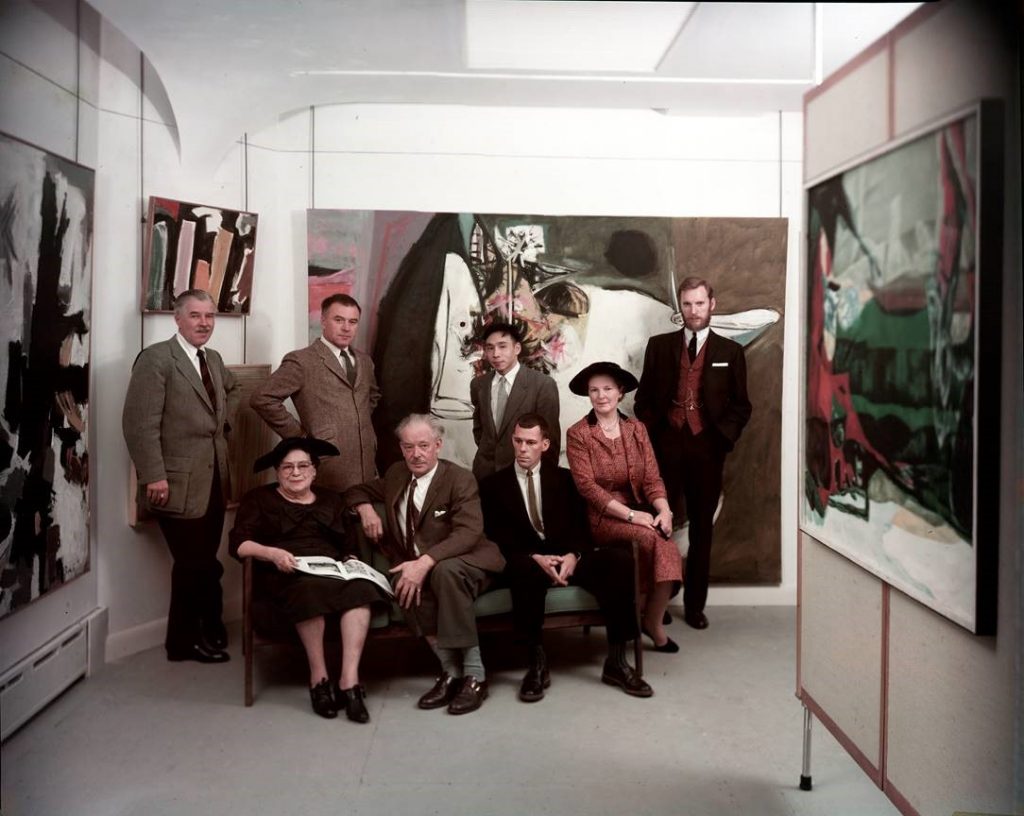 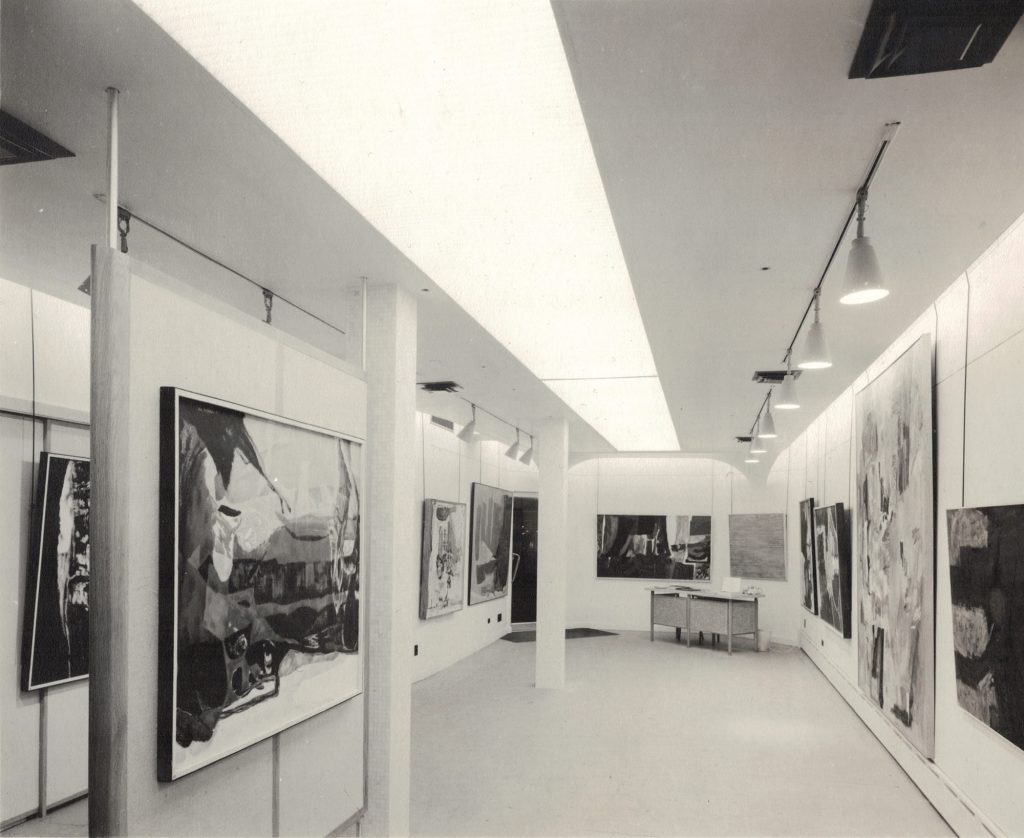 Installation view from the inaugural Painters Eleven exhibition at the Park Gallery, 1957. 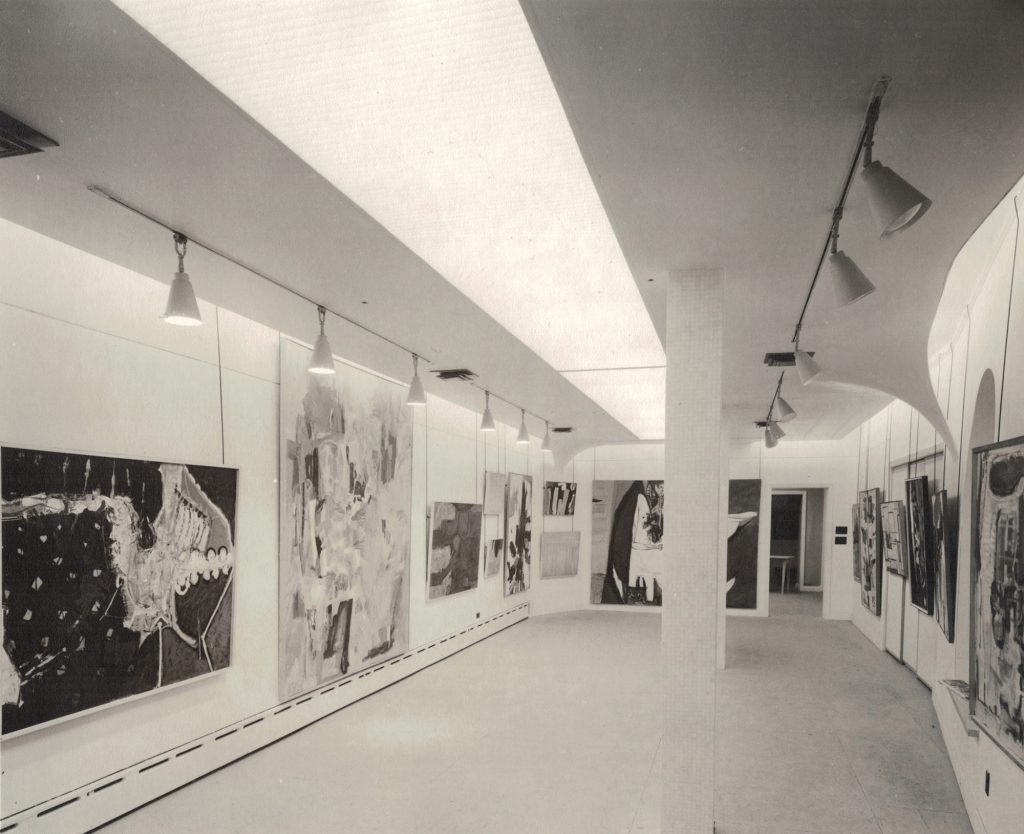 Installation view from the inaugural Painters Eleven exhibition at the Park Gallery, 1957.

In addition to collecting the work of Painters Eleven and championing their art, Budd had also worked with several members of the group through his advertising and design firm, TDF Artists Ltd. Ray Mead and Jack Bush, for example, worked as graphic artists to supplement their painting careers. Cahén himself was a highly sought-after illustrator, having won many prestigious design awards between 1950-55 including the Distinctive Merit Award, six times over.[3] Art writer Paul Duval, who frequented the Park Gallery during its active years, once noted that Cahén’s illustrations were “the wittiest and most sophisticated to ever appear in Canadian magazines.”[4] He had created a number of compelling cover designs and editorial spreads for leading magazines like Maclean’s, Magazine Digest, National Home Monthly, and The Standard Magazine, as well as illustrations for works of fiction and advertisement design.[5] It is likely that Cahén, like Mead and Bush, had done design work with TDF at some point. 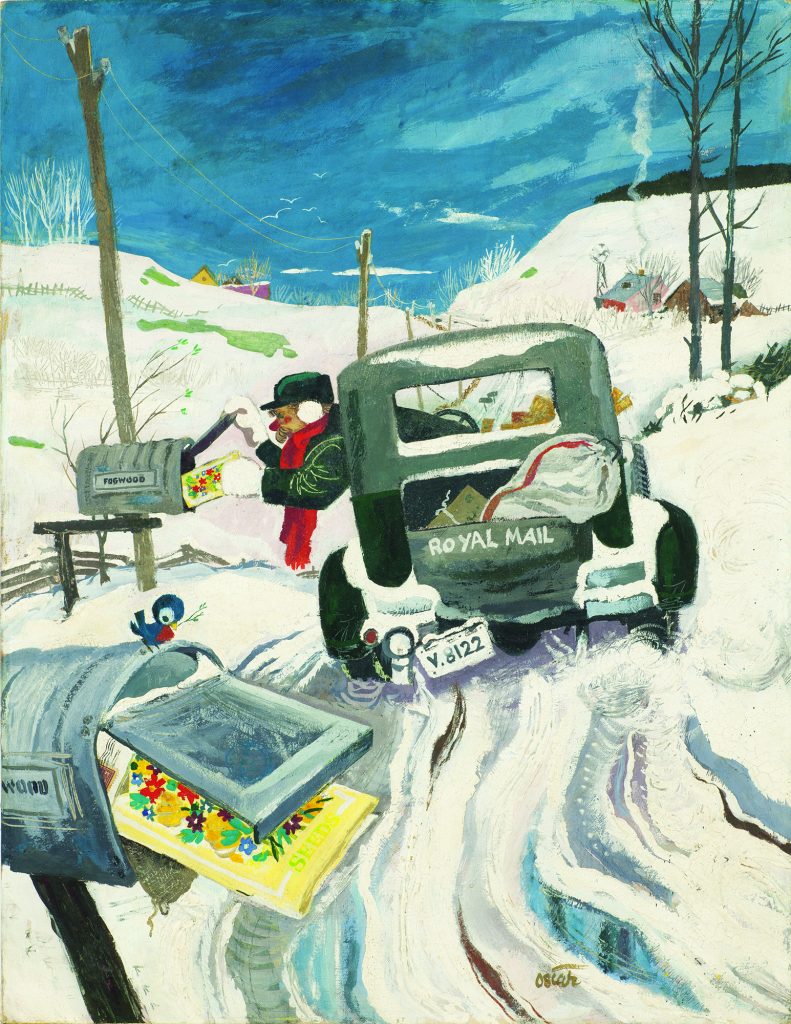 The inaugural Painters Eleven exhibition at the Park Gallery in 1957 was not only an event of immense glamour for the who’s who of Toronto’s artistic community. It was also the first time Cahén’s monumental canvas The Warrior had been exhibited in a commercial art gallery, mere months after his tragic passing. The Warrior was Cahén’s largest painting and also one of his last. It’s a piece that evokes ambivalence between figuration and abstraction, as remarked by Adam Welch.[6] It’s also a deeply personal piece, as investigated by Jaleen Grove, who positions the canvas as a return to Cahén’s earlier repertoire of images that explored suffering and the human condition through victims of war and warriors themselves. The artist observed these things himself during the eruption of the Second World War.[7]

In 1959 The Warrior was exhibited once more. It hung on the title wall of the Art Gallery of Toronto’s (now the Art Gallery of Ontario) Oscar Cahén Memorial Exhibition and after that, rarely saw the light of day for sixty years. Now, after six decades, The Warrior will come back in to public view at Feheley Fine Arts in Toronto—coming full circle since the 1957 Park Gallery exhibition where The Warrior was first displayed. A fitting and overdue tribute to one artist’s phenomenal life, art, and legacy. 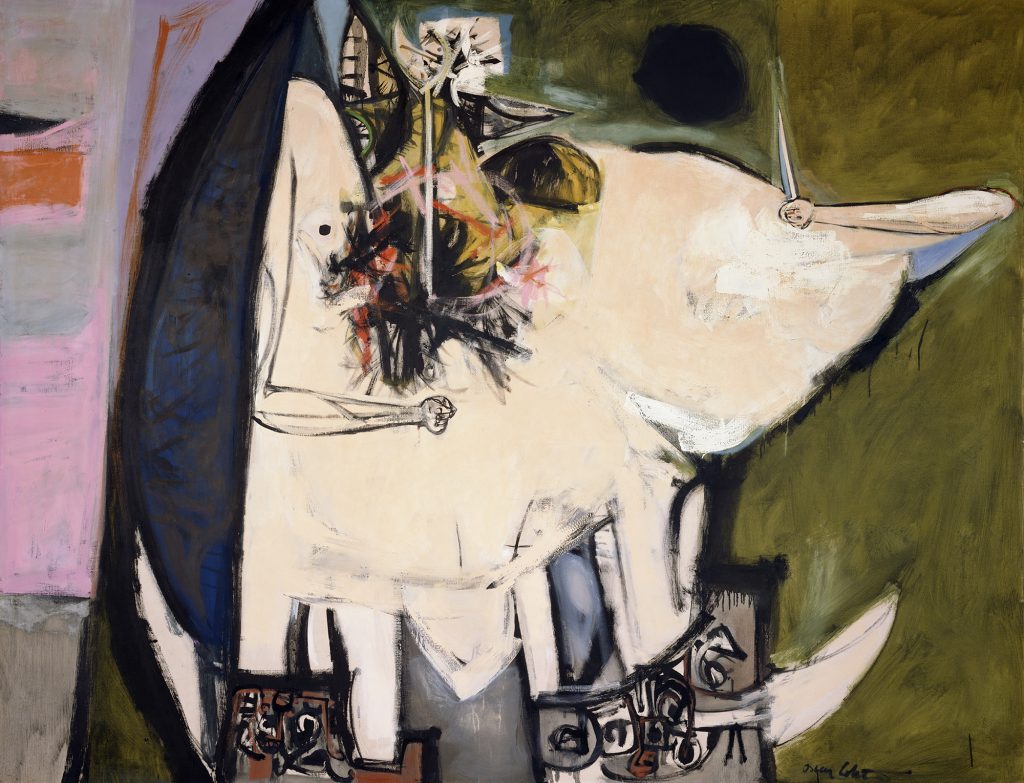