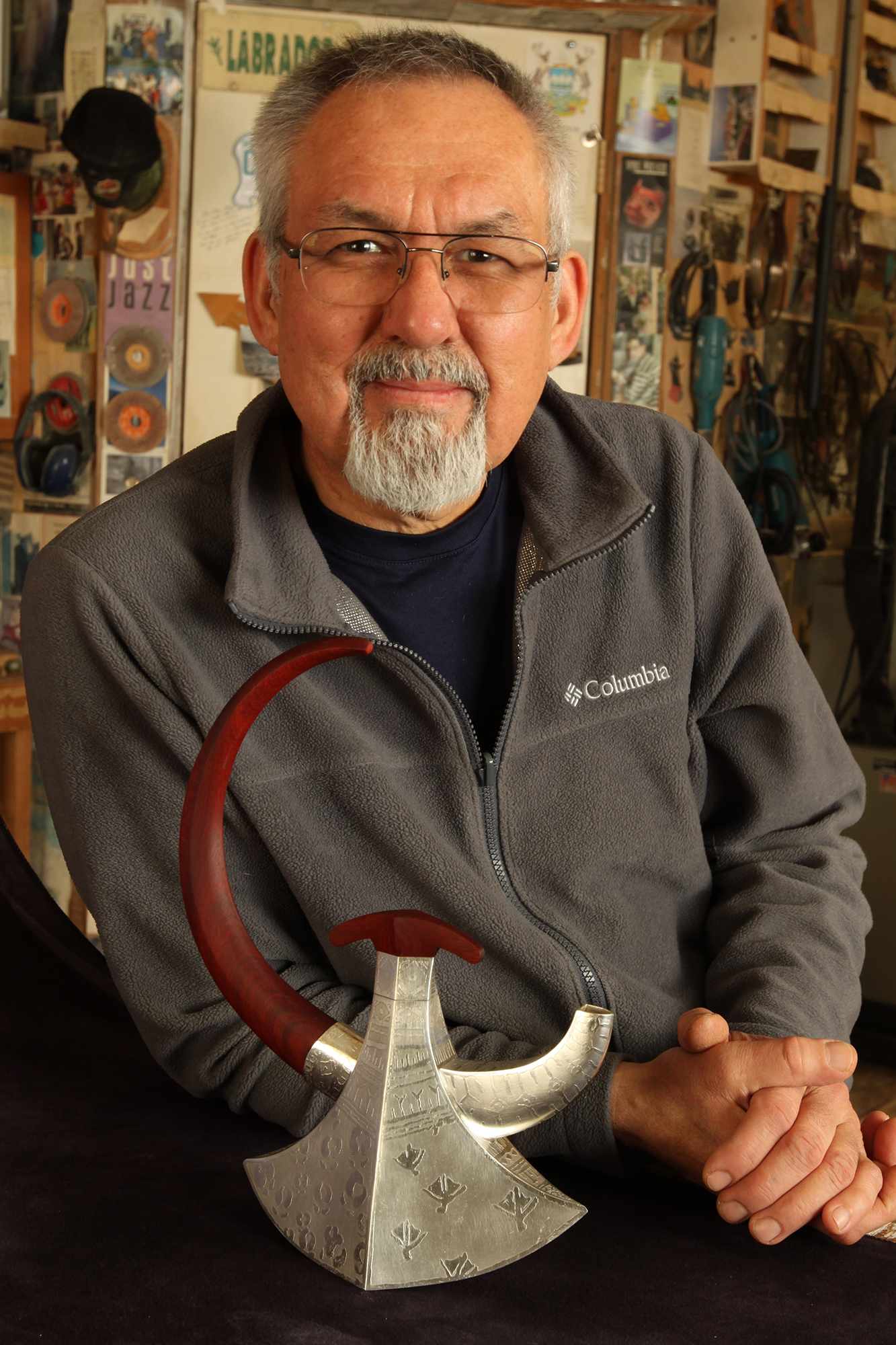 When you think of Michael Massie, you think of teapots. The Newfoundland-based artist has been creating them for nearly thirty years and in 2021 he made his 100th. Wittily called Identi-tea, a pun typical of Massie’s comical artwork titles, teapot #100 is an elegant silver masterpiece embellished with an elongated bloodwood handle and cap. The teapot’s body is etched with imagery from the artist’s Inuit (Nunatsiavut) heritage, including designs from women’s traditional tattoos on the spout and upper half of the teapot. The lower half is split in to four sections, each featuring the imagery from a particular arctic animal and its respective hunting season: ring seal for spring, salmon for summer, goose for fall, and caribou for winter. Like all of Massie’s teapots, the 100th is compositionally harmonious and thoughtfully conceived.

To celebrate Massie’s 100th teapot milestone, we chatted with the artist about his teapot history and the process behind these remarkable works.

When did you make your first teapot?

My first teapot was a class project when I was studying jewellery at the Nova Scotia College of Art and Design, back in 1989-91. We were given a project where we had to make a vessel, it could have been whatever we wanted to make and I chose to make a teapot.

The project came about a month and a half after my grandmother, May Baikie, passed away. I wasn’t able to make it home for her funeral and that was disappointing for me because we were very close. Growing up, myself and my cousins would always spend our summers down at their house in Northwest River. I remember whenever we walked into grandma and grandpa’s house, they always had two teapots on the stove, one was just water and the other was tea, steeping, sometimes all day long!

It was because of that memory of her that I decided to make a teapot for the class project. Once it was made I knew that I would make more, as making jewellery (earrings, brooches, pendants) were too tedious, small and repetitive. I was never into production, so I made the decision then that for every teapot I made, it would always be different than the last—no two would be the same.

Are the teapots functional or solely intended as art pieces?

Form and function were two things I learned when I was researching teapots. Sometimes the teapots are designed to be functional, to pour properly and to be held without feeling awkward in your hand. But not all of my teapots are made that way, sometimes it becomes more about the form than the functionality. I do however always try and make all of them pour properly. I also like to try and make them hold at least 1 1/2 to 2 1/2 cups of water—this size tends to look good visually and feels good while holding.

Have you noticed any changes in the way you approach teapots since your first one?

I think each one is its own experience. I haven’t really approached them any differently, the designs all come from what I can think of and what it means to me. I play around with shape, sometimes they are geometric in design and other times they are bowl-shaped. Style wise, I have been in stages with my designs. I’ve had times where I made a number of geometric shaped designs and the get tired of that only to move on to designs which were more organic, or odd shaped forms. I think it just depends on the thinking at the time.

What about material use?

The use of woods, dark woods, tend to help warm the silver since silver looks cold visually. I’ve used moose and caribou antler in some of the pieces, but they don’t warm the silver up as much, so, bone is added for a look and feel wood doesn’t give. I use bone when I am making teapots that represent birds, for the most part!

Is there something you always strive for in your work?

Movement. Whether it’s through line or actual movement (as in the 100th), is something I look for in the final design. In Identi-tea, Movement through the lines made in the way the spout leads into the handle and the handle comes back around to the spout. Lines in the curvature of the body and handle. All of these help each other out and tend to give the teapot movement through line(s).

Email interview conducted on May 5, 2021 between Michael Massie and Emily Lawrence. 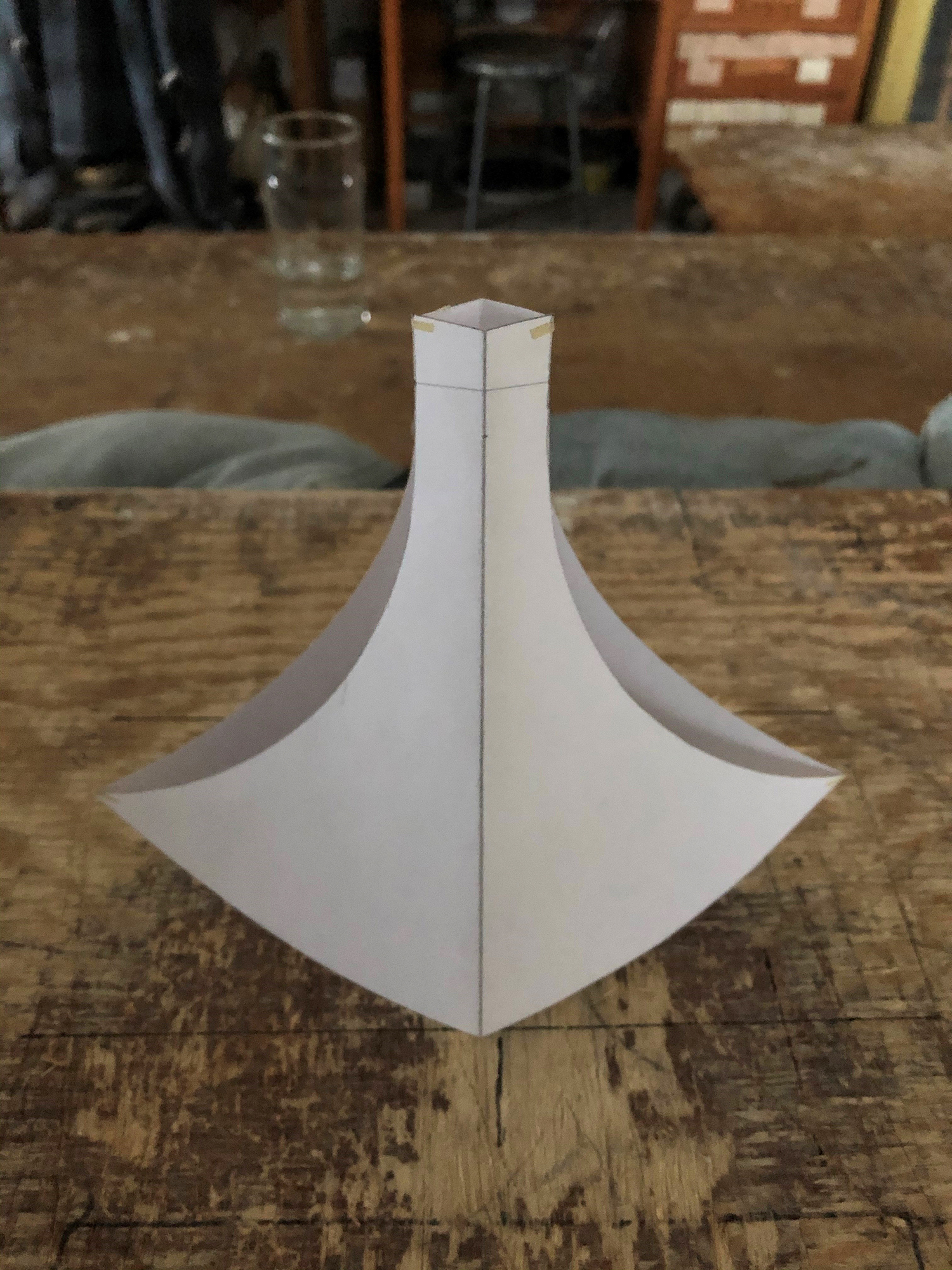 As a starting point, Massie uses a paper pattern to conceptualize the teapot’s shape. “It was by fluke that the pattern turned out the way it did, because if I didn’t fold the pattern before I cut it out, I wouldn’t have looked at it as a design possibility.” 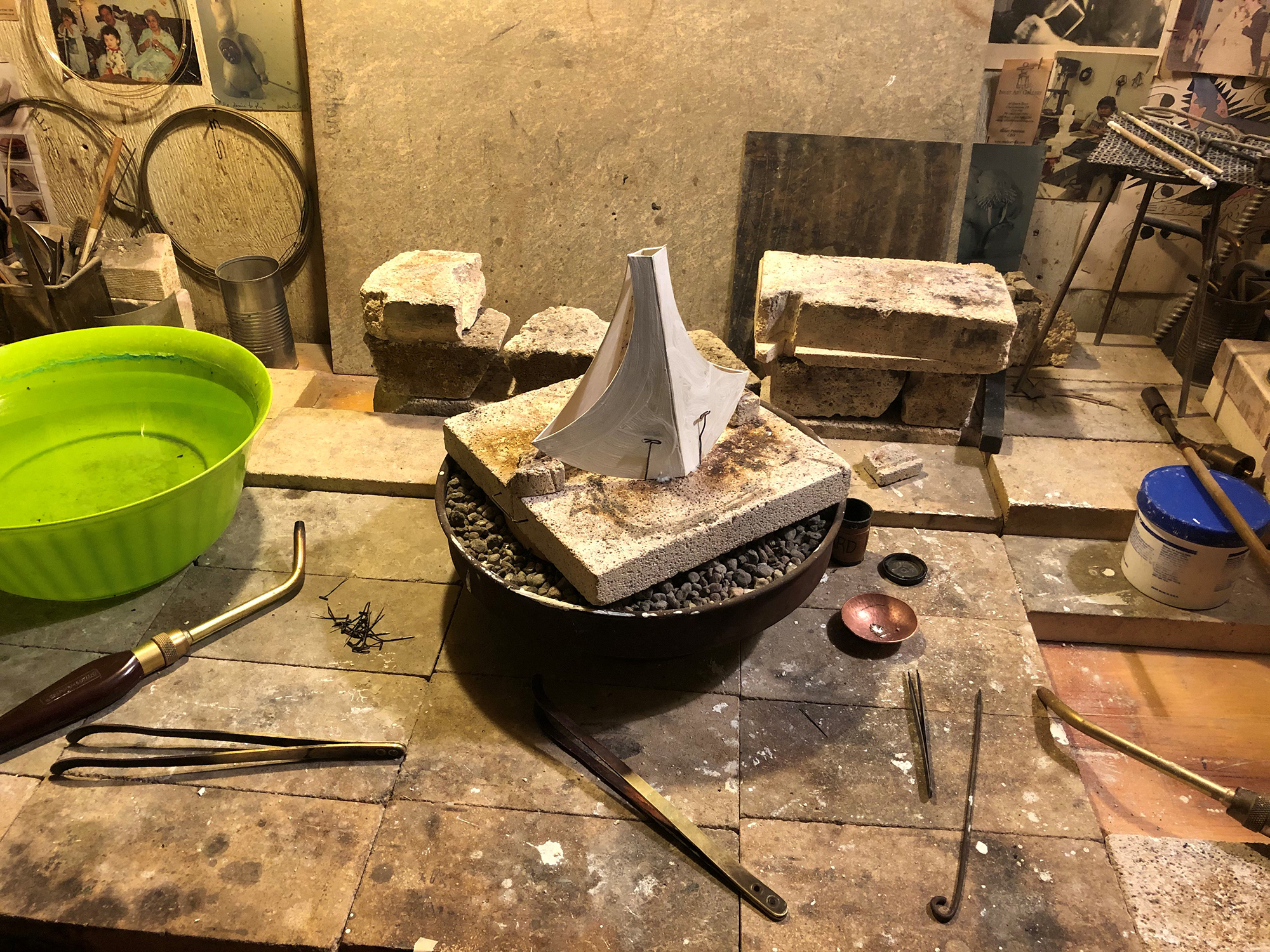 Massie then replicates the shapes in silver, cutting out four sides which are then soldered together at their points of contact. 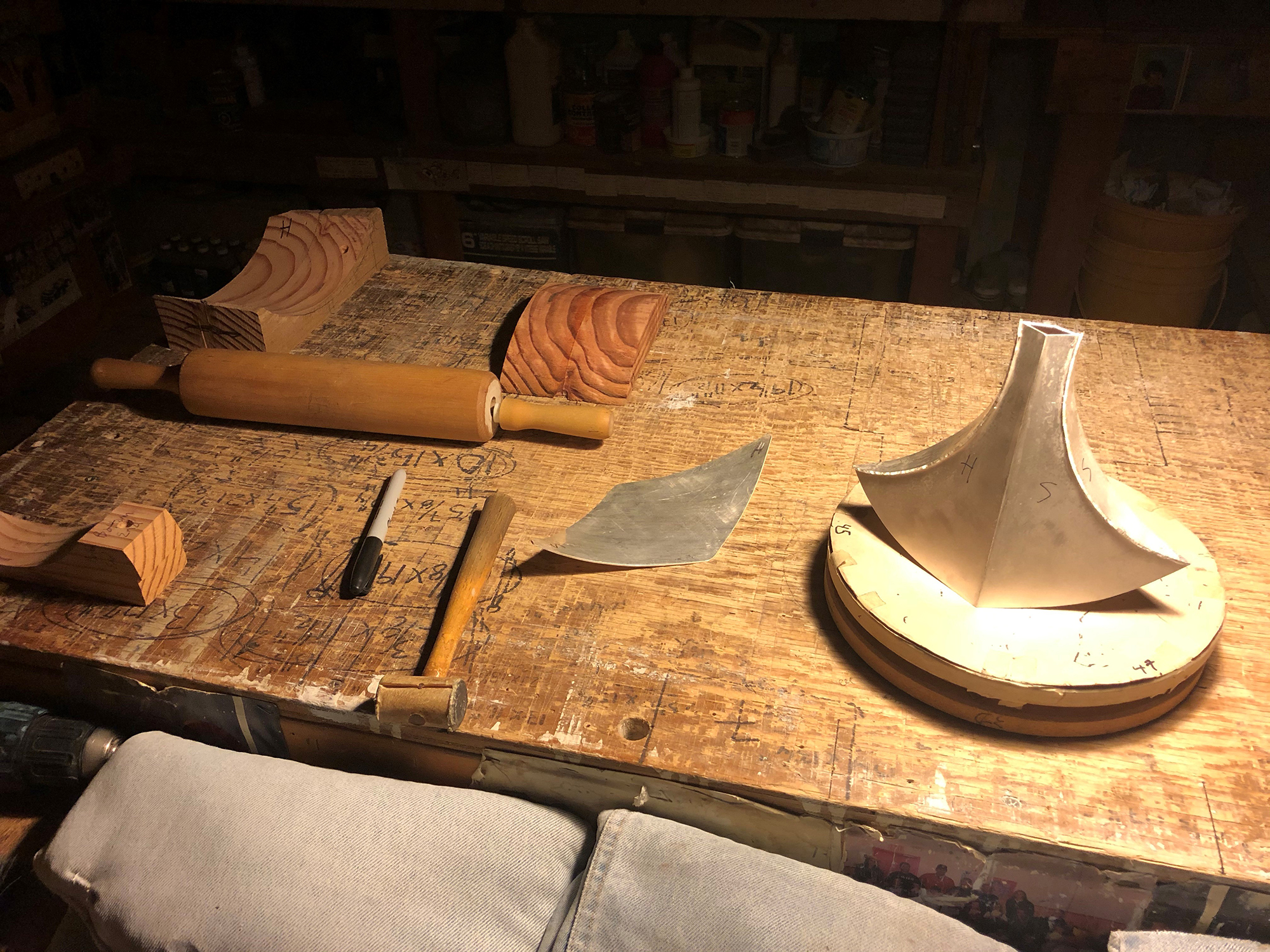 The handle design is then worked out on paper. “I spent a couple days going through ideas on paper before calling a friend of mine to help with ideas I had. It was decided to have the handle curve more toward the teapot. I was looking to have the piece rock back and forth. Having the handle closer to the body helped with the centre of gravity, allowing for a smoother rock.” 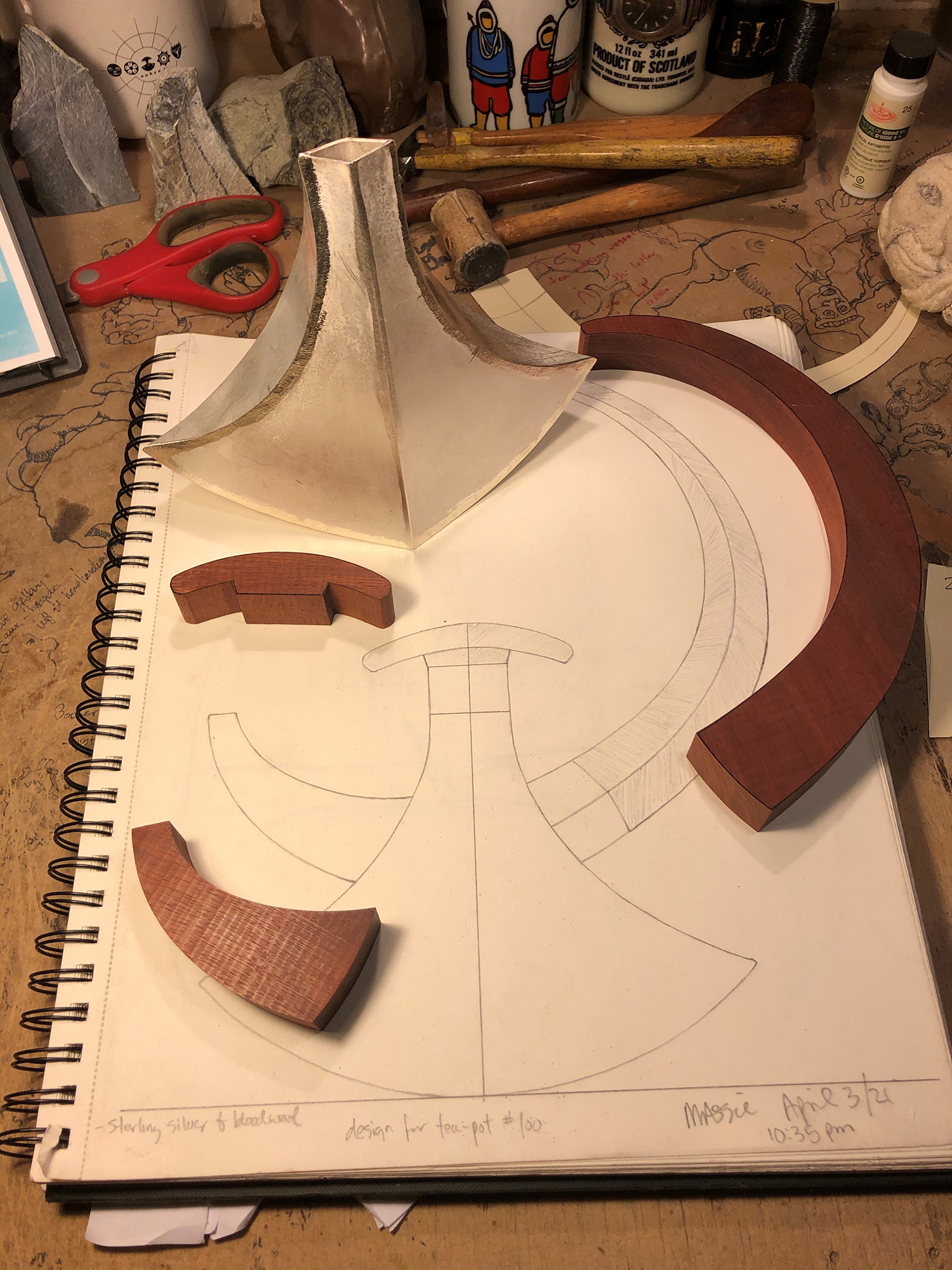 Next, the handle and lid are cut out of bloodwood and ready to shape, and the body of the teapot is cleaned up by removing the excess silver while soldering. “The drawing everything sits on here is the master drawing, used for the messaging and marking for fitting.” 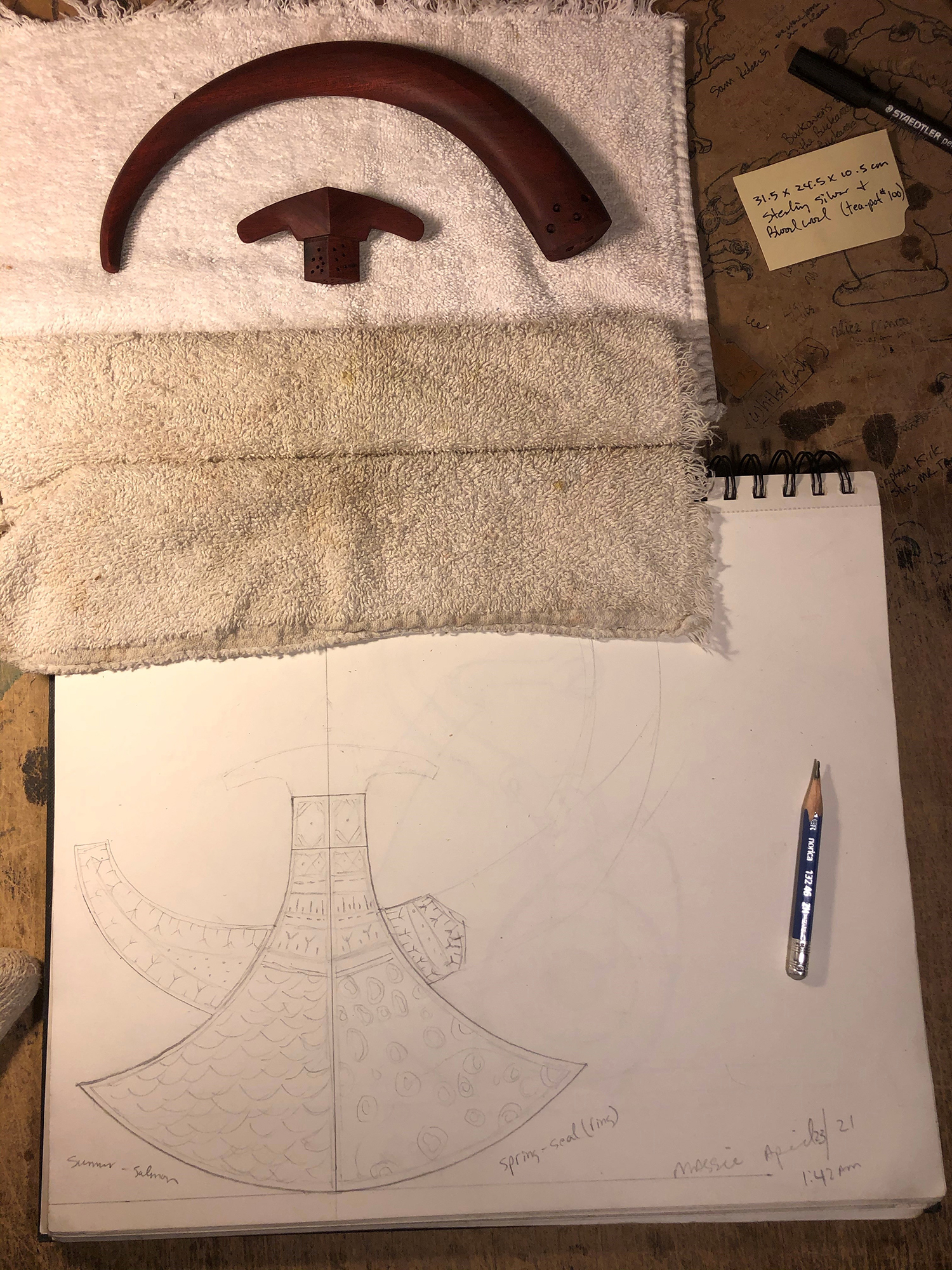 A quick sketch of the etched designs is made and Massie proceeds to etch all four sides according to the season and their respective animals. 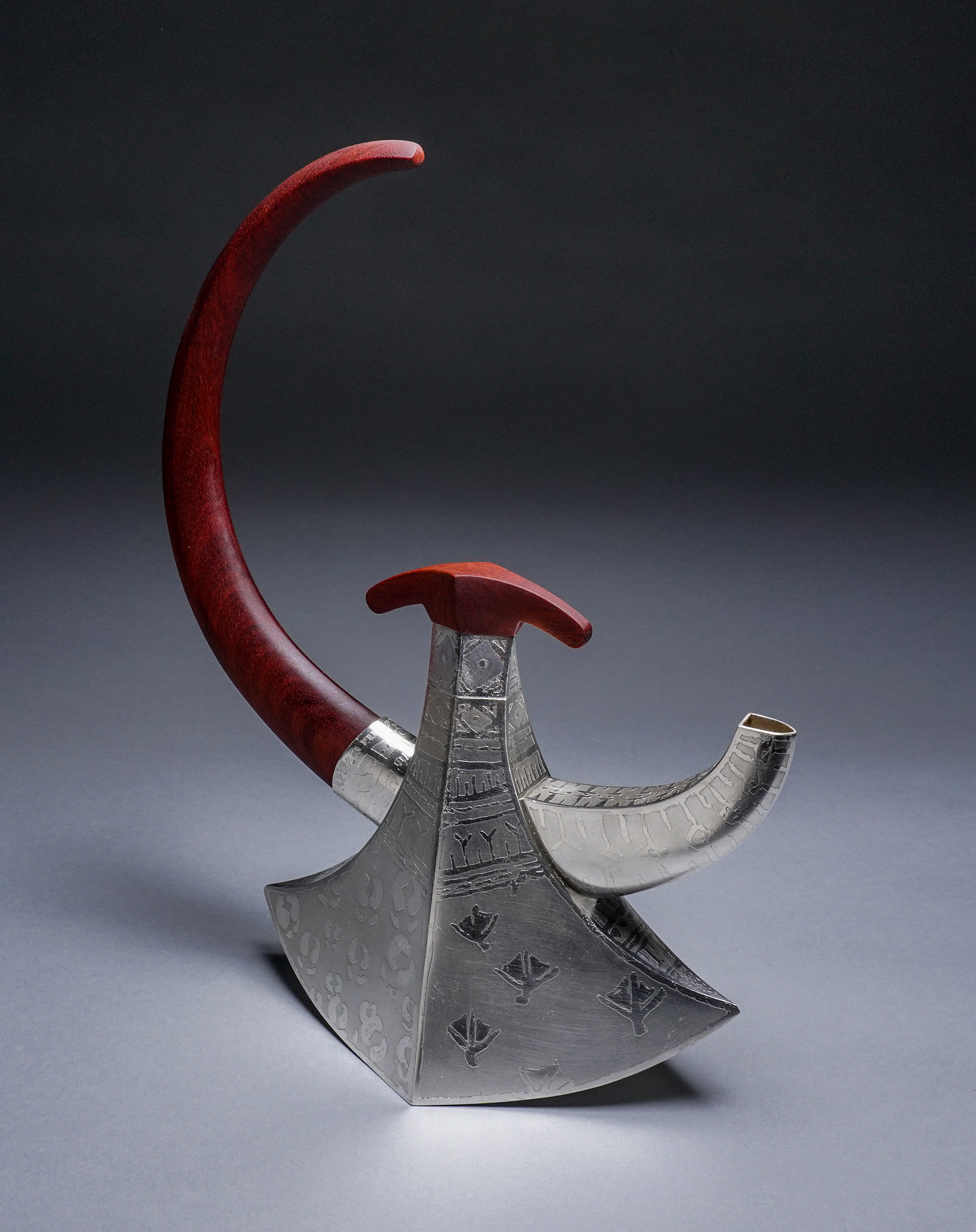