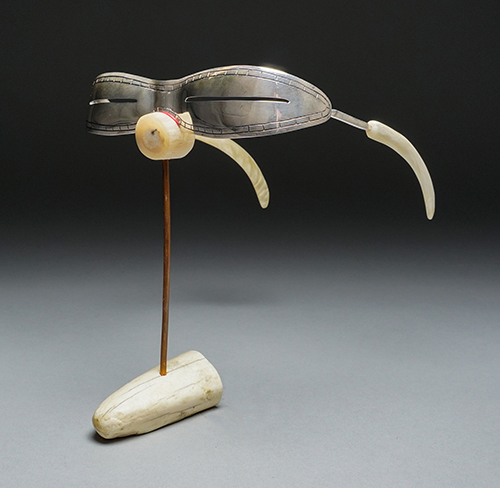 Mathew Nuqingaq is a drum dancer, performance artist, photographer, sculptor, jewelry maker and Member of the Order of Canada. He’s principally known for his wearable works of art that draw on traditional Inuit stories and symbols. Recently, a pair of his antler earrings made it onto the cover of Maclean’s magazine, worn by none other than former federal cabinet minister, Jane Philpott.

And now, he’s returning to Feheley for a new exhibition of stylized snow goggles. These are a riff on traditional Inuit snow goggles in which the eyes were completely covered except for a small horizontal slit on each side. These round silver goggles with horizontal slits have already been seen on the likes of Prince Charles and Camilla. Now you can wear a pair of your own.

We always look forward to seeing what’s next from Mathew Nuqingaq. He’s a fixture in the Inuit culture scene. He runs his Aayuraa Studio in Iqaluit, where he not only produces his own work, but also provides facilities for other artists.

Mathew continues to be a great champion for Inuit culture, as the co-founder of the Nunavut Arts and Crafts Association and as the current President of the Inuit Art Foundation.

Never willing to be pigeon-holed in one genre, Mathew is a tireless force of nature. His energy is contagious. So is his creativity.

Get your own look at Mathew’s latest creations in Masquerade, our exhibition, opening June 13.