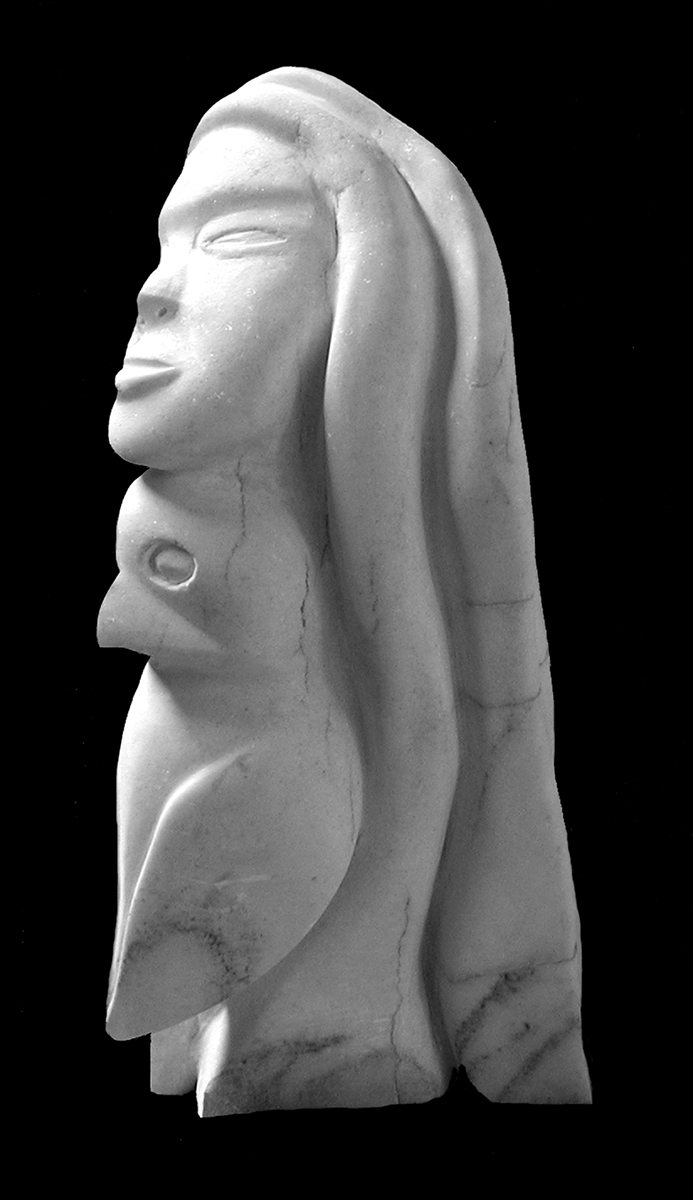 “These are all about history – what has been going on. They are memories; the whole truth about all of life for those who forget about their history; to make sure that the young people know what really happened; to work both sides, from the past to the future; to communicate with people in the South because I can’t speak English. I am proud of that lifestyle – my Inuit life.”

Mayureak Ashoona’s respect for traditional culture and her love of the Arctic environment echo through her artwork. Whether the material she chooses is stone or paper, she approaches the process with the patience, determination and precision that have served her well in her northern life.

Mayureak was born in 1946 on Baffin Island, the daughter of Aggeak Petaulassie and Sheouak, the well-known print artist. In the early 1960s Mayureak married Qaqaq, the son of Pitseolak Ashoona. Qaqaq and Mayureak lived in the Dorset settlement for several years before returning in the mid-1970s to the outpost camp near Shatureetuk where Mayureak had been born. Over the following two decades their growing family maintained, as much as possible, a traditional Inuit lifestyle on the land. Mayureak prepared skins, sewed clothes for the stored meat and made traditional toys for the children. Of all her camp tasks, she has said that drawing takes the most time because first she must think of a subject. She began drawing the carry l960s and started carving not long after, although family responsibilities often precluded time for art-making.

After Qaqaq’s death in 1996, Mayureak realized it was her job to provide for the family and began devoting increasing time to drawing and sculpting. The bands on the sleeve of an amautik, the markings of loons’ feathers and the endless, repetitive features of the tundra become patterns of minute detail rolling through her drawings. With the economy of a traditional seamstress, even negative space finds use as her hand inscribes the lines of transforming animals. She approaches carving with equal practicality: stone is a tactile but fragile medium which therefore requires less narrative content but more virtuosity in handling and finishing. Mayureak finds beauty in the ordinary and is unafraid of hard work, whether in her life or her art. Her face bears the marks of her full and challenging years, yet her optimism is immeasurable. Her religion, no officially Christian, is underscored by deeply traditional Inuit spirituality reflecting a fundamental integration with the land.

Previously overshadowed by the personality and artistic success of her husband, Mayureak’s individual style has strengthened immeasurably in the past five years and her artistic development continues at a lively pace. These days she proudly describes a January trip to the Gordon Bay quarry which she organized to find large pieces of her favourite hard white stone. This new sense of freedom is also obvious in her colourful and confident oil stick paintings of recent years.

This is the first solo exhibition of artwork by Mayureak Ashoona, including sculpture, drawings, prints and oil stick paintings collected over the past few years.