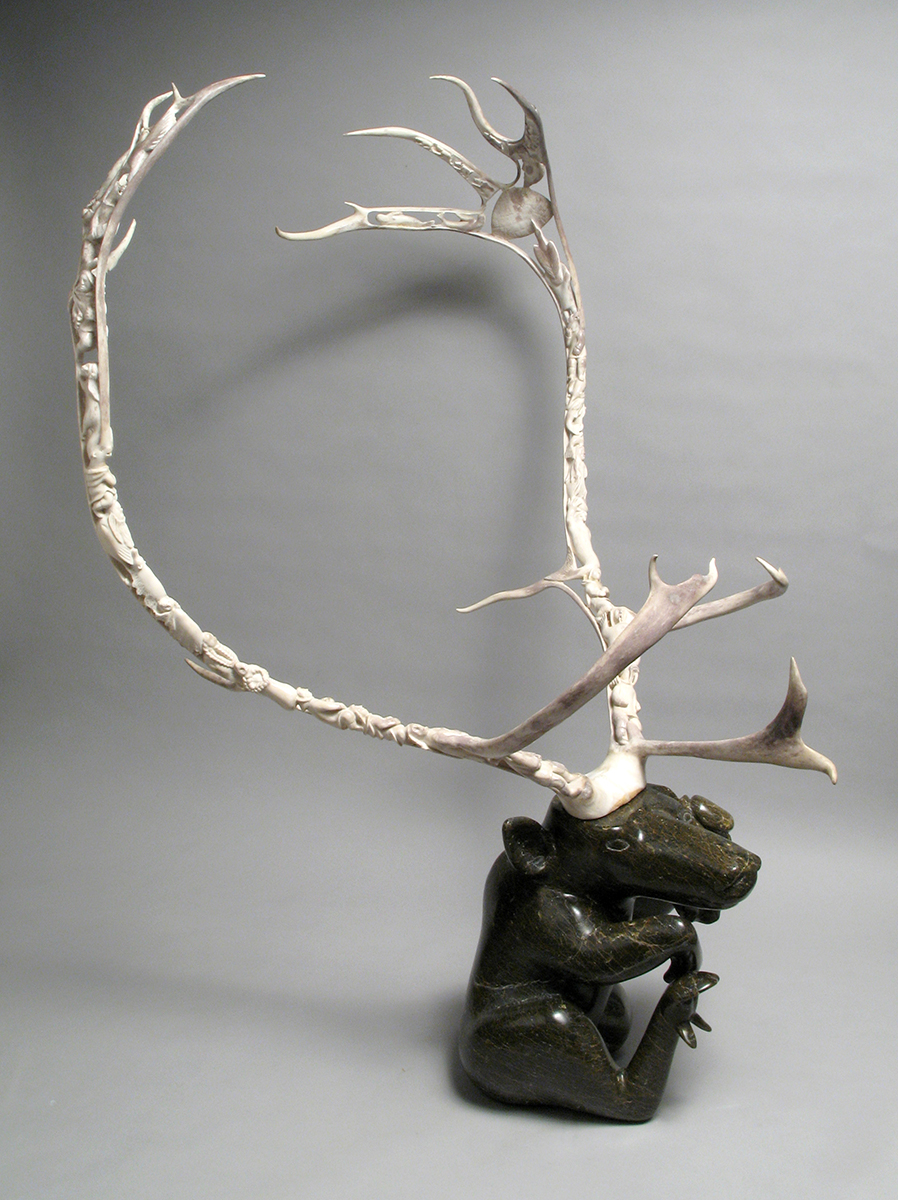 In the Arctic, an artist can never work entirely alone. The difficulty of finding materials and a space to work is not easy, but it is the private turmoil that is most trying. An artist like Jacoposie, who has endured deep suffering, both emotional and physical, but who harbours also a profound talent for storytelling has need of some assistance.

Thomas and Helen Webster of Arts Induvik Canada, who moved to Iqaluit in 1968 and have lived there since, have stepped into the role of facilitator/coordinator in developing the work of Jacoposie Oopakak. First meeting and working with Jacoposie’s father, Oopakaah, who did work in Iqaluit making artefacts for various projects in the area, the Webster’s later came to know his son, Jacoposie in the late 1970s. It was during this time that the government of the Northwest Territories instituted an economic program, which included the first jewellery-making workshop. Jacoposie attended the workshop and this is where their relationship began. Even in his early years, his small carvings in ivory and silver were exquisite – small and intricate, his was “very appealing work,” to Tom Webster.

Coming from a family that spent a lot of time in traditional camps around Iqaluit, Jacoposie has an “excellent knowledge and talent for depicting traditional ways”. Growing up in the camps with artists like Lipa Pitsiulak, one can see just how much influence the experiences of living on the land can have on an artist. With Jacoposie, it is the narrative of the scene that is most important. For Webster, because the influence of spirituality in Inuit tradition was paramount, so is the cultural element of storytelling. As such, Jacoposie becomes the storyteller of his experiences through his carvings.

Enduring recurring tuberculosis since a young age and now emphysema, Jacoposie has had a rather straining physical history. In the early-1990s, he suffered a terrible bout of tuberculosis which sent him to a hospital in Yellowknife for prolonged treatment. In addition, he has endured traumatic personal experiences. In the mid-1990s, Jacoposie’s wife died of an unusual form of cancer, followed within the year by his young son’s suicide. For Jacoposie, this was completely overwhelming. For several years he sunk into a deep depression. He was aided by a few close friends who would give him a place to stay or take him out to camp.

One day, after 5-6 years of no carving, Tom Webster passed by Jacoposie carving outdoors. Webster immediately saw that the talent was still there. His careful intricacy remained. Webster purchased the carving from Jacoposie and offered for him a workspace with them. Webster knew that he could not let such a talented, yet tormented, artist continue without support. They gave him a workspace next to their office and developed an excellent working relationship from thereon in. For the artist, this cooperative, friendly environment allowed him the freedom to work on his art without financial pressure or stress. Consequently, he could work on his own and further develop his art. 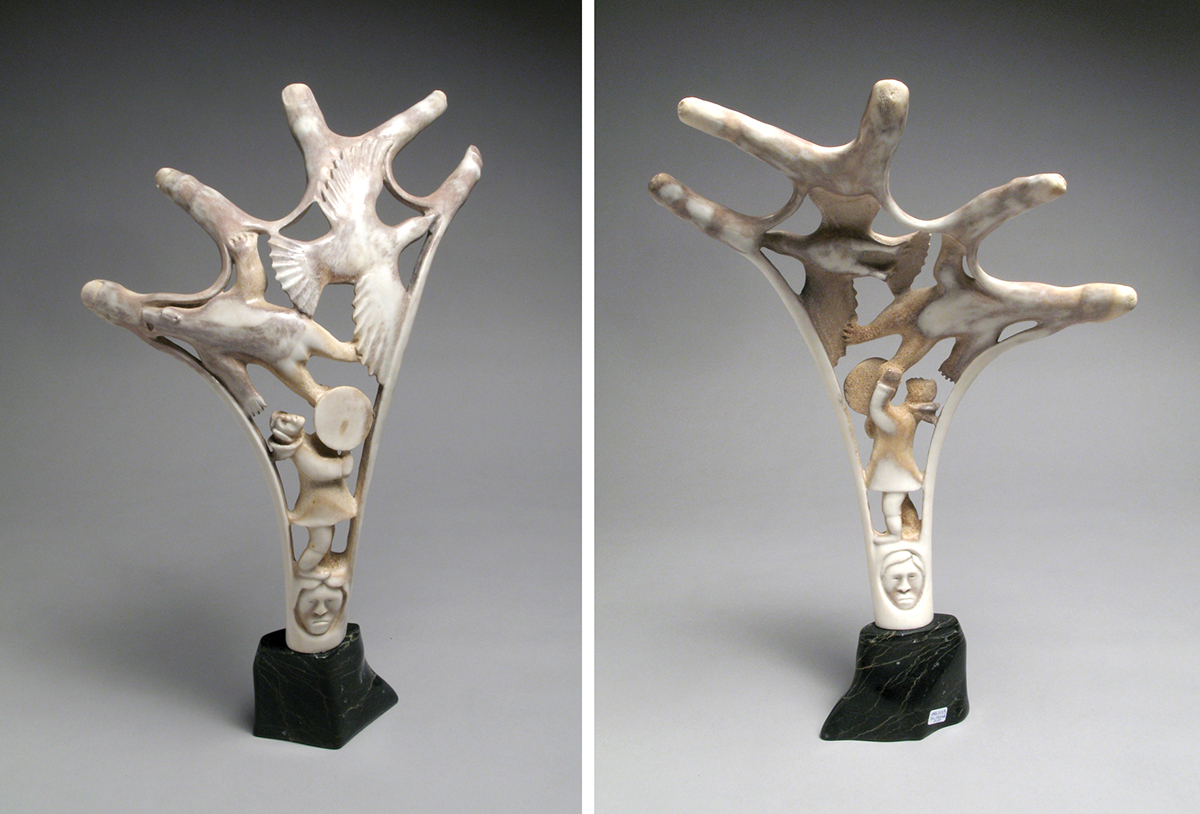 As an artist, Jacoposie is introspective about his work. He takes his time on each piece, and enjoys the solitude of his studio. The Websters do not question or push the progress of each piece. They know that as a master carver, his work requires immense concentration and a devoted artistic sensibility.

Very humble and studious about his work, Jacoposie carves a full 8 hours a day, leaving his hands stiff and sore. His tools are similar to a dentist’s drill, which allow him to complete the intricate delicacy of his work in antler. The large stone bases he includes with his bigger pieces are carved in a more traditional way. Preferring a small axe or chipping hammer to electric tools such as a diamond blade, this allows the artist more control over the image he has visualized. This technique, however, is physically exhausting and requires a great degree of skill and control to achieve the detailed and stylized subjects of the artist’s imagination.

Early Inuit beliefs in the transformative powers between humans and animals are important influences on Jacoposie’s imagery. The artist perfectly fuses his visualization with the materials, in order to create the harmony of this transition. One of his most notable carvings, Nunali, currently in the collection of the National Gallery of Canada (NGC), is composed of a complete set of caribou antlers set in the fully carved stone base of a caribou head. For Christine Lalonde, Associate Curator of Indigenous Art at the NGC, this piece is remarkable for its naturalism and large-scale. The artist’s title itself, translated to the “place where people live”, highlights the artist’s feeling for complementary and interrelated elements between people and the land. Lalonde describes that the narrative scenes carved into the antler that “by following the natural shape of the branches, the artist elicits a dream-like interpretation…of intricately detailed scenes that appear to flow as if from the thoughts of the caribou itself.” (Draft text, NGC curatorial file Jackoposie Oopakak, Nunali NGC41188). As such, the artist’s vision of the fixed relationship between people and animals parallels his astute ability to connect his artistic vision with the materials he uses. 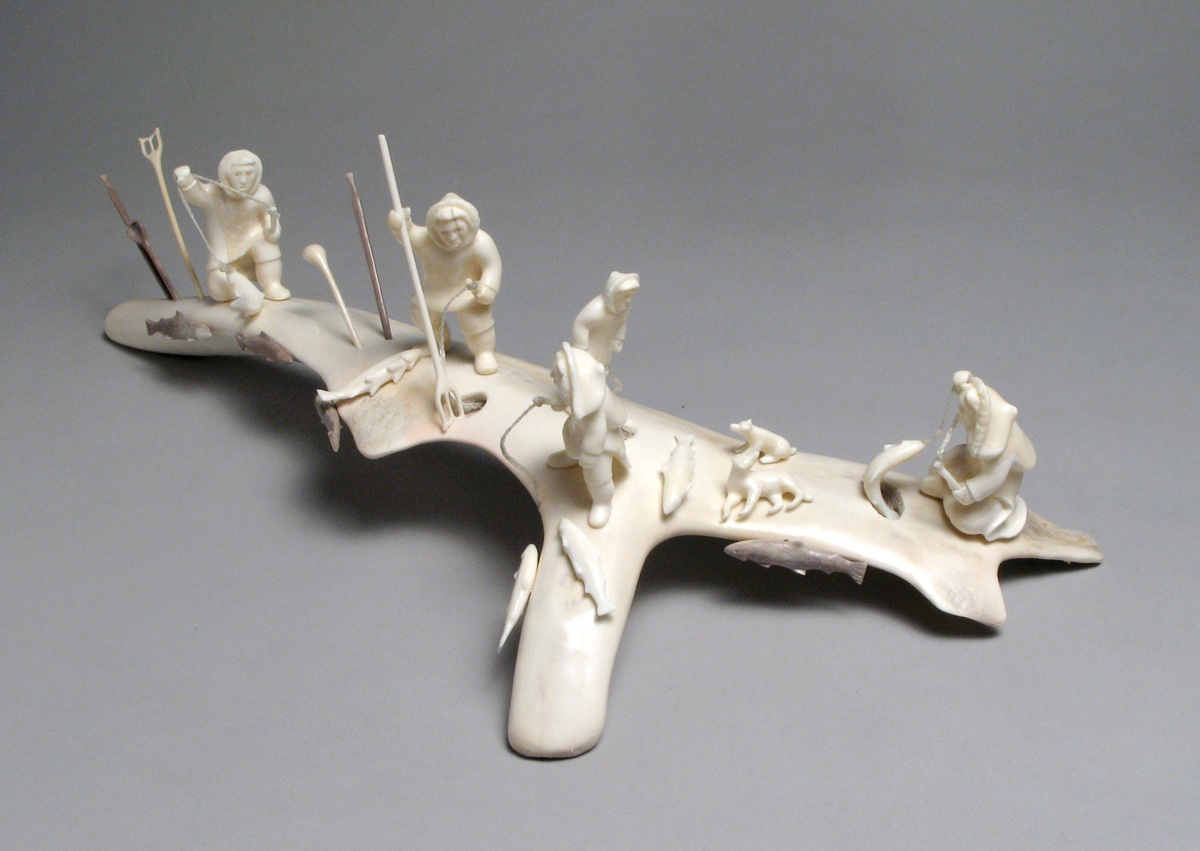 Similarly, the composition of Power suggests a scene in which the base depicting a transformation between a man and a caribou has the creature wrestling with a variety of visions depicted all throughout the length of the antlers. The shamanistic quality in this piece is strong. The size and the shadow cast by the expansive antlers and the creature of the base stuck in mid-transformation creates an eerie, powerful revelation in which the division between the animal and the man is unclear.

The stunning craftsmanship and imagery of The Hand show the artist’s ability to integrate a narrative into the existing shape of the antler. The elements of the scene bring the piece to life – as if at any moment the hand will shift with the movement of characters in the composition. In this, as Webster describes, “the human element links together all of the animals.”

The fascinating compositions are what transport Jacoposie’s work from the strictly technical to the superbly exquisite. In Fishing the lines of each character, fish, and tool are all carefully arranged to deliver harmony to the overall piece. Each fish can be moved to accentuate their realistic quick and unpredictable motions. Each piece is essential to the entire vision, in that they all serve a purpose in the composition. The unusual individuality of the carving is also notable. As shown with Walrus Hunt, no one individual looks the same. The variations in the tones of the antler are used as an advantage in this case to give the people and the dogs all distinct coats.

This wonderful attention to detail and fantastical imagery allows the viewer to be transported into the world of Jacoposie’s imagination. An artist of the middle-generation, Jacoposie is connected to the traditional way of life he experienced in his youth, and the world of modern-day Iqaluit, in which few artists are so adept at portraying this cultural past. His skill at conveying life into his carvings is most fascinating and well-deserved of this long-awaited recognition.