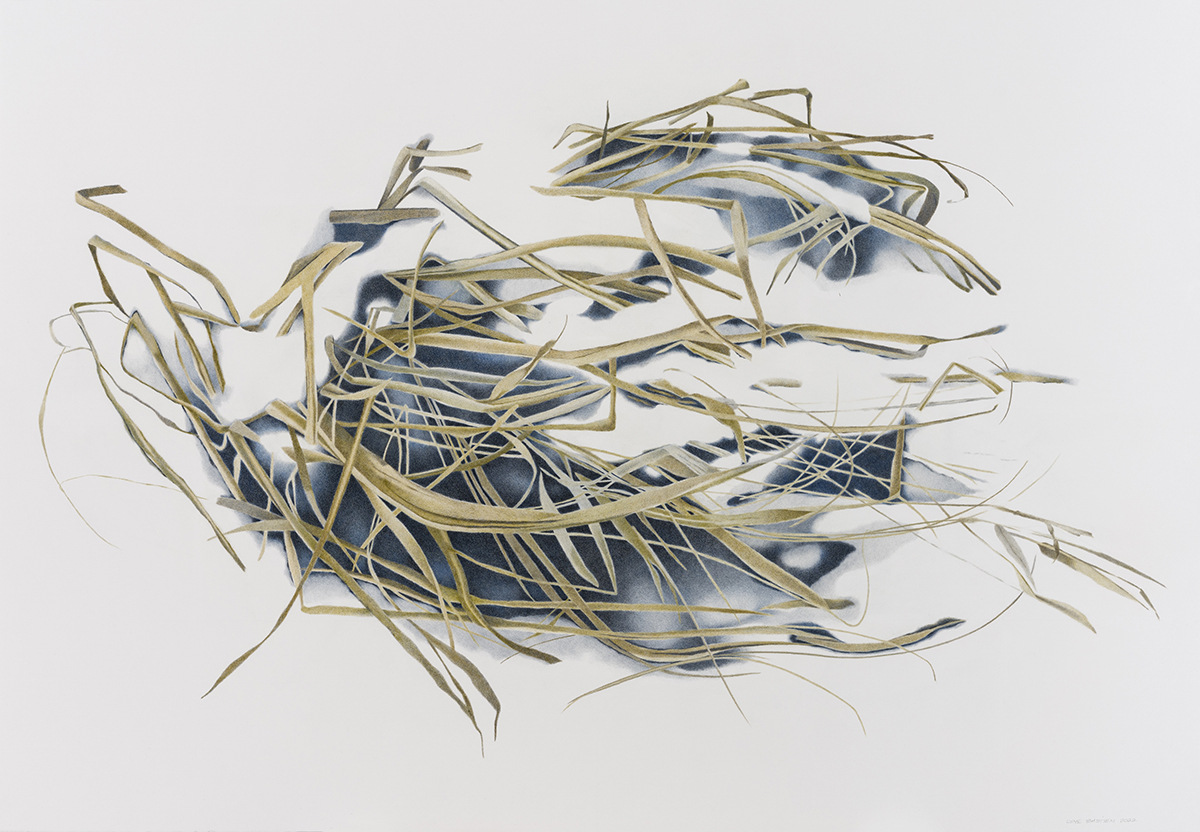 Feheley Fine Arts is pleased to present a solo exhibition of works by Montreal-based artist, Lyne Bastien, her first at the gallery. Born in Abitibi, a forest-rich region in western Quebec, Bastien’s affinity for nature began during her youth spent camping, hunting, and fishing in the wilderness near her home. In the 1990s, she moved to Montreal to complete a degree in printmaking at Concordia University. When Bastien moved to the Arctic community of Puvirnituq in 2014, it brought her back to her Abitibi roots, reinvigorating her appreciation for nature. The works in Dormance / Dormancy represent exactly this: a contemplation on the sense of quiet stillness of the North during winter, finding the beauty in its cool hues and the artist’s connections to home.

Bastien created this series after living in Nunavik (Arctic Quebec) for six years: one year in Puvirnituq and five in Ivujivik. During that time, Bastien travelled throughout Nunavik to conduct printmaking workshops for interested locals. She also collaborated with Ivujivik artists Passa Mangiuk, Qumaq Iyaituk, Mary Paningajak, and the late Louisa Kanarjuak  on several printmaking projects. Printmaking had become Bastien’s primary medium as an artist; she had not considered drawing since the early years of her career. She returned to the medium of coloured pencil for this exhibition after drawing with her Ivujivik colleagues. Swapping the fast-paced process of printmaking for a slowed-down method of drawing was a necessary process for Bastien, one that mimicked the tranquility of the quiet Arctic environment in which she was living.

Bastien’s subdued drawings of dried grasses and canoes are suggestive of a quiet, meditative space. Her approach with coloured pencils bears resemblance to the process of painting, as colours are layered and mixed to create new hues where light, transparent values are in contrast with others of stronger opacity. Through this process, Bastien masterfully captures the soft and delicate ephemerality of freshly fallen snow. In her more abstract works, such as Ivujivik III and Ivujivik IV (2020), Bastien’s paired-down shapes of colour emulate an atmosphere marked by frost and frigid temperatures. The process mirrors the subject – tranquil, contemplative, peaceful  – each a characteristic of Arctic winter. Her series is an homage to a period of pause, the dormant season before the Spring thaw comes around once again.

Canoes represent a fascination of Bastien’s while living in Ivujivik and appear in six of her drawings. She observed canoes around the community regularly, often overturned or fallen sideways, covered in a blanket of snow. For Bastien, the canoe doubly functions as a bridge between her time spent in the Arctic and her childhood growing up in Abitibi, where the canoe was likewise a staple of everyday life. This common image connects two places the artist once considered home.

In 2021, Bastien and her partner Marc made the decision to move back to Montreal permanently. The largest piece in the series and also the last completed, After the Blizzard (2022), depicts four overturned green canoes. This monumental work, over eight feet in length, symbolizes a closed chapter in the artist’s life. These overturned canoes will not be taken out on the water again in the Spring, implying a finality rather than a dormancy. Now based permanently in Montreal, Bastien finds herself living in an in-between space, adjusting to life in the city after half a decade spent among the quiet stillness of the North.

Lyne Bastien has been a practicing artist since the 1980s working in various media including printmaking, painting, and drawing. Her work has been exhibited at Feheley Fine Arts previously in the group shows Convergence: North/South (2019), and The Ivujivik Collective (2021). Bastien’s work can be found in the collections of the Bank of Montreal, the Montreal Museum of Fine Arts, Banque Nationale de Paris, and many more.