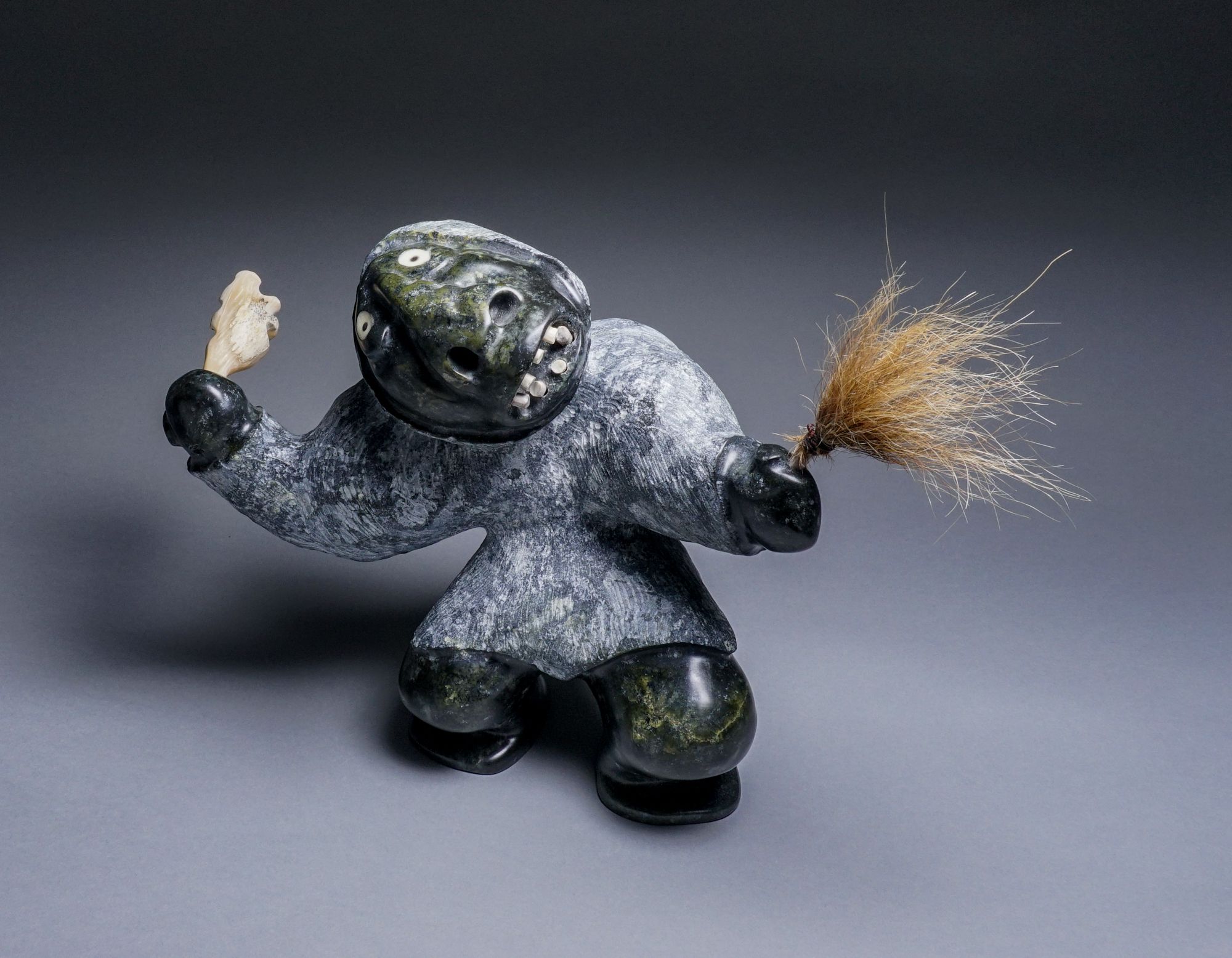 Uqsuqtuuq, the Inuktitut name for the community of Gjoa Haven, loosely means “plenty of blubber”, referring the many sea mammals that are local to the area. The community is also abundant in its artistic creativity. Since the 1970s, Gjoa Haven sculptures have been renowned for their spiritual energy, characterized by eccentric facial expressions and exaggerated forms seen in depictions of shamans, hunters, and animals. Land of Plenty: Gjoa Haven Sculpture brings together a number of contemporary works that carry on the powerful tradition of the Gjoa Haven style.

This exhibition is notable in that it features works by two generations of carvers: those who have been involved with the Gjoa Haven carving program since the early days, and their sons and nephews who carry on the grotesque aesthetics and creative mixed-media approach of their elders. Uriash Puqiqnak, Ralph Porter, and Andy Palongayak are three senior artists who have been involved since the 1970s. While Puqiqnak sold his first carving in 1975 and Porter began his practice in 1976, [1] Palongayak served as manager of the Kekertak Co-operative in the early days, even facilitated flying stone in from Kuglugtuk (Coppermine) before a closer serpentinite quarry was located. [2]

The younger generation of carvers featured—Moses Kamookak, Wayne Puqiqnak, and John Keknek—compliment their forebears with their own odes to the flamboyant and the spiritual. In tandem, they also explore other avenues of more conservative carving styles and subjects, like the many animals that frequent Gjoa Haven, and in doing so continue on the journey of developing their own styles and contributing to the evolution of the community’s renowned aesthetic.

The intergenerational appetite for carving continues on in Gjoa Haven today. Many contemporary carvers are influenced by the great Judas Ullulaq (1937–1999), who moved from Taloyoak (Spence Bay) to Gjoa Haven in 1982 and brought with him the energetic carving style that the community has become well-known for [3]. Carvers working in recent years like Uriash Puqiqnak and his son, Wayne Puqiqnak, have adopted Ullulaq’s stylistic features of wide-eyed, open-mouthed, nostril-flared dancing figures. At the same time, they imbue each piece with new distinctive characteristics. Both Uriash and Wayne employ the use of texture and strategic non-polishing to emphasize clothing in their works, like in Uriash’s Frightened by Lightning (2019) and Wayne’s Hunter (2019). Uriash also uses the unconventional material of muskox hair to convey the absurdity of a shaman’s frayed locks just struck by lightning. With Ullulaq’s lasting influence at their core, these new works represent contemporary Gjoa Haven sculpture which pays tribute to the past while refreshing itself for the future.

Other artists, like newcomer Moses Kamookak, pursue styles off the beaten path. In both Sedna (2016) and Hunter (2016), Kamookak depicts elongated, shrouded figures that verge on the macabre. His unique style allows a parka to double as a cloak, imbuing both figures with a mysterious essence. His creative mix of media is equally unique: utilizing drastically different types of stone to distinguish face, body, implements, and ground. Notably in Sedna (2016), Kamookak meticulously inlays miniscule ivory detailing on the Sedna’s face, demonstrating his incredible skill and eye for ornament. This Sedna is both absurd and ornate; an odd yet intriguing take on the Inuit goddess of the sea and an exciting look at what is to come of the future of Gjoa Haven sculpture.