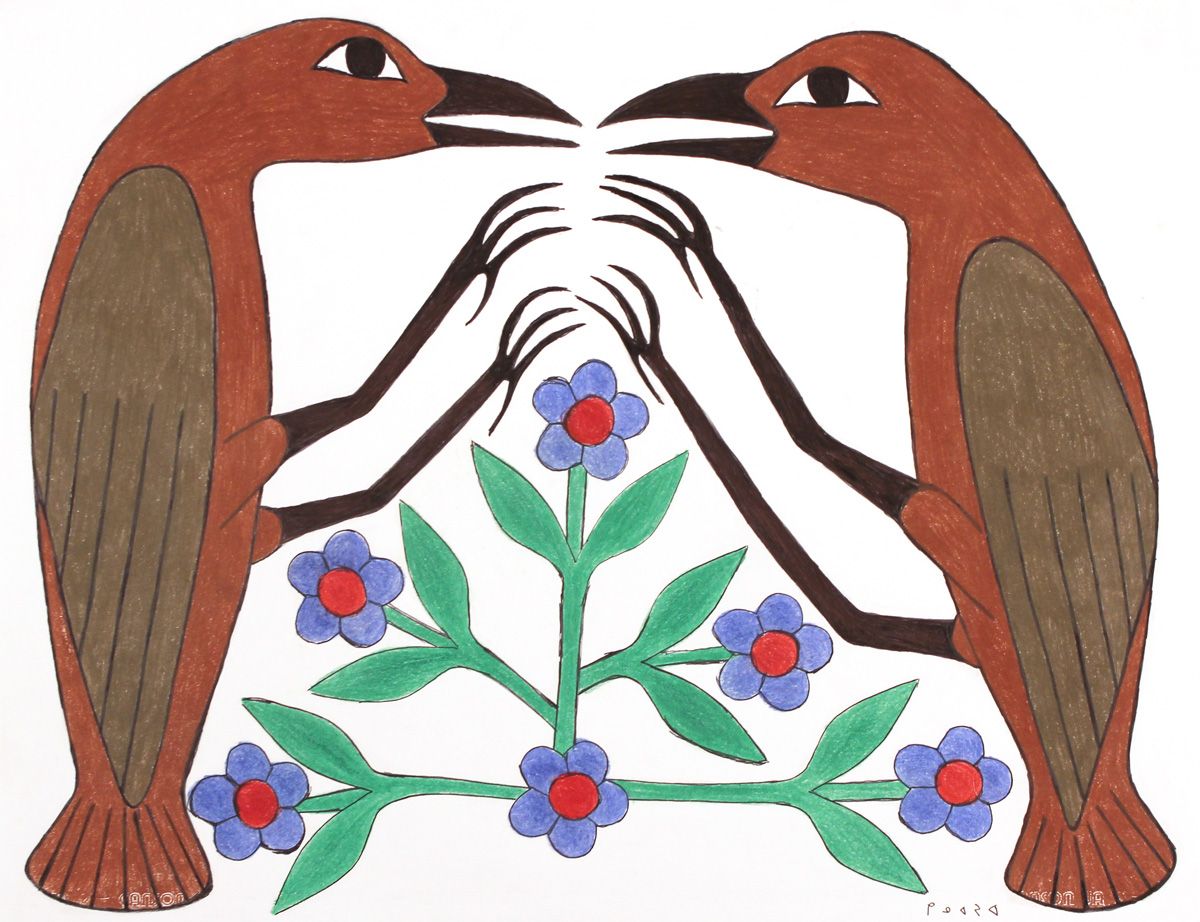 A cultural ambassador for the art of Canada, Kenojuak Ashevak was an award-winning artist exhibited worldwide. Born in 1927, she was an early participant at the graphics studio in Kinngait and quickly established herself as the most successful artist from the Arctic; her works are instantly recognizable. Among her many honours and achievements, she received two honourary doctorates and was presented the Governor General’s Award for the Arts. She is a member of the Royal Canadian Academy, a recipient of the Order of Nunavut and a Companion of the Order of Canada.

Although she has worked with sculpture, Ashevak is best known for her drawings and prints. Through her symmetry of bold shapes and bright color, she depicted scenes of Arctic animals, camp life, transformations and spectacular beings. Her images have been included in almost all of the annual print releases, beginning in 1959 to the present day. From 1994 to the present day, Feheley Fine Arts has presented six solo exhibitions on Ashevak. Through this exhibition, the gallery focuses on her creative eye and skilled technique for drawings and prints, specifically her early etchings.

Drawings
In the late 1950s, Kenojuak Ashevak was encouraged to work with pencils on paper due to her successful designs in beadwork and inlaid sealskin. As she developed into a prolific artist, her objective was to create visually pleasing drawings, not necessarily realistic. Ashevak did not conceive her scenes beforehand; her hand led her mind and she had no fear of making mistakes as she would re-work areas in her scenes until she was pleased. As such, her distinct graphic style with dynamic lines were often too intricate to print. Her prolific nature kept her working until her death in 2013.

Etchings
Introduced to Kinngait Studio in 1961, etching was the closest printing method to drawing as it permitted the artist’s hand to directly engrave imagery on the copper plate. Although etching only allowed for two-dimensionality, Ashevak made good use of linear markings through her characteristic cross-hatches to indicate texture. Moreover, she would superimpose or layer her subjects to establish a sense of dynamism to visually enhance her etchings. After engraving copperplates, she would present them to the studio for printing.

Prints
As Kenojuak Ashevak produced drawings, the master printmakers of Kinngait Studio would choose her artworks from a body of work. Through their technical expertise, the printmakers transferred her images into prints in either stencil, stone cut, linocut, or lithograph. Ashevak did not partake in the printing process – she would watch the progress. Regardless of the printing technique, her prints are easily identifiable as her form and subject matter remained consistent.