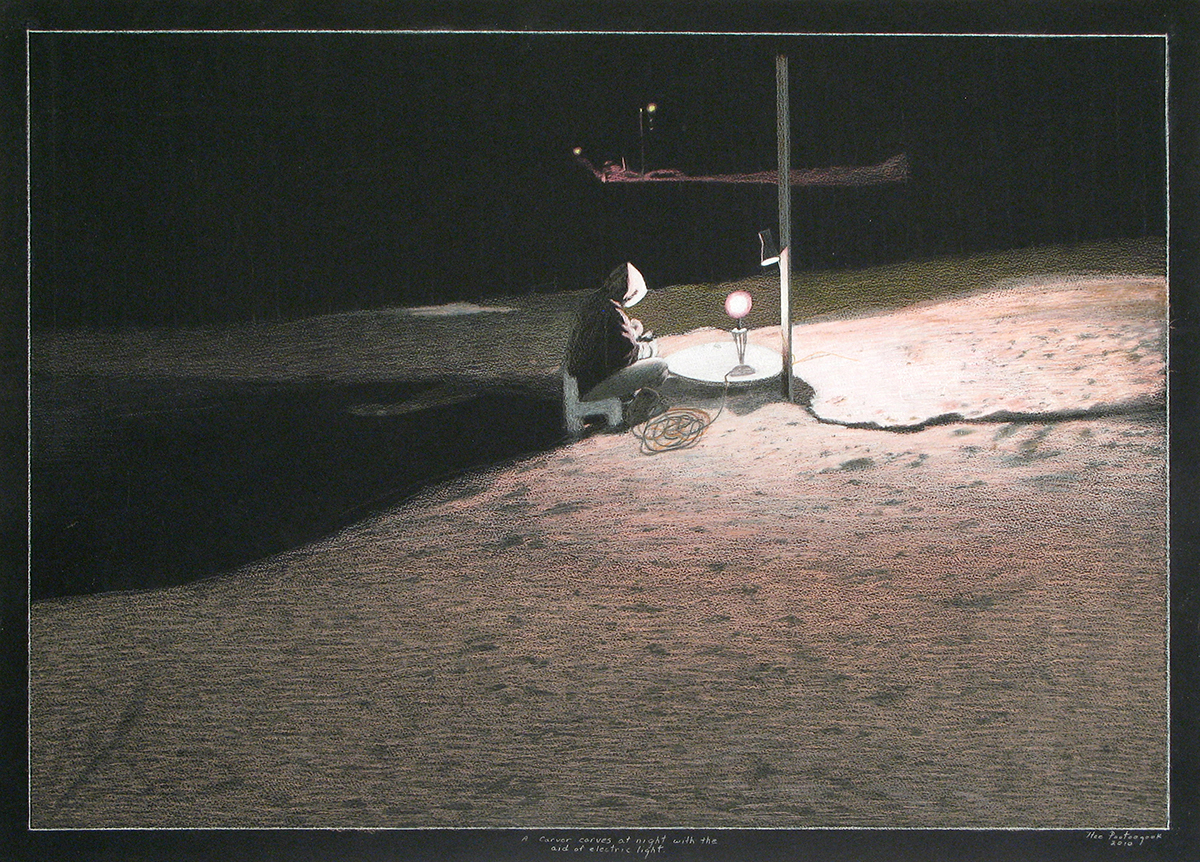 Although Itee Pootoogook is an emerging graphic artist, his career began many years ago. He was a carver in the 1970s and in the 1980s sold his first drawing to Terry Ryan, then manager of the West Baffin Eskimo Co-operative. It has not been until the last five years that Itee has focused his work as a graphic artist – creating some of the most compelling and intimately detailed drawings to have developed out of this world-renowned artistic community. This hiatus from the art world may have provided him with a sensibility of form and colour that is rare among untrained artists.

Born in Kimmirut in 1951, he moved to Cape Dorset as a child with his father, Paulassie Pootoogook, a prominent carver. Itee’s graphics were formally introduced to the Inuit art market in 2008, when his print Looking South was included in the Spring Cape Dorset Print Release, which focused on work by contemporary artists. The pair to this print, Looking North, was released in the Fall of the same year. Whereas the former illustrated a pair of feet in kamiks in front of a summer-time landscape, the latter print showed a woman’s torso wearing red mitts in the foreground of a winter-time background.

Pootoogook’s choice of colour and subject matter are altogether new in relation to the history of Inuit graphic art. The sublime images he creates invoke a kind of chronicling effect. The seasonal changes, community events, and daily life in Cape Dorset seen in his drawings, reflect the changes in the experiences of today’s Inuit contemporary artists. His drawings have a different feeling from his printed images. Itee is often inspired by his old photographs from the 1970s and 1980s, taking people or parts from a photograph, but changing the background or setting of the scene to make the image his own. He works most frequently with graphite and pencil crayon. Common comparisons of his work with non-Inuit Canadian artists, such as Christopher Pratt, Alex Colville, or David Thauberger, are relevant in connecting Pootoogook with a wider contemporary audience, but ultimately his work is most significant in a Northern context, where his treatment of landscapes and portraits, colour and shade, present a modern look at Inuit life.

Expressiveness of the Land

Itee Pootoogook’s landscape drawings have become his most recognized imagery. Using graphite, he creates a sense of smoothness and serenity in a seemingly cold and empty landscape. His coloured pencil landscapes take on a different appearance. Itee’s eye for colour is remarkable, and often challenges what we think of as the naturalistic colours of sky and sea. While the colour range found in the play of sunlight in the far north can be very unusual to southerners, the bright blues and greens, or powerful pink, yellow and orange tones can seem surprising, but bring us closer to the experience of an arctic setting. 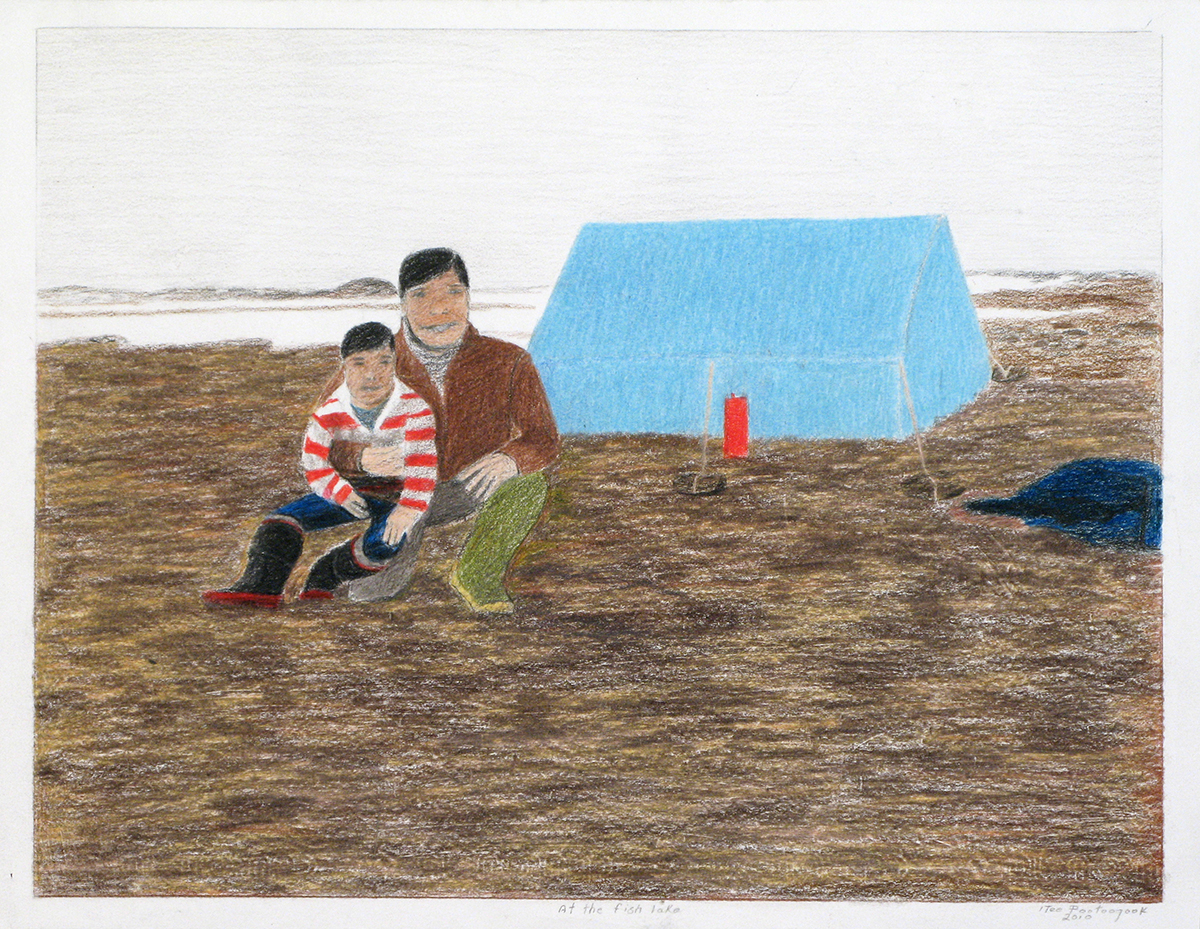 In all of his landscape drawings, Itee’s use of colour can change the scene from day to night, or from past to present. For images that depict similar scenery, as with View from the Valley and Winter Time in the Valley of Cape Dorset, the overall images become starkly different through the use of the bold blue with browns, as compared with the delicate graphite work. The colour makes the landscape come alive, whereas the grey tones produced with graphite give the appearance of the image as a memory from the past.

Pootoogook’s portraits consist of family, friends, and members of the Cape Dorset community. Whether in graphite or pencil crayon, they are drawn with a visible affection for his subjects. The gradation of shading in his black and white drawings is poignant, whereas his coloured portraits encompass more of a captured moment from the artist’s life.

Some are borne out of photographs, such as At the Fish Lake, in which Itee has depicted himself with his son, now in his 30s. The image brings about a memory, after which Itee often alters the details of the photograph to infuse it with more intimacy and feeling. Other more complex ideas show his translation of photographs into original drawings as something entirely unique to his work. In A Bundle of Fish & the Shadow of the Photographer, Itee has completed his self-portrait in shadow, in which his abstracted composition demonstrates that his use of photographs are the point of inspiration, and not a controlling element for his work.

Other images like This Guy is Wearing [a] Traditional Parka and Wearing an Amouti, do not depict specific people. These drawings – from the details of the face and hair, to the invented setting of the interior of a home, are created solely from the artists’ mind. Itee explores his imagery from a number of sources, confirming he is open to different forms of creative motivation. 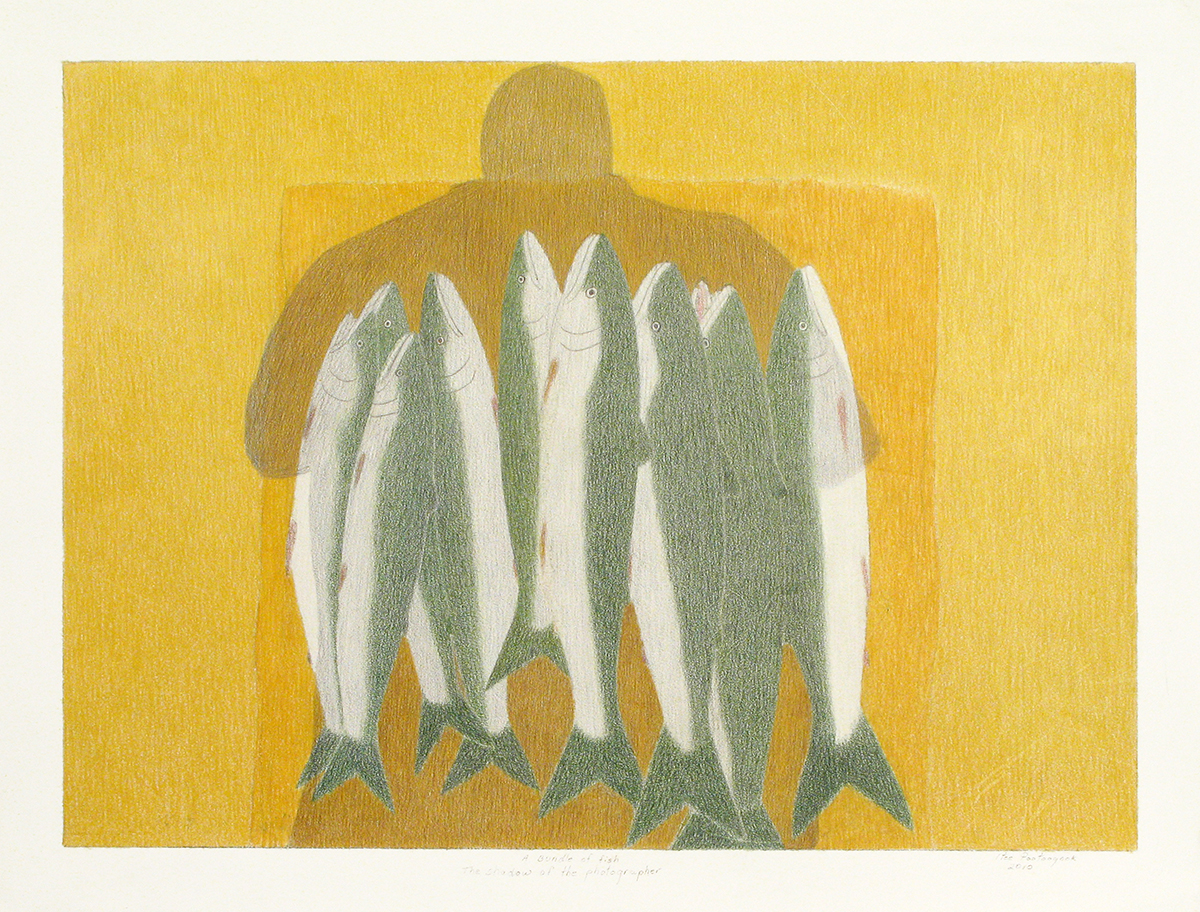 Itee explores still-life portraiture with a variety of subjects. From swimming fish frozen in motion, hand tools, or a bag of flour – the artist demonstrates a highly concentrated attention to detail and desire for realistic interpretation. His study could stem from a photograph, a memory, or from real-life. In any instance, Itee’s approach is thoughtful, yet experimental. The complexity of creating the reflection in the blade in Handsaw, the matter-of-factness of West Baffin Eskimo Co-op Symbol, or the minute detail in Nordair Plane Takes off the Runway, all show the distinctive elements of his developing style of highlighting the everyday.

A Window on Cape Dorset

The various illustrations of houses and buildings in the community of Cape Dorset are among Pootoogook’s own favourite images. It is the poetic quality of his drawings that make his work so moving. They may show boarded-up or broken windows of decades-old Cape Dorset prefabricated housing, as with An Empty House or Vacant House with Broken Windows, or more current structures such as those in Garage and Town. His adeptness with perspective and line are powerful tools for creating the subtle strength and unnervingly realistic depictions that make his drawings of houses and other buildings unexpectedly powerful. His ability to use impeccable technique while imbuing his drawings with meaning, are what appeals so many to his work. The thoughtful composition in An Empty House works to draw the viewer’s eye into the drawing along the diagonal line, while maintaining a kind of minimalistic energy that brings harmony to the image.

Working in the Dark

Pootoogook has an extraordinary ability to visualize an image on black paper. While choosing the colours that best translate onto the darker paper is an important element, it is his ability to use the darkness to his advantage when working with those colours that enables him to produce such innovative work. There is no other artist working in Cape Dorset today who understands black paper with the same sophistication. In Kitchen Window, Itee has produced a magnificent work, in which he has drawn the foreground and the details of the kitchen entirely in shadow. This reversal of light is a clear demonstration of the strength of his creative process and ability to carry out the beautiful images he envisions. Itee often employs a realistic translation from an image combined with his own imagination. This depiction of the artist’s kitchen is inspired by one of his photographs, although he explains that this is not the landscape outside of his window, but a picture from his mind. 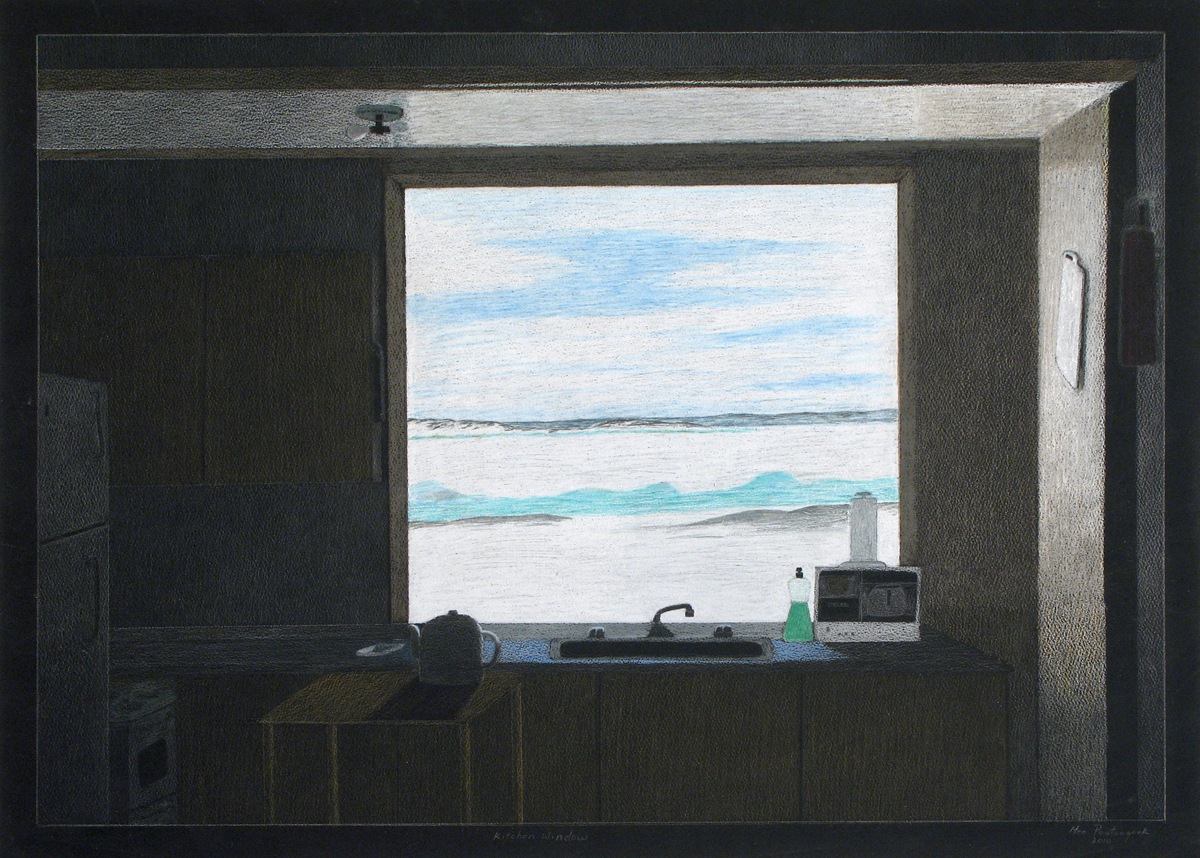 In the drawing, The Water Level is Rising, Itee has conveyed a seascape with the movement of the clouds and the brilliant colours of the Arctic’s night sky. By varying the depth of his colour layering, he creates a dramatic effect. This contrast produces the feeling of the shifting clouds over the darkening water, and the movement that the title implies. Working with coloured paper has given Itee the opportunity to challenge himself and produce drawings that display his confidence and extraordinary vision as a graphic artist.

View on the Arctic

The way Itee Pootoogook sees Cape Dorset is skilfully and carefully represented to the world through his arctic lens. Often calm and serene, his images are deeply moving for their subtlety of composition and beautiful use of colour. Whether it is with his minimalistic landscapes, or capturing a spontaneous moment in his portraits, Itee’s drawings represent the way he has thoughtfully examined his surroundings. He is relevant to the discussion of the new north for the way in which he composes a house in a landscape, abstracts the Arctic sky into bands of bold colour, or changes a photograph or memory into a work of art. This is what makes him so contemporary.