Interview with Niap on her show “Silavut” 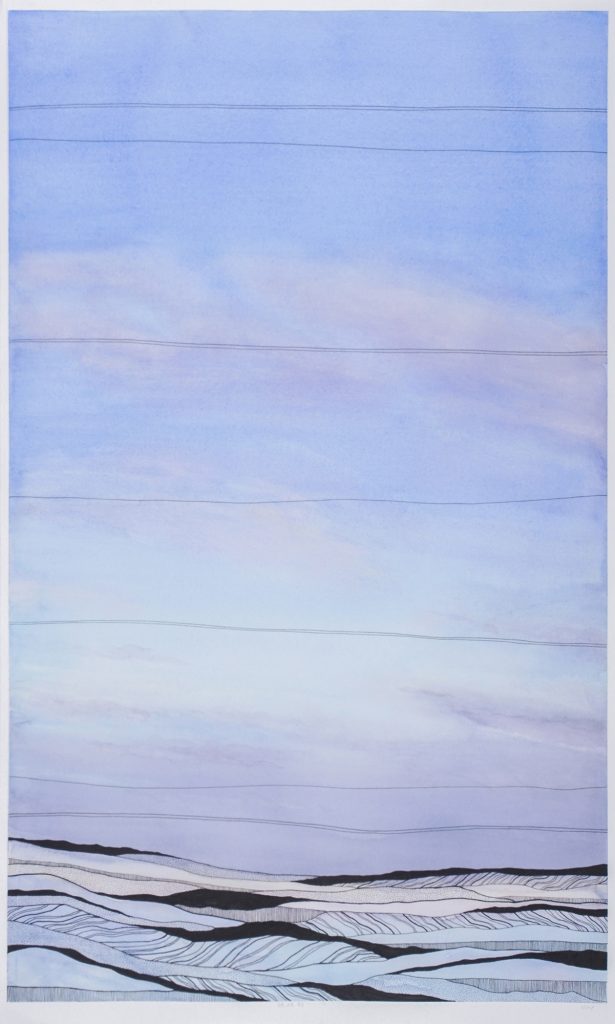 Niap’s second solo show at Feheley Fine Arts, “Silavut,” presents work celebrating light; an expansive light, one which is unique to the North and at times can last months on end. In parallel, the work also speaks to a lightness in spirit, one so nourishing after a time of darkness and isolation.

To mark the closing of Niap’s sold-out show, we interviewed the artist via telephone to further understand the delicate work created as a tribute to the end of isolation, a light at the end of a long tunnel.

These works came from a time of isolation. Can you speak on that experience and the influence it had on your art making?

Niap:  I was traveling back to Kuujjuaq after spending time in Montreal and there was a mandatory 14 day quarantine. It was during the holiday and was the first time that I was about to go back home [to Kuujjuaq] and not see my family. I was staying at my brother’s place alone, no internet, no tv, no telephone. The only thing I was allowed to do was go for walks by myself. I’ve lived in the North for so long and I’ve always appreciated the light and atmosphere, but it never hit me until then, when I was only able to go on these isolated walks.

I had not come up with an idea in terms of art or writing at the time. It was difficult. I was without inspiration but when I got home to Kuujjuaq, it was flooding. I noticed the atmosphere and light and I went back to try to capture that. That’s when I had the idea of focusing on the light rather than sunset skies. I wanted to think about atmosphere and the feeling of being completely surrounded by blue light or grey light.

On these walks would you take photos? Do a sketch or colour study? Or work from your mind?

Niap: I was inspired by what I was seeing and I made seven small watercolours which were different in terms of line work, this gave me the idea of something more focused. I knew this show was coming up and I had trouble starting. It was already the end of February and I still had not started – I had kept pushing it off. I got home [to Kuujjuaq] and seeing family and friends can get busy, but I kept thinking to myself,  “the date is coming up.” One day I said “today is the day,” and it ended up being the first day of spring. It was a nice coincidence. That day I had seen the sky and ambience, and I said to myself, “this is the sky I am going to start with.”

Niap: In my practice I am experimenting a lot. I feel I’m still new and experimental, however my past work informs my present in terms of the aesthetic I like, I’ll reuse a certain technique. Ink or pen is something I enjoy and keep doing. I’ll work until the feeling of the series is gone. At a certain point I can’t make more of it, it doesn’t work anymore. The feeling isn’t as strong. Silavut is one of those series where I can feel it fading away. Having said that, the techniques I learned in the series are very controlled and I can carry this on into other work. I am still learning. The control in smaller works is much easier, but when I started these bigger pieces I was hit with the feeling that it is not at all the same. There are instinctive ways I would premix a whole bunch of colour, but applying and controlling it was very different [on the larger paper]. Through this process, I would make mistakes, learn from them and start over. These are techniques I would try to push. There are some skies which are realistic which I want to push. I love realism in watercolour.

Can you speak about the decision to depict a horizontal landscape on a vertical piece of paper?

Niap: I wanted to give the drawings height, the direction of “up” rather than wide. The idea of the series is that I wanted the work to invoke joy, light and atmosphere. I wasn’t sure if I should invest myself in a concept that talked about difficult realities or mental health, I wasn’t sure if it was a good idea. So many people suffered from isolation and were confronted with their own issues and difficulties, the idea was to do something so light in concept, something pretty, something airy, something that had the sense of weightlessness.

Your work has certainly brought so much joy, the response had been wonderful.

Niap: I don’t know if I was ready, after being in a dark time, I didn’t know if I wanted to spend 6 months analyzing it and trying to depict it. After a hard time people want to let go of things and move forward and when the time comes we can do an introspection.