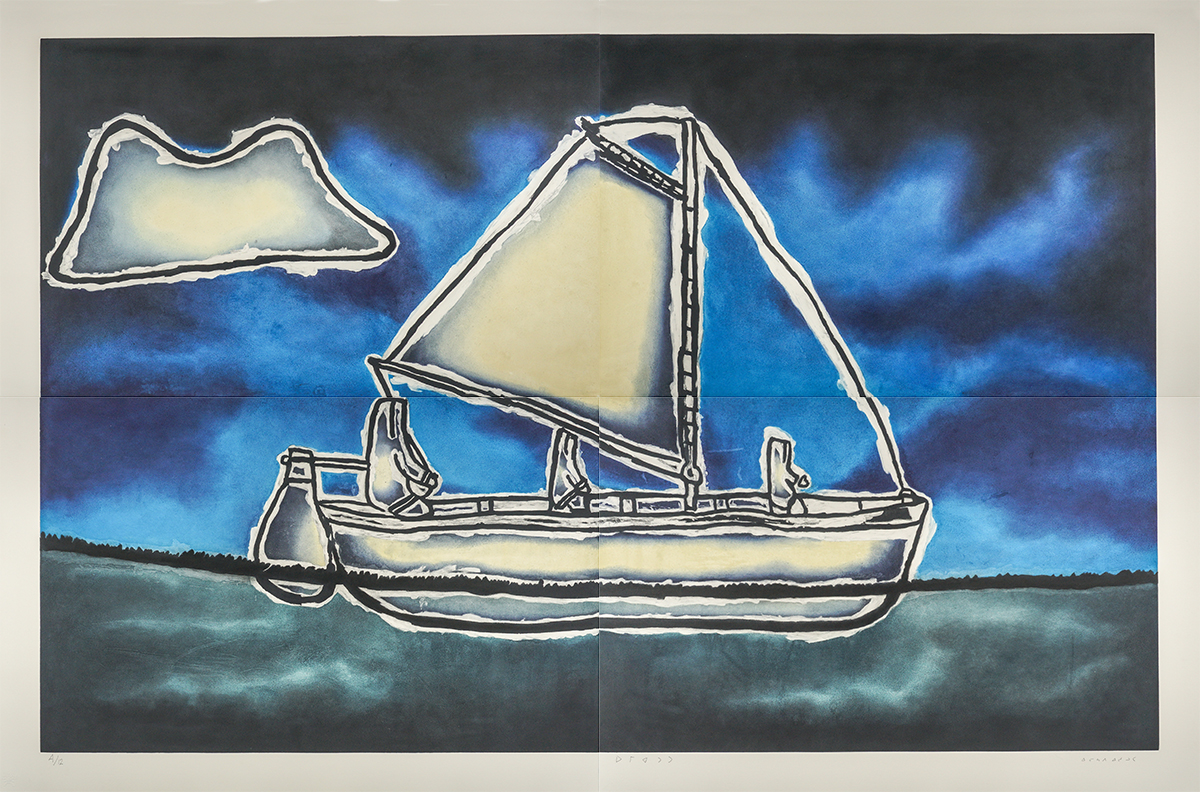 This exhibition presents a selection of primarily prints and two oil stick drawings by Elisapee Ishulutaq (1925–2018), one of Pangnirtung’s most celebrated artists and respected cultural leaders. Known for her narrative-driven images, Ishulutaq’s work reflects the northern experience she knew. Her pieces in this show celebrate the seasonal hunting camp lifestyle that the artist lived in for the first half of her life; each image imbued with delight and cultural pride. In addition to two large-scale oil stick drawings, Elisapee Ishulutaq – Prints & Drawings includes a number of etching-based prints that the artist made in collaboration with Studio PM, a renowned printmaking studio based in Montreal. This collaboration lasted eighteen years.

Ishulutaq’s artistic story is remarkable. She was born in 1925 at Kagiqtuqjuaq camp on Baffin Island and moved permanently to the settlement community of Pangnirtung at the age of 45. The move was significant—like many Inuit across Baffin Island at the time, Ishulutaq was leaving the primarily traditional camp-based lifestyle that she knew for a settled hamlet based on a wage economy. Her move coincided with the community’s adoption of an artmaking program as the Pangnirtung Print shop originated in 1969, with the first annual print collection was released in 1973.

Artmaking was adopted quickly by Ishulutaq. She produced graphics for the inaugural Pangnirtung print release and each subsequent collection up until 1988. While her start as an artist came later in life, she would eventually achieve renown as a nationally recognized artist. Ishulutaq’s career spanned an inspiring 46 years. She created her last major piece at the age of 91, a nine-metre-long mural created in memory of a suicide committed in the 1990s by a young boy in her community. Throughout nearly half a century, Ishulutaq stayed true to representing and celebrating the traditional aspects of Inuit culture. As a respected community elder, she passed traditions and knowledge down to the younger generations through both her art and oral stories.

Ishulutaq’s work has been exhibited nationally and internationally in Germany and Italy. In 2014 she was awarded the Order of Canada. Today, her works can be found in the collections of the Art Gallery of Ontario, the National Gallery of Canada, the Montreal Museum of Fine Arts, the Dennos Museum, and many more. The solo exhibition Elisapee Ishulutaq: My World is on view at the McMichael Canadian Art Collection in Kleinburg, Ontario until October 30, 2022.