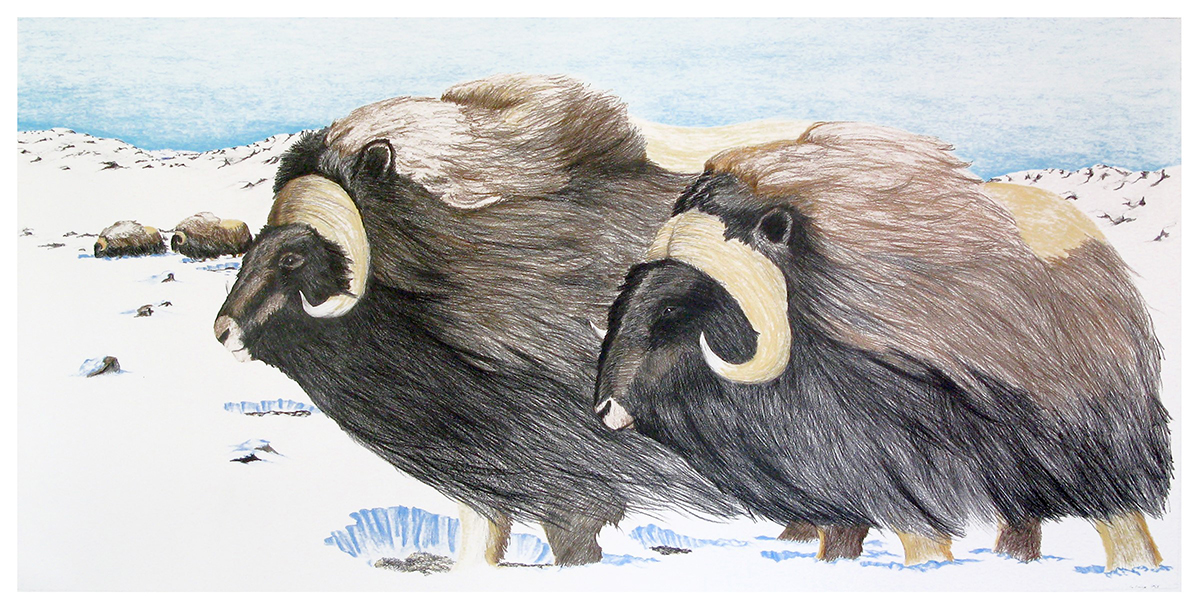 Tim Pitsiulak has come to represent the archetype of the contemporary Inuit artist. His style is highly individual, yet infused with influences from his culture’s traditional past and complex present-day life. Born and raised in Kimmirut, Nunavut, Tim moved to the community of Cape Dorset around 2001. His parents, Temela and Napatchie Pitsiulak were carvers. His aunt, the renowned Cape Dorset graphic artist, Kenojuak Ashevak, has been an influence on his artistic career.

Tim learned to carve when he was a child and became an accomplished carver. He also has extensive training in jewellery-making, having taken both a course in Kimmirut and later the Arctic College workshop in Cape Dorset, Tim eventually taught the same course (2009-10). He is now drawing full-time in the Kinngait, or the West Baffin Eskimo Co-operative (WBEC) drawing studios – a centre for artistic cultivation in Arctic Canada.

A devout hunter and family man, Tim is constantly inspired by the characteristics of his community and the surrounding land. His astute observations of animals and landscapes, combined with his technique allow him to create highly realistic depictions. Asserting that “drawing is the basis of everything”, Tim’s attention to detail and strong graphic quality are what make his work so exquisite. His recent large-scale drawings (they typically measure 4 x 8 feet) truly demonstrate his amazing technical skill and subdued contemporary undertones. As Tim states, “I like challenges”, an attitude well-suited to the Kinngait studios, a place where experimentation is encouraged and nurtured. 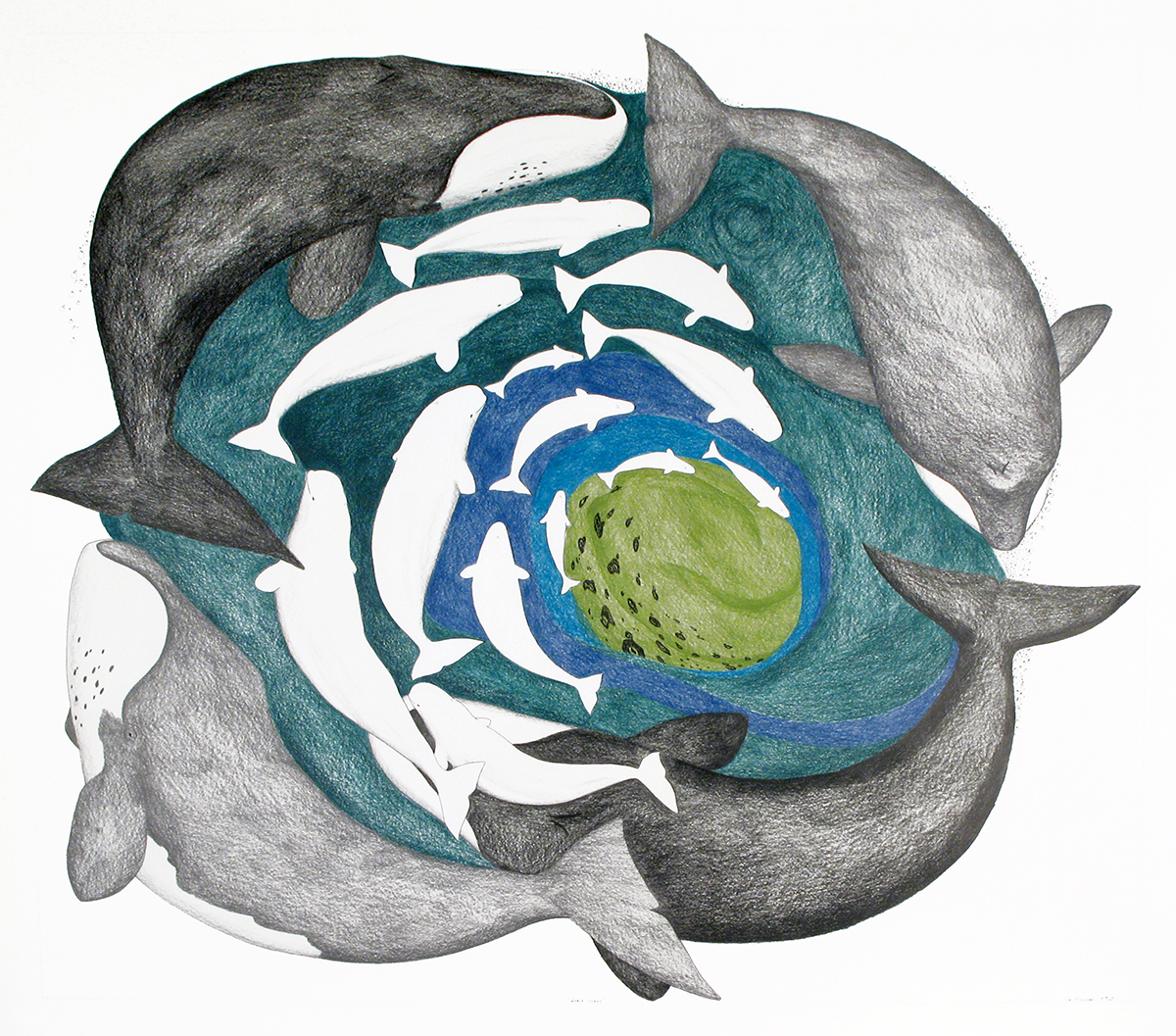 His first solo exhibition in November 2009 proved that the appeal of his drawings was undoubted. His work is in the collections of the National Gallery of Canada (NGC) and the Art Gallery of Ontario (AGO). Recently he was prominently displayed in major exhibitions and their accompanying catalogues: Uuturautiit: Cape Dorset 1959-2009, 2009 (NGC), and Inuit Modern: The Samuel and Esther Sarick Collection, 2011 (AGO).

Well-known for his portrayal of the magnificent animals found in the Arctic – polar bears, bowhead whales, walruses, and belugas, Tim’s style has developed into the most highly-realistic and carefully crafted of the Kinngait graphic artists today. His skill in portraying the animals accurately, yet infusing them with life and movement is what draws so many to his work. Whether large in size, as with Grazing Muskoxen, or not (Avviiq Tunniliik), the viewer can feel the wind and water moving the animals along. These drawings are done less with an emphasis on the animals in their real habitats and more with the shape and line of the animals themselves, as with Whale Songs, which maintains a certain playfulness that relates to the artist’s sharp sense of humour.

Many of Tim’s drawings depicting animals and hunting scenes are done in a manner that lends anonymity to the subjects, allowing them to serve as representational figures of a more generalized narrative scene. In fact, these drawings are largely autobiographical, since Tim identifies himself both as a hunter and an artist, although the faces are often obscured or stylized as to be not specifically recognizable. Many are based on memories or experiences, but lend themselves to a more universal audience. This ambiguity of subject offers a heroic air to these animals and hunting off the land in today’s Arctic. By simplifying the subject he imparts a monumental feeling to the image – changing it from a single person or a single memory to a more sublime power of imagining. 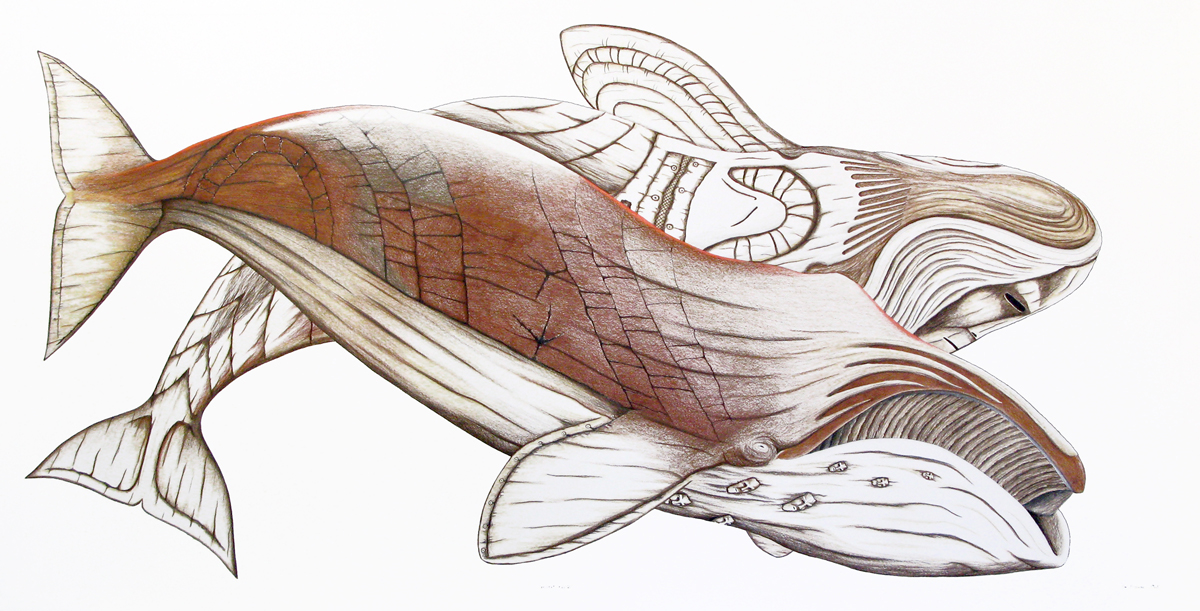 The massive scale of his work combined with the calm and clean images make his drawings stunning in appearance. His extra-ordinary realism and surprising composition couple with a depth of content that take his work beyond the realistic. In Ancient Aqviqs, Tim has gracefully portrayed two bowhead whales decorated with details of traditional Thule and Dorset masks. Their bodies are rendered in brown tones, so as to give the appearance of aged ivory. Tim incorporates imagery of artefacts from his traditional culture sometimes found in the hills surrounding Cape Dorset and well illustrated in books, to quietly integrate with the dominant shapes of his subjects (Avviup Attungninit Tritych). The approach is a subtle nod to the historical value of such objects, rather than their utility. Traditionally, such objects would have been used in everyday life, but today they are found objects to be displayed, researched and illustrated within the same community.

In scenes of modern-day life, we see a similar technique of subtlety. In Some Things You Rarely See Up North, the artist has drawn a man taking off his boots and hanging up his winter coat having just come inside. “An Inuk in a suit” is Tim’s response to the title’s implication. A seemingly benign image, Tim has, through clever titling, made deeper a comment than what appears to be there at first glance. A true jokester, Tim enjoys imparting his sense of humour in all facets of his life, including his drawings.

Most recently, Tim has expressed his interest in experimenting with new ideas and media that have been introduced in the WBEC studios. His drawings on black paper, which require a very different approach of shading and colouring, show his artistic curiosity as he tests out the space of the paper and methods of narrative progression. He describes his first drawing on black paper as a depiction of the “late summer landscape when the days are shorter and you see a lot of moonlight”. For him, it was very different to start drawing on dark paper, because the pencil crayons have to be used very differently, as the “colours show more.” 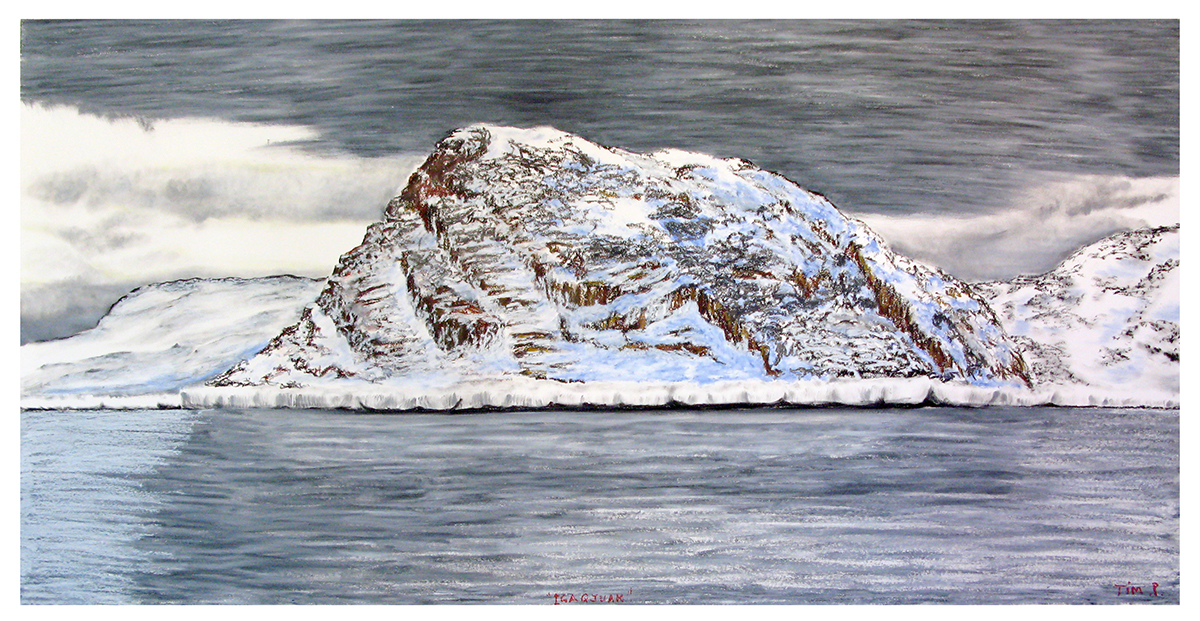 The medium of oil stick, which was initially introduced in the Cape Dorset studios in the late-1990s, and picked-up again in 2006 when Montreal printmaker Paul Machnik ran a workshop, attracting the likes of Arnaqu Ashevak, Shuvinai Ashoona, and Jutai Toonoo. Recently (2011), Tim tried his hand at the medium. The progression from the precision of pencil to the looser medium of oil stick is difficult and not all artists can make the transition. Tim had no difficulty with this at all, as demonstrated by his first venture into oil stick, Narwhales, which shows his instant grasp of the characteristics and ‘feel’ for the medium as he created this animated depiction with subtle colour variation of one of his favourite subjects.

His second venture into oil stick, a landscape titled Igaqjuak, perfectly fuses the artist’s large-format imagination with his detailed technique – a task very difficult in this medium. This is a monumental work, one which clearly demonstrates Tim’s talent and potential.

Having developed his drawing over the years, Tim has earned himself a place among the elite of Cape Dorset’s history of artists. His intricate and skilful technique, particularly in large-scale drawing, shows his individual style of portrayal. The monumental scale of his work, coupled with his ability and desire to explore and experiment with both new media and subject matter places Tim at the forefront of contemporary Inuit art. Steeped in the hunting traditions of his culture, Tim manages to seamlessly combine these images with modern social and global concerns in regards to his larger oeuvre. As such, he takes his place as an exciting new voice in contemporary Inuit art.