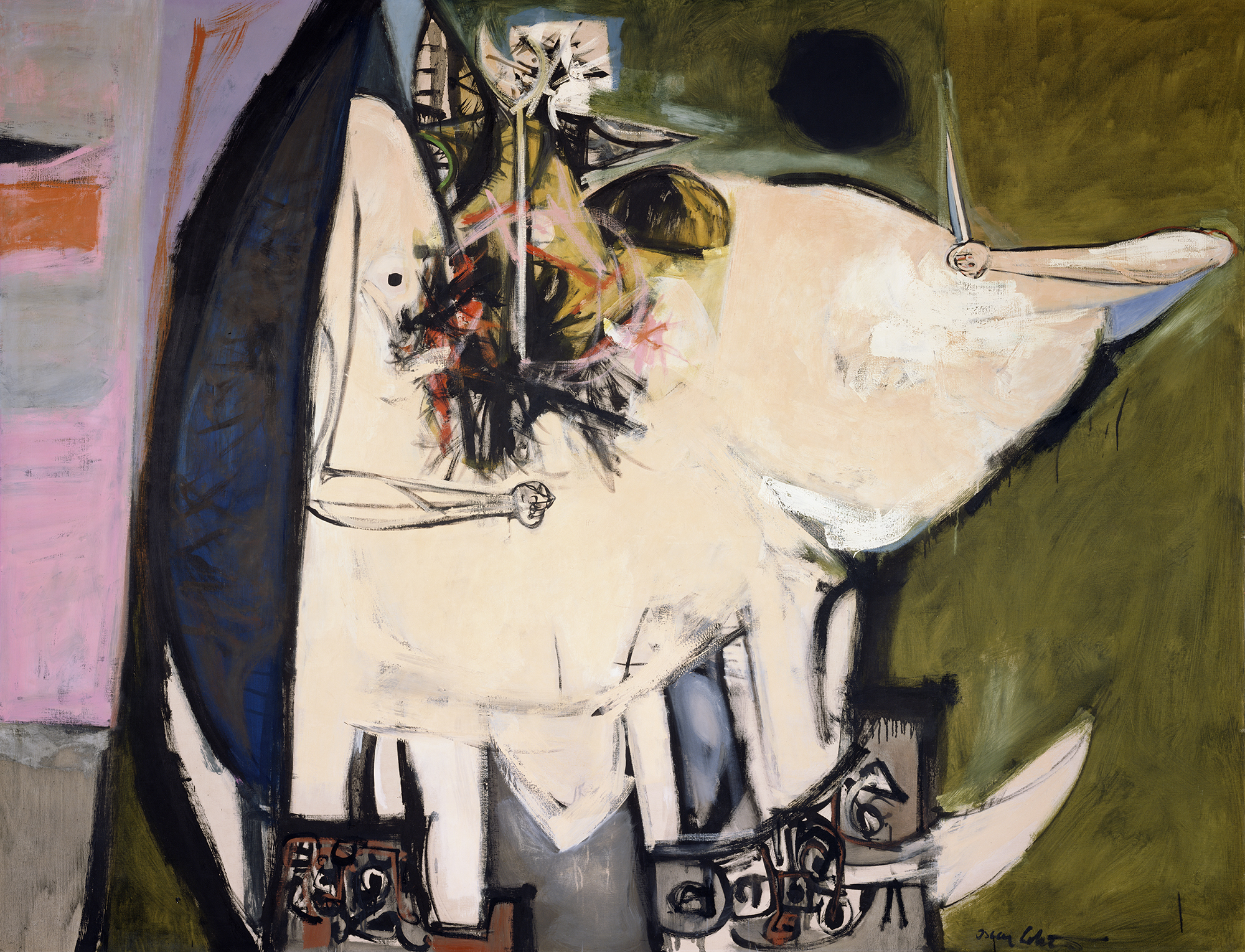 In an exciting collaborative first, Feheley Fine Arts and TrépanierBaer Gallery are thrilled to present the exhibition Discovering Oscar Cahén: The Warrior opening November 13, 2021 at Centre Space (located inside Feheley Fine Arts) in Toronto. The exhibition features an extraordinary selection of Cahén’s paintings and works on paper, some of which have not been exhibited in a commercial gallery since 1957.

The art and story of German-Canadian artist Oscar Cahén is remarkable. After arriving to Canada in 1940 as a prisoner of war, it took him only a few short years to make a name for himself as an art director, cutting-edge illustrator, and painter. In 1953, he co-founded the renowed artists’ collective Painters Eleven alongside some of the biggest names in Canadian art: Jack Bush, Ray Mead, and Harold Town, to name a few. Then at the height of it all Cahén’s career was cut short—he tragically passed away in an automobile accident in 1956.

The highlight of this special exhibition is Cahén’s monumental canvas The Warrior (1956), a rarely seen masterpiece completed just before the artist’s untimely death. The Warrior has a history with Feheley Fine Arts which traces back to Pat Feheley’s father M.F. (Budd) Feheley, a champion of Painters Eleven. “In fact, Pat’s father Budd first exhibited The Warrior in his gallery, the Park Gallery, in 1957,” says Yves Trépanier, co-Director of TrépanierBaer Gallery. The Warrior now comes full circle for exhibition once more at a Feheley-owned gallery, six decades later.

Oscar Cahén was born on February 8, 1916 in Copenhagen, Denmark. Tragically he was killed in a motor accident at the age of 40 on November 26, 1956 in Toronto, Canada. Despite the brevity of his mature career, his impact is indelibly etched upon the cultural history and art history of Canada.

Cahén was born in Copenhagen to German parents. His father, Max, a high-ranking German diplomat, became an outspoken leader and author opposing the Nazi regime. The Cahén family fled to escape capture; Oscar went to England. As a youthful German citizen, naturally he was eventually interred as a prisoner of war and subsequently sent to an internment camp in Sherbrooke, Québec. Within the camp his artistic and illustration talents caught the attention of a young reporter covering a story about the detainees. As consequence of her lobbying efforts, Cahén was released in 1942. He moved to Montréal where his advocates attained for him in 1942 a solo exhibition of his art and illustrations at the Montréal Museum of Fine Arts.

Through his inventive style and graphic flair, Cahén quickly rose to prominence to be recognized as the most frequently published, influential, and highly-paid magazine illustrator in Canada. He was a constant contributor of illustrations that graced the covers and feature stories of our major magazines such as Maclean’s, Châtelaine, Magazine Digest, among many others. Cahén’s illustrations won many prestigious professional awards.

His re-birth as a fine artist seems to have been ignited by his move to Toronto in 1944. Works of fine art again begin to appear in 1946 inspired by interest in a diverse set of artists from Rouault, Pellan, Picasso, Graham Sutherland, CoBrA, to the St Ives School and beyond. His artistic progression was meteoric and his output prodigious. After 1947, Cahén’s work was virtually never off public view, particularly at the Art Gallery of Ontario. His work was selected for inclusion in near every annual exhibition of the Ontario Society of Artists, the Royal Canadian Academy of Arts, the Canadian Society of Painters in Water Colour, the Canadian Society of Graphic Art, and so forth. In the last three years of his life, his work was included in 43 exhibitions, including: the 1953-54 Second Bienal de Museu de Arte de São Paulo, Brazil; a three-person show at the Art Gallery of Ontario; and a solo show at Hart House. His work was an integral part of the seminal 1953 exhibition Abstracts at Home at the Eaton’s store in Toronto. In 1954 he was a founding member, and some say leading force, towards the formation of Painters Eleven, the group most credited with the advancement of abstract art in Canada in the 1950s.

On November 26, 1956 Cahén gathered with artists and colleagues for lunch at the Arts and Letters Club on Elm Street, Toronto. The occasion was to celebrate the completion of massive mural projects by Cahén and York Wilson for the Imperial Oil Building on St Clair Avenue West. Following the event Cahén drove home to Oakville on a snowy afternoon in his beloved Studebaker Golden Hawk. He was struck and killed by a truck. On the Sunday following his death, Jack Bush, Harold Town and Walter Yarwood came out to the Cahén home. They inventoried, personally numbered, and recorded every work in the studio. They saw works, many of which have never been exhibited, even to this day. The adventurous directions that Cahén was following at the end of his life were radically different from the spirit and tone of the work of his 1956 contemporaries and associates in Painters Eleven. These pioneering works by Cahén changed the course of Canadian abstract painting in the late 1950s and 1960s.

Considered a seminal influence in the advancement of abstract art in Canada, the work of Oscar Cahén is in the permanent collections of the National Gallery of Canada, the Art Gallery of Ontario, and most leading art museums in Canada.