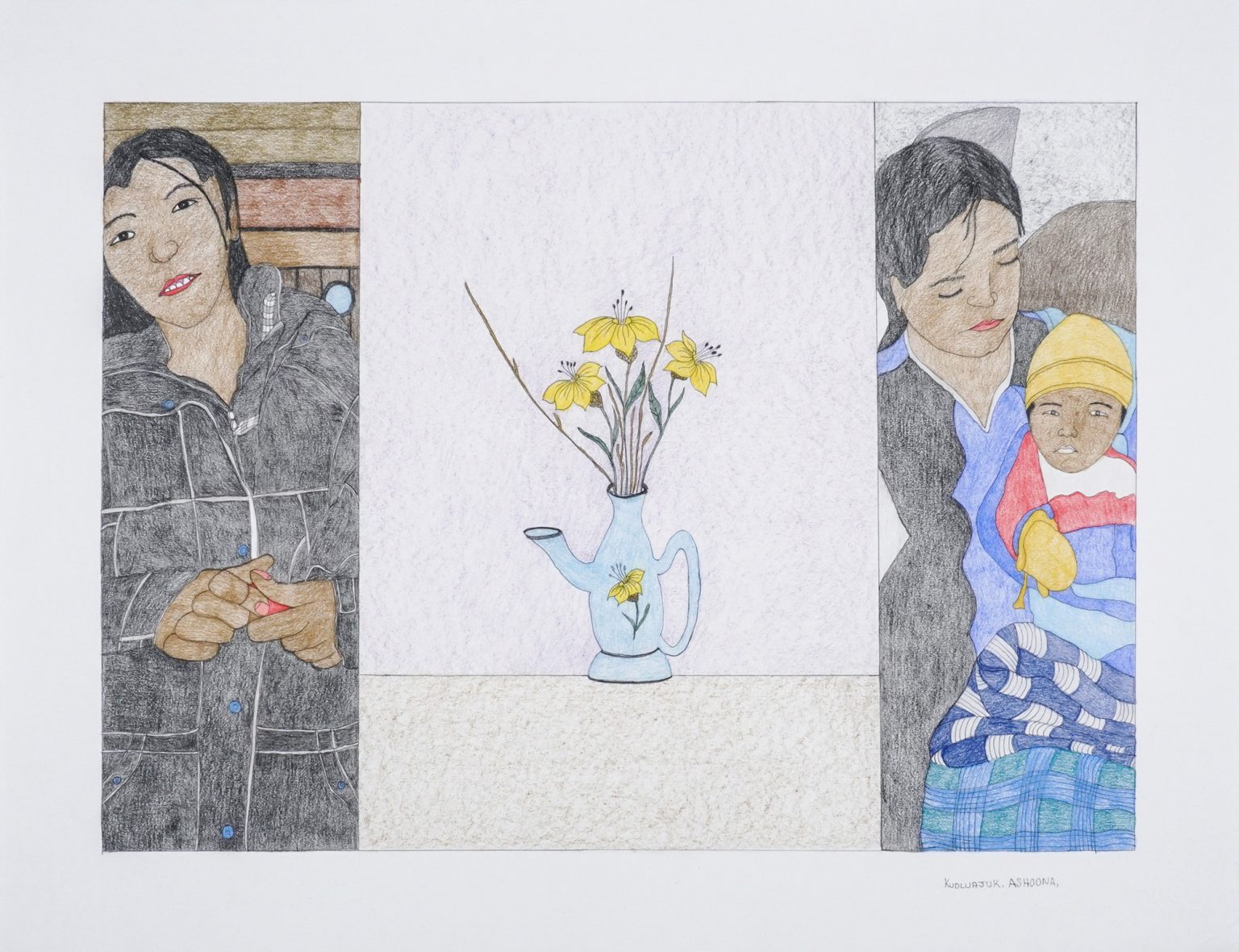 Artist Kudluajuk Ashoona began drawing in 2011 when her daughter, Nicotye Samayualie, invited her to the art studio where she regularly worked. From there, Kudluajuk went on to pursue a career in the graphic arts for nearly ten years, working primarily in drawing and sometimes printmaking. Feheley Fine Arts is pleased to present the exhibition Celebrating Kudluajuk Ashoona, where the artist’s work is accompanied by that of her two renowned daughters, Padloo and Nicotye Samayualie. The show remembers Kudluajuk’s legacy through her own drawings and that of her daughters where their reciprocal influence visibly lives on. As can be seen, all three women share an eye for capturing the extraordinary in the ordinary, each through their own individual styles.

Kudluajuk is best known for her drawings of family and community life in Kinngait. She often used photographs as reference, some as going as far back as the 1970s. Her depictions feature everything from community throat singing events to intimate gatherings around the kitchen table. Significant historical moments in Kinngait also appear, such as journalist Dorothy Eber interviewing Simeonie in the 1970s-80s, and Joe Etidlooie and Tim Toonoo smoking cigarettes while working for the Kinngait weather forecast. Their hairstyles indicate another moment from the 1970s, as do various others including a cigarette-smoking hippie, and a young man preparing his pipe underneath a psychedelic poster. For Kudluajuk, remembering her community’s history through art came with a responsibility to stay true to the source. As the artist stated, “if I do not draw what is in the photograph then I am changing it, and it would never be the same.”

Padloo and Nicotye share a similar colour sensibility to their mother Kudluajuk, who even in her greyscale works incorporate subtle touches of blue and green for realism. For Nicotye, a landscape with a uniquely crafted grey sky with yellow and purple clouds also tells a story: once, someone tried to move their across the tundra to a hunting area, but it got stuck on the way. In addition to her depictions of the Arctic landscape, Nicotye frequently features flowers in her images—a part of nature many forget exists in the North. Nicotye integrates her local landscape with a floral accents: in one piece colourful flowers emerge from a rocky underneath reminiscent of the Kinngait landscape; in another a fantasy-like sunflower sways in the wind surrounded by local rocky terrain.

In a similar vein, works by Padloo Samayualie range from isolating small details—a single feather, an old pair of figure skates—to depicting scenes of grand scale such as Toronto skyscrapers seen during her travels South, and a stone monument that sits on the Kinngait shore. Like Kudluajuk, Padloo depicts the world around her in living colour, as if viewing the world through a camera’s lens. Through her works we visualize Padloo looking up at Toronto’s KPMG building and also down into a box of artmaking tools, showing us that no subject is too large nor too small for this artist to capture. Each Padloo, Nicotye, and Kudluajuk transform every life’s most ordinary subjects, expertly transforming them into extraordinary works of art and preserving memories of a community’s past.