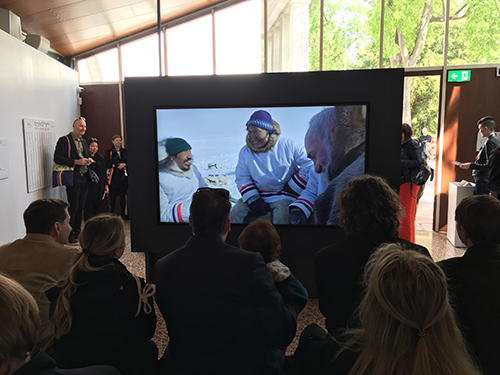 Visitors watching the first screening of “One Day in the Life of Noah Piugattuk” on day one of the Venice Biennale.

Welcome to the carnival. The 58th International Art Exhibition – La Biennale di Venezia opened today with crazy crowds and crazy art. Has the world gone truly mad? In the main “May You Live in Interesting Times” show we were “entertained” by a half-size plastic cow circling on a railway track. The gathering throngs seemed as concerned with their own style as that of the art being presented, including a woman who had sequins sewn in where her eyebrows would normally be and another carrying a purse she had painted with the words: A bag is over.

The tone of the art is too often glib and oh-so-clever – or not so clever.

The contrast with the Canadian Pavillion couldn’t be more stark. Before you enter, the clean and warm lines of the modernist Pavillion are striking, particularly since the $3 million renovation was completed with painstaking care last year.

We entered the Pavillion for the premiere screening of the Isuma Collective’s “One Day in the Life of Noah Piugattuk”. While the buzz and density of the human traffic elsewhere was all noise, you could hear a pin drop as people sat silently watching the film.

It runs for almost two hours, so our assumption was that people would drift in and out catching snippets. But no, people were transfixed. The movie is very slow, deliberate and quiet. It is stunning in its visual simplicity, with dramatic images of the white plains of snow on northern Baffin Island in the background. But most of all the haunting story, a re-enactment of the true story of the Piugattuk family being pressured into relocating into a settlement, is carried by the facial expressions of the lead character. His soul is bared as he becomes increasingly frustrated by “The Boss”, a government officer.

The other remarkable tension in the film is delivered by the character who translates for “The Boss”. You can watch him alter the substance of the conversation to try and find some common ground, sometimes misstating the benefits of moving to the settlement.

Not to spoil the movie, but the final harrowing piece shows the real Noah Piugattuk being interviewed by the collective back in the 1990s.

In a broader context, the choice of the Isuma collective and its choice of subject matter was a brave choice. Not many countries are willing to expose their darkest chapters in an international showcase. That honesty and the extraordinary sincerity of the work itself are nothing short of heroic.

Speeches during the opening ceremony of the newly renovated Canadian Pavillion following the film’s premiere.

Following the initial screening, the opening ceremony for the Canadian Pavillion gave several of the people behind the scenes a chance to talk about the project.

Sasha Suda, the new Director of the National Gallery of Canada, which oversees the selection of the artists, stated that: “None of this would have been possible without their courage.” She went on to say that they were “selected for their vision”, as part of an effort to extend a “global Indigenous conversation.”

We returned to the Pavillion later to watch Zacharias Kunuk of Isuma hosting a discussion via satellite with elders live on the edge of an ice flow where the film’s story takes place. The subject of the conversation was the threat posed by mining on northern Baffin Island.

One of the elders reflected: “When the ships started coming up, our animals were very scared. Our people are very naïve… We need results before it’s too late.”

The Isuma Collective’s exhibition at the 58th Venice Biennale Arte has its official opening on May 8th. The Pavillion is open to the public from May 11-November 13, 2019