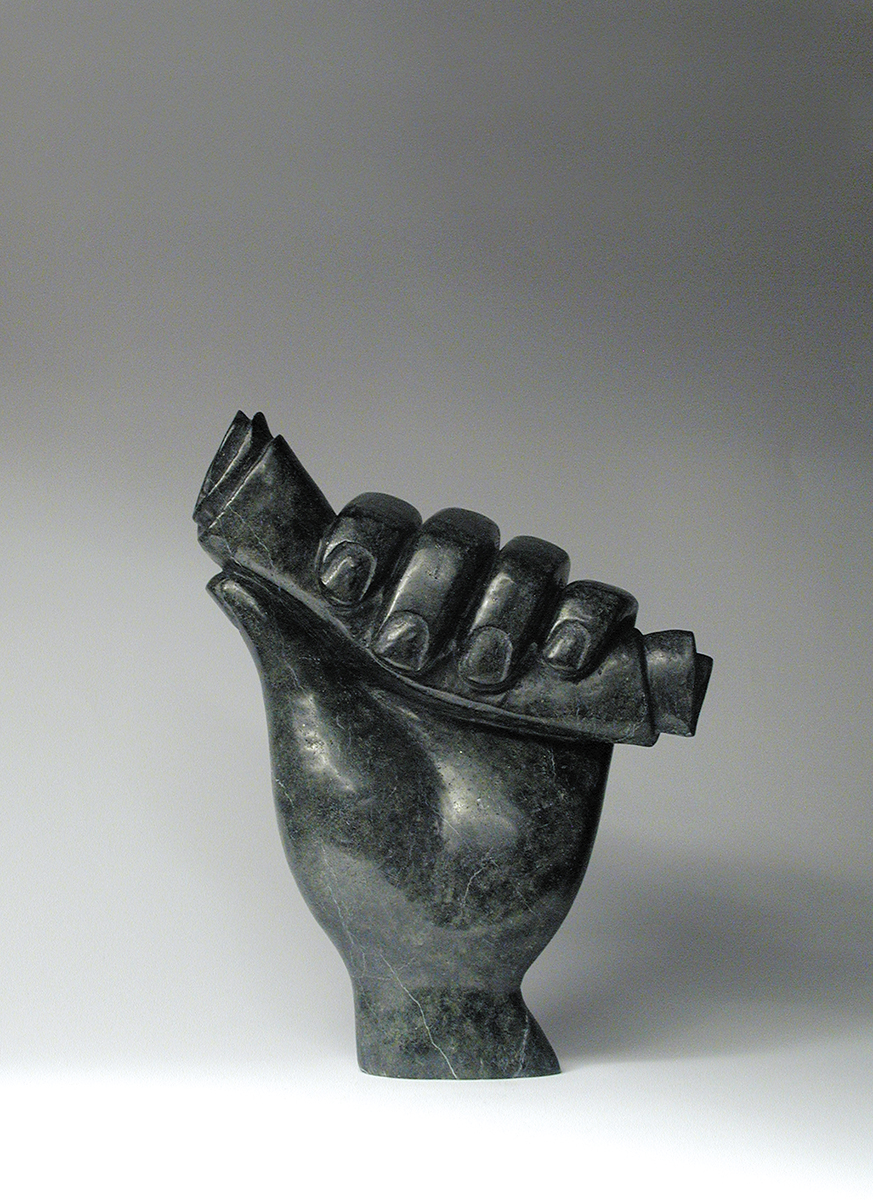 At the dawn of the twenty-first century, some people might question the necessity of another exhibition devoted to the artistic expression of Inuit women. Surely, they would say, the point has been well made in over twenty group exhibitions (and even more solo exhibitions) of Inuit women’s art since the mid-1970s in galleries across North America.

And yet, reviewing broad exhibition statistics, it becomes apparent that not so much has changed in the intervening years, as women continue to occupy a disproportionately small place among the recognized arts of the Inuit. Over the past dozen years Feheley Fine Arts has featured many women artists in solo exhibitions including Pitseolak Ashoona, Sheojuk Etidlooie and Mayurcak Ashoona. However, our group shows are still largely filled with the art of Inuit men; rarely more than one quarter of the work in any sculpture exhibition is created by women, and graphics exhibitions manage only slightly better odds.

Much has been written elsewhere about formative years of contemporary Inuit art, when men (‘spatially-oriented hunters’) embraced the three-dimensionality of carving while women (‘traditional clothing-makers’) gravitated toward flat sheets of drawing paper or produced cut felt forms for wall hangings. Artists such as Kenojuak Ashevak, Helen Kalvak and Jessie Oonark emerged from this era as the forerunners of excellence in Inuit graphic art. Today we look to emerging artists such as Shuvinai Ashoona, Meelia Kelly and Gloria Putumiraqtuq to gauge the tempo of change in the best of recent Inuit prints, drawings and wall hangings.

We have a tendency these days to claim that the old biases no longer hold —  that there are as many female sculptors as male. This is wishful but inaccurate thinking! Our recent exhibition statistics reflect a significant reality: Inuit women still do not carve as often as men, although graphics and textile arts have remained the domain of women.

When asked, women like Omalluq Oshutsiaq explain that being a busy wife and mother interferes with time for art-making. Pitaloosie Saila has many words of wisdom on the subject: drawing is enjoyable, but there are too many distractions and interruptions at home; the younger generations, caught between the traditional and the modern worlds, need resources and encouragement to ensure success. Oviloo Tunnillie has acknowledged that being one of only a few women carvers in Cape Dorset can be hard. lt is her work ethic that has kept her going. 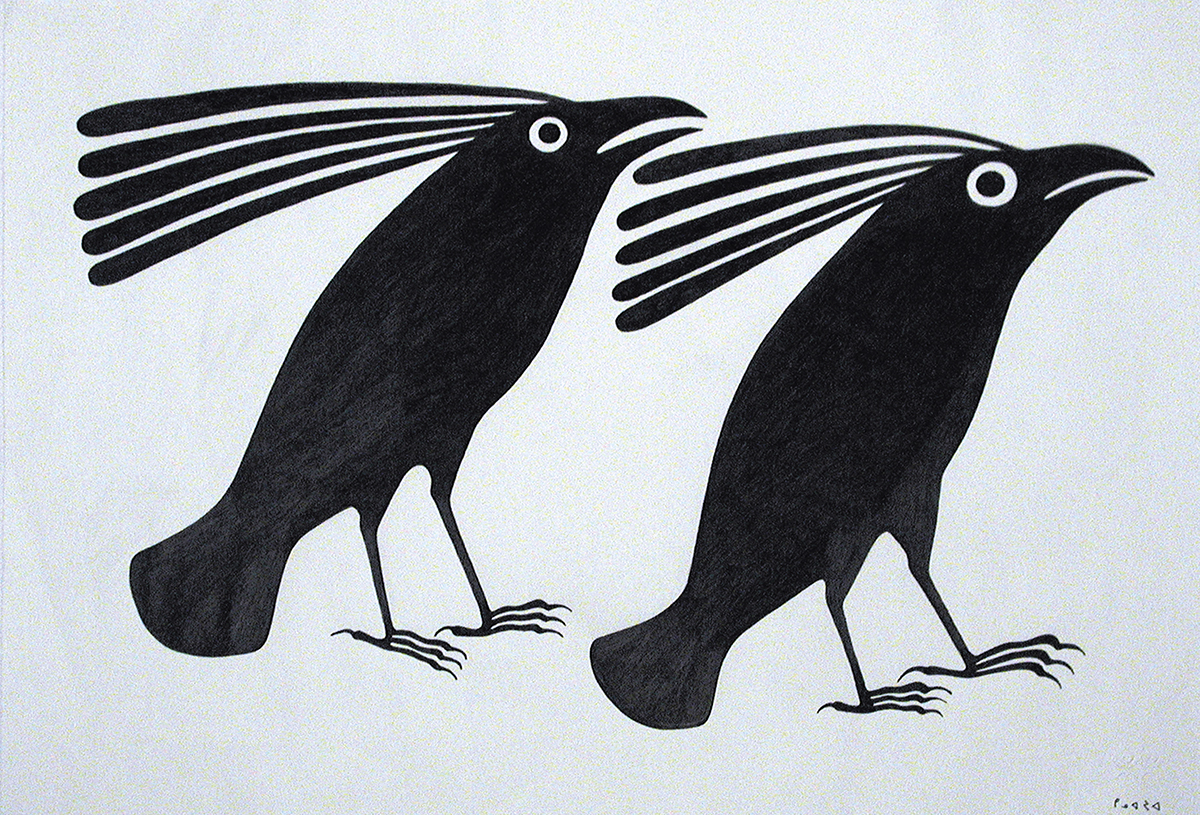 As we lose the older generation — women like Joy Hallauk, Elizabeth Nutaralu and Mary Pudlat — who is rising to fill their large shoes?

This exhibition is presented both as a tribute to those women who have laid the artistic groundwork, and as a call to arms for the Inuit women artists now rising through the ranks.

Kenojuak is the most acclaimed Inuit artist today. She was named a Companion to the order of Canada in 1982, received a Lifetime Aboriginal Achievement Award in 1995, and was given a star on the Canadian Walk of Fame in 2001, among numerous honours. Her artistic career spans more than forty years, during which time she has drawn continuously, and carved less frequently. Hundreds of prints have been made from her images of birds and female faces, always emphasizing the motifs of nature (leaves, feathers, seaweed) and placing design above concerns for realism. Her steady hand traces a fluid line where positive and negative space interact.

Raised by her grandmother after her mother’s death, Irene’s wall hangings and drawings are peopled with the spirits that she heard about in her grandmother’s stories. Irene began creating

Wall hangings in 1970 for Jack Butler and Sheila Butler. The framing borders are filled with the faces of spirit helpers who guard travellers out on the tundra. Irene describes that the borders take on the colours of the hour: yellow for daylight; red for sunset; blue or black for the deep of the night.

Elizabeth is perhaps most famous for her appearance as the carver on the cover of the “Canadian Inuit Sculpture” brochure distributed until recently by the Government of Canada. Her daughter, Mary Ayaq Anowtalik (wife of Luke) continues the carving tradition. 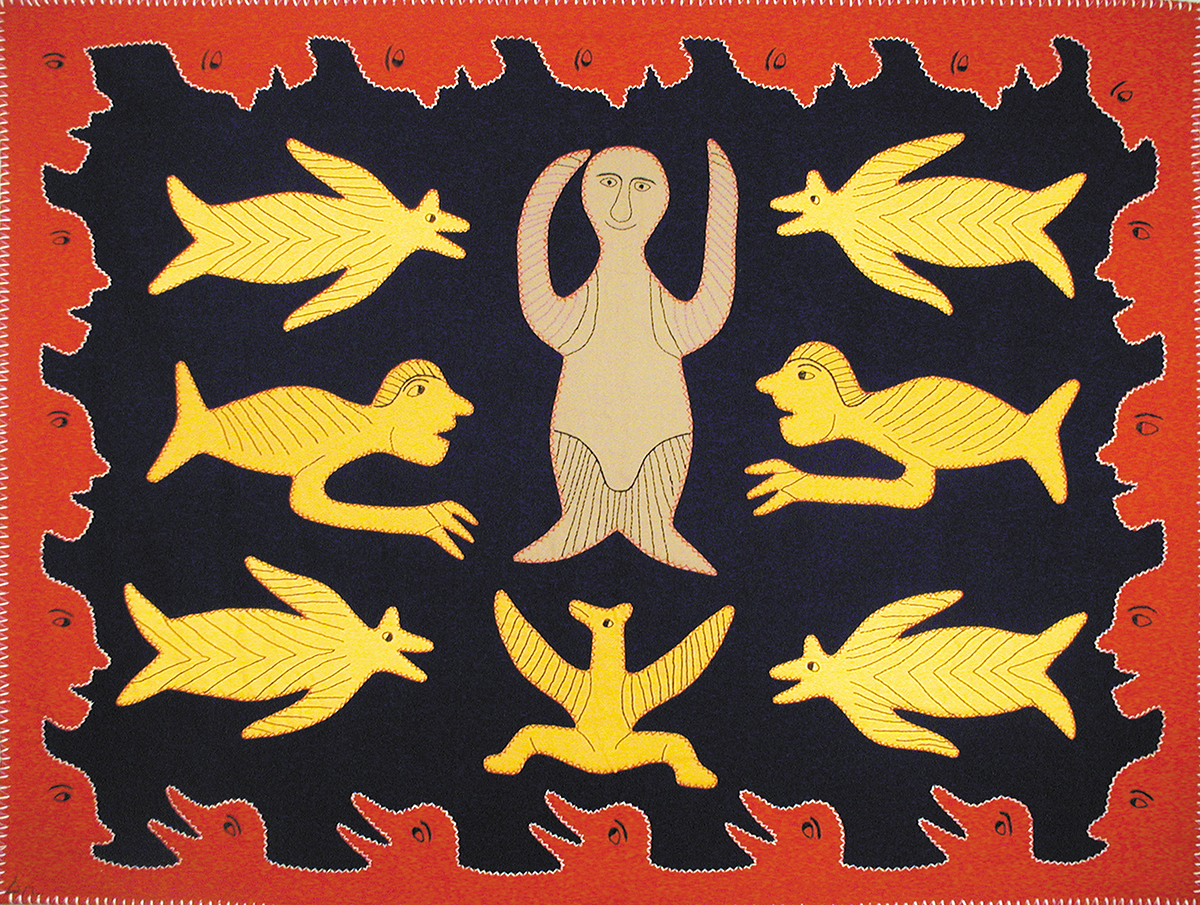 Lucy was the wife of Tikituk Qinnuayuak and the aunt of Kenojuak Ashevak. Lucy was one of the early participants in the art programme in Cape Dorset, quickly finding fame for her images of birds and of women engaged in traditional activities. Over the years, more than 130 prints were made from her many distinctive drawings.

Joy was a respected Arviat artist known for her carvings of stylized face and figure groupings. She was the sister-in-law of carver Andy Miki.

Originally from Arctic Quebec, Mary moved to Baffin Island in the early 1940s and lived with her family on the land. In the early 1960s she settled in Cape Dorset and quickly became an enthusiastic participant in the art programme. She carved occasionally, however the majority of her work was drawings and prints of a wide range of subjects.

Maudie is a carver from Taloyoak who began working in bone and stone in the late 1960s. She notes that the shape of the stone provides inspiration for her compositions filled with distinctive transforming spirit figures and supernatural creatures.

Napachie was initially influenced by the artistic force of her mother, Pitseolak Ashoona. She rarely sculpts, yet Napachie has  worked  on  thousands of drawings since the late 1950s. Many prints have been made over the years from  her  narrative  images of personal and historical events of daily life in the Arctic. Her most recent works on  paper are her most confident to date — filled with ethereal sea spirits and dramatic linear accents.

Mary is the daughter of Omalluq Oshutsiaq. Her mother encouraged her to make a living as a sculptor, and taught her the basics while she was still quite young. Her favourite theme remains the mother and child, likely the influence of her mother’s carvings, however in recent works Mary has shown an encouraging creativity in her choice of subject matter.