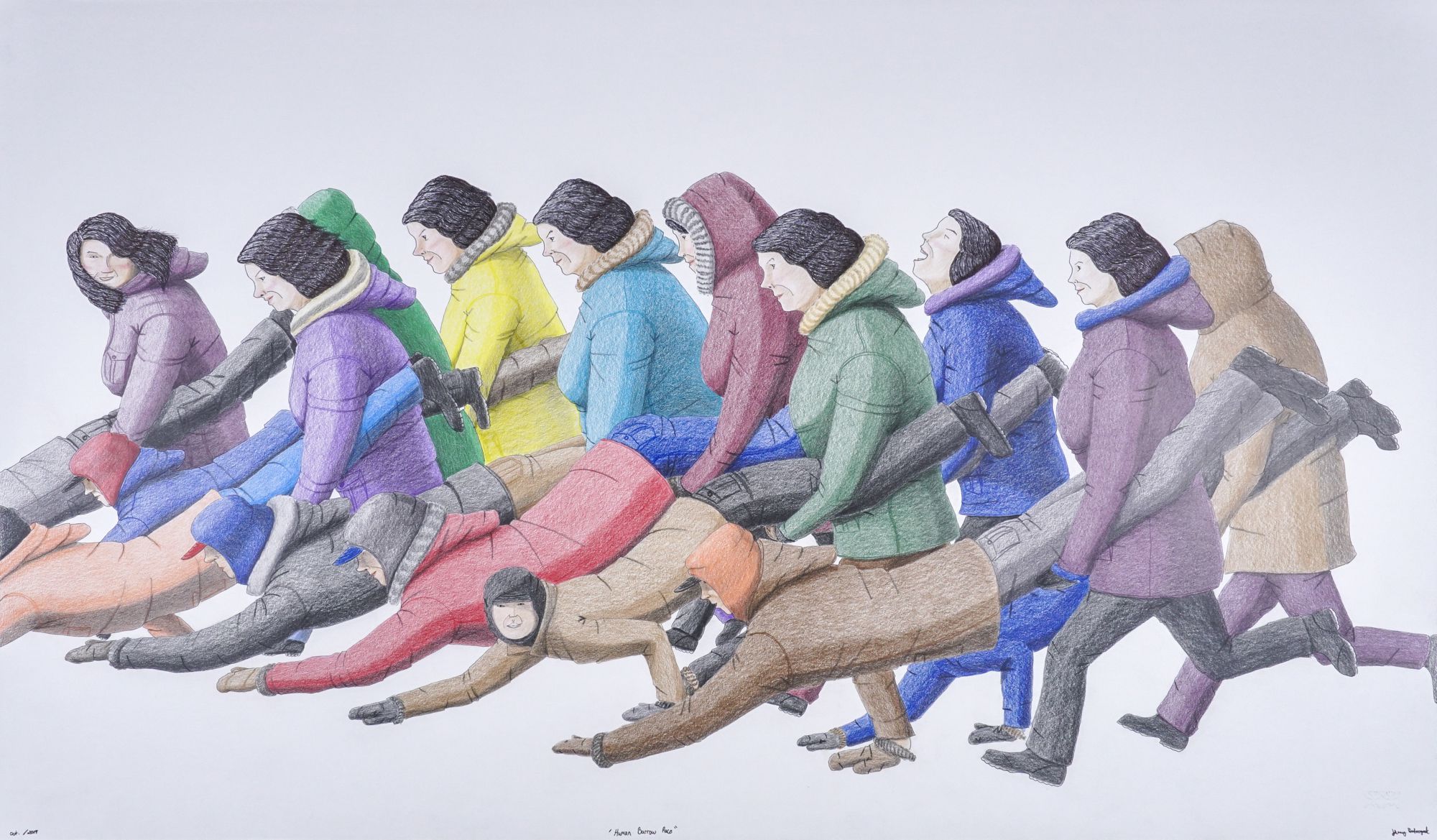 Drawing can serve as a vehicle for memory. Some artists use drawing to recollect moments from the past, while others utilize the medium to investigate feelings or even re-imagine events. The use of memory as a source of reference, rather than the commonly used photograph or preliminary sketch, leaves space for the artist’s interpretation—leeway for creativity and imaginative elements; the infusion of humour and wit, or even poignance and self-reflection. Drawing from memory leaves space that allows creative freedom to thrive. This is how Johnny Pootoogook approaches much of his work.

Pootoogook’s drawings in Views from Home capture the scenes and subjects from his hometown of Kinngait, Nunavut in vivid colour and thoughtful detail. Remarkably, Pootoogook conjures most of his scenes from memory, using photographic reference for only a select few drawings (such as Town View, 2019, a nocturne view of Kinngait depicted with such painstaking detail that photographic reference was quite necessary). Most of Pootoogook’s drawings recollect contemporary life in Kinngait as viewed from his own perspective: a man taking the skidoo out on the land; a hunter quietly eyeing caribou on the tundra; the rear-end of someone collecting clams at the shore at low tide cheekily titled Full Moon at Low Tide (2011). Many of Pootoogook’s figures are depicted from behind, facing away from the viewer and none are meant as self-portraits or depictions of specific people [1]. Rather, they are representative of communal memories, re-imagined by the artist through the media of coloured pencil and ink.

The drawings in Views of Home, Pootoogook’s first solo exhibition, span nearly a decade of the artist’s career and represent two particularly prolific times in his life: 2010–2011 and 2018–2019. But Pootoogook had begun drawing long before 2010. Born in 1970 to artist parents Shooyoo (1937–d) and Kananginak Pootoogook (1935–2010), he started drawing in the 1990s under his father’s instruction, who was then teaching a course at the co-op studio in Kinngait. [2] Pootoogook had two prints included in the Annual Cape Dorset Print Collections in 1992 and 1993, respectively. He also pursued a carving practice after having learned the skill during childhood. [3] 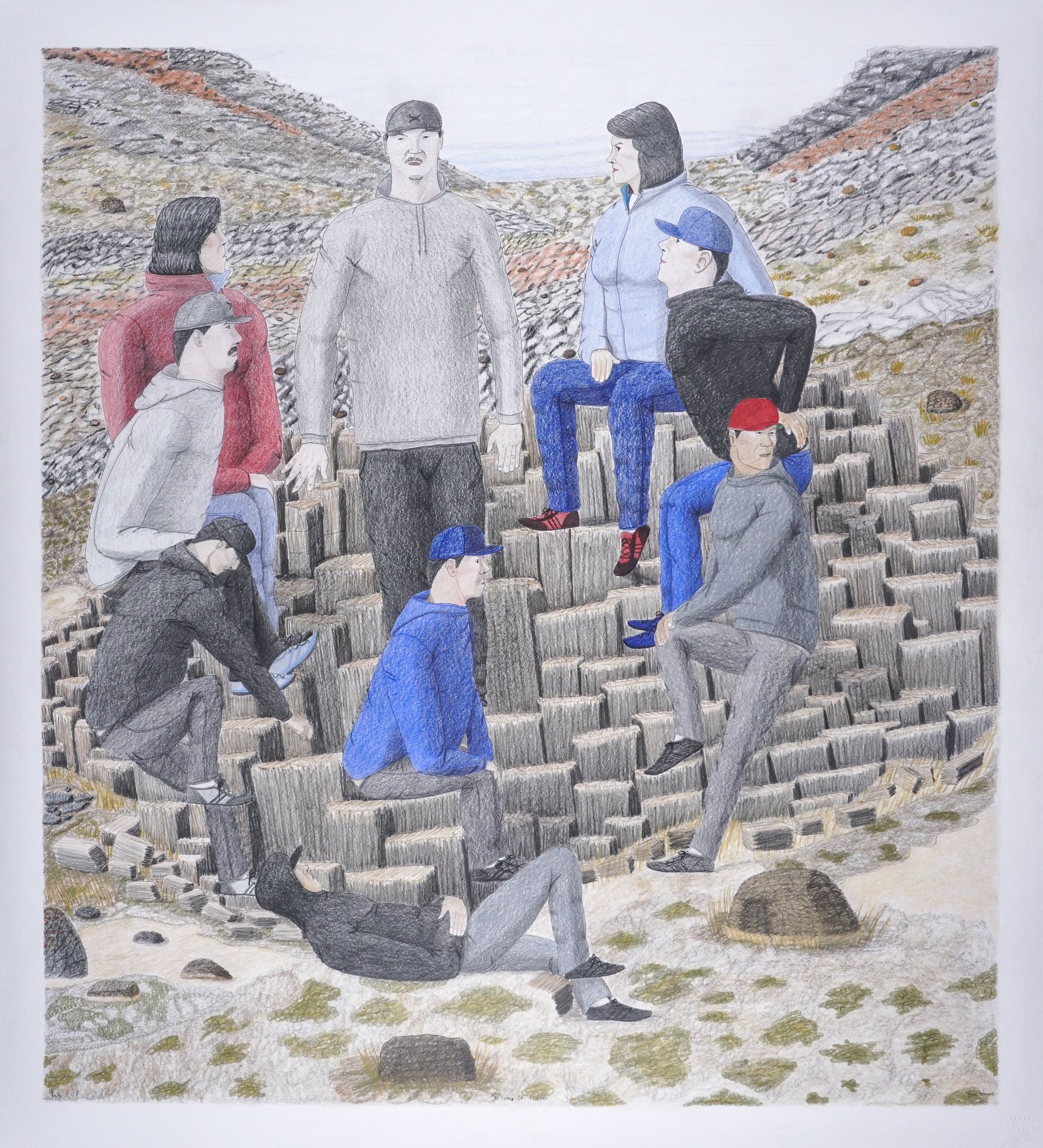 The death of Pootoogook’s father in 2010 spurred him to seriously pursue drawing again to continue the family’s artistic legacy. [4] His drawings from this period are primarily medium scale works on the then-standard 20 x 26 inch sized paper used at the Kinngait Studios (with the exception of his monumental piece Composition (Boat), 2010, measuring at 46 x 88 inches). These images recall various aspects of community life, including his own re-imagining of the 2009 bowhead whale hunt, Kinngait’s first legal hunt in more than 100 years. [5]

After a hiatus, Pootoogook picked up drawing once again in 2018 after the opening of the new Kinngait Studios facilities at the Kenojuak Cultural Centre. There, the expanded studio space there inspired him to revisit drawing on a large scale. He also approached his human and animal subjects with the same exquisite detail he practised early ten years prior, now with a renewed sense of vibrant colour. Meticulous renderings of birds pay homage to Pootoogook’s father who was referred to as the “Audubon of the North” for his expertise in depicting bird anatomy. Like father like son, Pootoogook’s bird drawings are nothing short of extraordinary. With Kananginak Pootoogook’s anatomical precision and his own dynamic twist on composition, Johnny’s Pootoogook’s birds are full of life as they glide, sway, and dart—from all angles and perspectives.

Perspective, in the figurative sense, changes over time as well. Pootoogook’s drawings of community group activities, like the casual hangout remembered in A Group of Friends (2019), and the humorous festivities pictured in Christmas Games (2019), were scenes drawn from recent memory at the time. Now living through a world-wide pandemic, these memories of group activities and games seem more distant than ever, as is the case in Kinngait and most of the world. Seen through this lens, Pootoogook’s drawings serve as remarkable reminders of how time shifts perspective on memories, and how integral art can be to the preservation and re-thinking of memories.