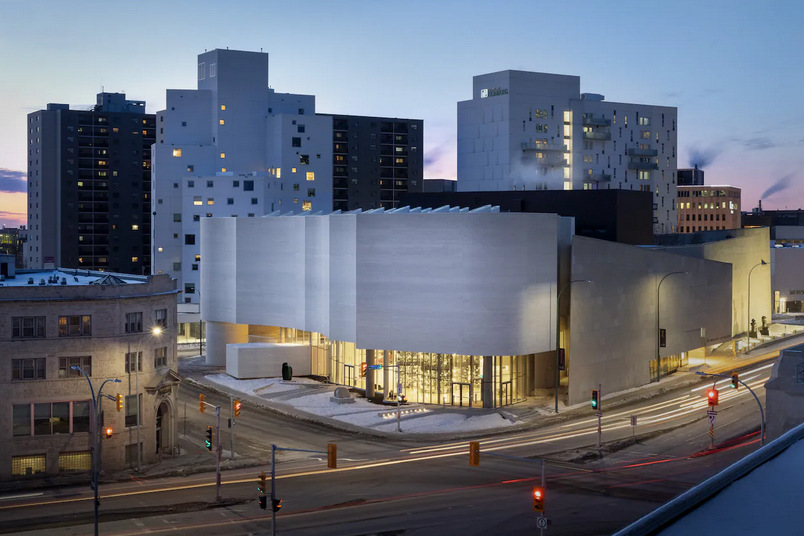 The much-anticipated new centre for Inuit Art is now open at the Winnipeg Art Gallery. Thoughtfully named Qaumajuq [kow-ma-yourk or how-ma-yourk], meaning “It is bright, it is lit” in the Nunavik dialect of Inuktitut, the centre is hailed as the first-of-its-kind as home to the largest public collection of contemporary Inuit art in the world. The gorgeous new building is 40,000-square-feet with a sleek, undulating white stone exterior that emulates the vast expanses of the landscapes of the North. Together with the WAG, Qaumajuq co-houses over 14,000 works made by Inuit artists.

Hosting a grand opening during pandemic times poses its own logistical concerns, but Qaumajuq did an exceptional job taking it online. They organized a two-night virtual opening extravaganza on March 25th and 26th which featured talks from curators, a tour of the collections and inaugural exhibition INUA, performances, and special remarks from various politicians, artists, curators, and community figures. Pat was honoured to have been invited to give her remarks which were featured in the Qaumajuq Virtual Opening Part II (Pat’s remarks start at 1:07:10)

Qaumajuq’s inaugural exhibition Inua (“spirit” or “life force” in Inuktitut) is a show not to be missed. It brings together over 90 Inuit artists from across Canada, both North and South-based, as well as some circumpolar Indigenous artists. It was also curated by an all-Inuit curatorial team. Many artists represented by Feheley Fine Arts are included in the show including Niap, Michael Massie, Mark Igloliorte; and artists with upcoming exhibitions at the gallery include Darcie Bernhardt and Bronson Jacque.

The WAG holds one of the largest collections of Inuit art in the world and Qaumajuq finally provides the space and attention that Inuit art, both and old and new, deserves. More works from the permanent collections and those on long-term loan can be seen on display in their “visible vault” – an undulating glass case that can show up to 5,000 sculptural works at once time.

We are thrilled for Qaumajuq and cannot wait to visit in the future!