In collaboration with our friends at First Arts, we are pleased to co-present the exhibition Etching and Aquatint: Free Flowing Experimentation. The show features a selection of outstanding prints that showcase the progression and innovation of the etching and aquatint technique since it was introduced to Kinngait Studios in 1993. Works are available for viewing at Feheley Fine Arts Tuesday to Saturday from 11 am – 6 pm, or by appointment. 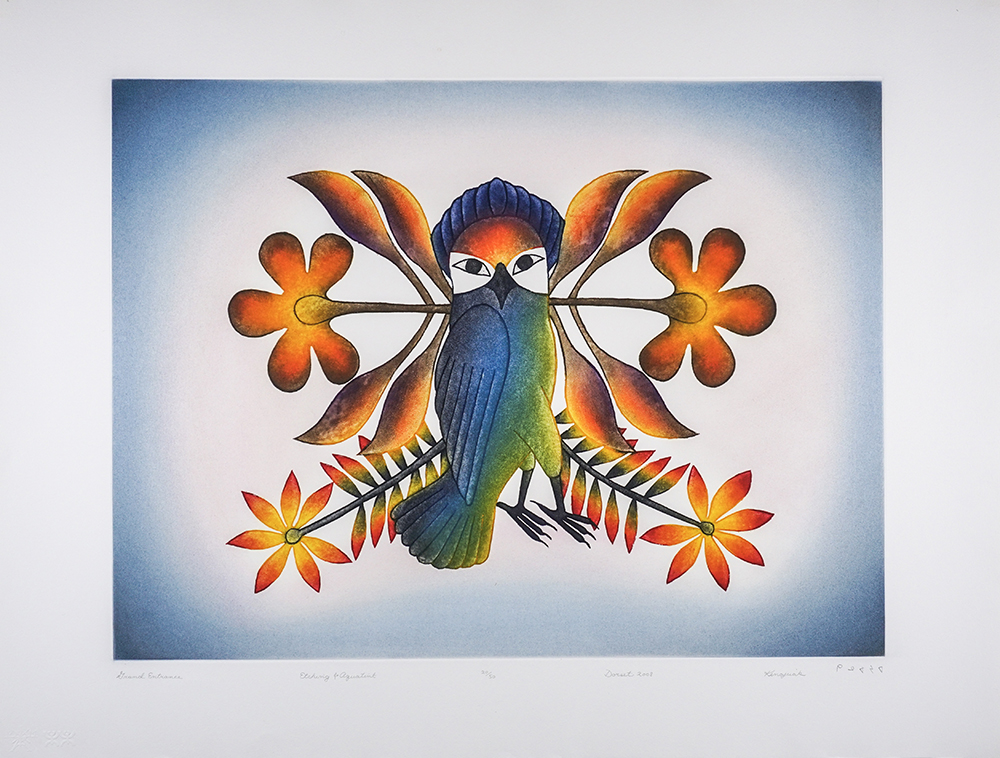 Paul Machnik and his world-renowned Montreal-based print atelier, Studio PM, began collaborating with the Kinngait Studios artists more than twenty-five years ago. The introduction of the etching and aquatint technique was game changing, rejuvenating the monochromatic etching medium which artists had dabbled with in the early 1960s and again in the 1970s. The difference between the early etchings and Machnik’s etching and aquatint is two-fold: first, Machnik uses steel plates allowing for a more tonal quality than the copper plates which artists had used in the past. Secondly, the addition of hand-applied colour directly onto the plate (à la poupée) gives the prints an unprecedented luminosity. The introduction of the new technique was also an opportunity for artists like Sheojuk Etidlooie and Kenojuak Ashevak to experiment beyond previously set limits, etching images directly onto the plates and eventually experimenting with hand-painting techniques. This selection of prints from Kinngait (Cape Dorset) represents more than twenty-years of artists working in this medium—from the very first time etching and aquatint was featured in the annual print collection of 1995, to the works of more recent years.

The History of Etching and Aquatint

Printer Paul Machnik had been trying to convince Terry Ryan, general manager of the Kinngait co-operative, to send him up north to experiment in the Kinngait Studios for years.[1] Finally, after knocking on the door of Ryan’s then-office in Toronto’s Cabbagetown around 1993, Ryan obliged with the words “go and see what you can do.” [2] For the next 26 years Machnik would go north—first once a year then once every other year—to print and facilitate workshops with the artists. The facilities for producing etchings and engraving pre-existed at the studios, but by the time of Machnik’s arrival in 1993 had long been defunct and it took about a week to get things up and running. During that time Machnik was also given access to the drawing archives to gain insight into who was doing what. However, the goal for these prints, as remarked by Machnik, was not to replicate images but rather to create something entirely new directly on the plate. 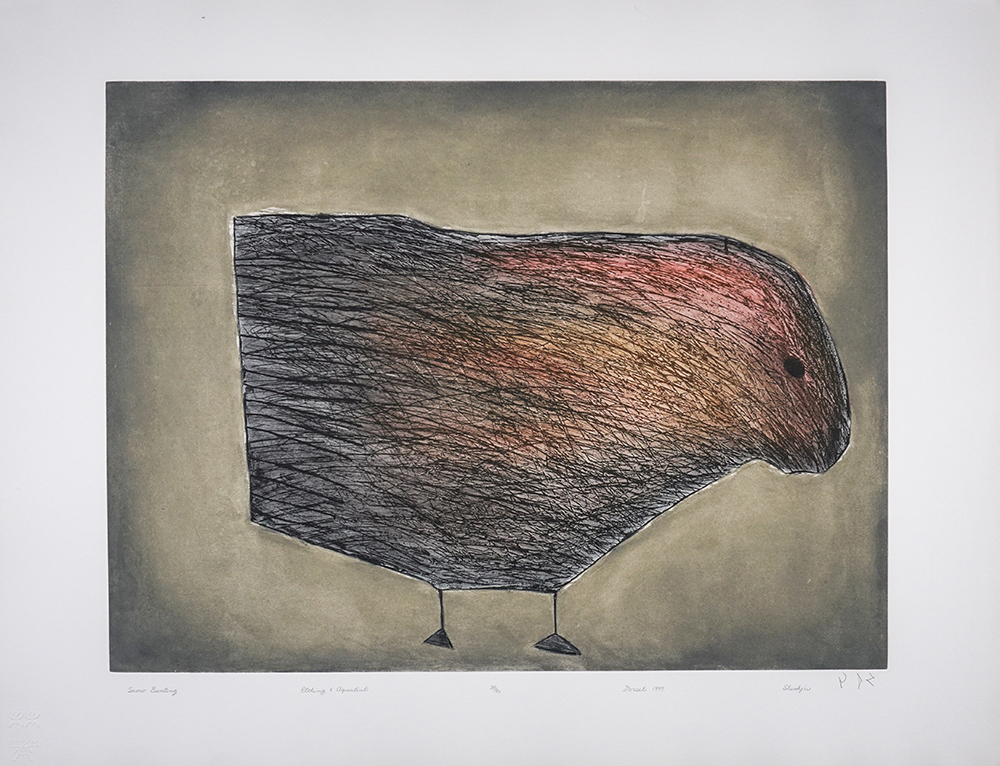 The artists began working directly on the steel plates which were etched in Kinngait, then sent to Montreal for printing at Studio PM. Sheojuk Etidlooie and Kenojuak Ashevak were among the first artists that Machnik worked with in the early experimental days. There were no expectations; just free flowing experimentation. Several editioned prints came out of the first experiments and were released in the 1995 collection. These early prints were Etidlooie’s Bear’s Head, Qavavau Manumie’s Spring Caribou, Kenojuak Ashevak’s Ravens Gather which was the 1995 cover image; and a print titled Raven by Kananginak Pootoogook.

Working with Etidlooie was particularly memorable for Machnik. Her career was short but prolific and she was an artist very much open to experimentation. Machnik recalls running a workshop with women from the community who would often giggle and whisper to each other in Inuktitut during sessions. He later learned they were mocking Etidlooie’s more abstracted images, which, of course, upset the budding artist. Machnik then set up a private room for Etidlooie to work away from the whispers, and there she became prolific producing up to three or four images per day. [3] Etidlooie’s etching and aquatints would then go down in Kinngait printmaking history as some of the most distinctive and highly coveted prints ever made by an Inuit artist. She continued work enthusiastically until her sudden passing merely three years later in 1998. 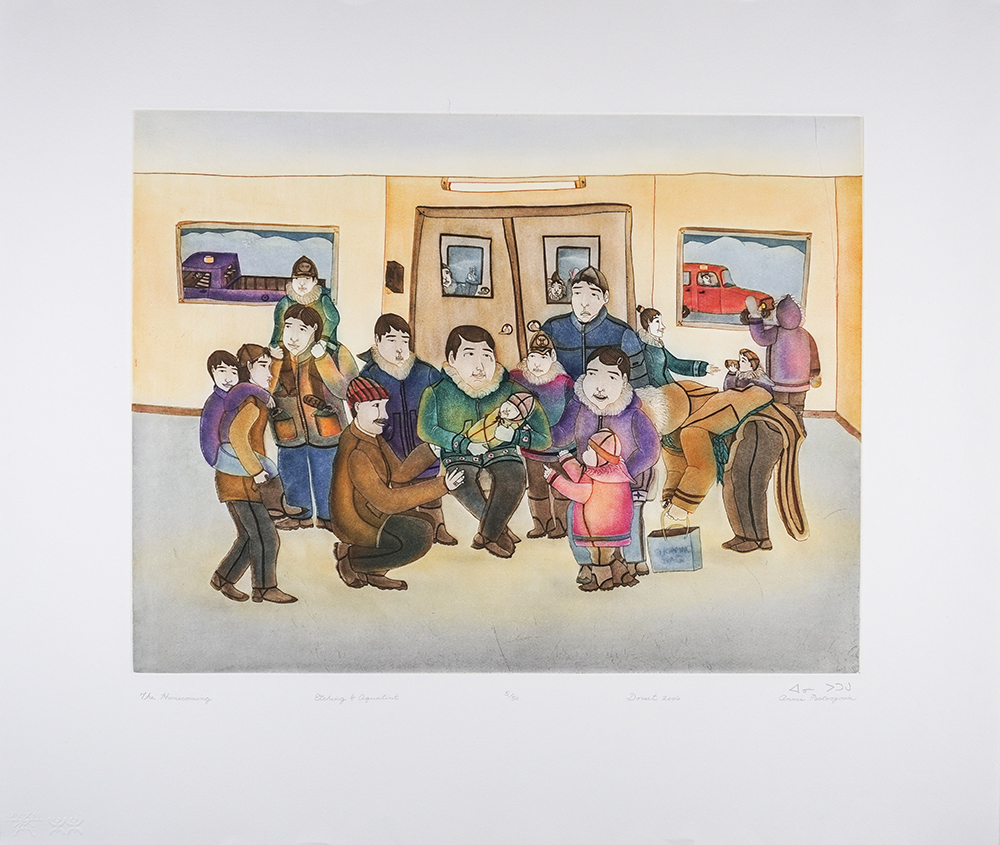 Over the years more artists ventured into experimental territory. Kenojuak Ashevak and Pitaloosie Saila were among the first to try the sugar-lift technique, involving painting directly onto the plate’s surface rather than etching. The result was unlike anything that had ever come out of the studios before: etchings with a fluid painterly quality. Ashevak’s sugar-lift prints were so remarkably different from her usual prints that it was initially thought that the market would resist the work, and they almost did not get to see the light of day. But with the help of persistent dealers and collectors who championed innovative work coming out of the studio, the prints were eventually approved and subsequently wowed audiences in the south. [4]

Between 1993 and now, Machnik has made an indelible mark on the Kinngait Studios and the annual print collections. He notes Jimmy Manning as being instrumental to the ongoing success of the printmaking technique in the north, providing his consistent support during Machnik’s early years. Today, the printmaking technique continues into the 2020 collection where nine etching and aquatint works are represented by a mix of new and old generation artists who explore the medium through their own distinctive subject matter. The longevity of the medium and the way that it has enhanced many artist’s images is undeniable. We look forward to what is to come and continue to appreciate these great works from the past.